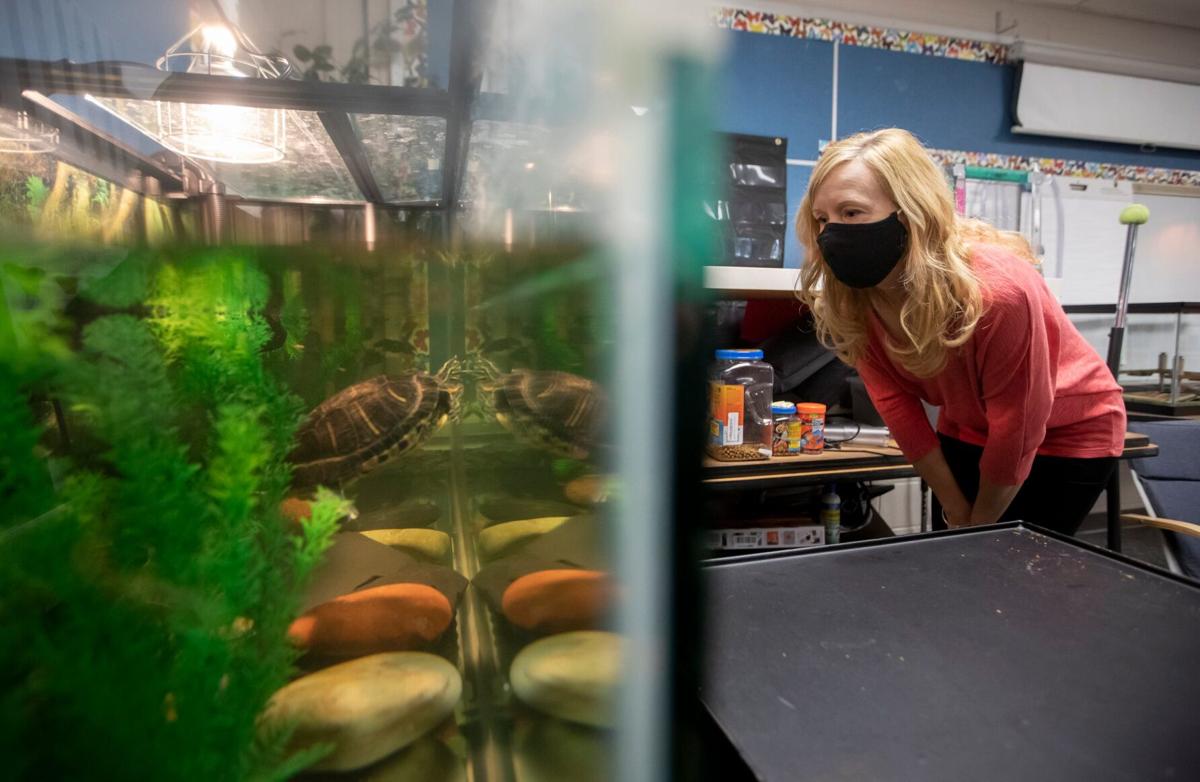 Katie Guehl, a fourth grade teacher at Indian Run Elementary School in Dublin, looks in on Daphne Phyllis, a red-eared slider turtle, inside her classroom earlier this month. 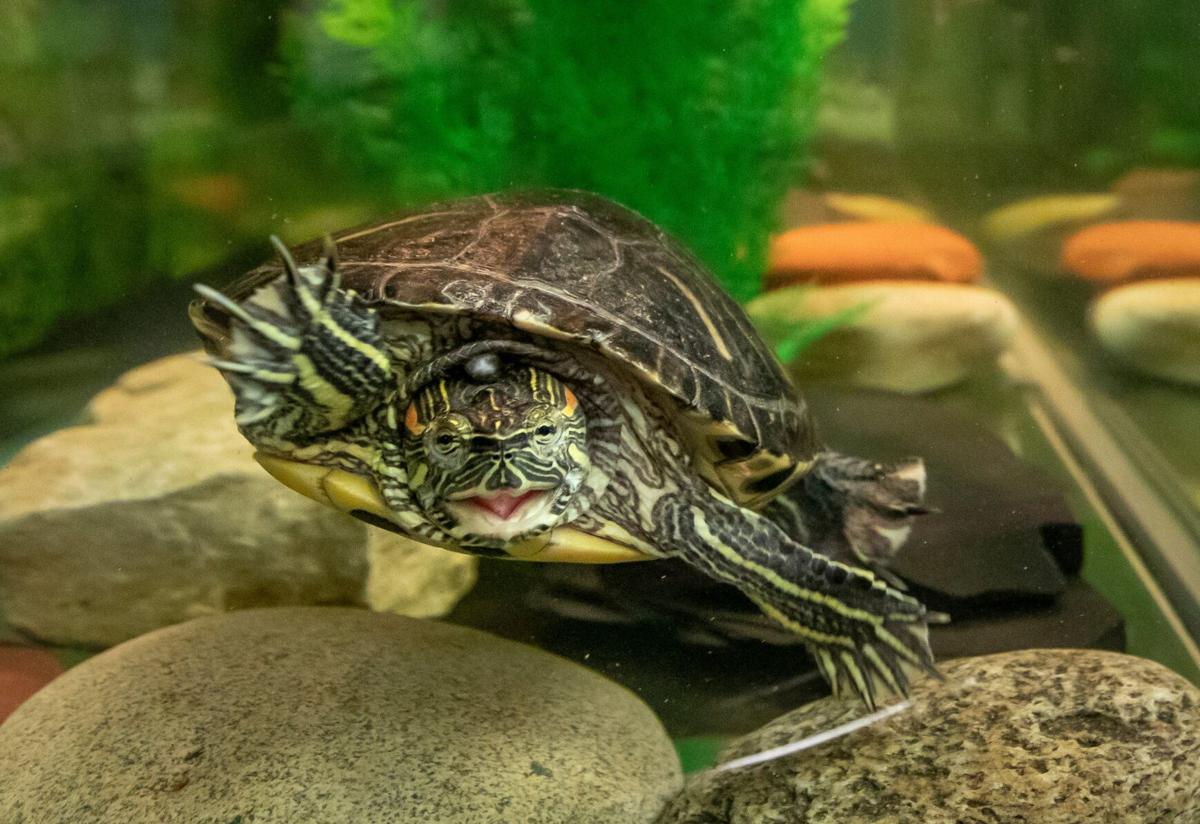 When schools around the country shut down due to COVID-19, teachers had to figure out what to do with their classroom pets such as Daphne Phyllis, a red-eared slider turtle that is pictured here.

Katie Guehl, a fourth grade teacher at Indian Run Elementary School in Dublin, looks in on Daphne Phyllis, a red-eared slider turtle, inside her classroom earlier this month.

When schools around the country shut down due to COVID-19, teachers had to figure out what to do with their classroom pets such as Daphne Phyllis, a red-eared slider turtle that is pictured here.

COLUMBUS, Ohio — As teachers pivoted to online learning last school year, some faced a unique challenge: What would happen to their class pets?

Central Ohio teachers scrambled to find surrogate homes for their turtles, bearded dragons and other class pets last spring and, in some cases, again over the summer.

“Those are some of the pandemic things people don’t think about,” said Katie Guehl, a fourth grade teacher at Indian Run Elementary School in Dublin.

She has had her class pet, Daphne Phyllis, a red-eared slider turtle, for almost 20 years.

“She is a little staple,” Guehl said of the roughly 25- to 30-year-old turtle named by her students after studying mythology. “The kids know her and … are excited to befriend her. They may not remember my math lesson at the end of the day, but they’ll remember feeding the turtle.”

When COVID-19 shuttered schools in March 2020, Daphne Phyllis went between the houses of two students during the spring and summer months.

Guehl, who is still teaching students remotely because of parent requests, brought Daphne Phyllis back to the classroom this past fall and starts every school day by wheeling her laptop on a cart right up to the tank.

“Class pets are definitely more fun when you have the children in the room,” said Guehl, who has been teaching for 24 years.

Tortoise on the loose

When schools closed last spring, Rich Ladowitz, a biology and environmental science teacher at Reynoldsburg High School, remembers thinking, “What are we going to do with Mya?”

Ladowitz bought the 5-year-old Russian tortoise at the Hilliard Fairgrounds four years ago to bring into his classroom. When the COVID-19 pandemic struck, Reynoldsburg senior Casey Lichtner volunteered to take Mya home with her.

“I thought she was really cool and interesting,” said 18-year-old Lichtner. “I like pets a lot. So I was like ‘Why not have a tortoise for a couple of weeks?’”

But what she thought would be a couple of weeks turned into a couple of months as the pandemic wore on.

“I was still happy to have her,” Lichtner said. “She’s pretty low maintenance. You just feed her a couple of times a day and let her out.”

Ladowitz took Mya back in June and accidentally lost her that first week. He went on a run and put the tortoise on the porch so she could walk around, but she was gone by the time he got back. Five hours later, he discovered that Mya had walked across the street and into a neighbor’s yard.

“Everyone gets this impression that tortoises are extremely slow, but they are methodical,” Ladowitz said. “They will just keep going and going.”

Ladowitz moved Mya back into the classroom at the start of this school year. Even though the year started virtually, Ladowitz worked in the classroom and often held Mya up to the camera during lessons.

Tara Rahm, a fourth grade science teacher at Hannah Ashton Middle School in Reynoldsburg, doesn’t consider herself an animal person, but she decided to get a class pet when she started teaching life science 10 years ago.

Instead of buying a turtle or a lizard, she decided on Madagascar hissing cockroaches.

Her husband, however, isn’t a fan. He doesn’t allow them in the house, so when schools closed last spring, she had to go into the classroom occasionally to feed them.

When she realized the school year would finish virtually, she took the cockroaches to the home of her twin sister, who is also a teacher and also has cockroaches as class pets.

“When the babies were born, it was such a happy thing,” she said.

Rahm kept the male cockroaches, and her students named them Comet, Gravity, North, South, Speed and Velocity, after several lessons they learned in their first quarter. She also has Eli, an 8-year-old cockroach, she named after her son.

Kyle Campbell, a zoology teacher at Westerville North High School, has 23 tanks in his classroom full of different species, including an alligator, turtles, snakes, toads, a bearded dragon, crabs, geckos, catfish and a tarantula.

He couldn’t take all the animals home with him when schools closed last spring, so he went into the classroom every Monday, Wednesday and Friday throughout the spring and summer to take care of the animals. He did, however, end up taking home three snakes.

Students usually pick an animal in his zoology course to learn about and take care of, he said, but that all fell through because of the pandemic. Fortunately, Campbell said he lives near the high school.

“I was lucky,” he said. “The principal gave me access to the building.”

It took him a little over three hours to feed all the animals the first time, but he eventually was able to shave an hour off the process. He also had to clean the tanks and check all the water levels.

“Overall, the pandemic wasn’t good for anybody, but it was hard on the animals, too,” he said.