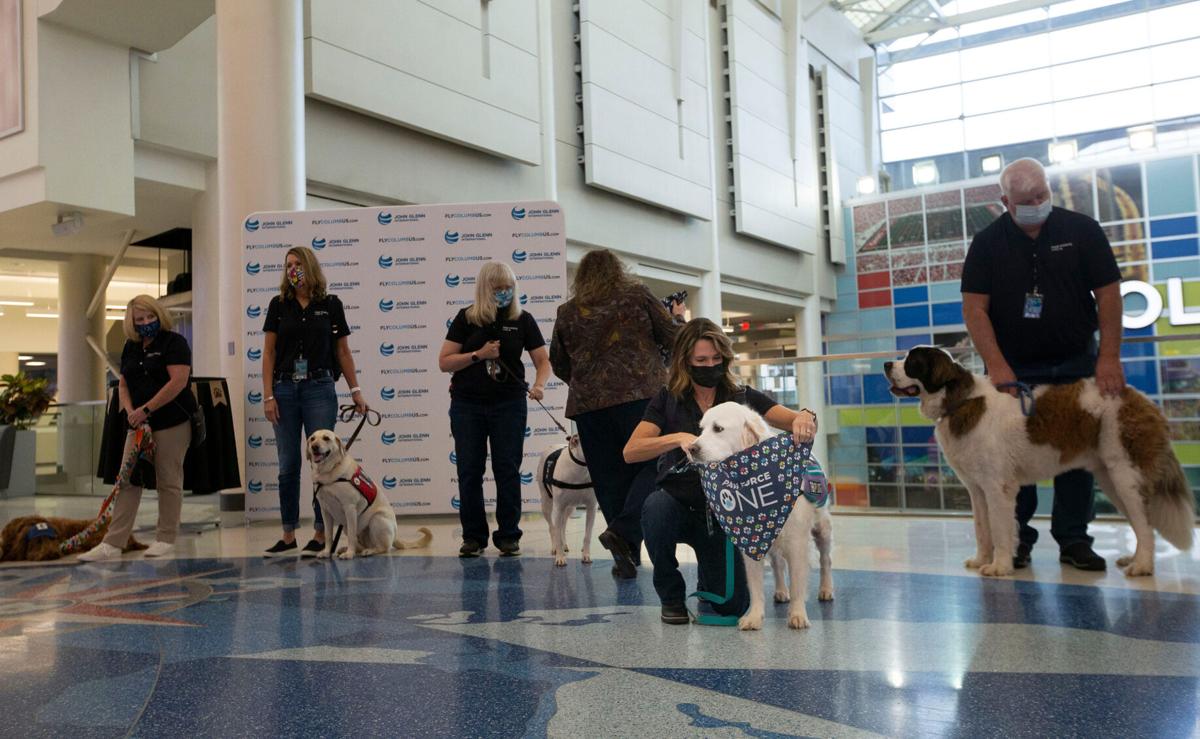 Tracy Hood puts a Paw Force One bandanna on Cleo during the inauguration of this year’s Paw Force One in John Glenn Columbus International Airport in Columbus, Ohio. 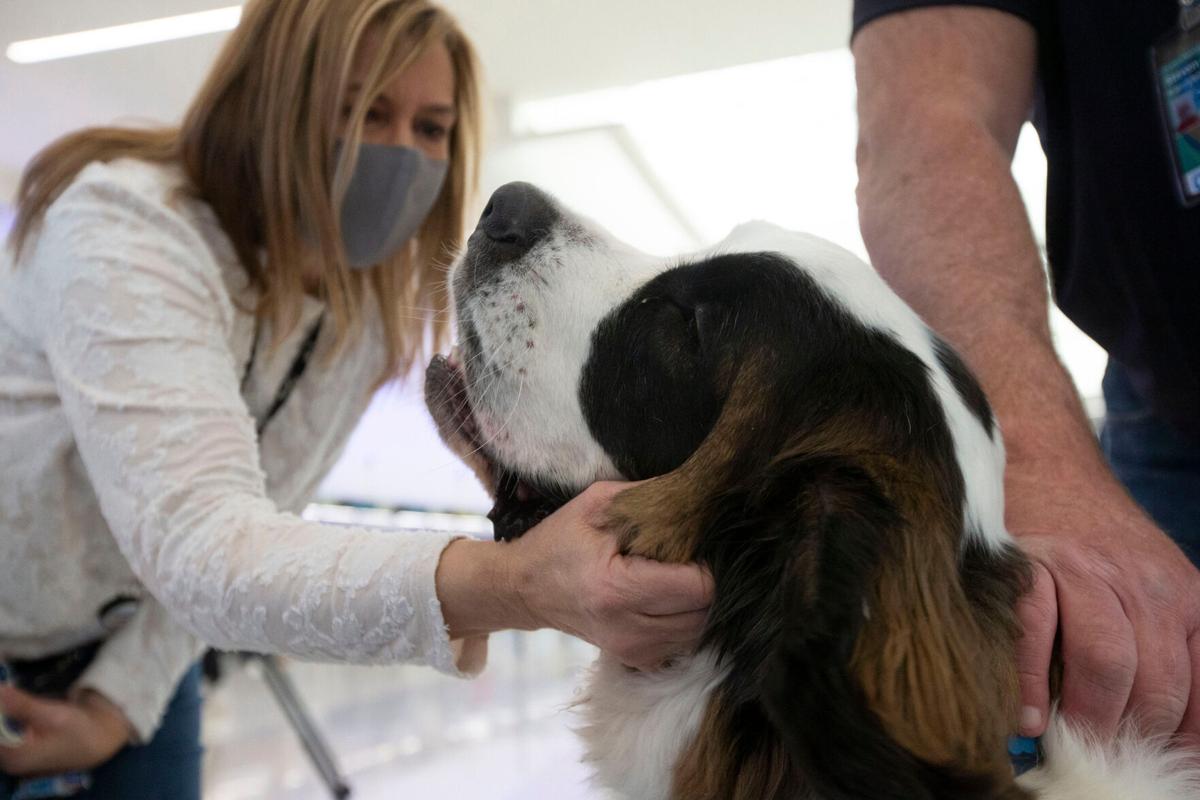 Thor, a nationally registered dog with the Alliance of Therapy Dogs, is petted by an airport employee after joining Paw Force One.

Tracy Hood puts a Paw Force One bandanna on Cleo during the inauguration of this year’s Paw Force One in John Glenn Columbus International Airport in Columbus, Ohio.

Thor, a nationally registered dog with the Alliance of Therapy Dogs, is petted by an airport employee after joining Paw Force One.

“Actually, I hate it,” the 48-year-old computer analyst said on a recent morning, shortly before boarding a flight for Houston to visit his niece.

He had a heart transplant five years ago and isn’t allowed to own pets. But he loves dogs and knows their therapeutic benefits, recalling stress-relieving canine visits while he was hospitalized.

So he was quick to meet Gatsby, an American Staffordshire terrier, newly “sworn in” during a tail-wagging ceremony inside John Glenn Columbus International Airport.

Gatsby is one of 10 trained dogs, certified by the Alliance of Therapy Dogs, who, along with their owners, will be volunteering inside the security checkpoints of the airport.

Called Paw Force One, the new program allows the dogs to roam the airport terminal, interact with passengers and lessen the stress of air travel.

Gatsby’s owner, Tammy Stemen, said her pooch doesn’t have to do much to please others.

“People see him and they just smile because he’s such a happy dog.”

Airports have tried to ease the stress of air travel with massage tables, lounges and calming stations. Columbus has an interfaith meditation room in the baggage claim area.

Local airport officials had heard of several dozen other North American airports with therapy dogs and saw the program as a natural fit.

“In addition to their training, these dogs bring something that can’t be taught — they love being around people,” said Angie Tabor, senior manager of customer experience for the Columbus Regional Airport Authority.

Each dog was given a paw-print neck scarf after being introduced. That scarf and a colorful vest now make up their uniform, identifying them as approachable while working. Hours are variable based on volunteers’ availability.

“I think it’s a great thing,” Fant said after greeting Gatsby and others. “It seemed like he wanted to be petted. Dogs don’t feel the stress.”

“I feel like she absorbs all the emotions that are brought to her. She senses what a person needs at the right time, whether it’s stress or they’re sad,” she said. “I feel like her purpose in life is to make people happy.”

Jeff and Edie Parker, waiting for a delayed flight to Orlando, Florida, for a short vacation, were curious about the lineup of dogs at the ceremony. They have two Labs of their own and miss them already, Jeff Parker said.

“We like dogs better than most people,” he said. “It’s very comforting to get to pet a dog.”

Thor, a Saint Bernard — a breed known for helping others — was the largest of the seven dogs to be sworn in. While he did bark repeatedly at one man who approached — his owner, Steve Kandybowicz, explained that those wearing both hats and masks can sometimes rattle Thor — a woman who stopped to pet Thor remarked: “He’s better than a bloody Mary.”

Flight crews were on board with the concept, too. Stephan Cleveland, captain of a United Express flight that had just landed in Columbus from Newark, New Jersey, said he hasn’t seen such a program in other airports.

“It sounds like it could distract the kids especially and keep them de-tensioned,” he said. “I think putting smiles on people’s faces before they get on board will drive down the overstimulation, even on the flight deck.”

Fant envisions a day when dogs could be on board, like air marshals, to maintain order and de-stress passengers.

“They could come up and down the aisles and you could pet them,” he said.