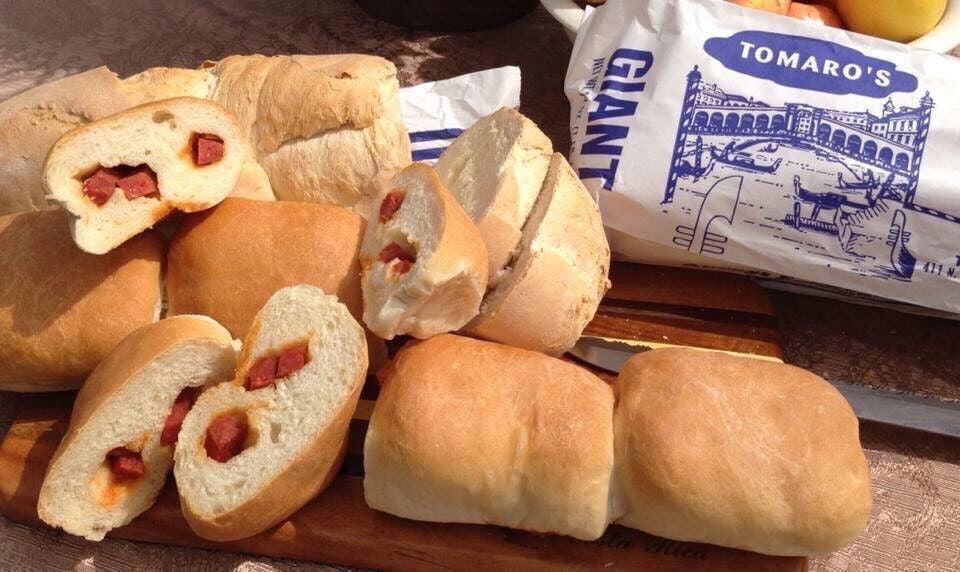 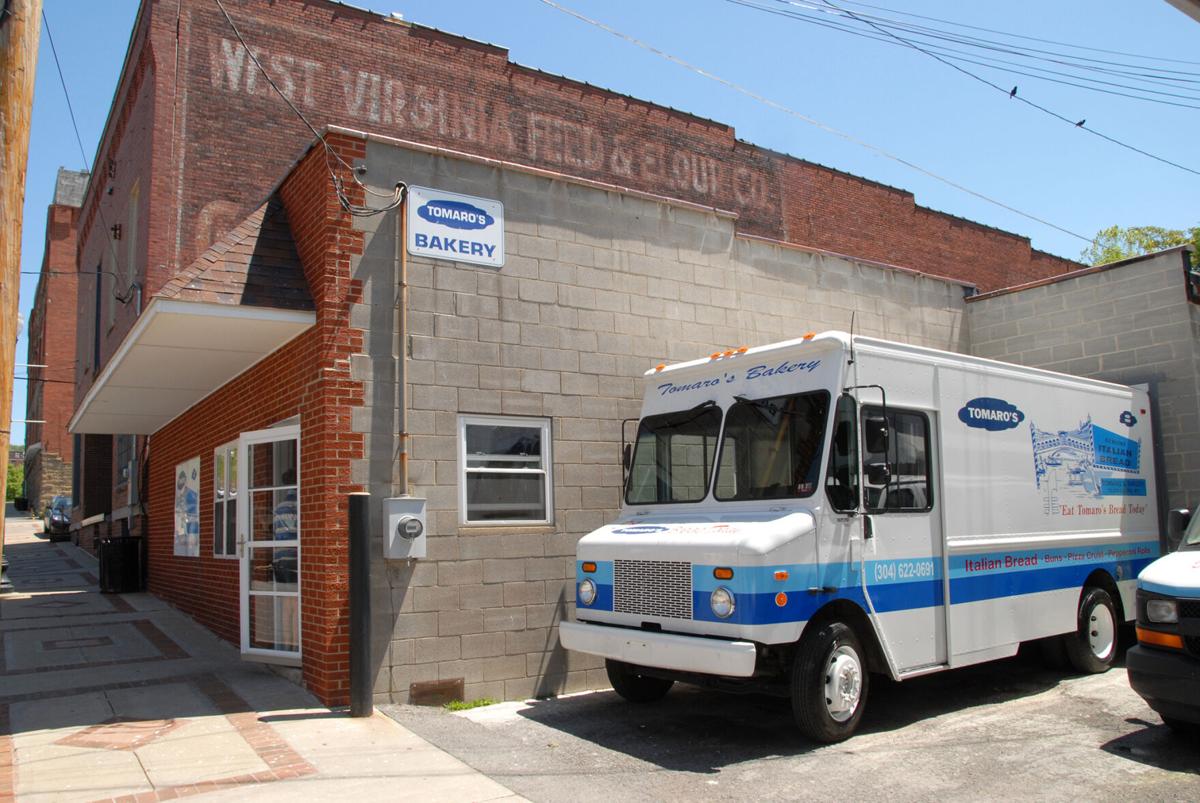 Tomaro’s has been in the same location in Clarksburg, West Virginia, since 1914.

Tomaro’s has been in the same location in Clarksburg, West Virginia, since 1914.

On the outside, they look like a plain hunk of bread. Or maybe a small, uncut hoagie bun. Or an elongated dinner roll. The exterior provides no clue, no tipoff, that meat awaits inside. Cut or bite into a West Virginia pepperoni roll, though, and the smell and flavor of an Italian kitchen come forth. Broken bread reveals sausage.

It’s that mystery of unseen meat baked inside bread that got the attention of the United States Department of Agriculture in the 1980s and almost killed the pepperoni roll. But more on that story in a bit.

The pepperoni roll has never traveled too far beyond its place of creation, the northern part of West Virginia. Its area of dominant influence centers around Buckhannon, Morgantown, Bridgeport, Clarksburg and Fairmont, where just about every convenience store stocks them. West Virginia bakers deliver regularly to Walmart and Sam’s Club stores as far away as Youngstown, Ohio, and Pittsburgh.

People in these parts of the Mountain State are indeed pepperoni roll passionate.

Some have laid claim to the title of creator of the pepperoni roll, but most of the bakers I talked to think that’s an impossible fact to pin down.

“There’s no real proof as to who was the originator,” says John Brunett, fourth generation co-owner of Tomaro’s Bakery in Clarksburg. Tomaro’s opened its doors in 1914 in the Glen Elk section of Clarksburg and has never moved.

Although pinpointing the exact person who thought of encasing pepperoni in bread may well be impossible, Italian bakers agree that the pepperoni roll was conceived as lunch for coal miners. They needed a type of meat that would not spoil. They needed a food that was portable, that could be eaten with one hand and didn’t require a plate or a fork. And they needed something that was filling. At the same time, the pepperoni roll represented a link back to their Italian homeland.

One of the Brunett family’s most cherished photographs depicts Italian immigrant Anthony “Tony” Tomaro, John’s great-grandfather, who started the bakery. His is the classic story of the penniless immigrant who, through ingenuity and hard work, makes a new and better life in America.

But Tony’s dream almost died. And it wasn’t because of economic downturns, world wars or rising flour prices. The biggest threat to the pepperoni roll came from the United States Department of Agriculture.

Even though the pepperoni used in rolls is already federally inspected, in the 1980s the USDA got nervous. It attempted to reclassify the bakeries as meat packers. Had that come to pass, the bakeries would have been required to install expensive concrete floors and draining systems, “potentially delivering a devastating blow not only to the future existence of the West Virginia pepperoni roll, but more importantly, to the family-owned businesses that produce them,” wrote West Virginia U.S. Sen. Jay Rockefeller, in a Sept. 12, 2002, letter to Bob Heffner, who maintains a website that celebrates the pepperoni roll. “Because of the proposed classification, the pepperoni roll may have ceased to exist,” Rockefeller continued.

Competitors in the pepperoni roll business cast one-upmanship aside and joined forces to protect their products from governmental meddling.

“Congressman Alan Mollohan (from West Virginia’s First District) wanted all the bakeries to provide him with information and proof that the pepperoni roll was safe,” recalls John Brunett. “And he came to our defense so that they could continue to be made to this day.”

In 1987, Rockefeller contacted then Secretary of Agriculture Richard Lyng, who, according to the senator’s 2002 letter, decided the USDA “would hold bakeries that produce pepperoni rolls accountable only to existing inspection standards.”

The pepperoni roll panic passed. And it remains an edible way to understand the Italian-American traditions of this part of West Virginia. At one time, the population of Clarksburg was about 40% Italian.

It’s shortly after noon on a Sunday. Mass has just ended at Immaculate Conception Catholic Church in Clarksburg. Sunday-morning quiet an hour earlier, Fourth Street suddenly comes alive when church lets out. The parking lot at Tomaro’s is full. On-street parking is non-existent. People are lined up for 60 feet down the sidewalk, awaiting pepperoni rolls.

“Being a strong Catholic- and Italian-oriented area, you still have your family meals on Sunday,” adds John. “My wife and her mother and sister all take turns rotating who has the Sunday pasta. People come and get their hot bread, their pepperoni rolls to snack on while they’re waiting on their spaghetti and meatballs to be ready.”

There may be disagreement over who made the first pepperoni roll in West Virginia, but the Brunetts are sure about who formed the first mini pepperoni roll: Janice Brunett. She’d noticed a two-year-old nephew having trouble holding a normal-sized roll.

“It was always funny to watch this 12-pound boy trying to hold a pepperoni roll,” John remembers. “Mother started making the smaller ones for him when she had leftover dough. When people saw them, they asked us to start selling them in the bakery, and now we do, by the dozen.”

Customers say the meat-to-bread ratio is higher in the mini rolls, and they’re often served at wedding receptions around Clarksburg.

As the coronavirus pandemic was worsening this past April, John told me that demand for comforting breads from Tomaro’s was overwhelming. The bakery continues to supply grocery stores and restaurants with fresh products. Customers continue to buy directly from the bakery, but now from the safety of a pickup window. As immigrant families have always done, the Brunetts have adapted.

Says John, “We are now 107 years old and in our fourth generation of family operation. Our family’s business has survived world wars, the Great Depression, and other difficult times. We hope to continue providing the area with our products for many more years to come.”

Fred Sauceman’s latest book is “The Proffitts of Ridgewood: An Appalachian Family’s Life in Barbecue.”