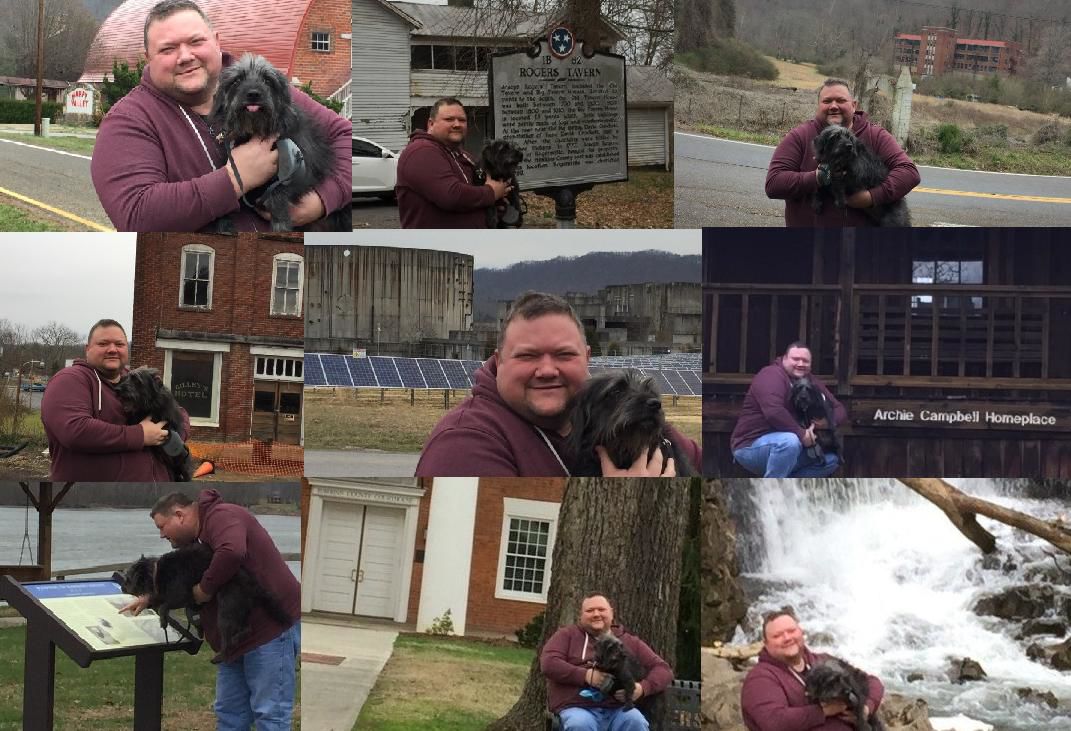 Maggie Mae joined the author on a whirlwind tour of Hawkins County's most interesting locations recently a la John Steinbeck's "Travels With Charlie: In Search of America." All photos by Lynn Brooks. 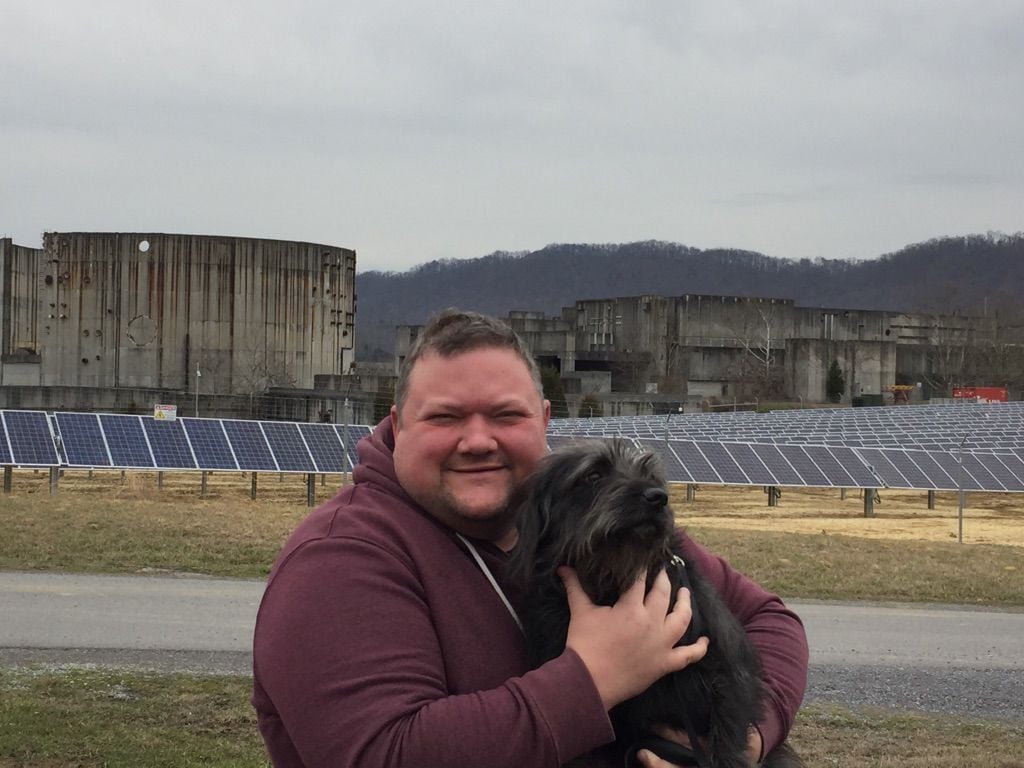 The author and is travel companion Maggie Mae pose in front of the TVA nuclear reactor ruins at Phipps Bend near Surgoinsville during a recent "Travels With Maggie: In Search of Hawkins County" adventure. 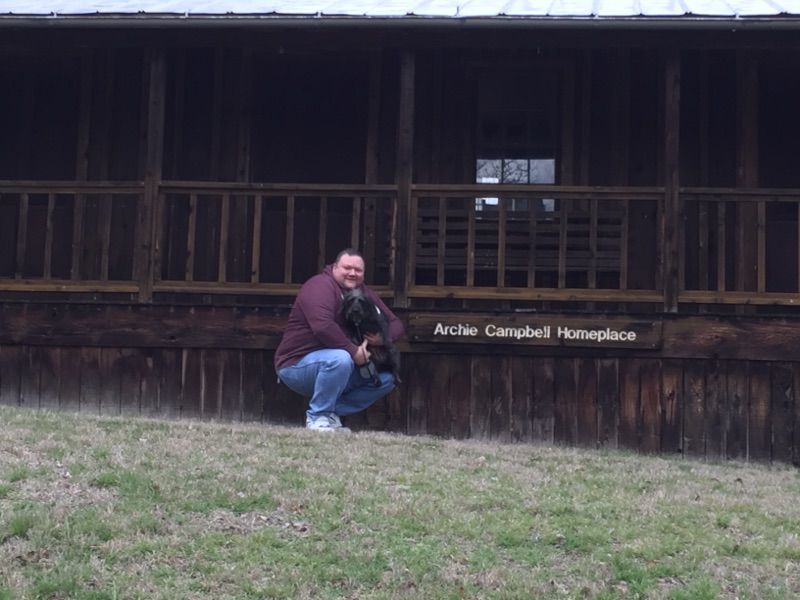 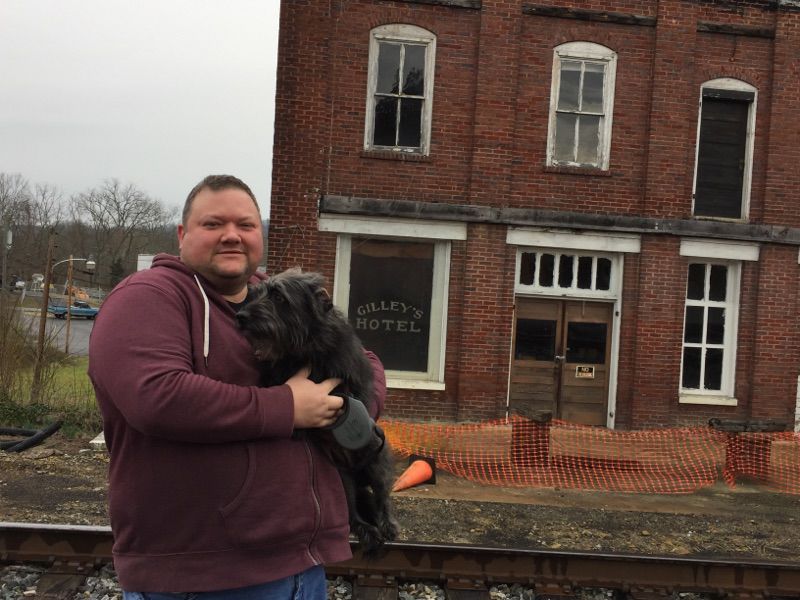 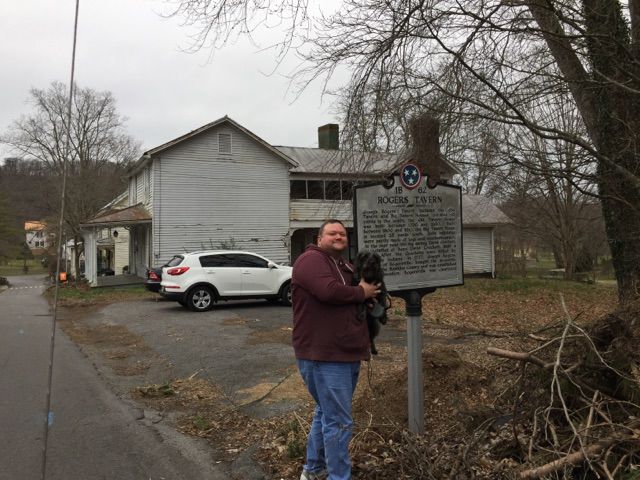 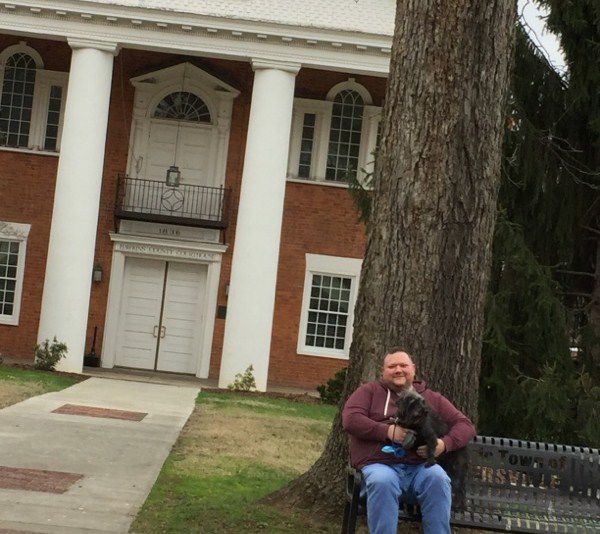 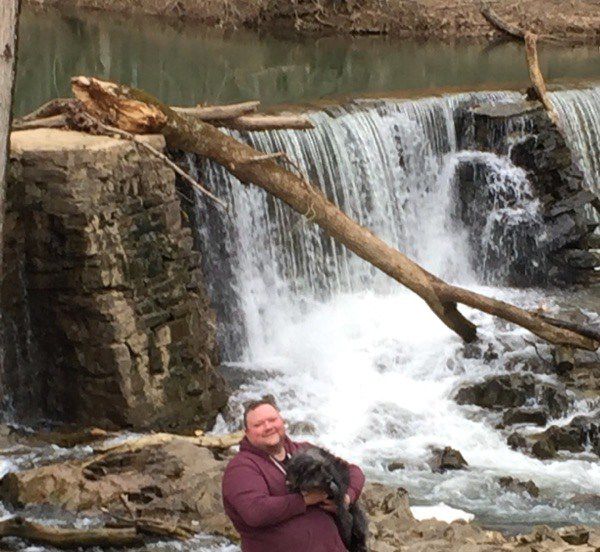 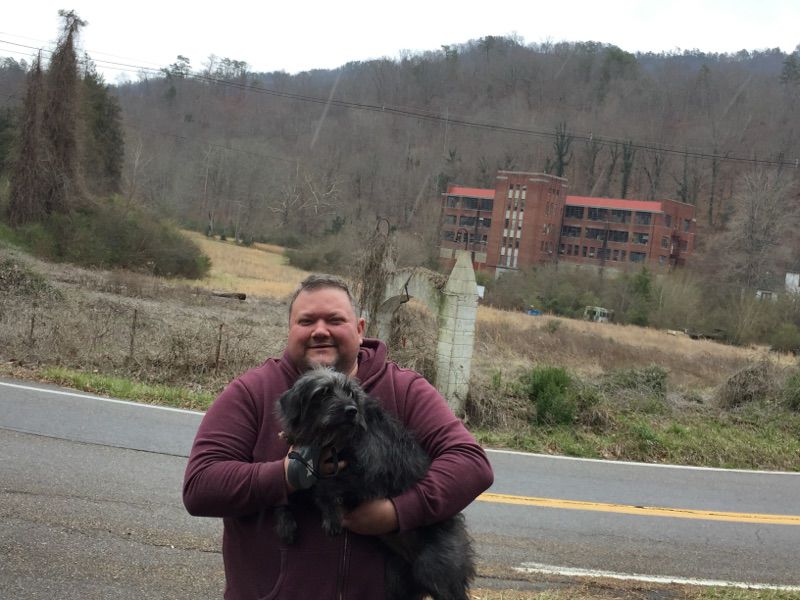 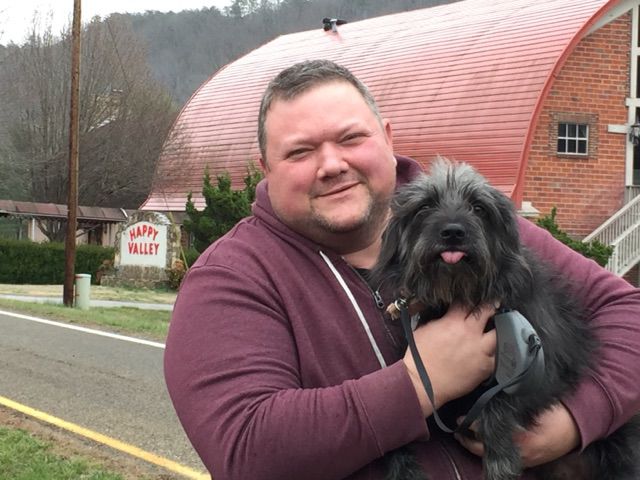 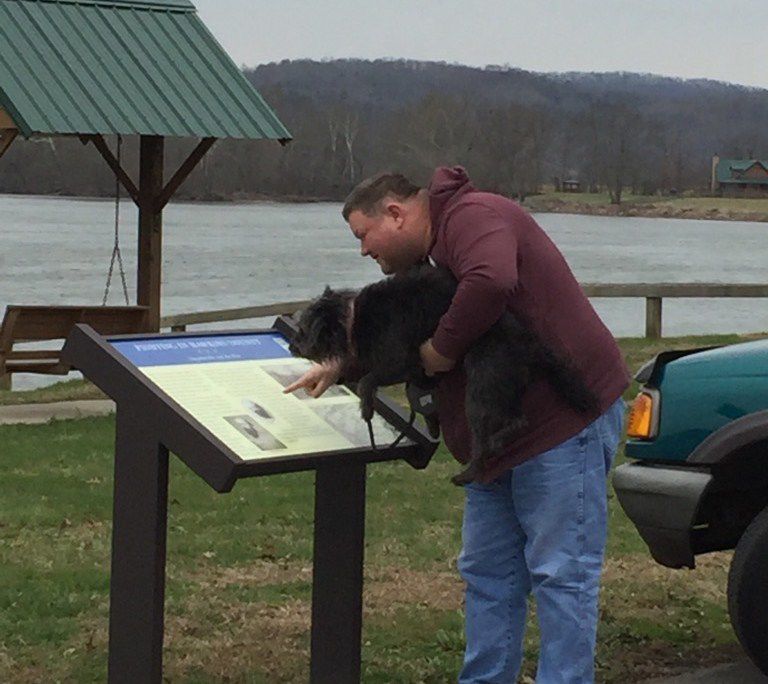 Maggie Mae joined the author on a whirlwind tour of Hawkins County's most interesting locations recently a la John Steinbeck's "Travels With Charlie: In Search of America." All photos by Lynn Brooks.

The author and is travel companion Maggie Mae pose in front of the TVA nuclear reactor ruins at Phipps Bend near Surgoinsville during a recent "Travels With Maggie: In Search of Hawkins County" adventure.

When the daily grind of life as a small town newspaper reporter starts to get me down, one of my favorite distractions is a recurring daydream about launching my own version of John Steinbeck's "Travels With Charley: In Search of America."

In 1960, Steinbeck took off on a 10,000 mile tour of the U.S. with his poodle Charley and a camper he named "Rocinante" after Don Quixote's horse.

Ever have a day where you felt like taking off down the highway with no plan, no reservations, no schedule and no specific return date? I have days like that on a pretty regular basis.

That's why I had this same escape fantasy for about 30 years, since I had my own "Charlie" — a golden retriever that was the most intelligent and beloved pet of my lifetime.

I've had some great dogs, but our Charlie (1987-02) was one in a billion — more intelligent, interesting and fun to hang out with than most humans.

She's smart, pretty, and an enthusiastic traveler. You can't even say the word "ride" in Maggie's presence without her going haywire and hopping around the living room in anticipation like a Mexican Jumping Bean.

But unless you're comfortably retired or independently wealthy, a year-long 10,000 mile driving tour of the U.S. isn't a realistic possibility.

Undaunted by the harsh economic realities of my life, one Saturday a few weeks ago, Lynn and I launched our own spontaneous adventure tour out west. By out west I mean Hawkins County.

Actually, the excursion began as a field trip to Yoder's Amish Market in Bulls Gap to get a corn beef sandwich. If you've never been to Yoder's on 11-E just south of the Hawkins/Greene county line, I highly recommend it.

Aside from having a wide variety of unusual groceries and snacks in stock, they also make the best deli sandwich I've had outside the Jewish delis near where I grew up in Chicago's northern suburbs.

We weren't in any hurry that day, and as Lynn, Maggie and I crossed the bridge over the Holston River into Hawkins County, I had an epiphany.

Why not have our own Travels with Charlie?

"Travels with Maggie: In Search of Hawkins County."

We decided to stop at every historical point of interest between Kingsport and Bulls Gap, and Maggie and I would pose for a photo.

If there's one lesson that can be taken away from this adventure, Hawkins County has a lot of interesting historical landmarks.

When I started cataloging in my mind potential stops, I actually came up with about twice as many locations as I was going to be able to visit and still arrive at Yoder's before it closed at 5 p.m.

Now that's a full day, and by the time it was over I have to admit Maggie was clearly bored with the whole idea. The fun of travel for her is stopping and sniffing things and then peeing on them. I’m pretty sure she’s oblivious to the historical significance of where she’s peeing..

After sniffing and peeing on many of Crockett Creek Park's wide variety of trees, however, Maggie was pretty much peed out and ready for a nap. I pried her out of the pickup against her better judgment to pose for the two Bulls Gap photo shoots.

Steinbeck ended his tour in Texas, of which he said, "People either passionately love or passionately hate Texas." Kind of sounds like Hawkins County to me.

Personally, I love Hawkins County, and if I had my druthers, Lynn and I would live in one of those old historic houses in downtown Rogersville.

Some have asked, “If you love Hawkins County, why do you write so much bad news about it?”

That's my job. I write the good news and the bad news. Good news is harder to find, but I put a lot of effort into seeking it out. Bad news, on the other hand, seeks me out. I’m a firm believer in facing problems head on. You're not doing yourself any favors by ignoring your problems and pretending like they don't exist.

One piece of good news is that Hawkins County is filled with good people and interesting places, as Maggie discovered one Saturday afternoon not too long ago.

If you're not familiar with the stops on our tour, here is a brief description of each location.

* In 1977, the TVA began construction of a nuclear power plant at Phipps Bend near Surgoinsville. At its peak, there were 3,000 people working on the construction project, but in August 1981, the TVA announced that the $2.95 billion plant had been canceled, leaving behind the ruins of the concrete reactor and steel skeleton of the cooling tower.

* The Surgoinsville Civil War monument is located at Riverfront Park. It mainly discusses the nearby Lyons Store and Post Office and the role that building played in the formation of Co. A of the 12th Tennessee Cavalry.

* Pressmen’s Home, located on Route 94 about 10 miles north of Rogersville, was headquarters of the International Printing Pressmen and Assistants Union of North America from 1911–1967. It was a massive, amazing campus featuring a trade school, a sanitarium, a retirement home, a hotel, a post office, a chapel, hydroelectric power plant, ball fields, golf course and much more. Surviving structures are in ruins and are on private property with stern warnings posted to stay out, but you can see them from the road, which is all you'd want to do anyway because they look dangerous.

* The Hawkins County Courthouse was built in 1836 and is the oldest courthouse in Tennessee still being used. A Civil War Trails monument located there discusses the county’s divided opinion on secession, the Union and Confederate occupations, and a local state delegate who surrendered to Union forces there and was imprisoned in Ohio.

* Rogersville's first white settlers were Davy Crockett's grandparents, who were killed by Native Americans there shortly after their arrival in 1775. Their property was then sold to Capt. Thomas Amis, who settled an area two miles away beside Big Creek around 1780 where he built the house, dam and mill that are still standing. Amis' son-in-law Joseph Rogers founded Rogersville, opened Rogers Tavern beside the park, and he and his wife are buried in the park beside Davy Crockett's grandparents.

* Gilley's Hotel was built beside the railroad tracks in 1920 with four stories, more than 70 rooms, and during its existence it housed a doctor's office, barber shop, movie theater and formal dining room. Currently, it is in need of renovation.

* Country singer Archie Campbell, who performed on the Grand Ole Opry and TV show "Hee Haw," was born in downtown Bulls Gap in 1914, and his home still stands next door to a museum in his honor.

Archie Campbell’s grandson Chase Campbell wasn’t around when Archie was in his heyday, but he’s constantly getting to know his grandfather through the stories and the experiences of others.