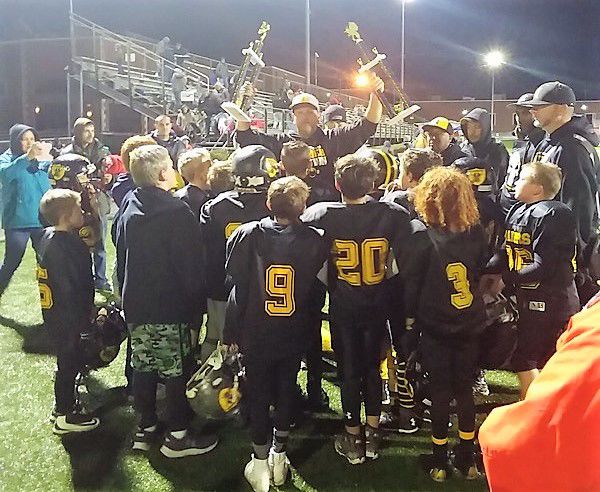 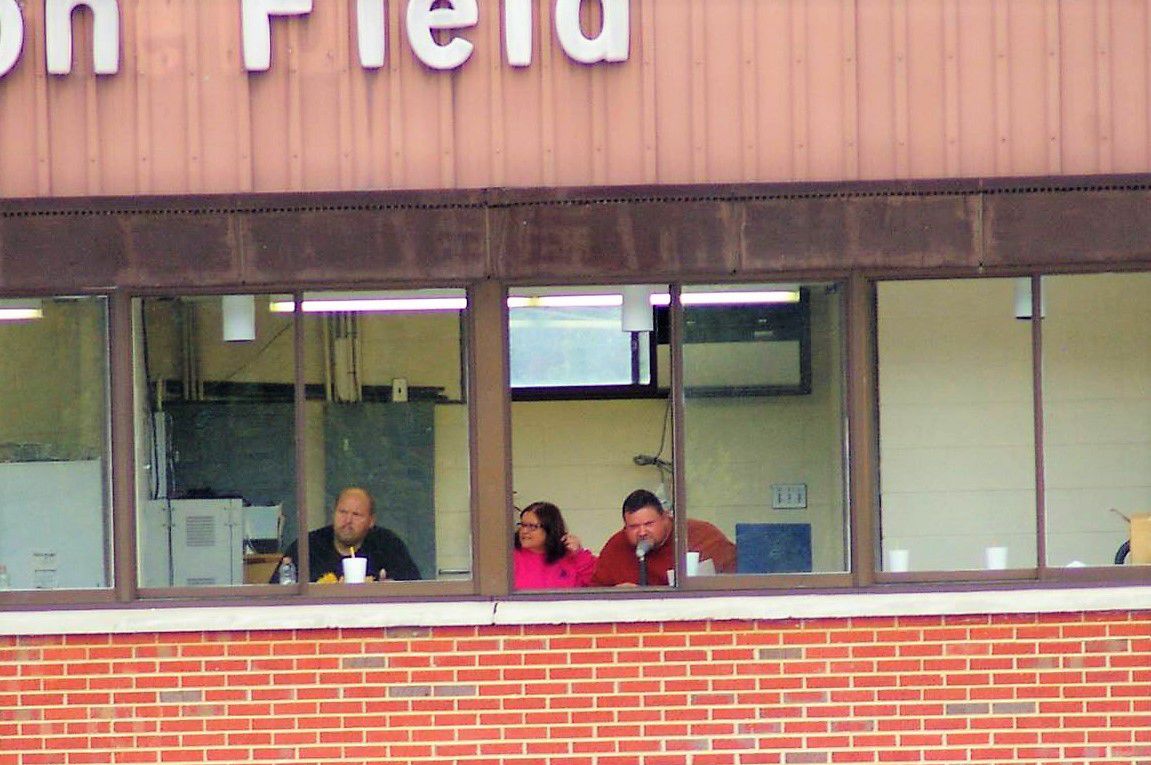 That's me on the right with the microphone in front of me. When I say Lynn is by my side, she is literally by my side, and usually with the binoculars up to her eyes. Sorry, I can't remember the name of the fellow to the left working the scoreboard. 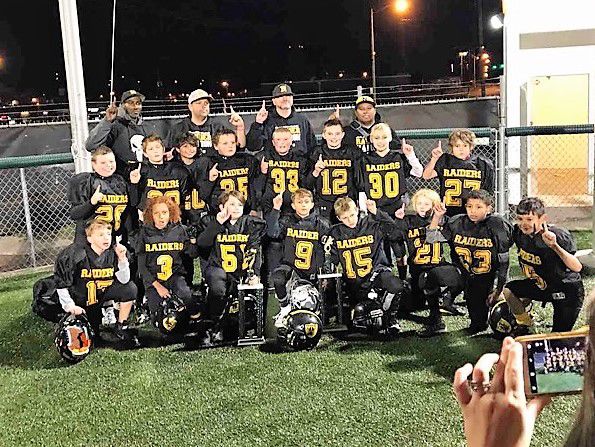 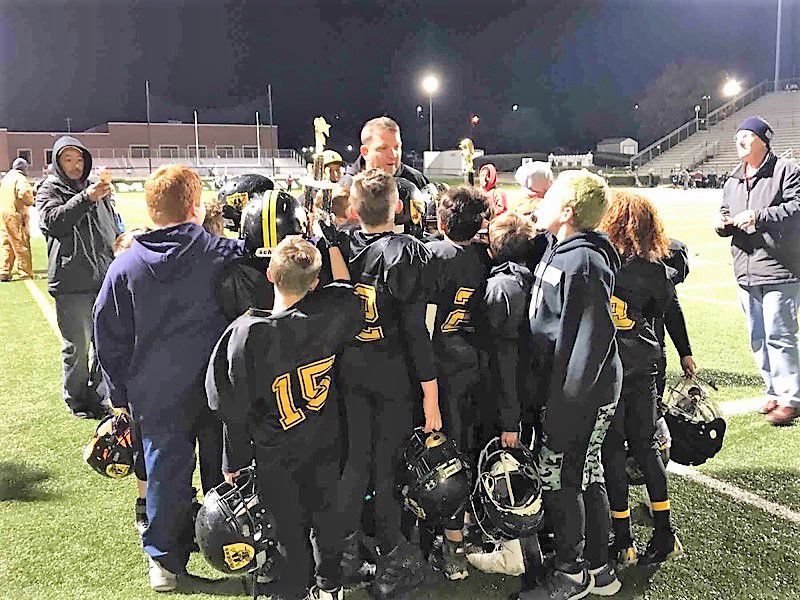 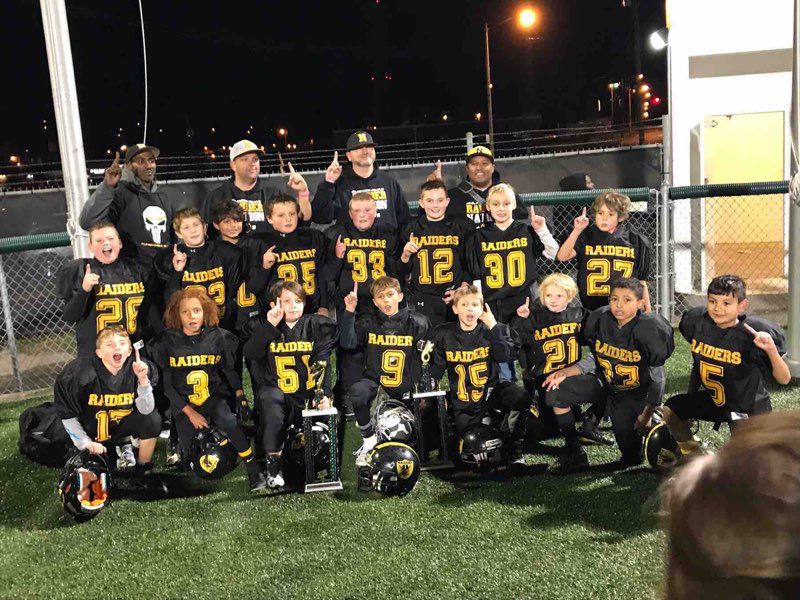 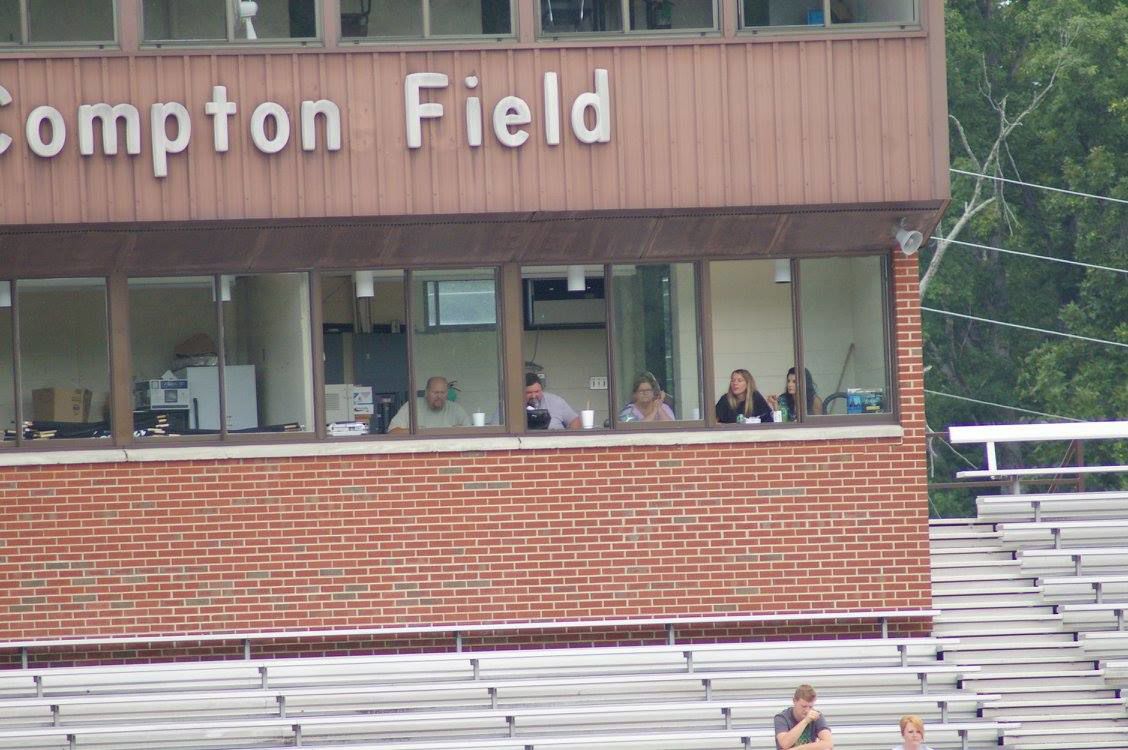 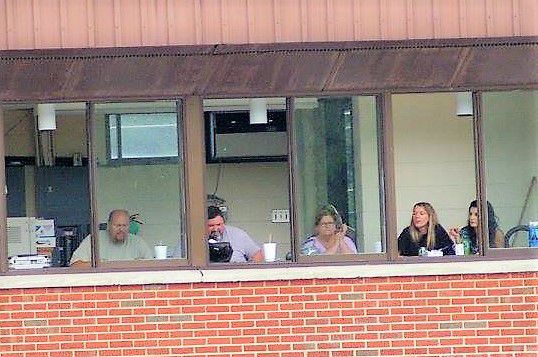 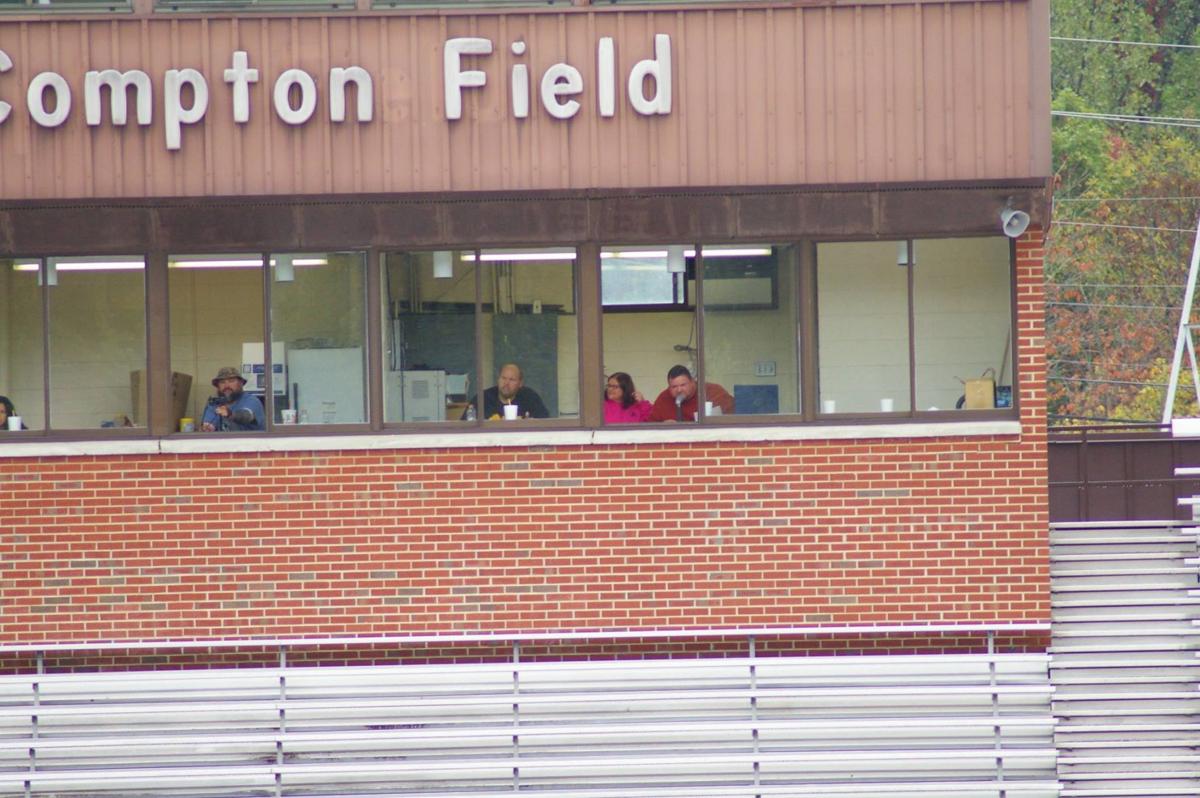 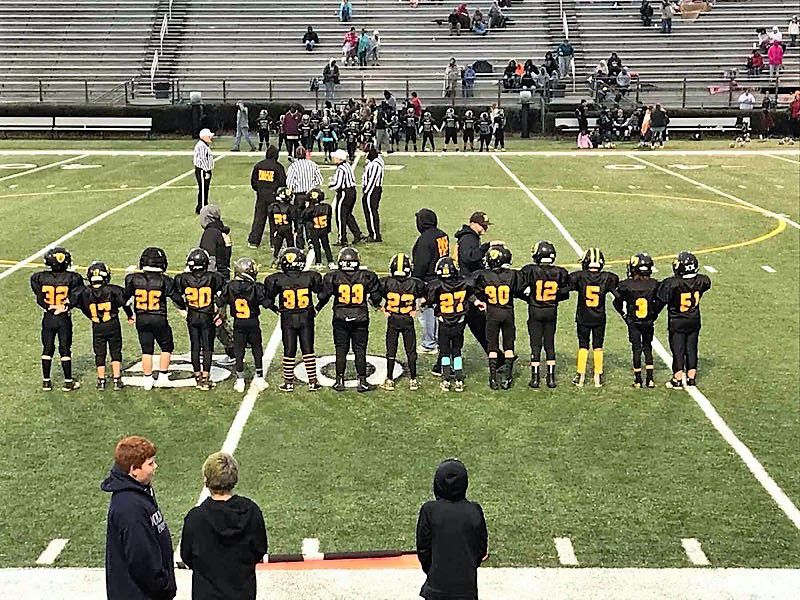 That's me on the right with the microphone in front of me. When I say Lynn is by my side, she is literally by my side, and usually with the binoculars up to her eyes. Sorry, I can't remember the name of the fellow to the left working the scoreboard.

As God as my witness, I swear the following testimony is the truth.

When the Eagles called a time out to freeze Cody "Doink" Parkey just as he was kicking it through the uprights, I told Lynn, "Now he’s going to hit the goal post again."

I thought by mentioning it I could jinx that from happening an unprecedented fifth time in one season, but I was wrong.

Doink let us down again.

But when I get too depressed about the Bears, I look back on the success of my multi-championship-winning Bloomingdale Raider Youth Football program.

This past fall I wrapped up my sixth season of serving as the Voice of the Bloomingdale Raiders, with Lynn by my side as spotter and occasional scoreboard operator.

It's a real shame that Sullivan North High School will be closing because based on the success of the Bloomingdale Raiders over the past few years, the Sullivan North Raiders were going to be inheriting some really good experienced football players in a few years.

Let’s give a tip of the hat to Freshmen head coach for the past two seasons Lee Carswell, previous Freshmen co-head coaches Austin Brooks and Steven Duty, and Varsity head coach Jeff Jones.

This is how multi-championship JV head coach (and my nephew) Tyler Brooks explains their success:

"Hard work and dedication from each and every player and coach. We strive to teach fundamentals and leadership. We love each and every one of our kids. We don’t just create a football team, we try to create a family. We teach the difference between winning and losing and most don’t teach that anymore. We teach kids about more than just football, we teach them respect, honor, loyalty, God, and most of all self pride."

Yes, I'm sure those are contributing factors.

But he's leaving out one key component to victory.

Aside from announcing the runners and the tacklers, and inspiring fans to visit the concession stand ("All proceeds benefit your Bloomingdale Raiders football program"), I also conduct an advanced music appreciation course from the press box.

Generally the Raiders host a triple header on a Saturday morning at the Sullivan North varsity football field.

I’ll play a variety of classic hits while the lads are warming up. But when a live version of "Rocky Top" performed by the Osborne Brothers hits the airwaves, everybody knows its almost time for the National Anthem.

Then it's all about setting the mood and psyching out your opponents.

The first step is the team intro music. The visitors are introduced with the ESPN Monday Night Football theme song. Respectful, yet bland.

Then the home team players are introduced with the exciting, powerful Chicago Bulls theme/intro song.

Each home team gets their own music for running out onto the field.

For the Freshman squad, its usually "Thunderstruck" by AC/DC.

For the JV team, which wears black jerseys, they always take the field to AC/DC's "Back in Black".

And the Varsity team always takes the field to "Welcome to the Jungle" by Guns N’ Roses.

The Freshmen teams don't kick off, but every time the JV or Varsity kick off, they're slapping their shin pads to the beat of Queen's "We Will Rock You".

I generally try to keep the energy up during downtime between touchdown and kickoff, turn over on downs, and time outs.

We need to fill about two minutes of dead space, which is why I pick an upbeat tune that gets right to the point.

Of course, "Celebration" by Kool and the Gang is a big favorite following a home touchdown.

After an away touchdown I've got a few favorites including "Baby Did a Bad Bad Thing" by Chris Isaac; "Hold on I'm Coming" by Sam and Dave; and "I'm a Believer" by the Monkees.

My catalog of other "downtime" music contains some of which is traditional stadium toe tappers like "Get Ready For This" by 2 Unlimited; "The Hey Song" by Gary Glitter; "Tequilla" by the Champs; "Can't Touch This" by MC Hammer; "Crazy Train" by Ozzy Osborne; and "Who Let the Dogs Out?" by Baha Men.

But I'm also liable to bust out with something obscure like the intro to "Why Does Love Have to be So Sad" by Derek and the Dominoes; "Hip Hug Her" or "Green Onions" by Booker T and MGs; "Paradise by the Dashboard Light" by Meatloaf; "Hot Rod Lincoln" by Commander Cody; "Peace Frog" by the Doors; and "Thank God I'm a Country Boy" by John Denver.

Cheerleaders generally put on a show at halftime, but when they're through, I keep them on the field with the "Cha Cha Slide" by D.J. Capser and the "Chicken Dance Song" by Werner Thomas.

A good way to come back from halftime is with the first 1:45 of "Also Sprach Zarathustra" by Richard Strauss, also known as the intro to “2001: A Space Odyssey.”

Either that or “Gonna Fly Now” by Bill Conti (AKA the theme From “Rocky”).

Sometimes when a game ends in our favor I'm tempted to play "Another One Bites the Dust" by Queen, but Lynn won't let me.

Instead I generally close out each triple header with "The Final Countdown" by Europe. AKA “The Final Psych Out.”

I could go on and on with my playlist. “YMCA,” “Kung Fu Fighting,” “Ice Ice Baby,” “Werewolves of London,” and “All Star” by Smash Mouth, to name a few.

For people my age, these songs are part of our DNA. But most little squirts who have only been on this planet for 6-12 years are hearing these for the first time.

Nothing cracks up me and Lynn more than to be sitting in the press box playing an oldie, and watching kids on the field dancing their little hearts out.

Lest I allow myself to get a big head, Coach Tyler points out, "Honestly I don’t pay attention to the music."

He recovers by adding, "The announcer is a vital part of our organization and helps fuel our kids with the music you play and keeps the fans entertained."

It keeps the announcer entertained as well.

'They'll remember this the rest of their lives': Youth football league defies pandemic

I was so proud that some of our youth football coaches defied the pandemic and organized a safe, albeit piecemeal league of teams spread over three counties.