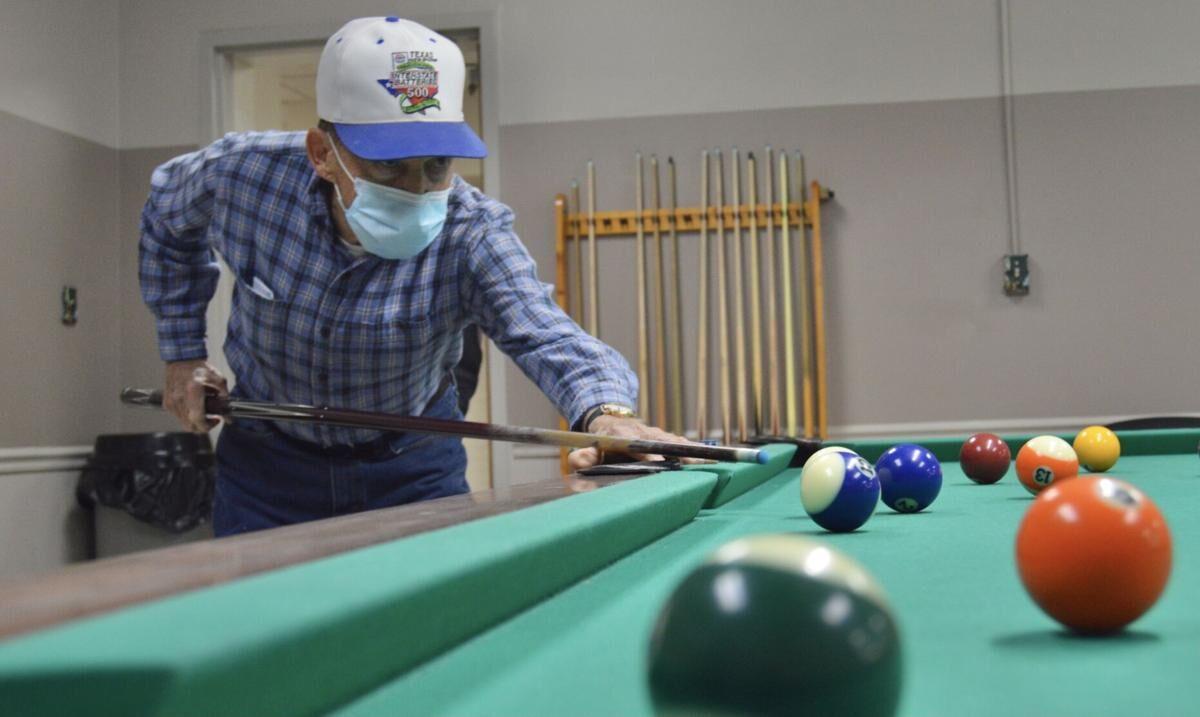 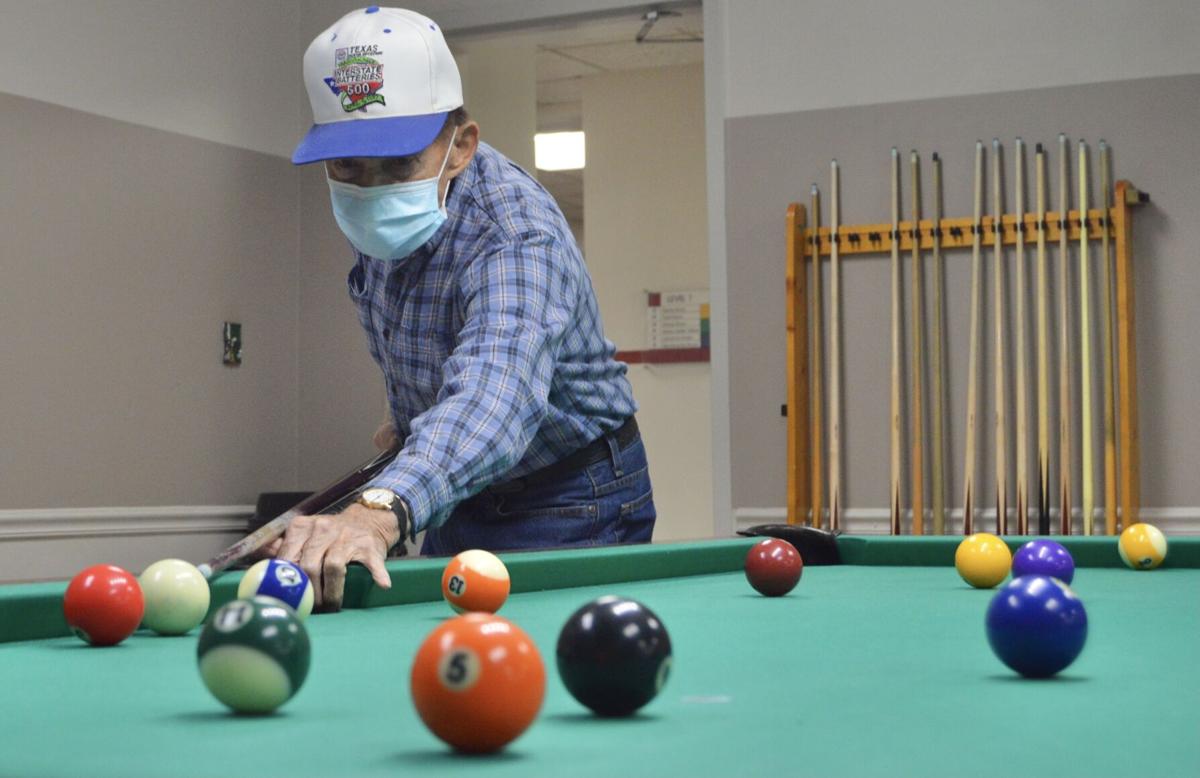 J.D. Gass prepares to take a shot during a round of 8-ball at the Kingsport Senior Center last week. 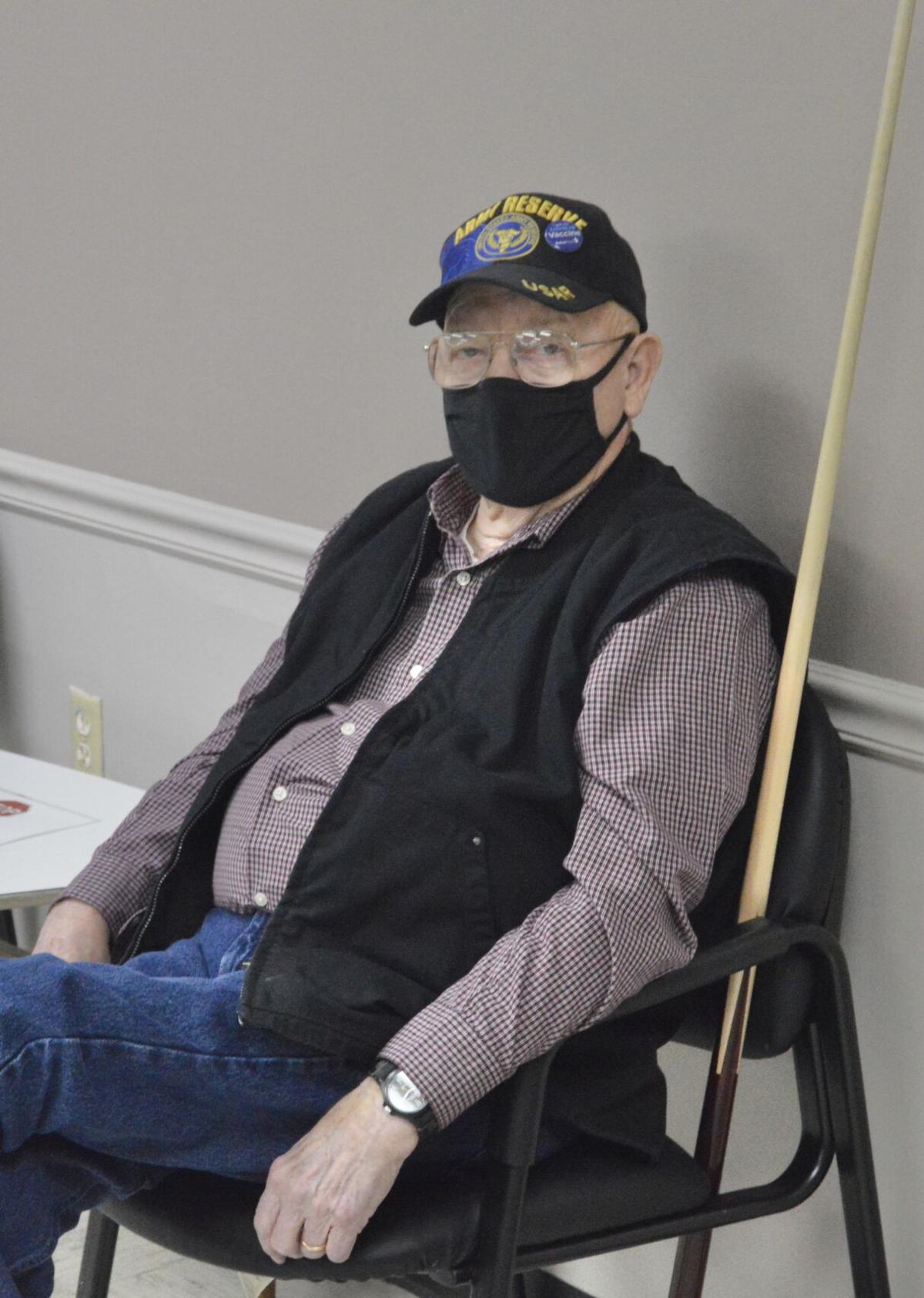 David Reed scans the table recently at the Kingsport Senior Center in the Renaissance Center downtown. 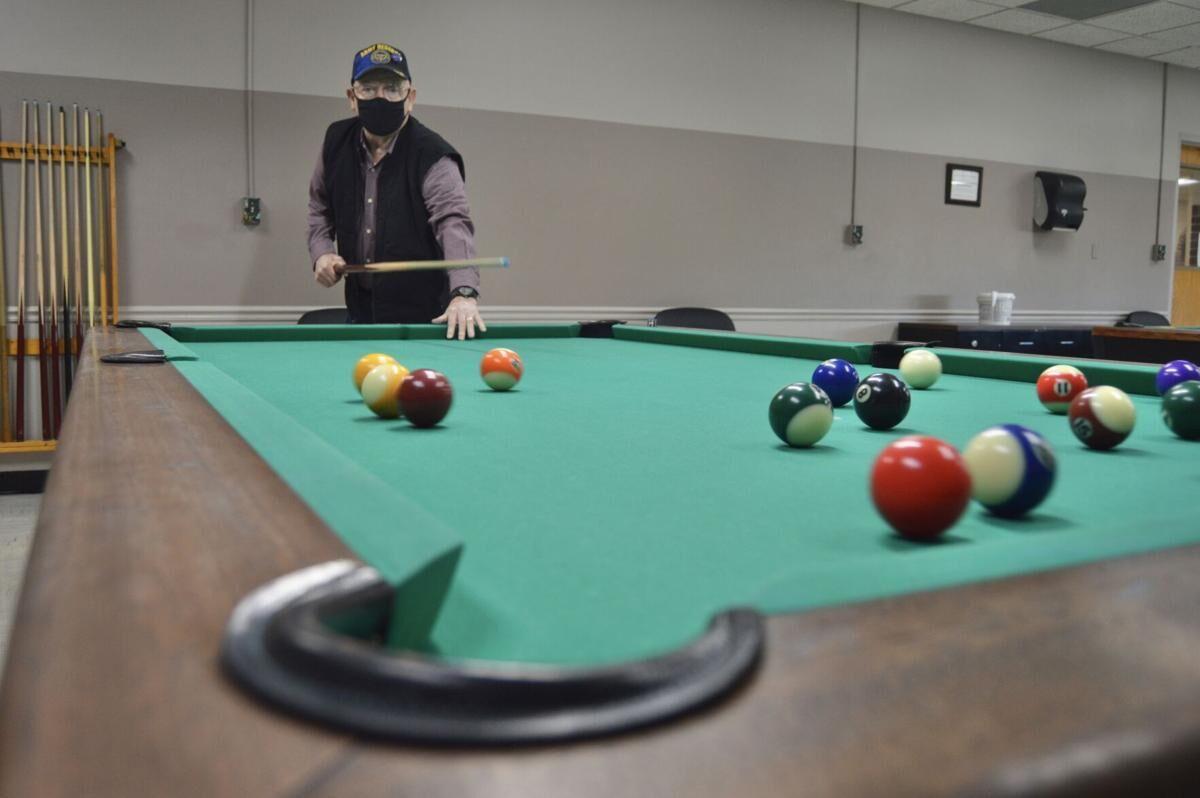 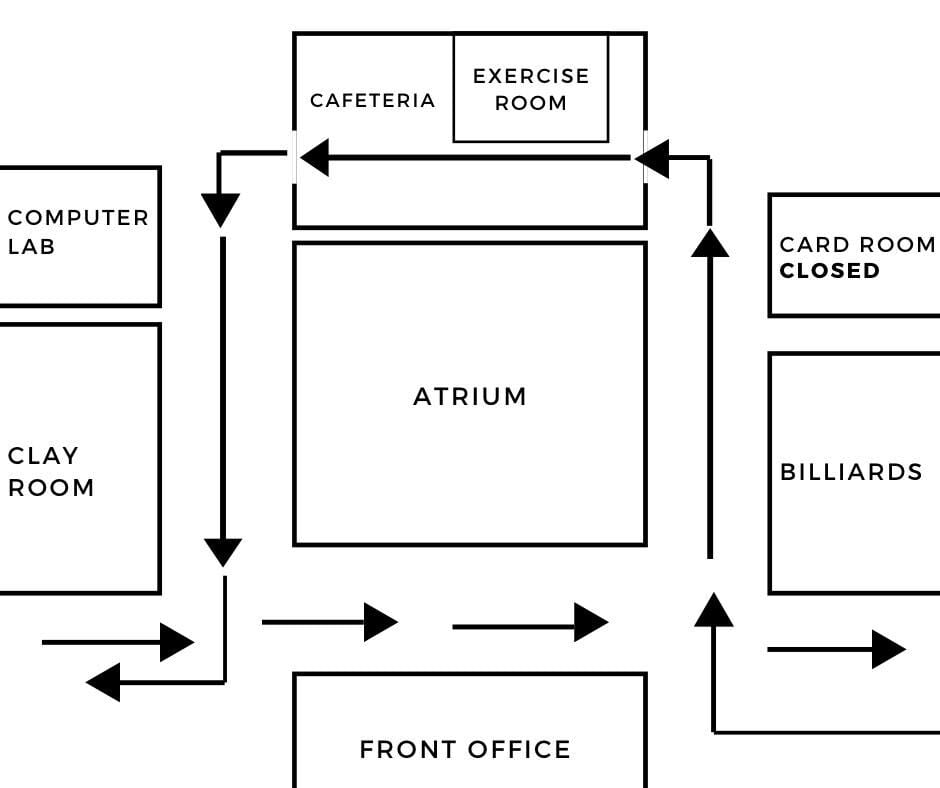 A floor map of how folks should move around the Kingsport Senior Center when the facility reopens on Monday. 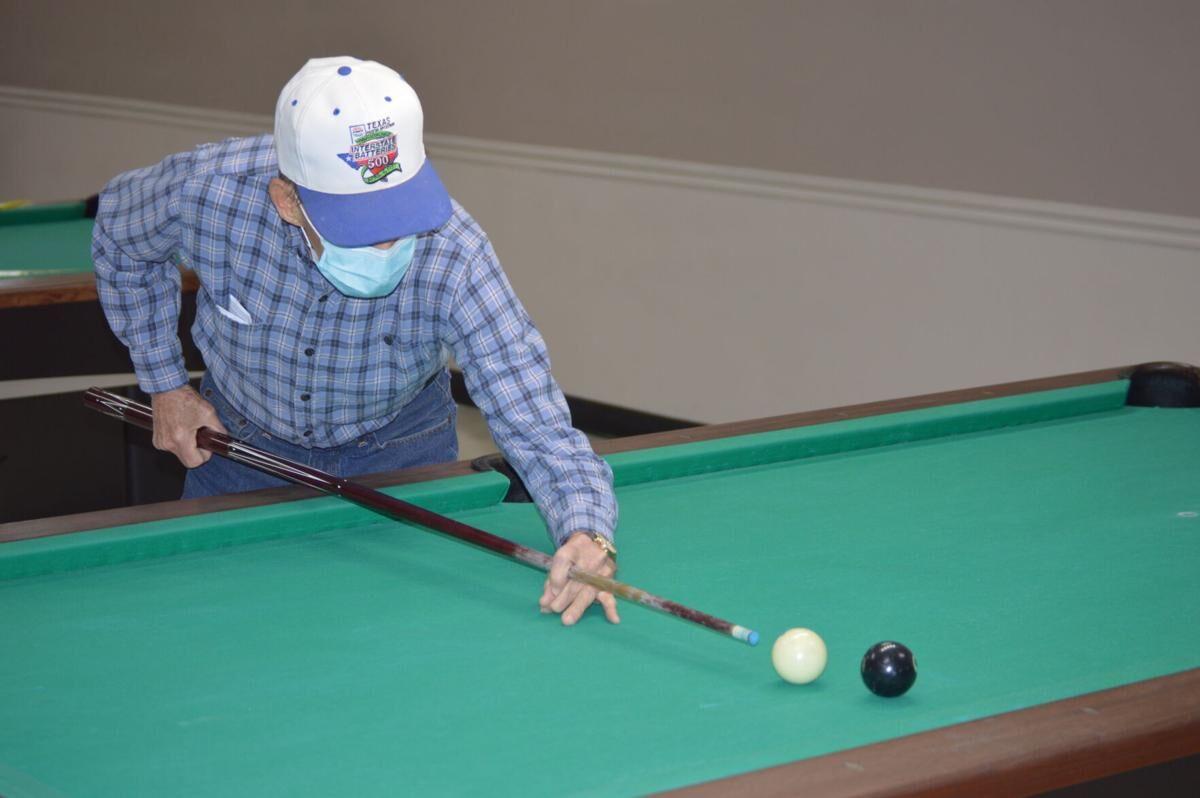 J.D. Gass prepares to take a shot during a round of 8-ball at the Kingsport Senior Center last week.

David Reed scans the table recently at the Kingsport Senior Center in the Renaissance Center downtown.

A floor map of how folks should move around the Kingsport Senior Center when the facility reopens on Monday.

By MATTHEW LANE and RICK WAGNER

KINGSPORT — The pool games are back, as is woodworking.

The Kingsport Senior Center has returned to in-person activities, albeit with some limitations. It has reopened at its main location, downtown in the Renaissance Center, and its Lynn Garden branch in the Lynn View Community Center.

After being shut down for most of last year, the center with membership open to those 50 and older has reopened to seniors eager to play some pool, work out in the gym and, maybe most important, to socialize with their friends.

The COVID-19 pandemic brought many changes to the city of Kingsport and its operations. Some facilities remained open under special conditions, some offered virtual or curbside services and others were outright closed.

One of the more impacted facilities was the senior center. It shut down on March 18 and remained closed until Oct. 1. Then, because of an increased number of COVID cases in Sullivan County, the facility shut down again after Thanksgiving.

“We opened on Oct. 1 and did well. We didn’t have any outbreaks of COVID, but the numbers in the county were skyrocketing and the health department felt we needed to shut back down,” said Shirley Buchanan, executive director of the senior center. “We just wanted to be safe. That’s why we shut back down.”

Earlier this month, the city began a rolling reopening of its leisure service facilities, including Bays Mountain Park, the library, carousel, aquatic center and the senior center. The move comes as COVID-19 cases are on the wane and vaccinations continue to be administered.

The main branch is open from 8 a.m. to 3:30 p.m. The Lynn View branch reopened March 15 with hours running from 8:30 a.m. to 2 p.m. Social distancing guidelines are still in place, and everyone who comes in has to wear a mask per the ongoing Sullivan County mask mandate.

Buchanan said she’s been hearing from seniors saying many have been eager to get back into the building after being away for so long.

“They want us to open safely, but they’re also very isolated. Most of them have gotten their vaccines and are eager to get one if they haven’t,” Buchanan said. “As a group, they want the vaccines and be back into doing some things and be with their families.”

WHAT IS THE NEW NORMAL?

Even though the senior center was closed to members for the better part of a year, the facility and its staff conducted a large number of online programs and stayed engaged on social media with polls, jokes and livestreams of exercise classes.

It also reached out and checked in with the seniors of Kingsport.

The senior center typically offers a congregate meal during normal times, but during the pandemic that switched to a drive-through offering. The wood shop is now open Monday through Wednesday, an exercise class is being offered and the gym is open too, although with every other machine cordoned off to allow for social distancing.

Come April, Buchanan said, more and more classes will hopefully be added to the facility’s roster.

“We did plenty of online programs and we’re going to continue with our virtual arm. It’ll just be another branch of the senior center,” Buchanan said. “We’ve had such a good response with the online, we feel like we can’t pull it back ever. We’re just going to have a virtual presence from now on.”

WHAT DO TWO ACTIVE MEMBERS SAY?

“The only reason we come down there is for the pool, and we used to come down twice a day, five days a week,” Reed said. “While they were down, we had to go to Eastman and shoot.”

Reed will be 78 in May and is retired from Eastman. Gass, 85, is mostly retired, but still does carpentry work from time to time. Both men have received their COVID-19 vaccinations.

“I’ve been waiting a long time for (the reopening),” Gass said. “I just miss everybody.”