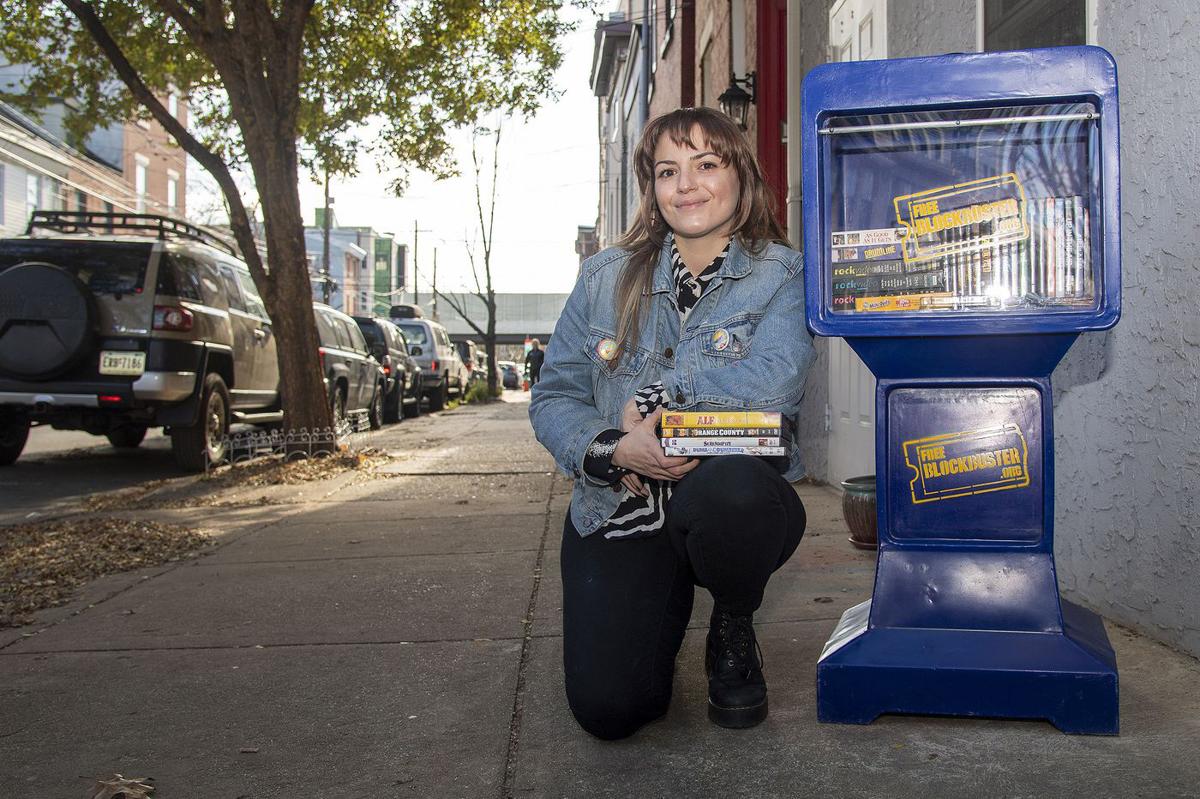 A nostalgic nod to the beloved video store chain, Free Blockbusters — like the Little Free Libraries that inspired them — are small public boxes where people can leave a DVD and/or take a DVD for free. 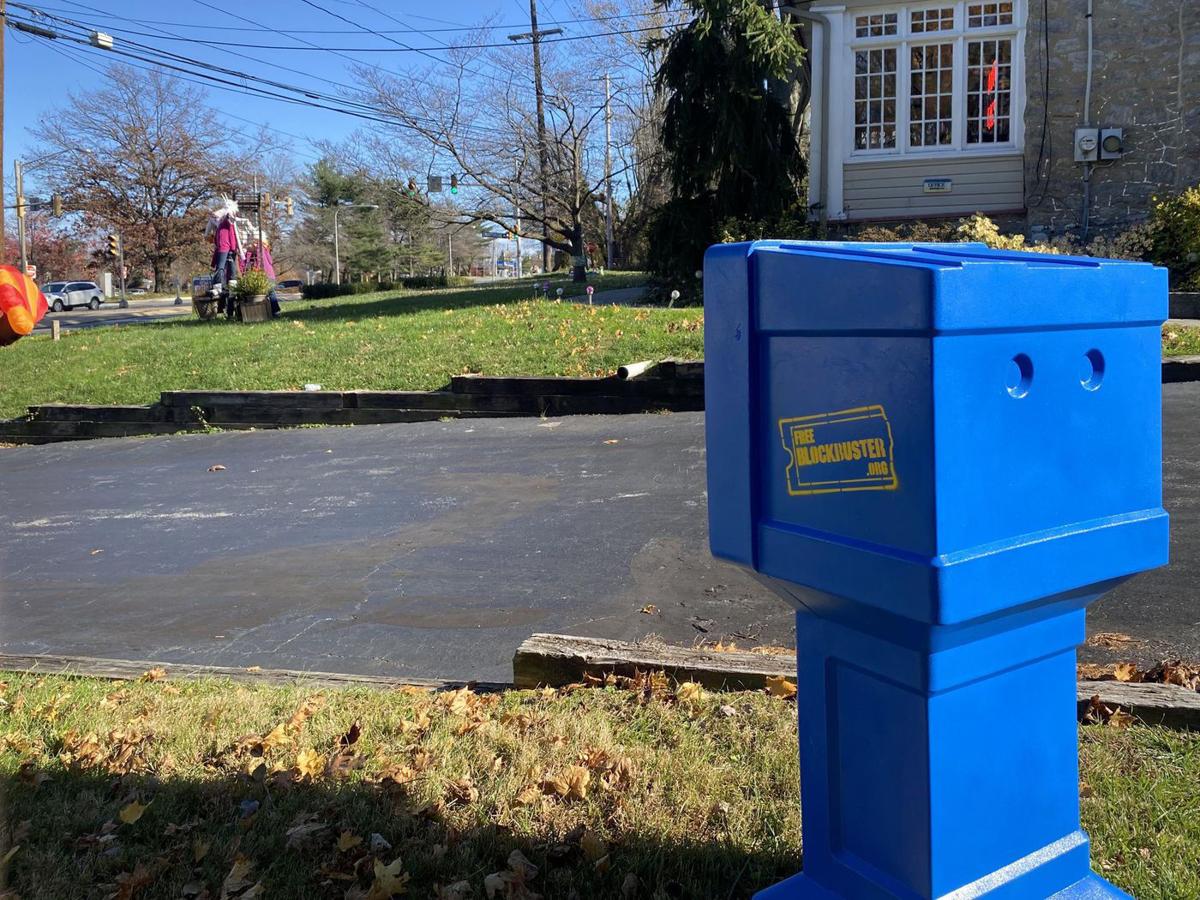 The Free Blockbuster at Agency by the Mall looks out over Baltimore Pike in Springfield, across from the Springfield Mall.

A nostalgic nod to the beloved video store chain, Free Blockbusters — like the Little Free Libraries that inspired them — are small public boxes where people can leave a DVD and/or take a DVD for free.

The Free Blockbuster at Agency by the Mall looks out over Baltimore Pike in Springfield, across from the Springfield Mall.

PHILADELPHIA — When Kim Lettiere filled the little Free Blockbuster she erected with her own DVDs, she was sure her copy of “Steel Magnolias” would remain untouched for a while.

The people of her neighborhood decided otherwise.

“I put in ‘Steel Magnolias’ thinking that it wouldn’t be a hit, but that was one of the first ones gone,” she said.

Turns out, Philadelphians need a good cry and a little Dolly Parton just as much as anybody.

A nostalgic nod to the beloved video store chain, Free Blockbusters — like the Little Free Libraries that that inspired them — are small public boxes (usually repurposed newspaper honor boxes painted blue with the yellow Blockbuster logo) where people can leave a DVD and/or take a DVD for free.

But it’s not just DVDs. Anything that you’d find at a real Blockbuster, from popcorn to video games, is up for grabs (or dropping off) too. And there’s no need to worry about laminated membership cards or late fees because there’s no expectation that the movies will be returned, only that people will replace them with other items from their own collection.

The concept was created last year by Brian Morrison, a Delaware County native living in Los Angeles, who calls himself the “Secretary of FreeBlockbuster.org, a nonprofit association.”

“There are a lot of abandoned newspaper boxes around L.A.,” said Morrison. “We’re a city that loves movies, and free movie boxes seemed like a great way to rehabilitate commercial blight.”

The first Free Blockbuster went up on Feb. 27, 2019, outside of a grocery story in Los Feliz, Los Angeles, and since then other people have run with this be-kind-and-help-your-neighbor-unwind concept, taking it nationwide, from Oklahoma to Virginia.

Lettiere’s Free Blockbuster, which went up on East Columbia Avenue near Girard Avenue, is the 18th in the country, but not the first in the Philly area. That distinction goes to Susan Triggiani, Morrison’s mother and the owner of Agency by the Mall, an insurance, tag and notary business across from the Springfield Mall in Delaware County.

Inspired by her son, Triggiani, whose epic year-round lawn displays at her business are the stuff of Delco legend, erected her Free Blockbuster next to the parking lot at her agency last month.

“This is Brian’s brainstorm, but I saw it and totally wanted to do it,” Triggiani said. “We’ve got some great stuff in there right now. We have ‘Gremlins,’ ‘Office Space,’ ‘Kill Bill’ and ‘A Knight’s Tale’ on DVD, and we have some Disney VHS tapes.”

Triggiani has also taken a bit of artistic license with her Free Blockbuster and put in some old film reels, a copy of “The Book of Mormon” (the actual book, not a film of the musical), a biography of Vanilla Ice, and the score for the musical adaptation of Kurt Vonnegut’s “God Bless You, Mr. Rosewater.”

Meanwhile, over at the Free Blockbuster in Fishtown, there were packs of microwave popcorn and boxes of candy (Junior Mints! Swedish Fish! Milk Duds!) along with DVDs like “Drumline,” “Tango & Cash” and one of Lettiere’s favorite movies, “Airplane!”

Lettiere, who works in the film industry and is friends with Morrison, said when she heard about his Free Blockbuster concept she wanted to bring it to Philly.

She found an abandoned honor box, painted it blue, and downloaded the logo from the FreeBlockbuster.org website.

As someone who grew up going to Blockbuster every Friday night with her brother to pick out a movie, popcorn and candy, Lettiere, 28, said her nostalgia for the company, which shuttered in 2010, is strong, and she’s finding that others feel the same way.

“People are really starting to embrace it and take advantage of it, which is what I love,” she said. “I heard one girl walk by today and say ‘Is this real?’”

Morrison said the most unusual location yet for a Free Blockbuster is inside the Flashback Retropub in Oklahoma City, and some of the more unusual items that have been left in Free Blockbusters across the country include DVD players, VCRs and a Sega Genesis game system.

“We love it when people drop off copies of movies they made themselves,” he said. “Of course, sometimes people put trash in them too. We don’t encourage that.”

Morrison said Free Blockbuster’s mission is to “combat the myth of scarcity by providing free entertainment to as many people as possible.”

In an age when many viewers can stream whatever movie they want (or scroll for hours trying to find one), Morrison believes there’s an important place for Free Blockbusters in the world.

“Choice paralysis is a real thing. Sometimes it’s nice to have a limited selection,” he said. “Some of our boxes have really weird and wonderful movies you won’t find on Netflix. Would you rather trust the algorithm or your neighbors?”