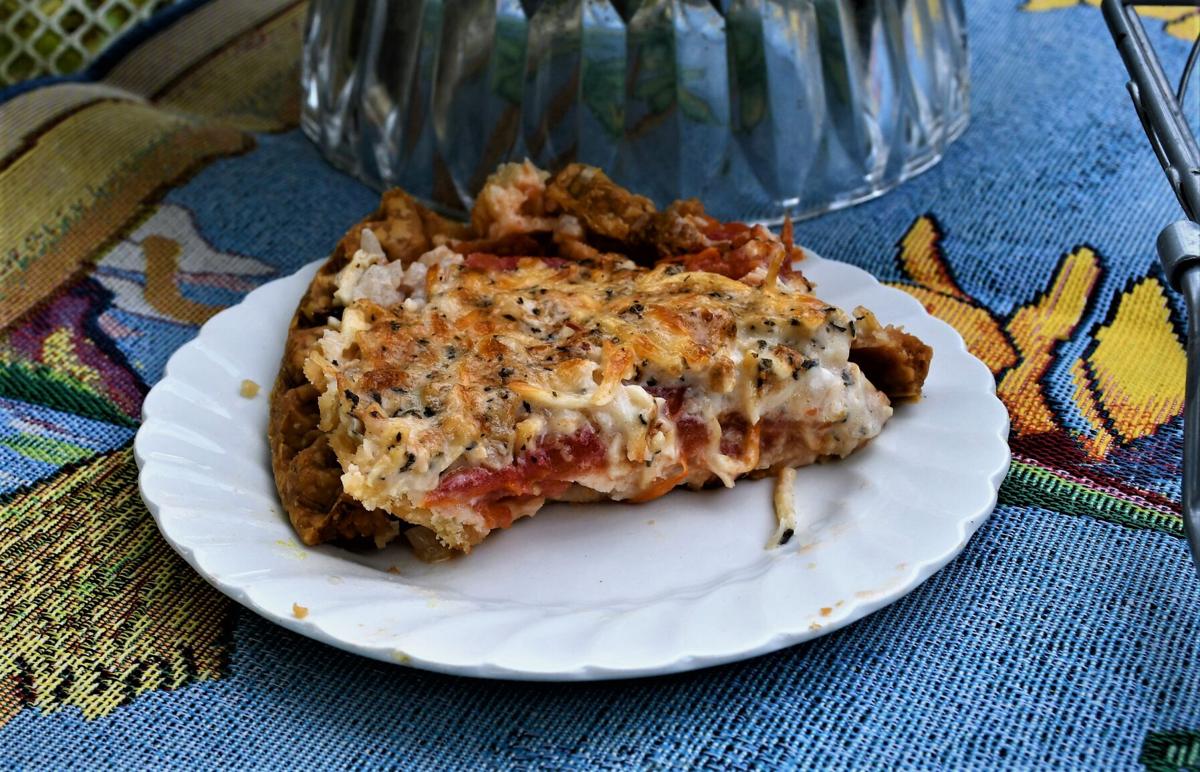 This is a slice of John’s attempt to make the Fresh Tomato Pie recipe his maternal cousins discovered in the August edition of Cooperative Living Magazine, familiar to current or former residents of Southwest Virginia who are customers of Powell Valley Electric Cooperative. 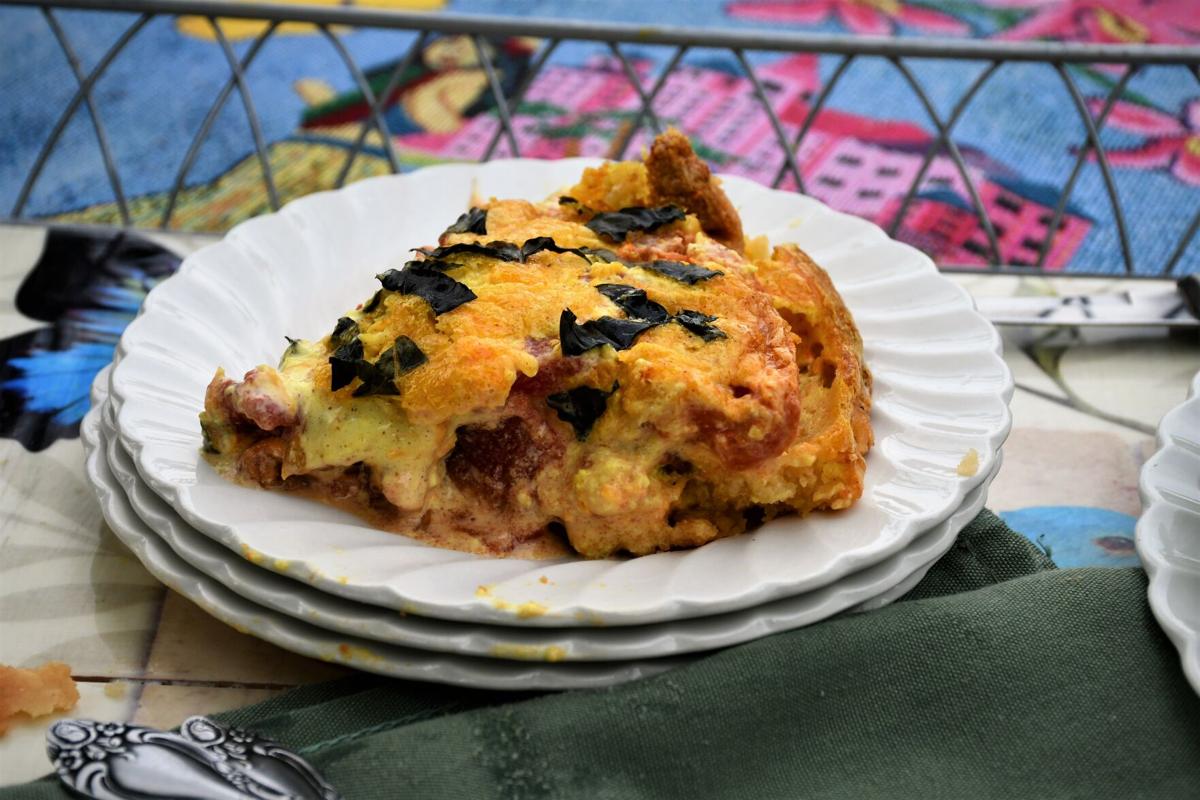 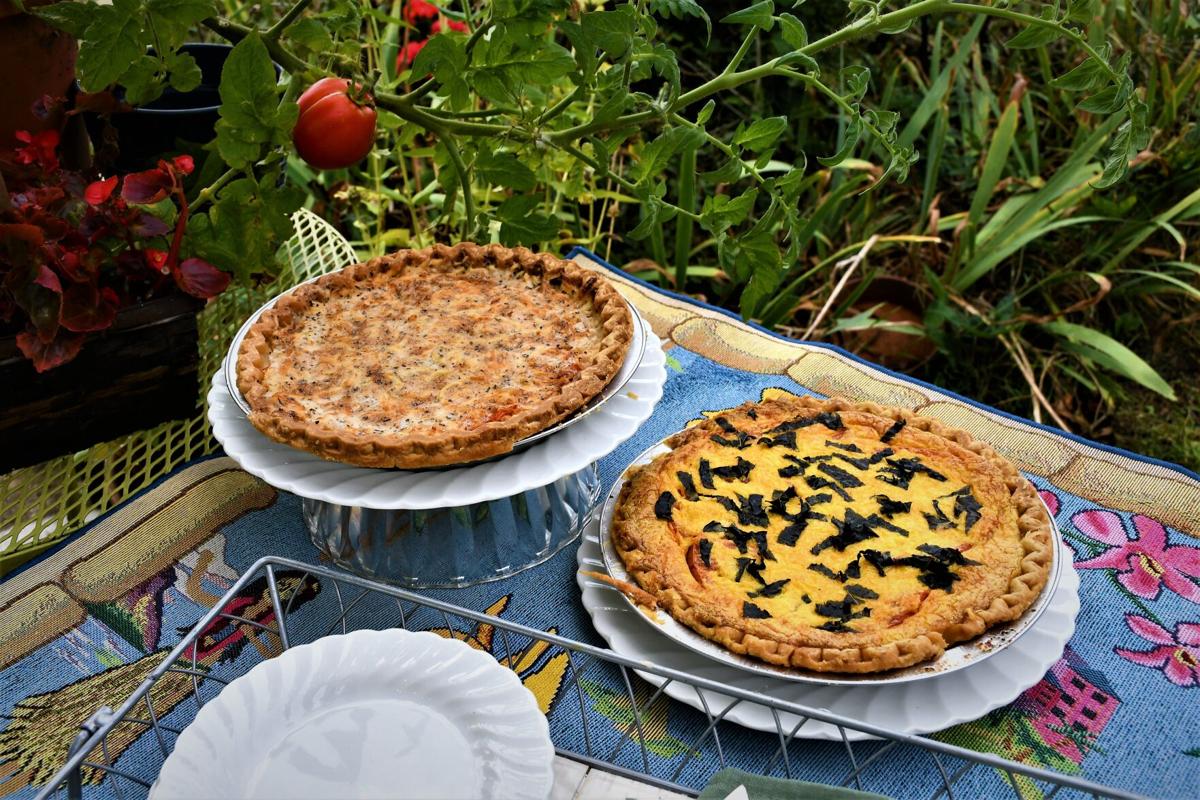 Left: a tomato pie made with Caesar salad dressing.

Right: a tomato pie made with mayonnaise. 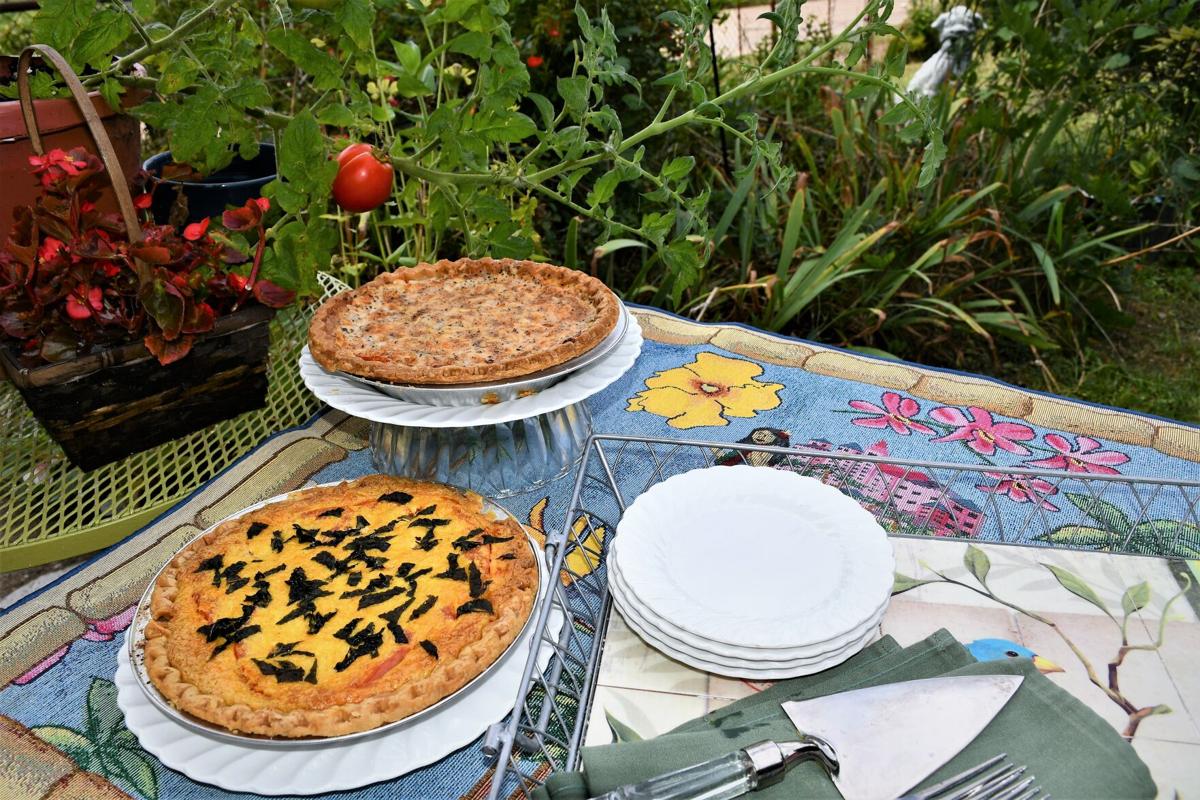 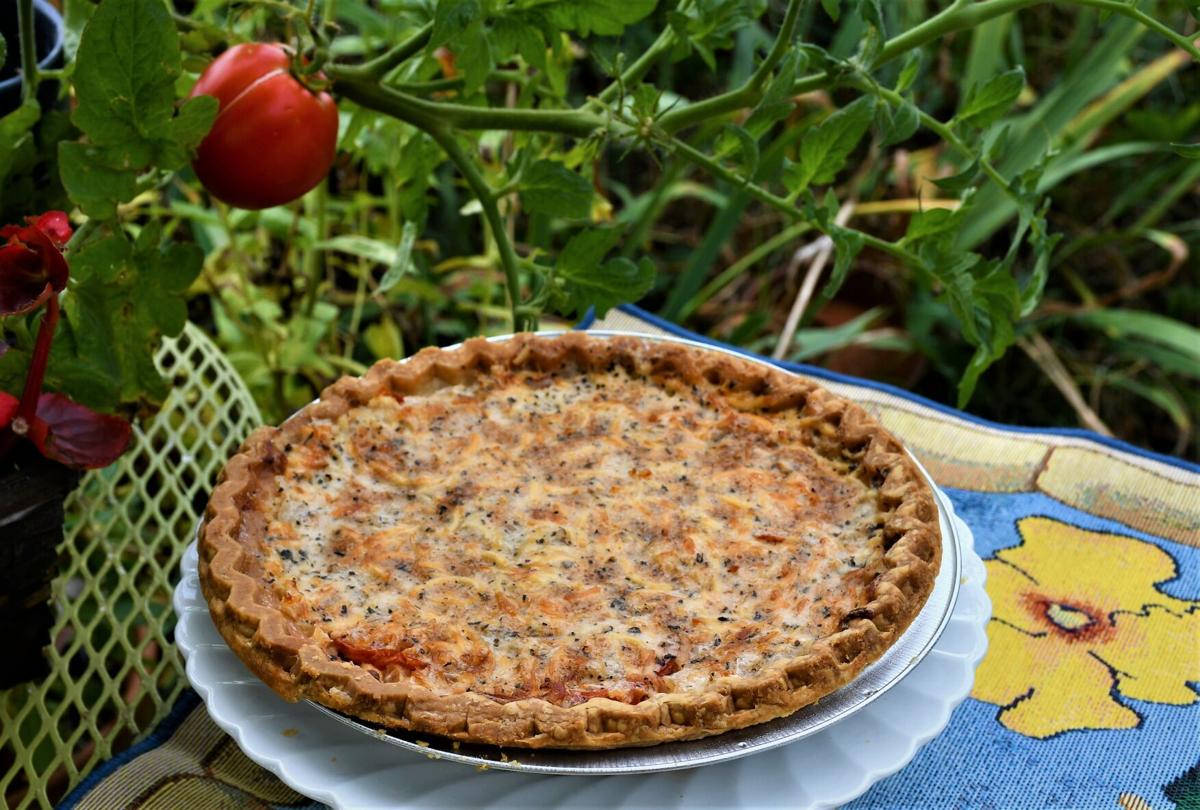 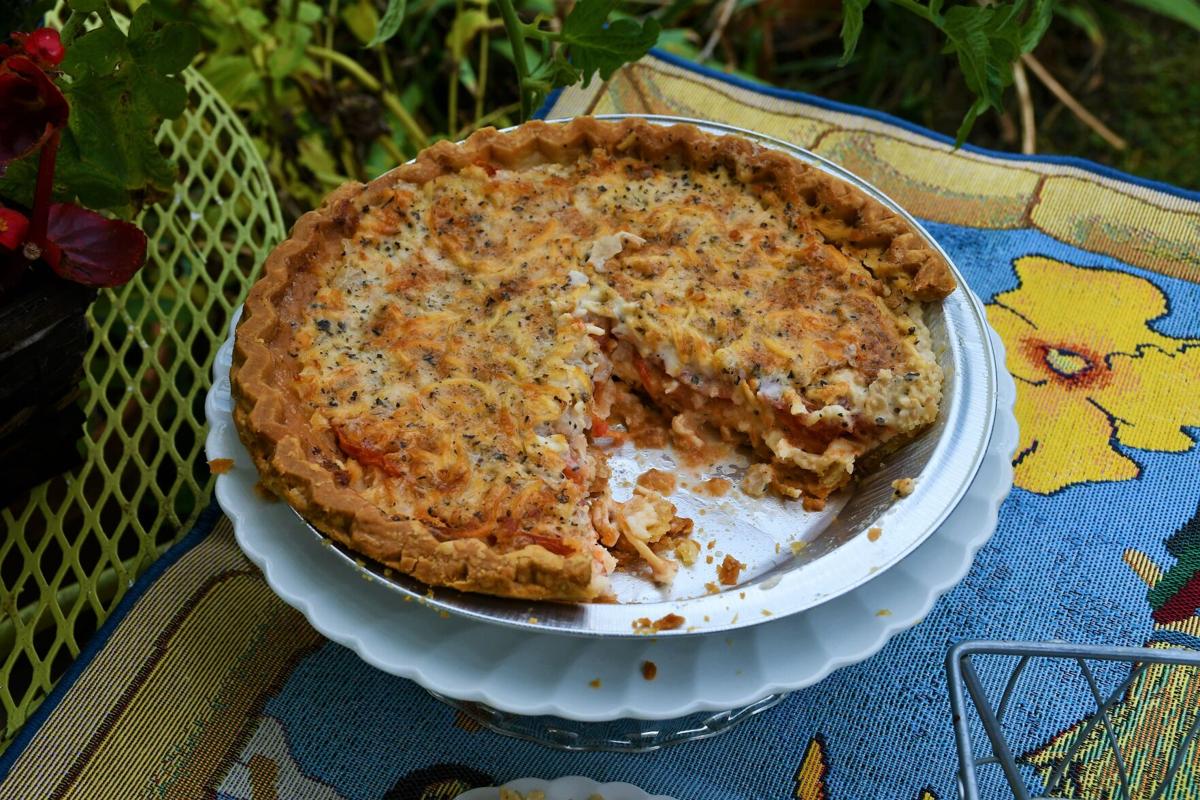 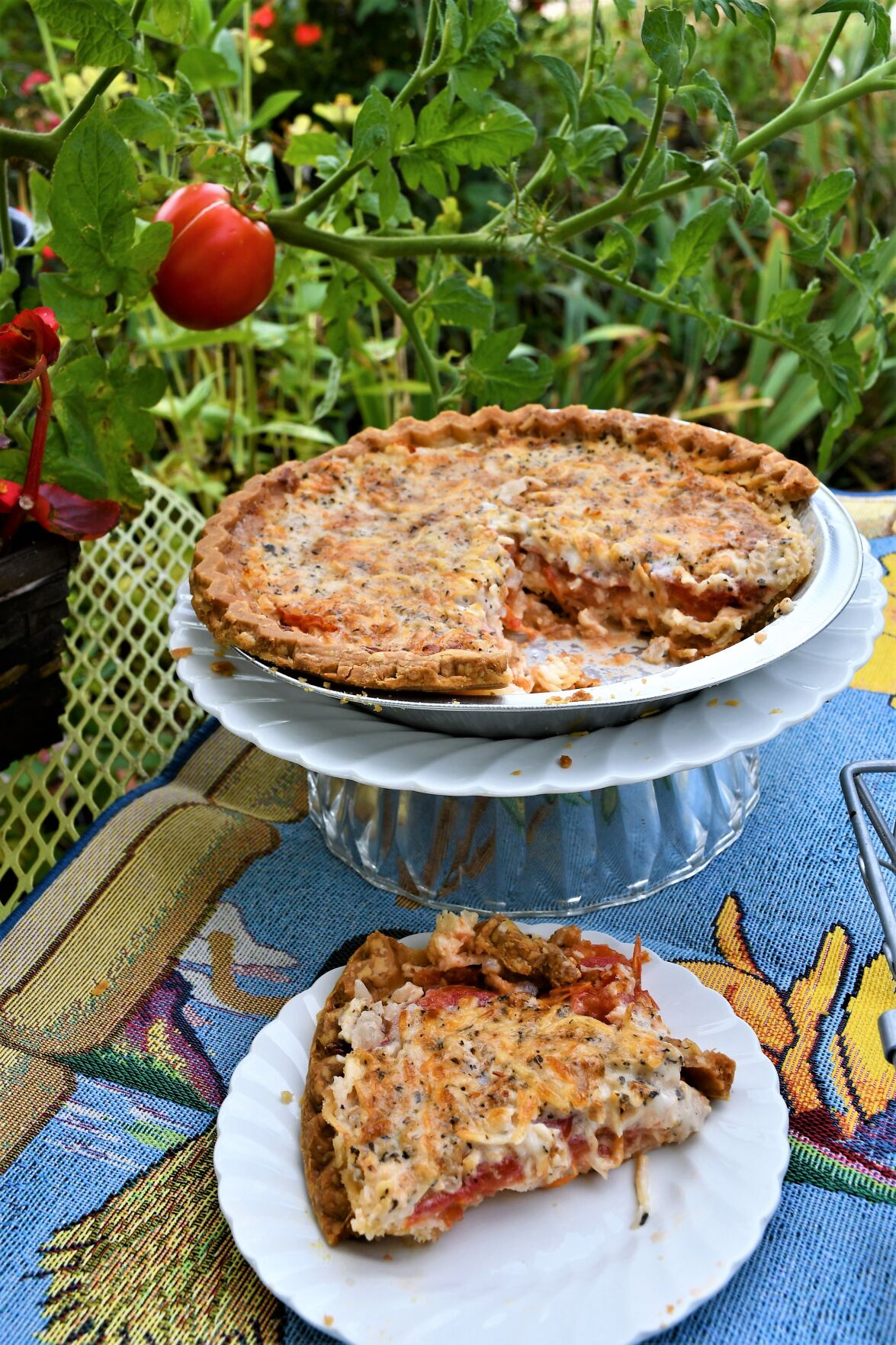 This is a slice of John’s attempt to make the Fresh Tomato Pie recipe his maternal cousins discovered in the August edition of Cooperative Living Magazine, familiar to current or former residents of Southwest Virginia who are customers of Powell Valley Electric Cooperative.

Left: a tomato pie made with Caesar salad dressing.

Right: a tomato pie made with mayonnaise.

I've been trying my hand at making tomato pies, another late summer staple to serve as an appetizer, light lunch or dinner entree.

I have not yet perfected it. It likely will never be a signature dish for me, like it was for my late friend and former fellow columnist Roy H. Odom II.

Roy had shared a beloved recipe with many friends, and his own handmade tomato pies with even more. My attempts at Roy's recipe, which calls for thick-sliced, ripe, heirloom fruits, have turned out tasty, but runnier than I'd like. I suspect it will take a lot of trial and error, especially on the "pat slices dry to remove excess moisture" step.

I've gotten closer to what I think of as proper density for tomato pie with this recipe my cousins have been finding tasty. Mom and I share that assessment. We weren't surprised to find out where Richard found the recipe last month. It was featured in the August edition of Cooperative Living Magazine, published by the Virginia, Maryland & Delaware Association of Electric Cooperatives.

Growing up with roots in Lee County, Va., I have long been familiar with the magazine because it is distributed to members of the Powell Valley Electric Cooperative. But anyone can subscribe for $10 a year. Mom let her subscription lapse several years ago. Cooperative Living's content is available online (this month's recipes are apple-themed), but I'm going to re-subscribe.

The recipe for "Fresh Tomato Pie" in the August issue of Cooperative Living was submitted to the magazine by reader Wendy Lankford, Red Oak, Va. It is in fact tasty and downright delicious. And it's easy to make. I reprint it below with permission from Cooperative Living.

It's a lighter version of tomato pie than Roy's, which includes a cup of Duke's mayonnaise and an egg. Lankford's recipe in Cooperative Living uses Caesar salad dressing as a binder. I couldn't pick one over the other. I'm tempted to make each in a tart pan using a single layer of filling.

5. Sprinkle half the cheese on bottom of cooled crust

salt and pepper to taste

Peel, core and slice tomatoes in thick slices on a platter. Pat dry and remove any excess juice. Mix Duke's mayo, cheddar cheese, salt, pepper, curry powder and egg. Spread about a quarter of the mixture on bottom of pie crust. Sprinkle about a quarter of parmesan cheese next. Place one layer of blotted tomatoes. Spread half of remaining mayo mixture on tomatoes, sprinkle more parmesan. Continue with another layer of tomatoes, spread remaining mayo mixture, and top pie with remaining parmesan and roughly chopped basil leaves.

Place in preheated 350° oven and bake 30-40 minutes or until bubbly. Allow to cool for at least 10 minutes before slicing.

Because Roy specified "ripe, heirloom" tomatoes, I went to the Kingsport Farmers Market and spent $8 on several purple Cherokee and one large "pink German." They were extremely juicy. For the other pie I simply used red Grainger County tomatoes from the grocery store and per the recipe, sliced them very thinly.

Mom and I prefer white pepper in our cooking and baking and I used it in both recipes.

Mom doesn't like sliced onions, so I chopped them where the recipe calls for sliced.

Some of my friends remember it as "Eastman Dip." I'd never heard of it.

I searched online myself of "Eastman dip recipe" and thought I'd struck gold when I found a link to the George Eastman Museum in Rochester, New York.

It's canning and preserving time, but we won't be using the springhouse

While I was helping her make corn relish (not pickled corn) last weekend Mom told me multiple childhood memories the work and final product brought to her mind.

On Passion flowers, AKA Maypops, and picking a mess of greens

About this time each year, I begin to do my best Katherine Hepburn imitation, taking poetic license with one of her most famous film quotes.

Creasy greens, nor dock vs. broad dock, and poke salad

Mom and Aunt Gracie each took a "poke," spoke to Becky Ann and Log and went to the patch of greens.

Move over mac-n-cheese, it's macaroni and tomatoes time

The perfect combination of salty and sweet, of acidity and dairy fat, and the ratio of stewed tomatoes to elbow macaroni are key.

The roots and friends of John B. Dennis

The landscaper and the banker, part II

Part 2 of J.H. Osborne's look back at Mr. and Mrs. John B. Dennis offers details of how the former Miss Lola Anderson came to be in Kingsport in the 1920s.

Several of my longtime interests collide in the story of Mr. & Mrs. John B. Dennis. Two in particular: local history and ... Biltmore Estate.

Back in the day, Thanksgiving was hog-killing time

Did you know that for many folks across our region, at least years ago, Thanksgiving didn’t have anything to do with parade-watching, turkey-a…

A Thanksgiving debate: Stuffing or dressing? Cornbread or another?

A debate among friends began with a Facebook post by Roy H. Odum II. Stuffing or dressing? What do you prefer? Perhaps, most important, is the…

I’ve enjoyed cooking since I was a a child. I’m pretty sure it’s because I’ve always liked to eat. Taking after my father and paternal grandmo…

My memories of 9/11 are both sharp and fuzzy, I realized as I compared notes about that day with by friend Dave Light earlier this week.

Oakwood Super Markets put food — and plates — on our tables

"I just remember when we were kids no matter whose house you went to, they had a bunch of these dishes." - Vicki Cooper Trammell on her late mother's rooster dishes from Oakwood Super Markets.