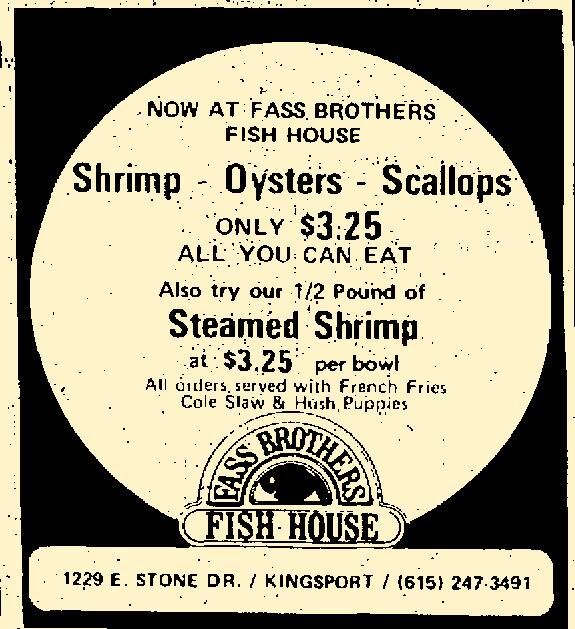 Shown here is an early ad from the Times News for Fass Brothers Fish House, which preceded Chicago Dough Company on Stone Drive. 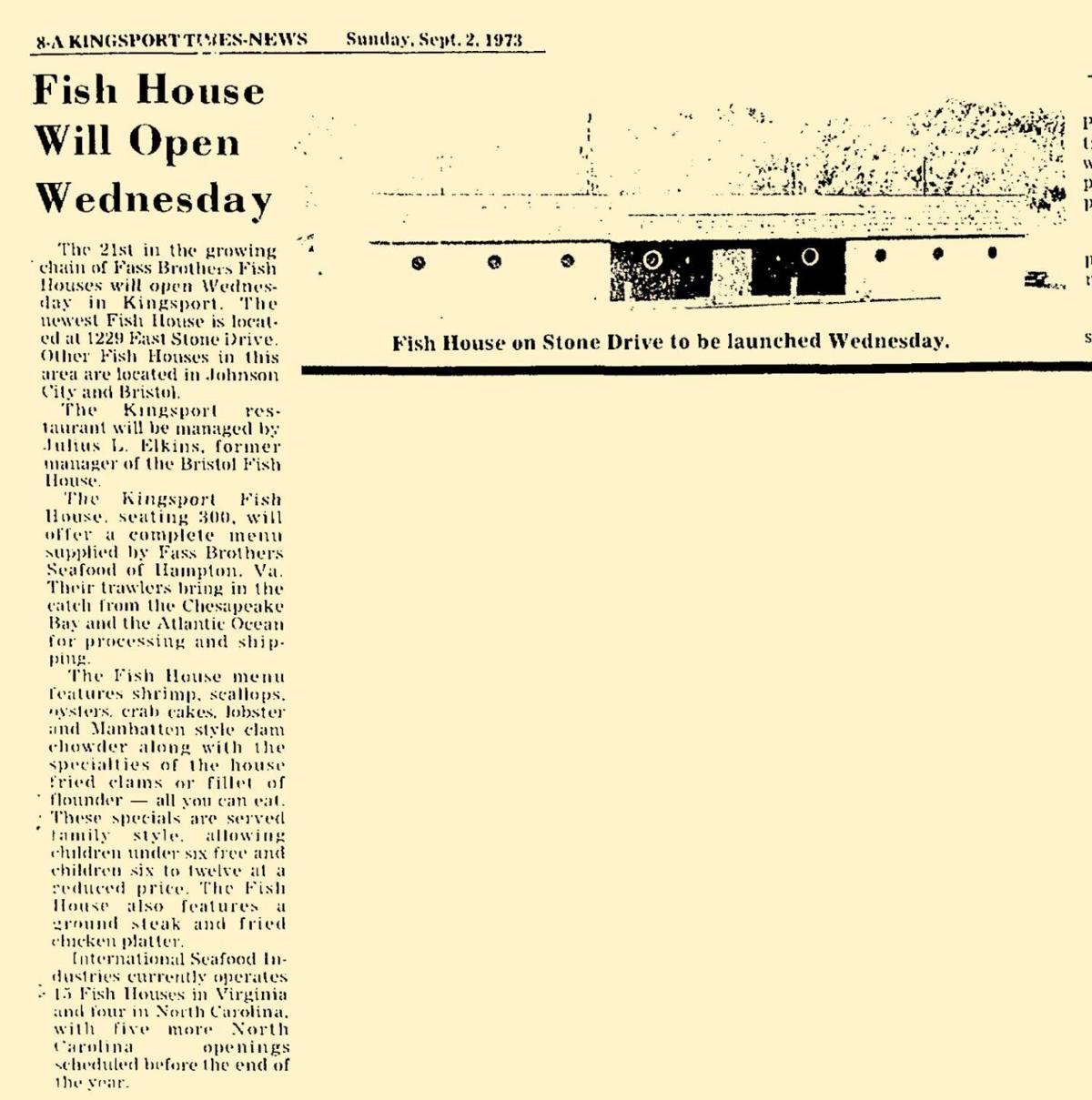 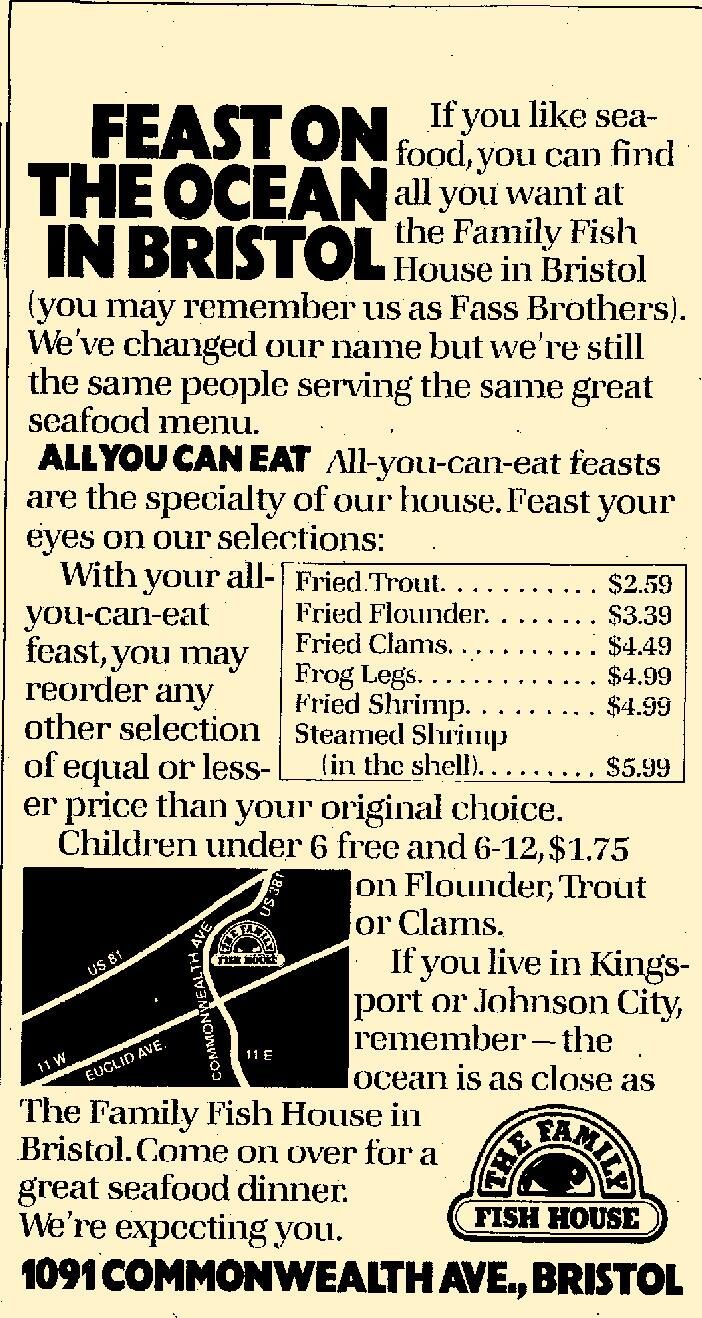 By August of 1977, only one Fass Brothers Fish House location remained in the Tri-Cities and it was in Bristol and operating under the chain's new name, "Family Fish House." 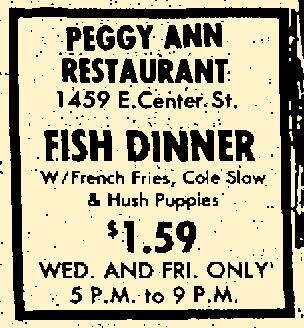 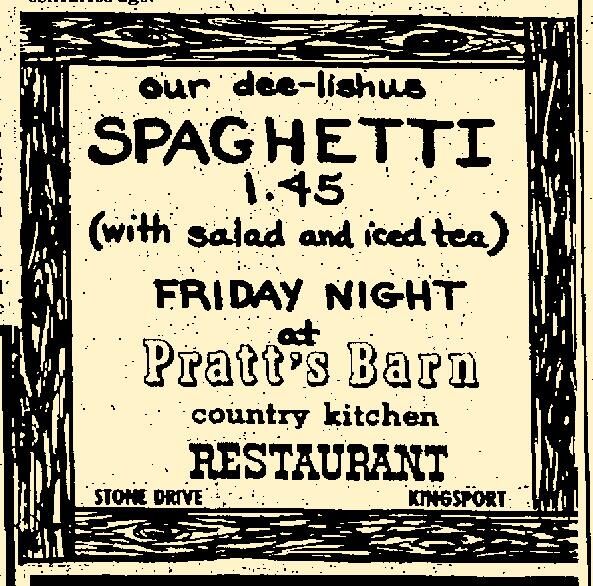 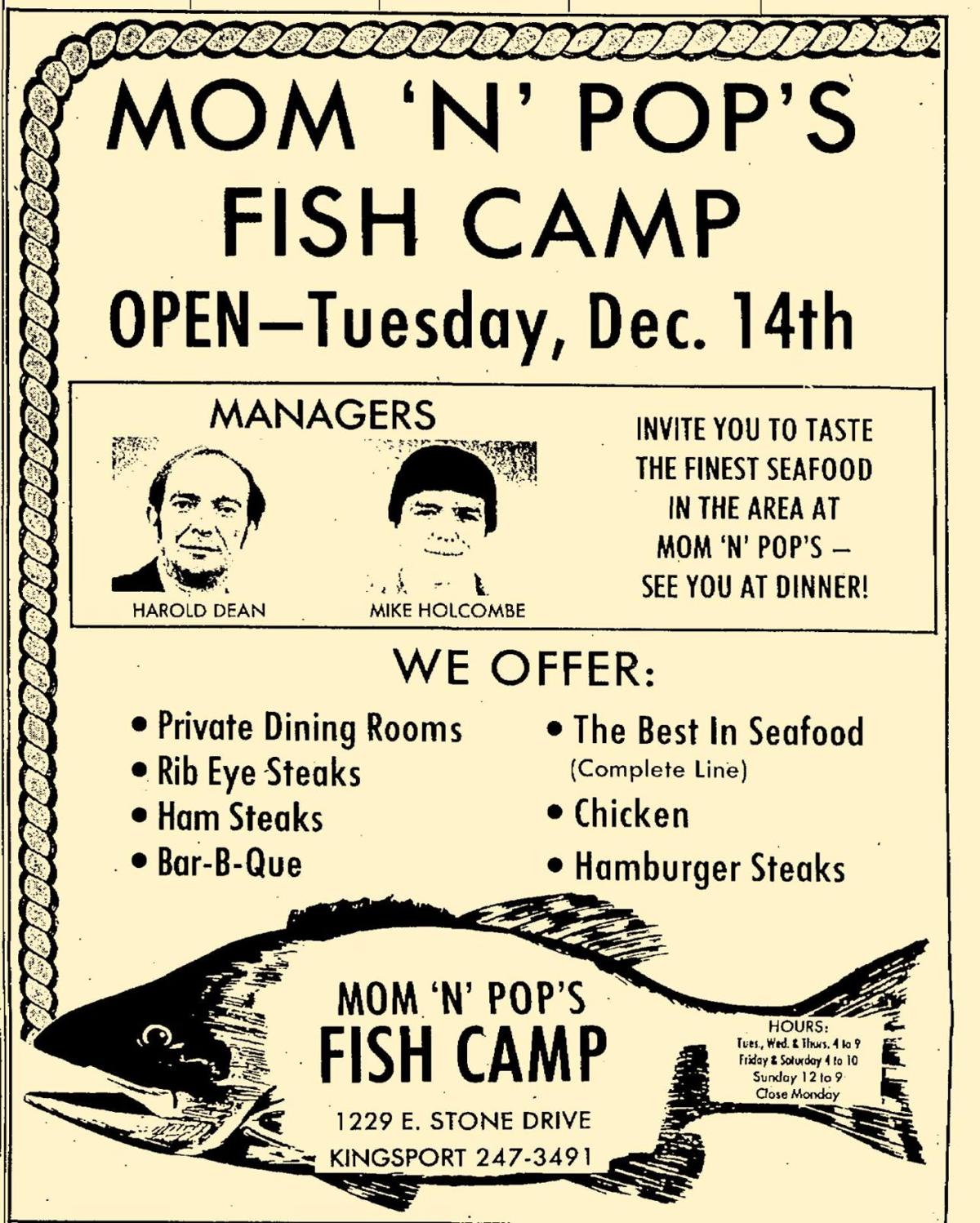 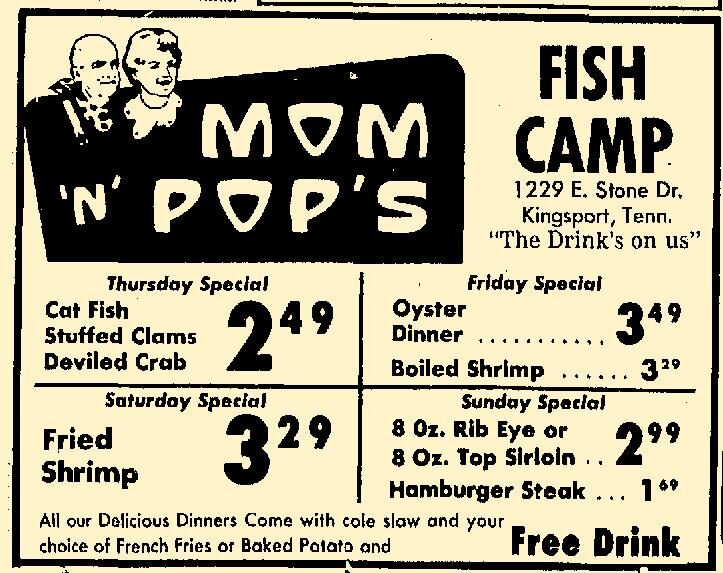 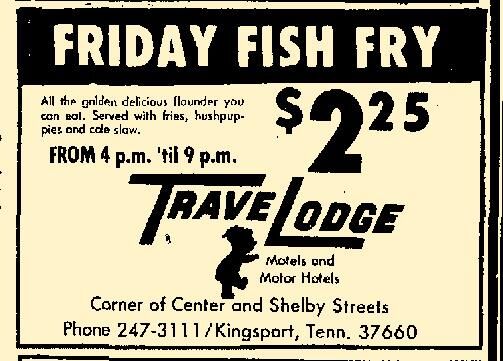 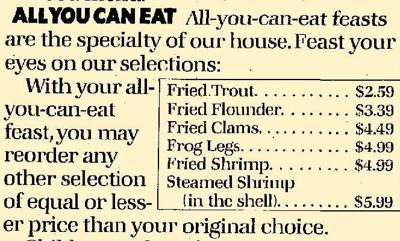 Shown here is an early ad from the Times News for Fass Brothers Fish House, which preceded Chicago Dough Company on Stone Drive.

By August of 1977, only one Fass Brothers Fish House location remained in the Tri-Cities and it was in Bristol and operating under the chain's new name, "Family Fish House."

A lot of people have a lot of memories about recently closed Rush Street Neighborhood Grill and its predecessor, the Chicago Dough Company.

I’ve had trouble finding many people who remember those were the fourth and third eateries, respectively, to occupy the site

Before pizza became a local mainstay for 41 years there, seafood made the first splash and second wave in the building’s rectangular core (then with round, porthole-like windows across the front).

When it was first announced a new restaurant would be built at 1229 E. Stone Drive, “just east of Pratt’s,” in Kingsport, it barely made it onto the front page.

In fact, it was just an “also,” which I’d more likely call an “in other business.”

The big business news on the front page of the Kingsport Times News that day was K-Mart officially was coming to town.

Nine paragraphs and a lot of K-Mart details later, and just before “the jump,” finally it was mentioned the planning commission also approved plot plans for:

“A 340-seat Fass Brothers Fish House Restaurant on Stone Drive just east of Pratt’s Barn. A spokesman for the chain, headquartered in Virginia Beach, has 12 seafood restaurants in operation in Virginia and an equal number in North Carolina, with restaurants under construction in Bristol and Johnson City. The company catches and processes its own fish, he said. It offers all kinds of seafoods, plus ground beef and chicken. This is not a franchise operation, he said; the chain operates all the restaurants itself.”

That report was from February 1973.

A story in the Times News announcing the upcoming opening gave different and additional information from that February article.

The Fass Brothers locations in Bristol and Johnson City already had opened. The Kingsport Fass Brothers, with seating for 300, was touted as the 21st in the growing, Hampton, Virginia, based chain. It’s opening manager would be Julius L. Elkins, former manager of the Bristol location.

“The Fish House menu features shrimp, scallops, oysters, crab cakes, lobster and Manhattan style clam chowder,” according to the article, and specialties of the house were fried clams and flounder “all you can eat.”

Those specials were served “family style.”

I searched old copies of the Times News for more information about Fass Brothers Fish House. In February 1974, I found an advertisement offering all you can eat shrimp, oysters and scallops for $3.25. On the same page, Peggy Ann Restaurant advertised a fish dinner, with fries, slaw and hushpuppies for $1.59 from 5 p.m. to 9 p.m. on Wednesdays and Fridays. Pratt’s Barn had an ad on the page as well, for Spaghetti Night each Friday: $1.45 would get you spaghetti, a salad and iced tea.

I searched Facebook for mentions of Fass Brothers and found a 10-year-old post by Mark Dorr, on the “You know you grew up in Kingsport if ...” group’s page. Dorr had asked if anyone else had memories of Fass Brothers. Several people commented. I reached out to Mark and a couple of the others.

“I did like working there as it was my first W-4 paying job. I was 15 years old, and initially worked as a busboy then in the kitchen. During the summer I worked daily food preparation. I earned minimum wage which was $1.65/hr. It was busy on the weekends especially on Sunday after church. I think what I learned the most from working there was to work with others as a team. Most of the staff were high schoolers some of which I already knew. Most high school staff were from Lynn View, which is where I went at the time, Dobyns-Bennett and Central. The general manager was Gary Burgess (not too sure about the spelling) and he was great to work for. The assistant manager was Don. I don’t remember his last name, but he was great to work with too. The waitresses wore dark blue nautical themed dresses and white hat. There was a large aquarium in the front entryway. A hostess greeted and seated everyone. I found a copy of two menus online. One is shaped like a fish which is the one I think we used. There is also a picture of the outside of a Fass Brothers building that looked very similar to the one in Kingsport.”

Dorr later transfered to D-B and says he has kept in touch with some of those people from all three schools through Facebook.

I’m not sure what happened, but by December 1976 Mom ‘n’ Pop’s Fish Camp was opening at 1229 E. Stone Drive and in an advertisement managers Howard Dean and Mike Holcome were inviting customers to “taste the finest seafood in the area.”

By August of 1977, only one Fass Brothers Fish House location remained in the Tri-Cities and it was in Bristol and operating under the chain’s new name, “Family Fish House.”

In 1979, Mike Feliu’s then-partner in a couple of restaurants in Chicago brought Feliu to Kingsport, suggesting they open a third location here.

Oh. Back in September 1973, the article about the opening of Fass Brothers was on a page dominated by a going out of business advertisement for Tri State Department Store, a stone’s throw away.

KINGSPORT, Tenn. – It was in kind of a roundabout way that Mike Feliu came to Kingsport.

After 41 years in Kingsport, Rush Street Neighborhood Grill offered one last day of food and memories on Thursday.

Rush Street Neighborhood Grill in Kingsport is set to close. The final day of operation is set for Thursday, Oct. 14.

The city of Chicago is well represented inside Rush Street Neighborhood Grill. From the blac…

In early 1975 more than 100 restaurants were included in a "dining" options list in the Times News. across the Tri-Cities region. Guess how many still exist.