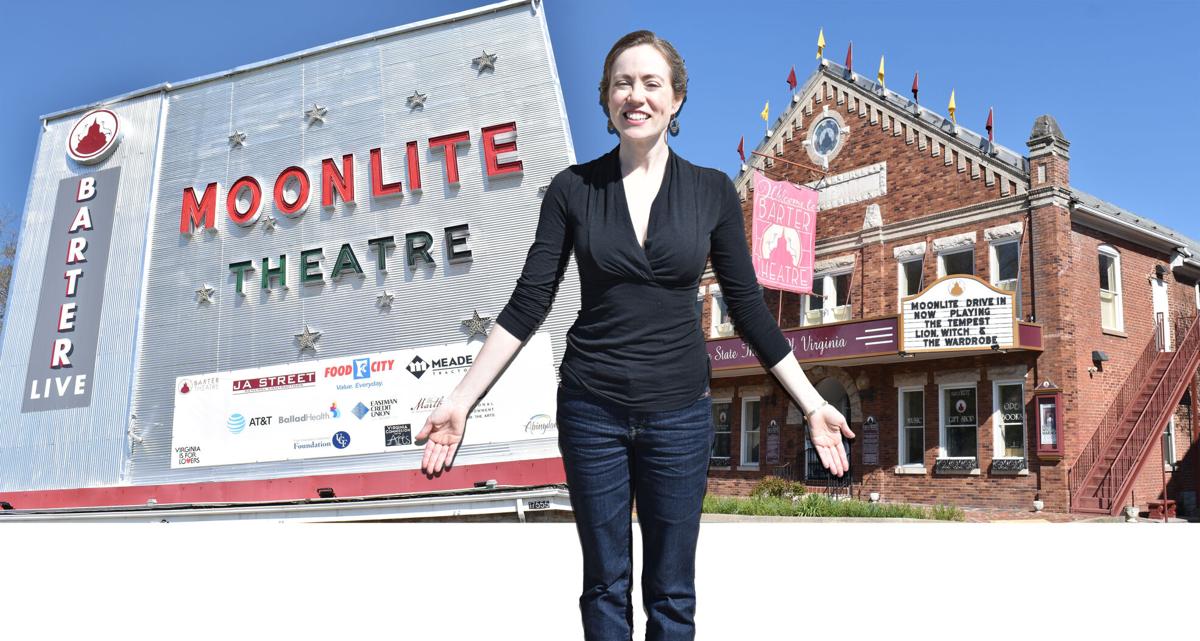 Katy Brown’s first year as artistic director at the historic Barter Theatre was a challenge. Productions transitioned to the Moonlite Drive-in after the pandemic forced the closure of entertainment venues. 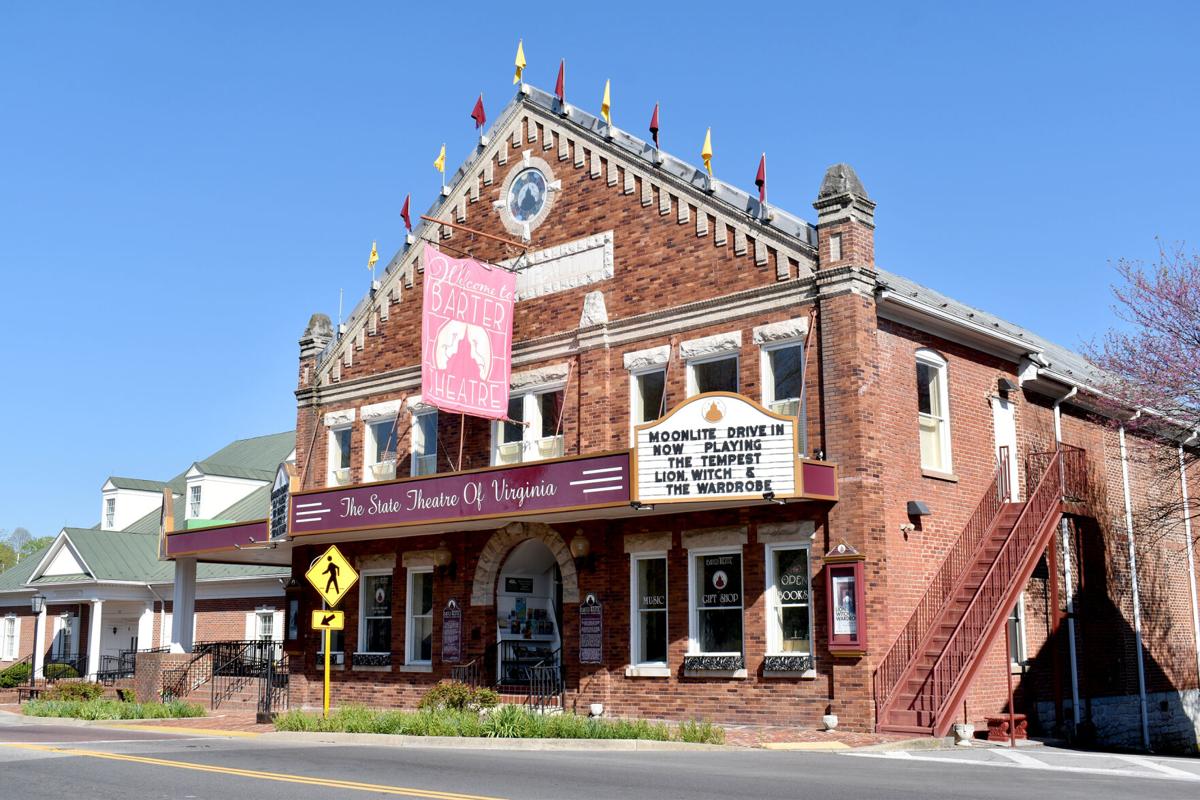 The historic Barter Theatre is located on Main Street in Abingdon, Virginia. 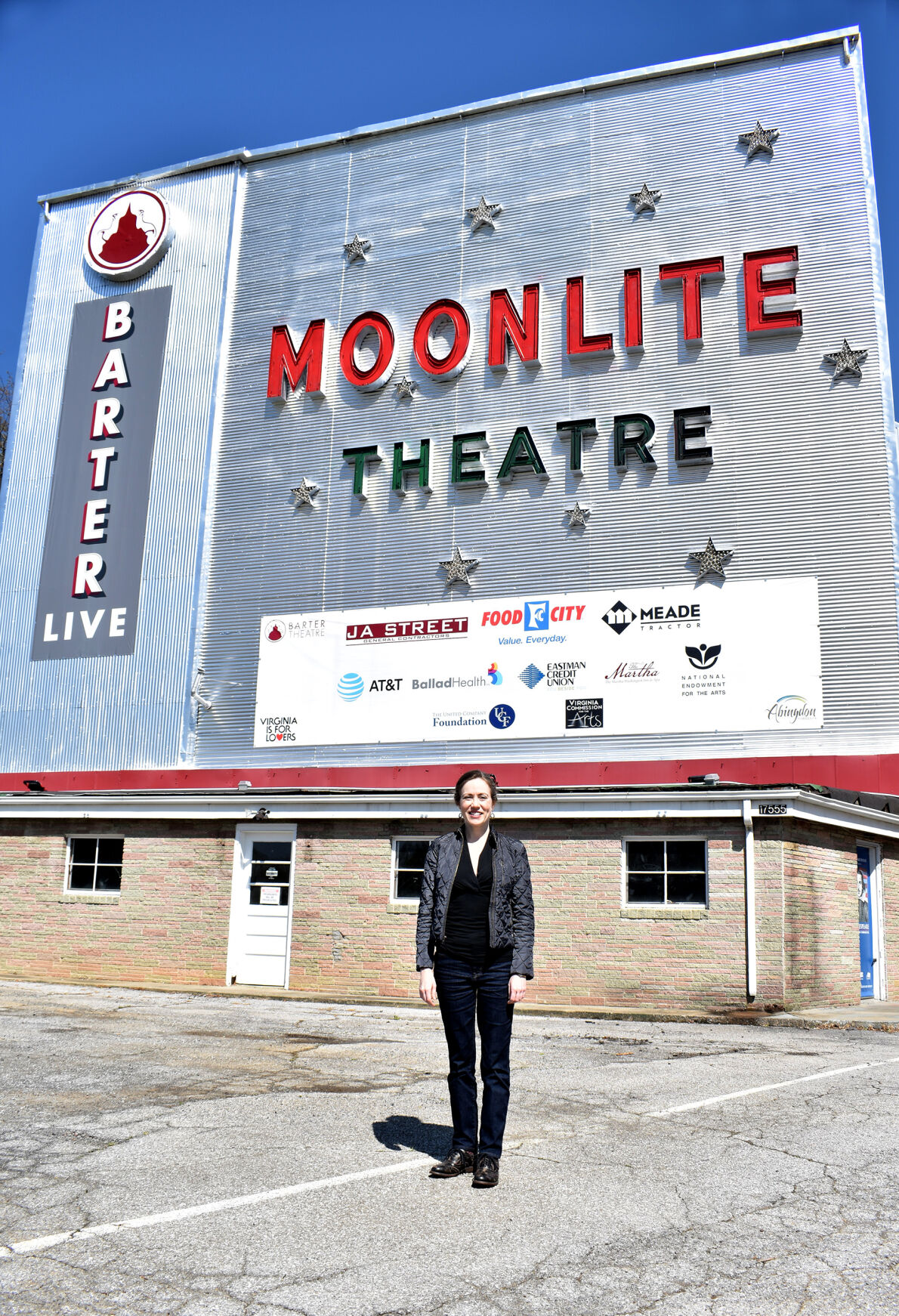 Productions moved to the Moonlite Drive-in in 2020 after indoor entertainment venues shut down due to the pandemic. 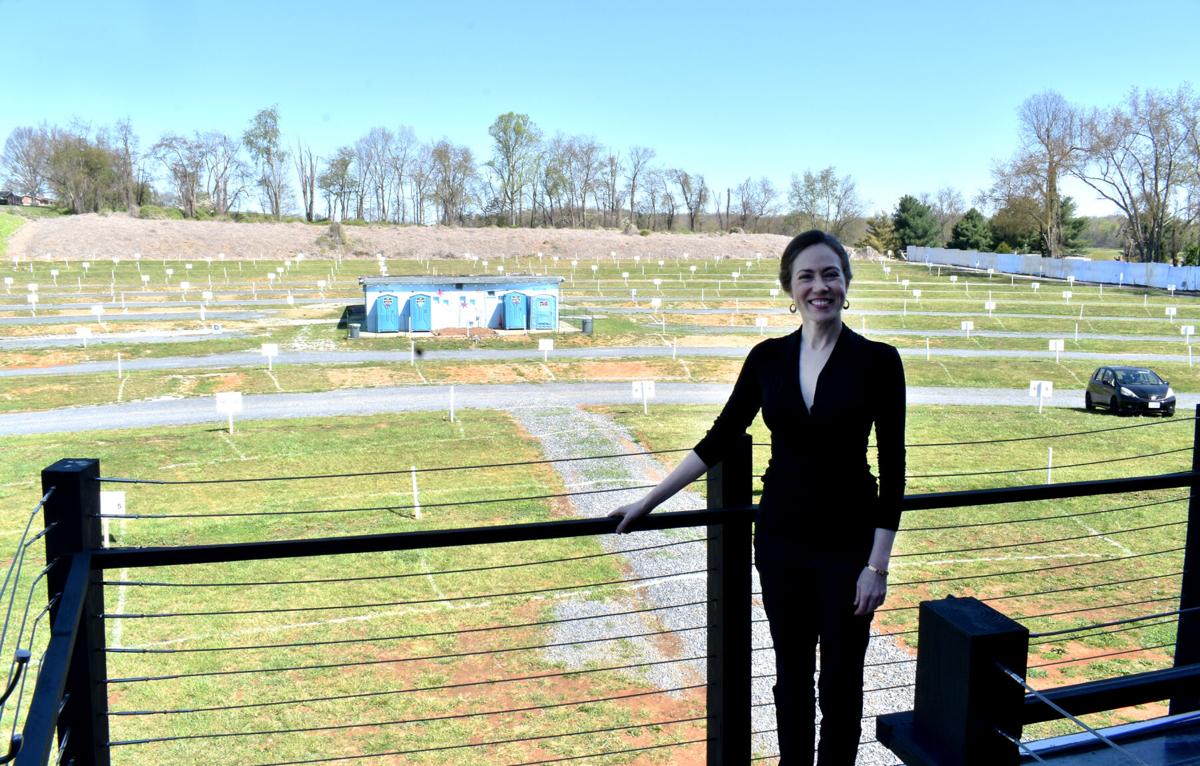 An unused drive-in theater helped Barter adapt to the pandemic with a new venue reminiscent in some ways of the theater’s Depression-era innovation, said Artistic Director Katy Brown. 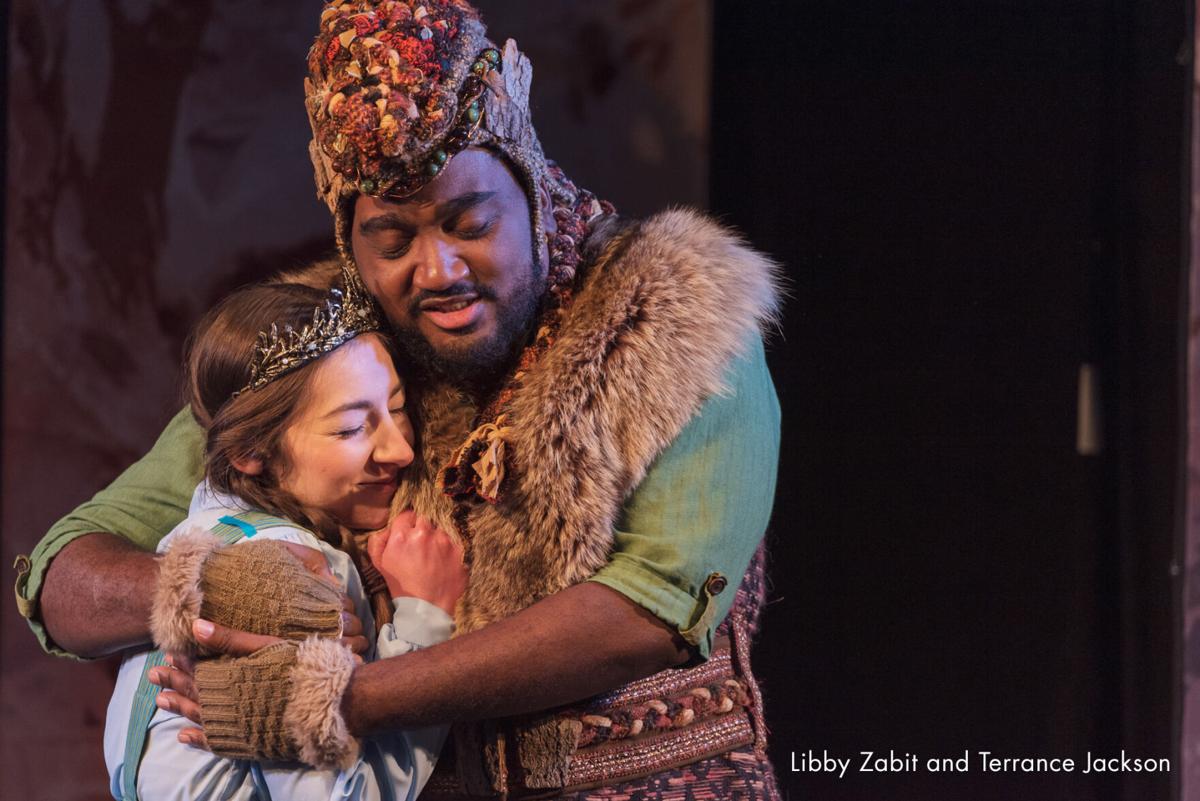 ‘The Lion, the Witch and the Wardrobe,’ starring Libby Zabit and Terrance Jackson, is on stage through May 15 at the Moonlite Drive-in. 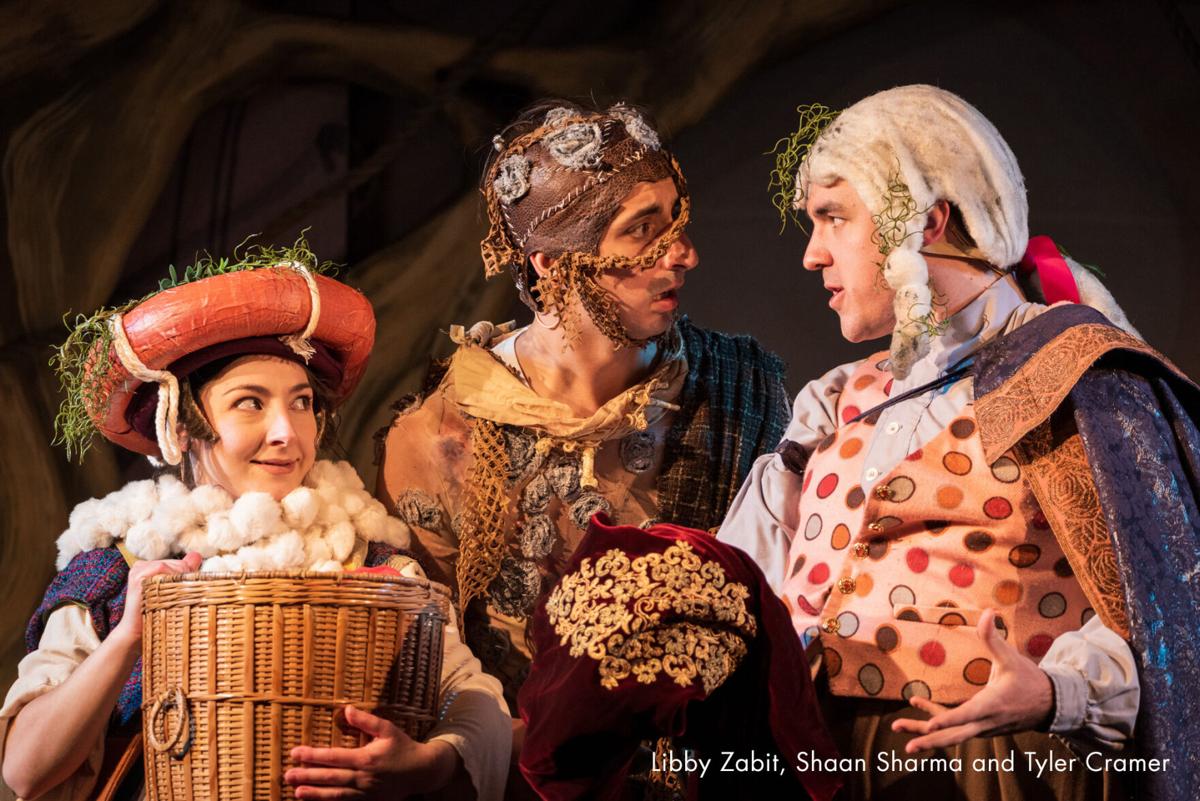 Katy Brown’s first year as artistic director at the historic Barter Theatre was a challenge. Productions transitioned to the Moonlite Drive-in after the pandemic forced the closure of entertainment venues.

The historic Barter Theatre is located on Main Street in Abingdon, Virginia.

Productions moved to the Moonlite Drive-in in 2020 after indoor entertainment venues shut down due to the pandemic.

An unused drive-in theater helped Barter adapt to the pandemic with a new venue reminiscent in some ways of the theater’s Depression-era innovation, said Artistic Director Katy Brown.

‘The Lion, the Witch and the Wardrobe,’ starring Libby Zabit and Terrance Jackson, is on stage through May 15 at the Moonlite Drive-in.

ABINGDON, Virginia — Katy Brown’s first year at the helm of the Barter Theatre turned the 89-year-old Southwest Virginia institution inside out — literally.

“It was a year ago today that I went out to the Moonlite Drive-in to scout it out,” Brown said Monday as she recounted the Barter’s pivot from nine decades of indoor performances at its Main Street location to coping with COVID-19 and statewide closures of performance venues.

Brown had become Barter’s artistic director in November 2019 after two decades acting, directing, casting and ultimately running the theater’s Barter Players performing company. While overseeing Virginia’s official state theater as only its fourth director in nine decades, she found herself in March on the state’s task force on how to reopen the state as COVID-19 forced a shutdown of Barter.

As a firsthand observer of the challenges facing theaters and performers across Virginia, Brown and her performers and crew found themselves busy wondering about their own future.

“I didn’t want to endanger anyone,” Brown said Monday while sitting in the empty 507-seat Barter main theater. “I felt incredibly passionate about that, so I felt outside might be possible. But at that time, we knew so little. I didn’t necessarily feel good about people sitting near each other either or turning our ushers into bouncers.”

Hearing how area churches had started doing drive-in services and that some European theater venues were doing similar events, Brown began looking at parking lots and fields in the area.

“We all remember going out to the Moonlite when it was running, and it was so much fun — and that was really the dream,” said Brown. “I went out there a year ago today and did a panoramic video. It had not been running for a while, and it was in tough shape.”

The Moonlite’s owners had found themselves facing the movie industry’s switch to digital projection a few years earlier. Unsuccessful attempts to fund upgraded projection equipment had left the Moonlite closed and in disrepair, as Brown discovered that day.

“All of the sound poles had been bashed in, and people had ripped out the copper wiring,” Brown said. “There were things falling down. There was rusted metal everywhere. But I thought what if people love it so much, people love Barter so much, is there a way we could do this?”

There was a way, as Brown found area businesses and volunteers helping overhaul the Moonlite. A new stage complex built on shipping containers grew in front of the Moonlite’s screen. Speaker poles became “seat” and “row” markers for theater-goers’ cars. Camera platforms were built on the new stage so performances could be projected on what was once a movie screen.

“It really looks like a different place,” Brown said. “You’re able to drive in, completely touchless, park in your spot. You dial in with your car radio for the sound. You see actors up on the stage, and we’ve learned all about live TV — essentially, to be able to shoot closeups onto the screen thanks to (Barter Players’) Rick McVey.”

Applause for Barter productions has adapted to the pandemic as well.

“People bring cowbells to the Moonlite and ring them when applauding, and they flash their car lights and honk their horns,” Brown said as she later looked over the new theater “seating.” “The actors love it.”

“It was one of the first times people came out and said it was the first time they had felt normal in months — being able to flash your lights and honk your horns with somebody while you’re watching,” Brown said. “You’re able to respond in real time. You’re able to participate with people but still in a way that’s safe for everyone. We’ve been incredibly grateful.”

One thing is still missing from the outdoor performances, Brown acknowledged — the coffee cup for the guest making the longest trek to Barter.

“Right now, the prizes are Moonlite popcorn, but we’re looking forward to bringing back the cups when we can reopen the Barter main theater,” she said.

Brown said the switch from what had become a somewhat formal theater experience for many seemed to go back to Barter’s 1933 Depression roots, when founder Robert Porterfield offered patrons admission to the theater by bartering food and livestock.

“There’s a picture that I just kept going back to of people bartering produce,” Brown said. “A friend of mine said that this was Porterfield-level crazy what we were doing, and that felt like a vote of confidence to me.”

Barter Theatre is winding down its spring season with two slices of English literature — Shakespeare and C.S. Lewis. “The Tempest” will run at the Moonlite through May 14, and “The Lion, the Witch and the Wardrobe” through May 15.

Brown said the spring season will wrap up with an end-of-school treat for children and adults.

“Alice in Wonderland” opens May 21 and will run through June 5, and Brown said the technical lessons learned from a year of outdoor performances will show in the sets and special effects.

Barter’s summer season opens June 19 with the return of “Always ... Patsy Cline” and Barter Players actors Kim Morgan Dean and Tricia Matthews. “Always ... Patsy Cline” marks the first time the Barter Players have been able to return to the stage since the pandemic. Brown said professional acting companies across the U.S. had not been able to take to the stage because of actors’ union rules related to the pandemic.

“We thought it would be really perfect for the Moonlite,” Brown said. “We have a lot of new patrons out there, but who doesn’t love Patsy? We’ll have some great music out under the stars and also for our seasoned Barter folks who really are excited to see our actors.”

Barter enthusiasts can expect plenty of music during the summer season, Brown said.

“At the end of the summer we’re doing a concert series so people can tailgate under the stars and listen to their favorite actors sing their favorite music,” she said.

“Doo Wop at the Drive-in” will feature girl group hits of the 1950s, the 1960s and beyond, and “Barter Sings Broadway” gives the Barter Players the chance to belt out Broadway musical favorites.

Changing pandemic conditions have led to announcing each lineup by the seasons of the year rather than by theater season.

“We’re announcing seasons one at a time so we can figure out when we can be back here in the theater,” said Brown. “I think there are possibilities to be in the theater for the fall. We very much hope by Christmas, but it needs to be both safe and economically feasible for us to do it. People have been very wonderful and excited as we’ve rolled things out one season at a time. In the late summer we’ll be able to announce fall and, in the fall, announce Christmas.”

“We want to be able to serve this community and we wanted to do it in the middle of a very difficult time in America, and that’s what (Porterfield) did.”

The Moonlite Drive-in is located at 17555 Lee Highway in Abingdon. Barter’s lineup is listed below. Tickets are on sale now and can be purchased online at www.bartertheatre.com or by calling the Barter box office at (276) 628-3991.

“The Lion, the Witch and the Wardrobe”: through May 15

“Alice in Wonderland”: May 21 through June 5