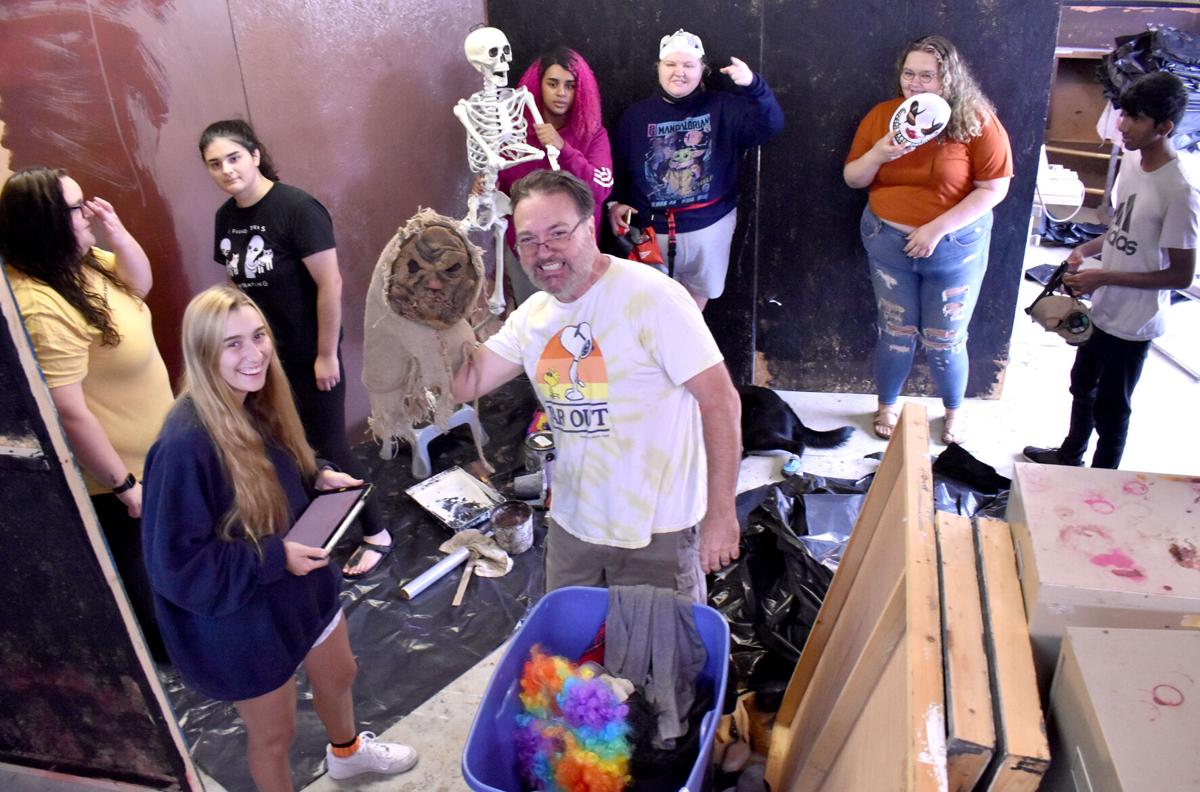 UVA Wise Theater Department chair Ben Mays, center, with his Special Topics class as they work on Forbidden Fairgrounds for an Oct. 8 opening. 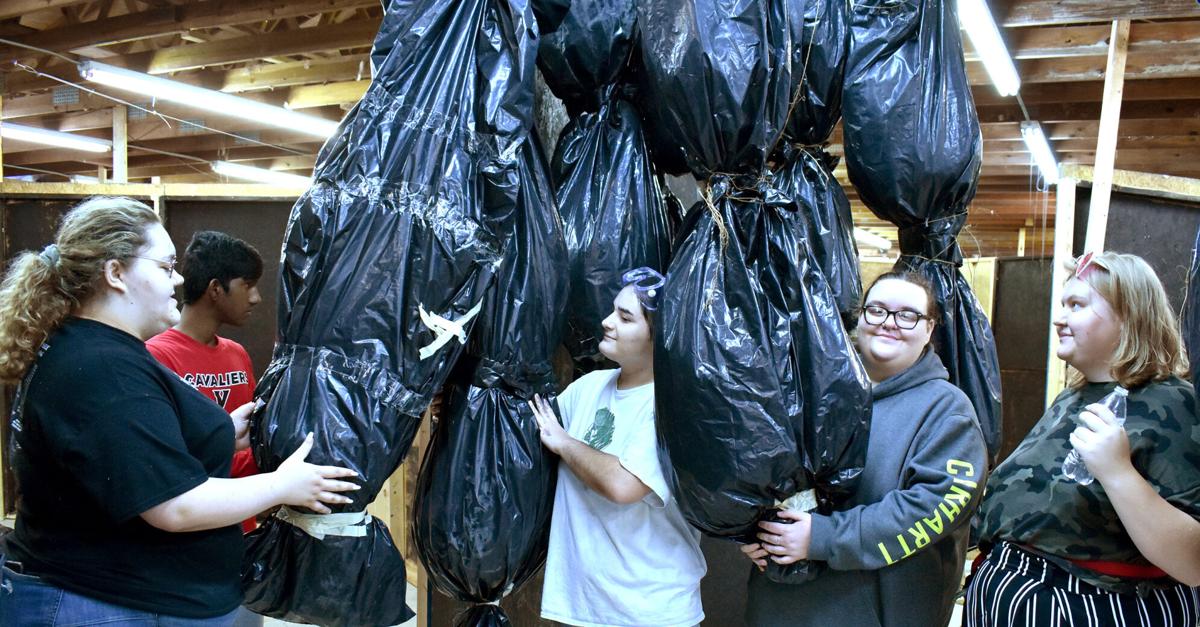 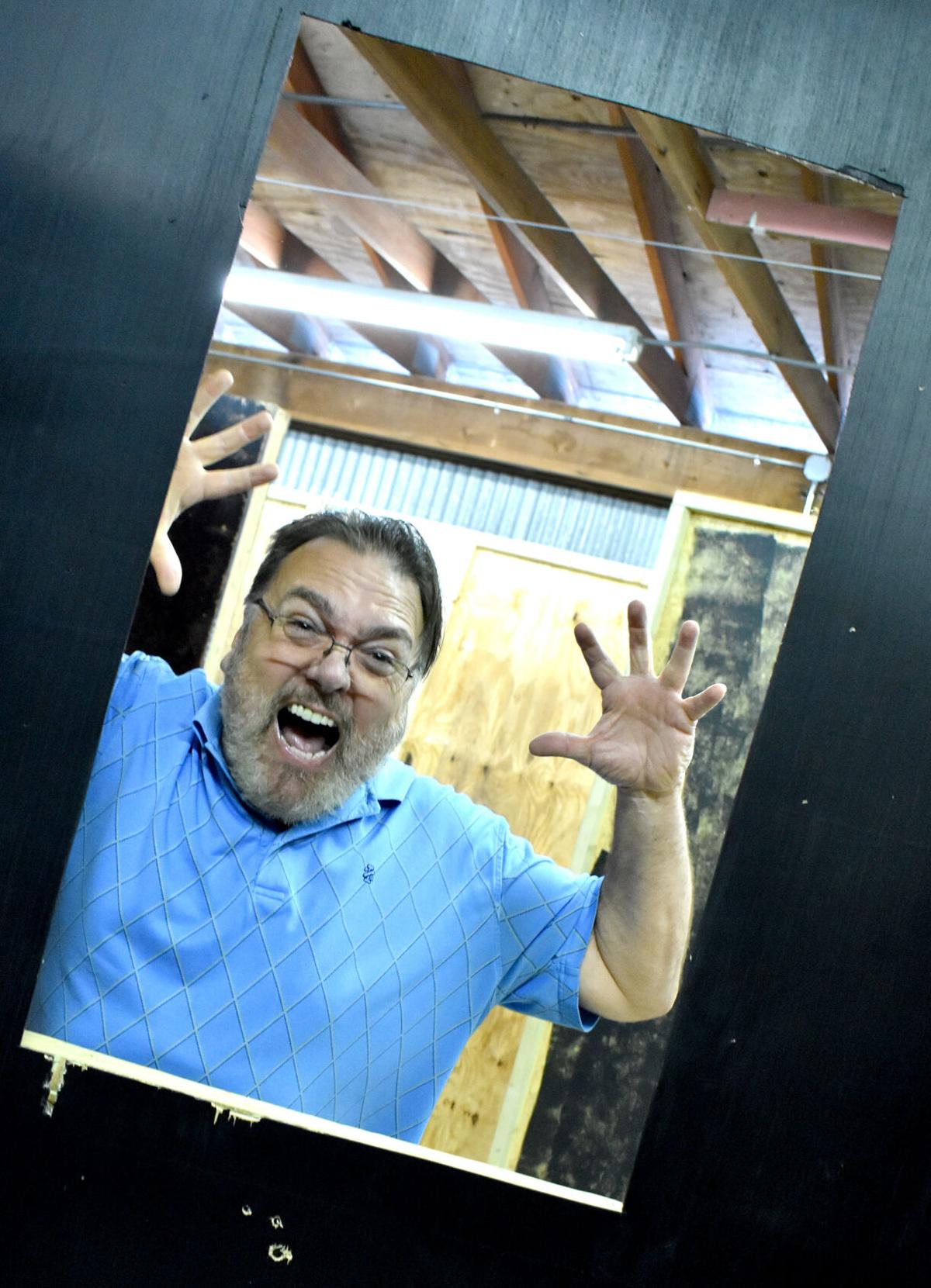 UVA Wise Theater Department Chair Ben Mays demonstrates one of the surprises guests can expect when they attend Forbidden Fairgrounds. 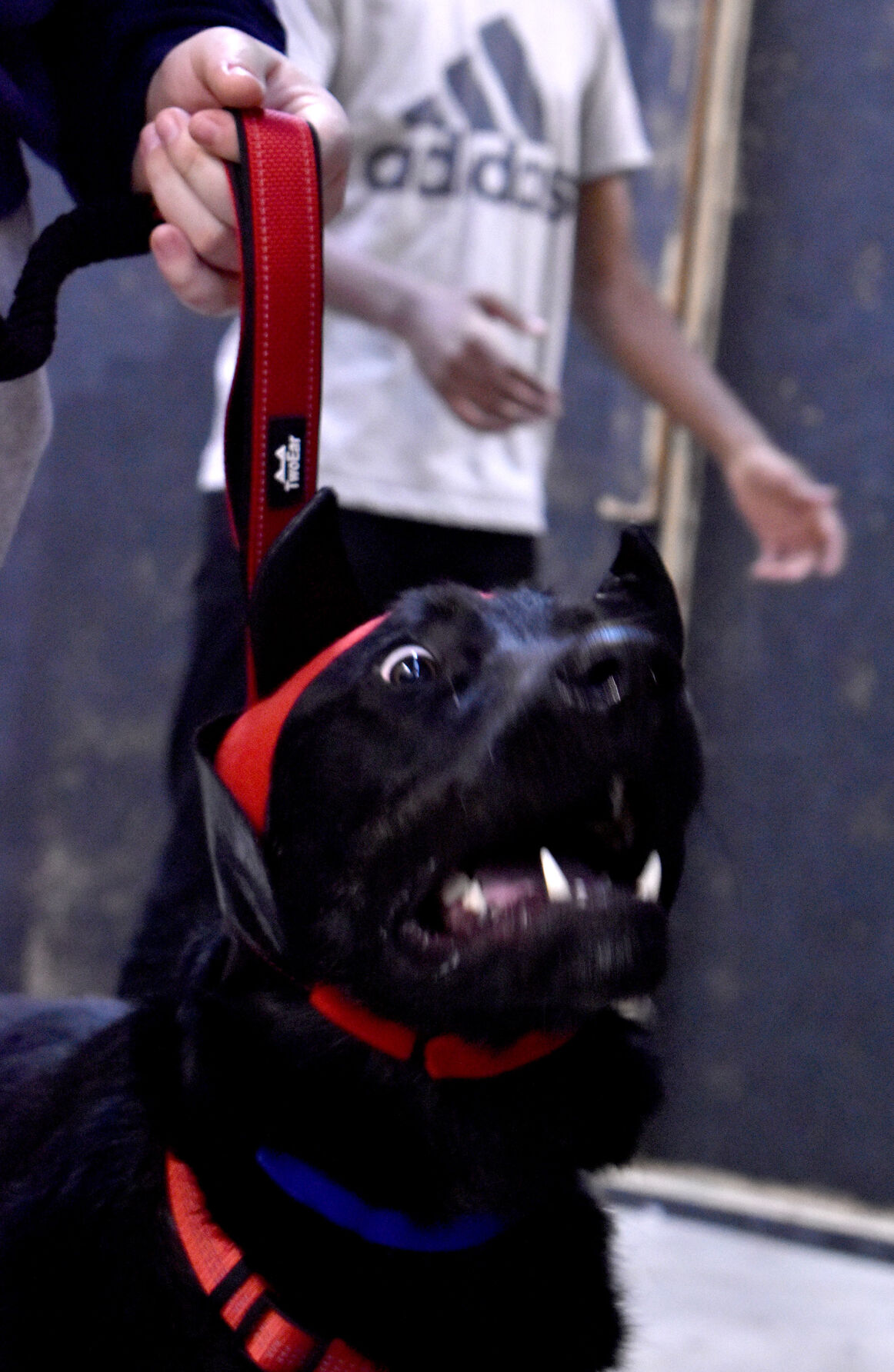 Scamp gets in character for his role as Cujo the Hell Hound in Forbidden Fairgrounds at the Wise County Fairgrounds starting Oct. 8 on weekends through Halloween.

UVA Wise Theater Department chair Ben Mays, center, with his Special Topics class as they work on Forbidden Fairgrounds for an Oct. 8 opening.

UVA Wise Theater Department Chair Ben Mays demonstrates one of the surprises guests can expect when they attend Forbidden Fairgrounds.

Scamp gets in character for his role as Cujo the Hell Hound in Forbidden Fairgrounds at the Wise County Fairgrounds starting Oct. 8 on weekends through Halloween.

WISE — One of the scariest courses at UVA Wise this fall is not accounting or organic chemistry.

Theater Department Chair and Professor Ben Mays and his students in Special Topics in Theater this fall are turning part of the Wise County Fairgrounds into a Halloween “Forbidden Fairground.”

With the help of the college’s Cavaliers baseball team, Mays and his students set up dozens of plywood and particle board flats a week ago in a maze designed to disorient visitors and lead them into a warren of unease, chills and old-fashioned frights each weekend in October.

“Two years ago, it was an idea that my colleague Michael McNulty and I had,” Mays said Thursday as he directed his class to turn those flats into a Halloween netherworld. “He and I both have an interest in magic and haunted houses, and we talked a lot about our haunts growing up with kids and what makes a great haunted house.”

Seasonal haunted houses can range from family-friendly jump-scare events into more extreme venues, Mays said. This fall’s Special Topics in Theater evolved from a two-year collaboration with an area high school baseball team for a Halloween fundraiser, Carnevil, he added, but the COVID-19 pandemic forced a break in the event.

“This year, we decided to get a fresh start and came up with Forbidden Fairgrounds,” Mays said. The Wise Fairgrounds Committee, as with Carnevil, has helped with providing the fairgrounds exhibition and Old MacDonald’s Farm, he said, and experience over the past three years helped evolve the Special Topics course to cover students’ work on the project.

“One thing led to another and here we are,” Mays said. “We actually both teach it, in a sense. I bring in different people to talk about different things.”

The course has proven popular, Mays said, with most of this year’s class returning from the last class in 2019. Each class’ experience with their haunted house can be reviewed, fine-tuned and turned into a base of knowledge for the next class even as they develop their own haunted house concept in following years.

“We talked about everything before we came up and did it, what makes a good scare, the whole concept of scaring forward and not backwards, jump-scares, how do you scare without touching because we try to be a no-touch house,” Mays said. “They’re doing the academic side of it, but they’re also getting on-the-job training.”

Students and volunteers are encouraged to create a backstory for characters they may play in Forbidden Fairgrounds, Mays said, but the students also work to create a concept where the characters and rooms work together to scare and entertain guests.

The Forbidden Fairgrounds has its own traveling set of props. Where VA-KY District Fair attendees in the summer come to see prize-winning vegetables, preserves and crafts, the display cages are filled with Gothic decorations, masks, medical mannequins, plastic sheets taped and tied to resemble shrouded bodies and other props.

Each student worked on their own section of Forbidden Fairgrounds in preparation for opening weekend Oct. 8. Chemistry major and returning volunteer/class member Mo Lees was busy applying a sickly brown paint to flats in her section.

“I’m going for a sensory experience,” Lees explained. “I’m trying to make rooms that aren’t as jump-scary, that you touch something and it grosses you out. It’s not outwardly scary like a vampire or a werewolf, but you know there’s something wrong with the room and you don’t know what it is.”

Erin Musick worked on plans for the venue. Mays said that, in the first year of the course, students compiled their own notebooks of research, set and prop designs. That process took a modern turn in 2019, when UVA Wise began issuing iPads to students and Musick’s notebook was her iPad.

Psychology major Shalaya Foxx was turning her assigned room into a birthday party for a seemingly normal girl, with an oddly-colored birthday cake for the centerpiece.

Autumn Bolling, another Special Topics veteran, was planning her room, with the theme kept secret for opening night. Her dog Scamp will be part of the Forbidden Fairgrounds cast, playing Cujo the Hell Hound with a special set of devil horns.

“Be careful or he will trap you and lick you to death,” Bolling said.

“Forbidden Fairgrounds opens Friday, Oct. 8, with shows running Fridays and Saturdays through Oct. 23. The final run will be Thursday — Sunday, Oct. 28-31. Tickets are $15 per person, and sales begin at 7 p.m. each show night.