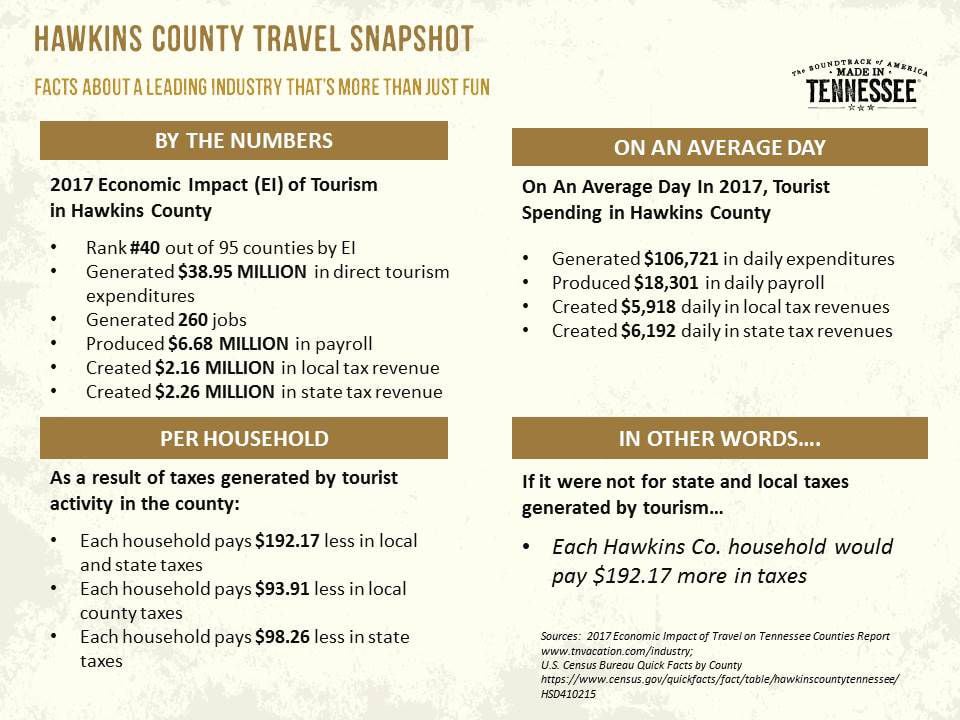 Hawkins County tourism statistics from the calendar year 2017, which is the latest data available. 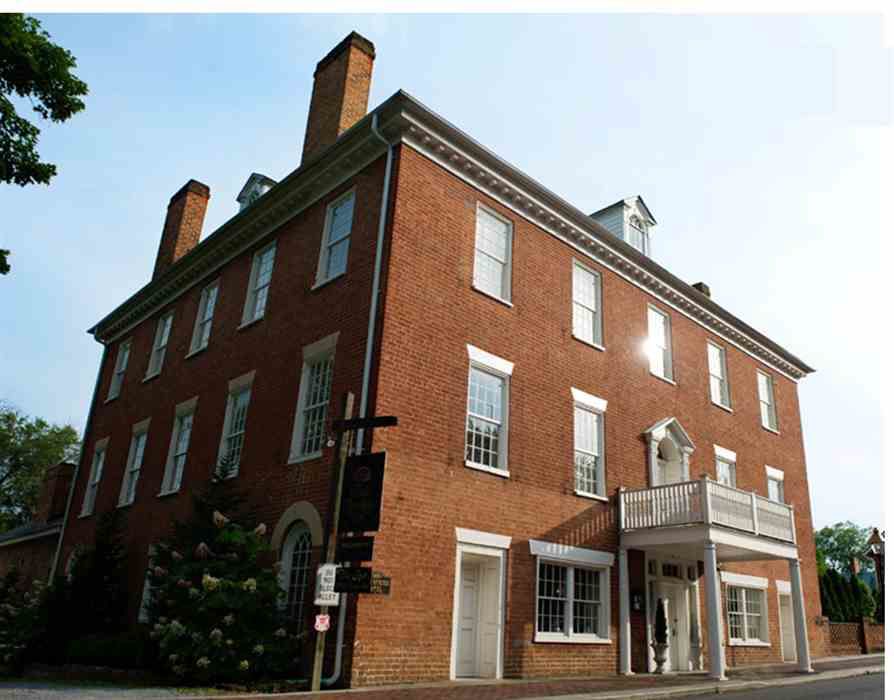 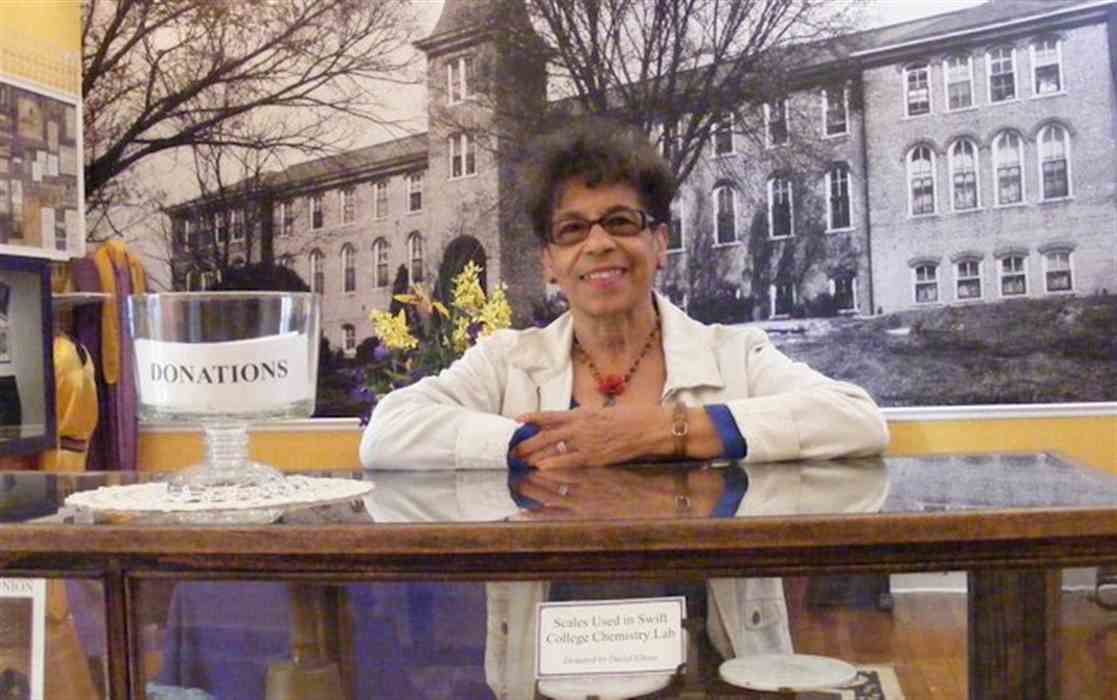 Curator and school alumnus Stella Gudger is shown at the Swift College Museum at the Price Public Community Center, near where the school college campus was located. In the background is the old college building which was demolished in the 1960s in Rogersville. 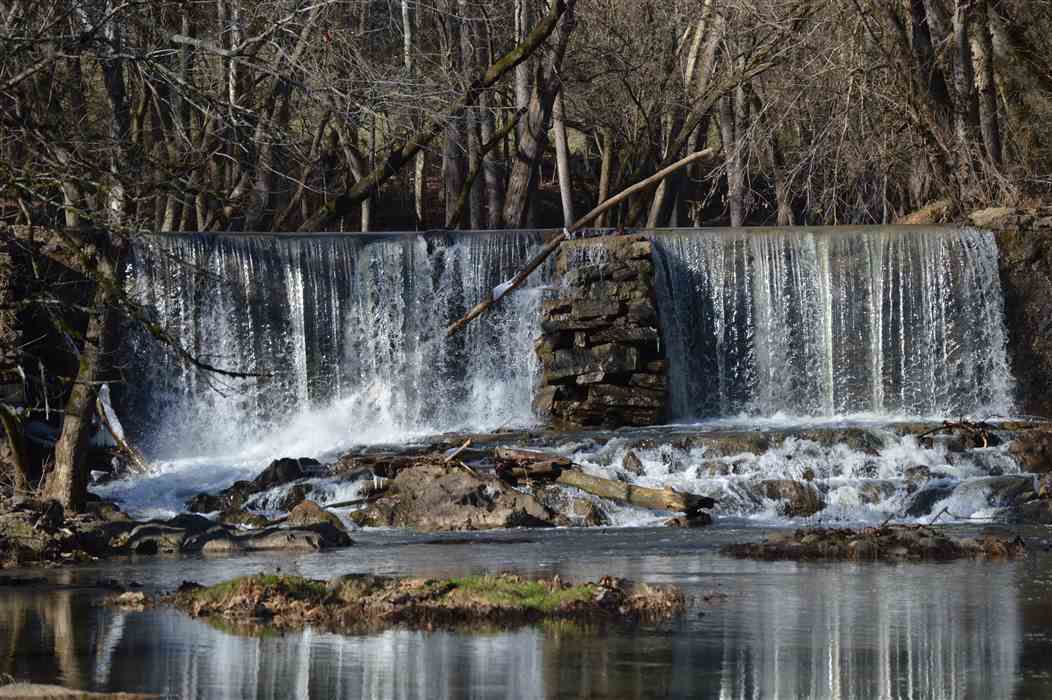 The Amis Mill Dam, which is the oldest stone dam in Tennessee, is located about two miles south of Rogersville on the Amis Mill Historic Site. 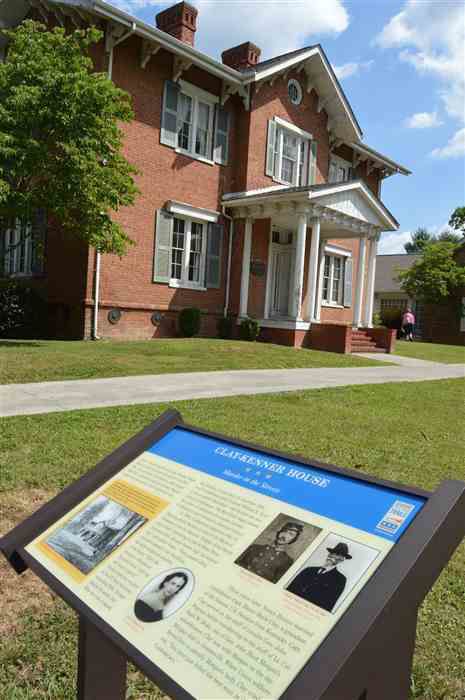 The Civil War Trails monument at the Kenner House in Rogersville. 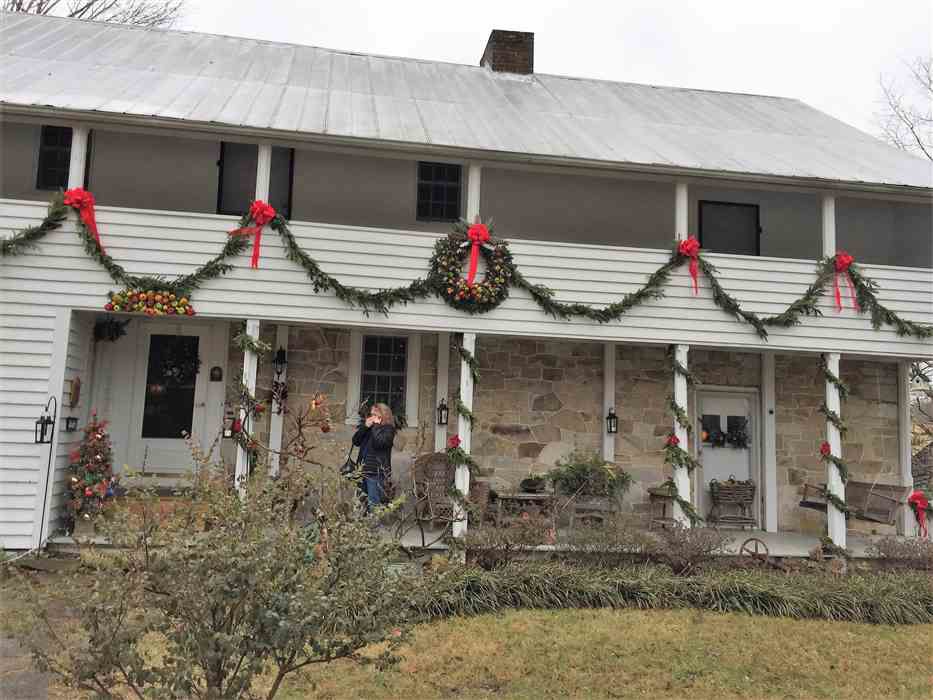 Amis House was built by Capt. Thomas Amis in 1781 about two miles south of Rogersville. The House is currently home to Amis Mill Historic Site owners Jake and Wendy Jacobs, but is opened to guided tours upon request.

Hawkins County tourism statistics from the calendar year 2017, which is the latest data available.

Curator and school alumnus Stella Gudger is shown at the Swift College Museum at the Price Public Community Center, near where the school college campus was located. In the background is the old college building which was demolished in the 1960s in Rogersville.

The Amis Mill Dam, which is the oldest stone dam in Tennessee, is located about two miles south of Rogersville on the Amis Mill Historic Site.

The Civil War Trails monument at the Kenner House in Rogersville.

Amis House was built by Capt. Thomas Amis in 1781 about two miles south of Rogersville. The House is currently home to Amis Mill Historic Site owners Jake and Wendy Jacobs, but is opened to guided tours upon request.

ROGERSVILLE — Retail business follows traffic, and tourism creates traffic, which is why many in Hawkins County’s government and business community are calling for an increased investment in county tourism.

According to the Tennessee Department of Tourism, in 2017, the total economic impact of Hawkins County tourism was $38.95 million, including $6.68 million in payroll, $2.26 million in state sales tax, and 2.16 million in local sales tax, supporting around 260 jobs.

Hawkins County doesn't have the traditional tourism attractions that big cities like Knoxville, Nashville and Memphis have to offer. Nor does it have a natural travel magnet like the Great Smoky Mountains, which puts Sevier County at the top of the state's tourism dollar generators.

But, Hawkins County does have rich, and well preserved historical attractions from two very important eras in American History: the expansion into the western frontier of the late 1700s and early 1800s; the Civil War.

There are interesting places to visit from one end of Hawkins County to the other, but the crown jewels are in the center of the county in and around Rogersville.

Located about two miles south of Rogersville at the intersection of Burem Road and Bear Hollow Road, the Amis Mill Historic Site dates back to 1780 and has historic significance to the westward expansion of the early United States, and well as the Civil War.

In 2016, the Big Creek Visitors Center opened across West Bear Hollow Road from the Amis Meal Eatery, and tells a story of America’s battle for independence in North Carolina 240 years ago and subsequent westward expansion.

It tells how one of the patriots who fought in the Revolutionary War — Capt. Thomas Amis — built a settlement at the end of the Old Stage Road and helped aid further westward expansion by supplying settlers, including some of America’s most famous founding fathers, with food, shelter, supplies and information.

The dam and the house, built in 1780 and 1781, are still standing, and the foundation and part of the mill wall can also still be seen near the dam.

The dam is the oldest stone dam still standing in Tennessee.

The Tennessee Civil War Trail program is part of a multi-state effort that identifies, interprets and creates driving tours of significant and lesser-known Civil War sites.

There are more than 400 trail markers, with at least one Civil War marker in each of the 95 counties, including four in Hawkins County.

Located a stone's throw from the Amis Mill dam and Big Creek Visitor's Center on West Bear Hollow Road, one monument tells the story of the Battle of Big Creek. It took place on and around the Amis property in 1863 when a Confederate force marched from Kingsport to Rogersville and surprised the Union occupiers of the town.

During that battle the Confederates captured food, weapons and hundreds of men while driving the fleeing Union forces to Morristown.

Other monuments were installed at the Surgoinsville Riverfront Park, the Kenner house in downtown Rogersville and the Hawkins County Courthouse.

The Surgoinsville monument mainly discusses the nearby Lyons Store and Post Office and the role that building played in the formation of Co. A of the 12th Tennessee Cavalry.

The Lyons Store is still standing, and although it isn’t open to the public, it can be seen by passing motorists on East Main Street just east of downtown. Surgoinsville’s monument also discusses the Battle of Big Creek.

The Kenner House monument talks about the man who owned the house during the Civil War. He formed a local Confederate unit, was suspected of leading raids against Union sympathizers, and was gunned down in 1862 on the street in front of the current day Masonic Lodge three blocks away.

The Hawkins County Courthouse monument is located on the west side of the 183-year-old building facing Depot Street. The marker discusses the county’s divided opinion on secession, the Union and Confederate occupations, and a local state delegate who surrendered to Union forces there and was imprisoned in Ohio.

Across Main Street from the Hale Springs Inn is the Kyle House, built in 1837, which is currently home to a popular coffee shop.

Legend has it that the historic Kyle House was used as Confederate headquarters during the Civil War because the front of the building faces south. Coincidentally, at a different time the Hale Springs Inn was used as headquarters for the Union Army during its occupation of Rogersville because it faced north.

Rogersville's first white settlers were Davy Crockett's grandparents, who were killed there by Native Americans shortly after their arrival in 1775.

Their property was then sold to Capt. Amis, and Amis' son-in-law Joseph Rogers later chartered the city of Rogersville, and opened Rogers Tavern beside Crockett Creek Park. Rogers and his wife are buried in the park beside Davy Crockett's grandparents.

A walking tour brochure is available at the Hale Springs Inn which tells the history and location of Rogersville's oldest buildings.

Hawkins County is also the birthplace of Tennessee printing and newspaper production. That story is well told by the Tennessee Newspaper and Printing Museum located in Rogersville in the old railroad station at the corner of Depot Street and Broadway Street.

A center of genealogy research

Founded in 2006, the Hawkins County Archive is a hub for county and regional genealogy research.

The archive, at 951 E. McKinney Ave., across from Rogersville Middle School, is almost literally busting at the seams with old documents and information that genealogy researchers describe as solid gold.

Today, the Hawkins County archive is among the biggest tourist attractions in Hawkins County, drawing people from throughout the country who have ancestral connections to the area for genealogy research.

After the archive opened, volunteers sorted through, copied and cataloged documents stored in the Hawkins County Courthouse basement dating back to 1787.

Other Hawkins County points of interest

* The Swift Memorial Museum, located in the Price Public School Community Center on Hasson Street in Rogersville, tells the story of Swift College which was was established in 1883 as an African American Junior College. The college operated until 1955, and continued on as a segregated high school until 1963.

* Laurel Run Park, located just south of Church Hill, was a major filming location for the Mel Gibson and Sissy Specek movie "The River." After production wrapped the producers donated the property to Hawkins County. On Halloween night of 1986 someone burned down the old farmhouse on the land.

* In 1977, the TVA began construction of a nuclear power plant at Phipps Bend near Surgoinsville. At its peak, there were 3,000 people working on the construction project, but in August 1981, the TVA announced that the $2.95 billion plant had been canceled, leaving behind the ruins of the concrete reactor and steel skeleton of the cooling tower (which are off limits to the public but can be safely seen from a distance).

* Pressmen’s Home, located on Route 94 about 10 miles north of Rogersville, was headquarters of the International Printing Pressmen and Assistants Union of North America from 1911–1967. It was a massive, amazing campus featuring a trade school, sanitarium, retirement home, hotel, post office,  chapel, hydroelectric power plant, ball fields, golf course and much more. Surviving structures are in ruins and are on private property with stern warnings posted to stay out; but you can see them from the road, which is all you'd want to do anyway because they look dangerous.

* Gilley's Hotel was built beside the railroad tracks in 1920 with four stories, more than 70 rooms, and during its existence it housed a doctor's office, barber shop, movie theater and formal dining room. Currently, it is in need of renovation.

* Country singer Archie Campbell, who performed on the Grand Ole Opry and TV show "Hee Haw," was born in downtown Bulls Gap in 1914, and his home still stands next door to a museum in his honor.

* Built in 1840, the New Canton Plantation is private property and not open to the public, but it can be seen from the road at 826 W. Main Blvd., Church Hill.

Archie Campbell’s grandson Chase Campbell wasn’t around when Archie was in his heyday, but he’s constantly getting to know his grandfather through the stories and the experiences of others.