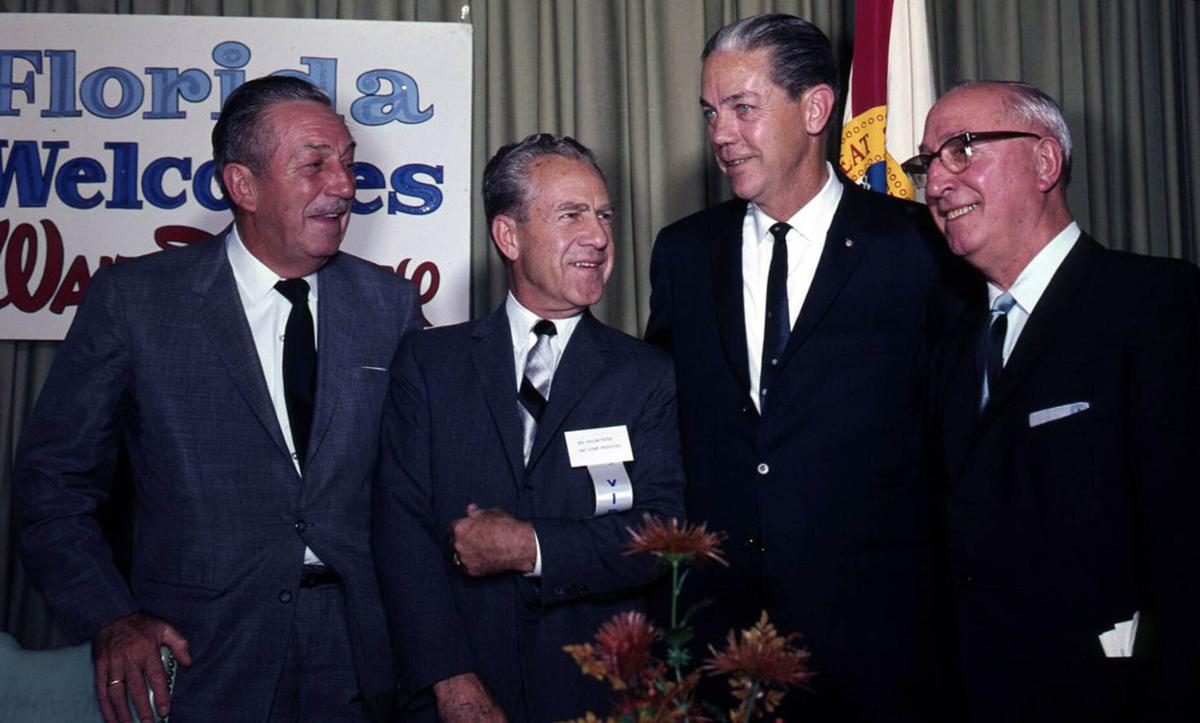 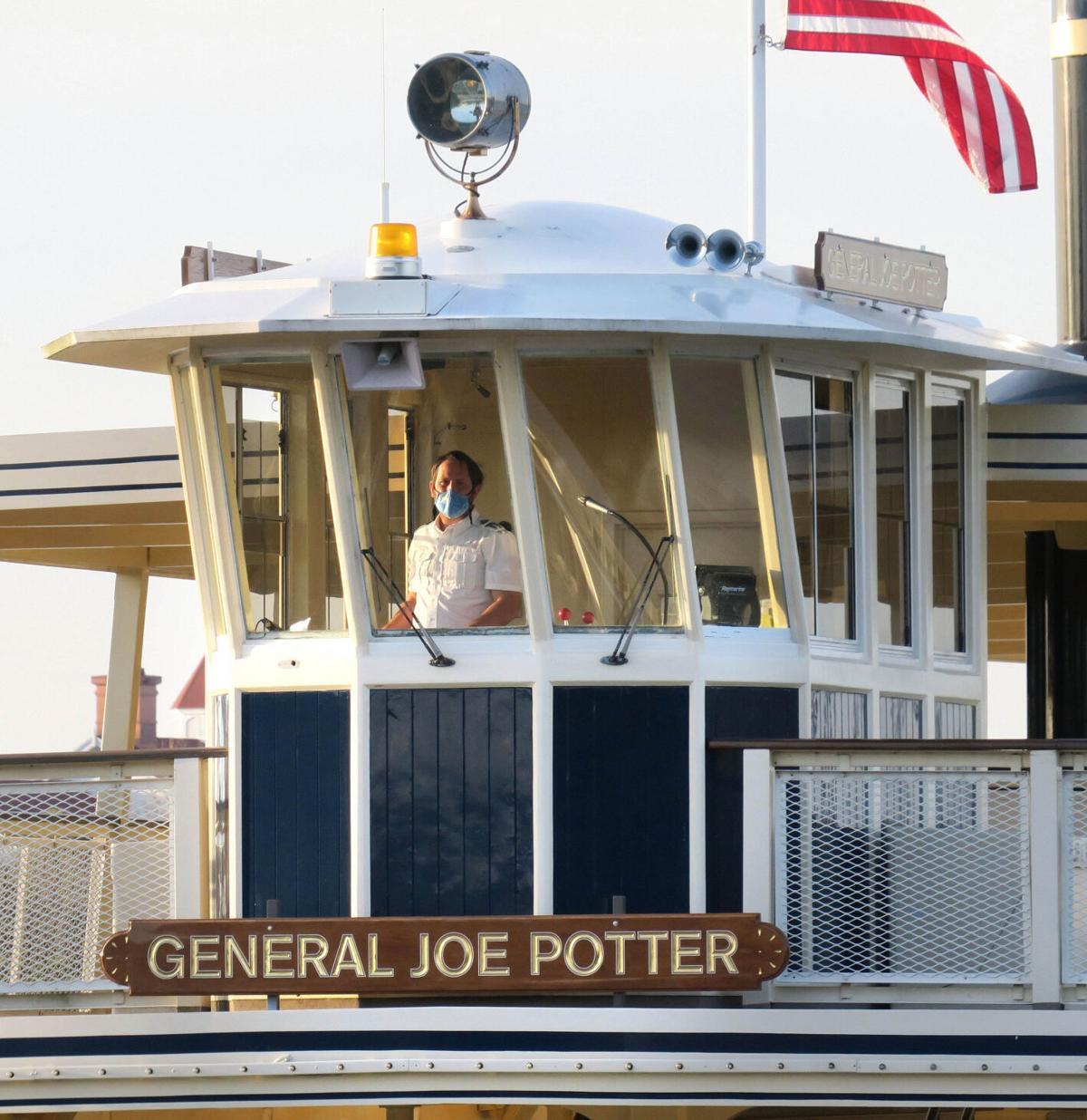 ORLANDO, Fla. — The tourists at Disney World are too preoccupied with the majestic Cinderella Castle ahead and the marching band playing “Let It Go” to notice the words in the second-floor window above the candy store.

“General Joe’s Building Permits, Licensed In Florida since ’66,” it says over the fake business on the Magic Kingdom’s Main Street USA.

“If you ask anybody that goes to Walt Disney World, who is Joe Potter? ... They won’t know much about him,” said Disney author and historian Christopher Lucas. “Without him, there’d be no Disney World.”

Missing Walt Disney’s star name recognition, Maj. Gen. William “Joe” Potter was the force that turned a swampy Florida wetland into the Magic Kingdom. Potter was the architect of Disney World’s government, the mastermind behind the hidden tunnel system at the park, and the reason why Disney has no mosquito problem today, Lucas said.

Potter died at age 83 in 1988 after remaining in Central Florida for the rest of his life during his post-Disney retirement, but the memories still run deep with his daughter and grandson, who live in Orlando today.

Potter’s daughter, Jo Ann Heine, tells stories of how Walt and the general, two good friends, made bets with each other to stop smoking and how Potter once shared a golf cart ride with Dolly Parton at Epcot’s grand opening.

Attorney Kent Hipp, the general’s grandson, displays a photograph of Walt Disney holding him as a baby in his downtown Orlando office. Hipp discovered a handwritten budget for the Magic Kingdom drawn up by the general when going through Potter’s belongings years after his death.

In his early 60s, the graying retired U.S. Army general led the massive construction project to get Disney’s land ready to build a theme park. The bulldozers tore through, uprooting trees, and crews tamed what was an alligator- and snake-infested swamp of Central Florida in the late 1960s.

This was an old Florida back then, more rugged, wild and so far away from the well- manicured Disney grounds known today. On a boat ride through the canal, Potter and his team brought a gun because snakes hung from the trees, his daughter recounted.

To make Disney World, something had to be done about Bay Lake.

The water was “a dark-brown color which would not be used for swimming because it would turn bleached blond hair brown and white swimming suits would be gray,” Potter recalled in his oral history recorded by the U.S. Corps of Engineers.

His men pumped out 5 million cubic yards of the sand, added well water and cleaned the lake’s bottom to turn it into a pristine lake.

Like a good military man, Potter had listened to his commander, Walt Disney. He complained how hard it was to maintain the fantasy in Disneyland when realities like garbage dumpsters or employee areas couldn’t be completely hidden away, Lucas said.

And to govern this new kingdom — or at least run its sewage system and utilities — Potter established the plan for Reedy Creek Improvement District.

By 1967, the state officially approved Reedy Creek as its own government, so Disney could have control of building roads, zoning code, and build a power plant, even its own airport if Disney desired one. Potter eventually served as the district’s first leader.

“We think today Disney is its own self-sufficient community, but that didn’t happen overnight, and it certainly didn’t happen by itself. Walt, again, had to sign off on all of this, but Joe Potter was the man that he trusted. He let him take care of all that,” said Lucas, author of the book “Top Disney.”

Along the way, there were political landmines that could implode at any time.

A few holdout landowners unwilling to sell. Labor strikes. Skeptical government officials. Orlando didn’t have a major airport as it was about to become a tourism hotspot. Again, it was Potter who went on the public relations offensive, negotiating and cajoling and earning himself the nickname “Mr. Disney” in Orlando as he became the liaison for the company.

The general had been responsible for high-stakes, high-profile projects throughout his entire career before Disney World.

First, in World War II, Potter oversaw sending mass numbers of men and supplies overseas for the invasion of northern France. And then at the Panama Canal, he served as governor in charge of business operations and the 40,000 people who lived there from 1956-1960.

In the 1960s, Potter’s next task was helping to build New York’s World’s Fair of 1964, putting him in direct contact with Walt Disney who debuted “It’s A Small World” and the Abraham Lincoln animatronic from the future Hall of Presi-dents.

In 1965, as the fair wound down, Walt Disney was quietly acquiring 28,000 acres for something big in Central Florida. He invited Potter to join him. Potter was on board.

“Daddy was always one for an adventure,” said his daughter, Heine, 83. “It was an opportunity of a lifetime. ... He loved every minute of it.”

Disney World hadn’t been officially announced yet, so his family kept his new job as a vice president for Walt Disney Productions a secret.

“He told us that he had been offered a position by Walt, but he said we can’t tell anybody,” Heine said.

On Potter’s early visit to Orlando, he checked into a Lake Eola hotel under a fake name so not to draw any attention to himself. He looked down to see what lay in front of him as he rode a helicopter to Disney’s property.

“I was one of the first people to put their feet on that 27,000 acres and was greatly impressed,” Potter said in his oral history.

Soon, the public caught wind that a mysterious landowner had acquired a small empire of land. An Orlando Sentinel “girl” reporter famously speculated it was Disney, which led to Walt’s “No comment” — “a very bad thing to say,” Potter recalled years later.

“So on Saturday morning ... I got up, came downstairs and the headline was, ‘We Say It’s Disney,’” Potter said. “And the secret was out.”

Walt Disney’s dream was not just to build Florida’s version of the Magic Kingdom but also Epcot, a city of the future.

Potter worked with him and the architect who designed Disneyland to develop a masterplan for Disney World. He also traveled to speak with industry leaders to get their support for Epcot.

The general called Walt Disney a genius, but his boss’s health was failing.

Potter visited him in the hospital in the final days and remembered Walt Disney lying in his bed pointing up at the hospital ceiling tiles as a blank canvas to explain his vision for Epcot, said Potter’s grandson.

After Walt Disney’s death in 1966, the Magic Kingdom’s plans forged ahead. Epcot would come later. Potter, who became the first Disney official to move to Florida in 1968, would have plenty to do.

Potter’s resume made him the right man for the job.

His inspiration to build the Magic Kingdom’s underground tunnels drew from the locks and dams in the Panama Canal and utilizing underground space at the World’s Fair, Lucas said.

“One of his things that he learned from the Panama Canal where people were dying of malaria was if you let water just sit there, you’re going to have a problem,” Lucas said. “He insisted to Walt, whatever we do, wherever there’s water, we got to make sure it’s either running off, moving or it’s just not sitting there or you’re going to have a lot of mosquitoes.”

Potter made sure that water was always in motion and engineered the buildings’ roofs at the Magic Kingdom so water never piled up.

Disney has slipped in tributes to Potter over the years.

Perhaps the most grand, Disney rechristened one of its three ferries the “General Joe Potter” in 1997. That same year, the Walt Disney Co. inducted Potter posthumously into its Disney Legends Hall of Fame.

And since the Magic Kingdom’s opening day, there has always been a General Joe’s Building Permits in the window on Main Street USA.

“It was always cool as a kid being able to look up at that window and see his name on that,” his grandson said. “Just like a little nod. If you’re in the know, you know what this is.”