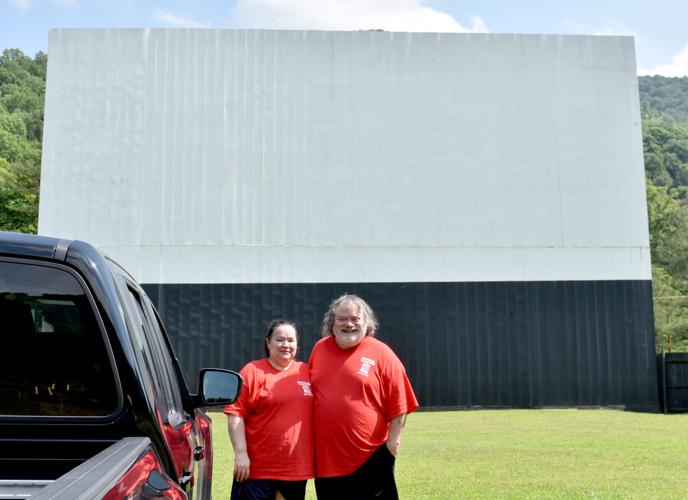 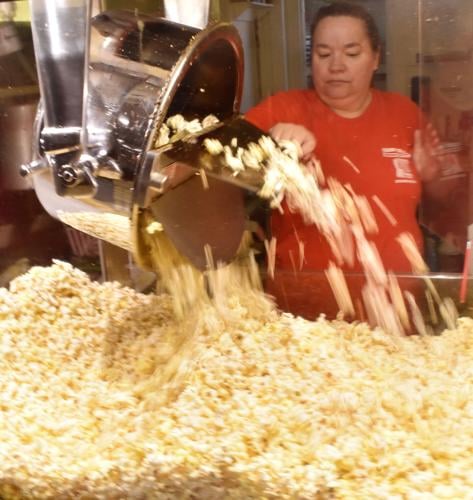 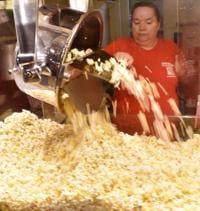 Paula Herron gets ready for Monday's round of moviegoers at the Central Drive-In with the first run of popcorn. 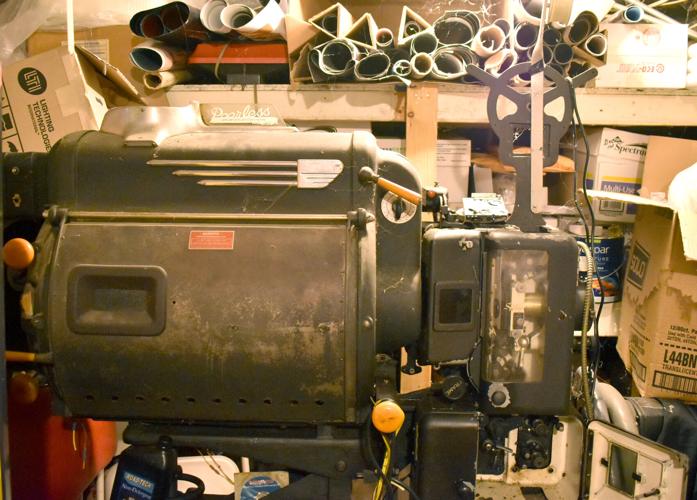 This 35 mm projector was how generations watched movies at the Central Drive-In until 2013, when the movie industry moved to digital projection. 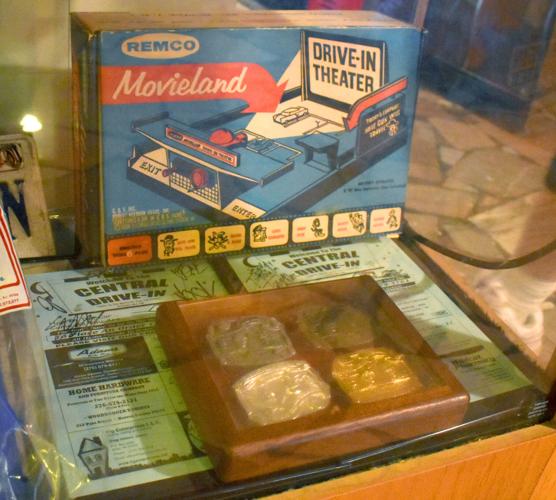 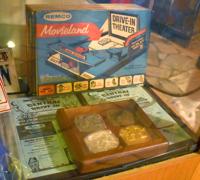 A cabinet in the Central Drive-In's concession stand gives customers a glimpse of the heyday of drive-ins, including a couple of menus autographed by musical performers and a 1960s toy drive-in.

Paula Herron gets ready for Monday's round of moviegoers at the Central Drive-In with the first run of popcorn.

This 35 mm projector was how generations watched movies at the Central Drive-In until 2013, when the movie industry moved to digital projection.

A cabinet in the Central Drive-In's concession stand gives customers a glimpse of the heyday of drive-ins, including a couple of menus autographed by musical performers and a 1960s toy drive-in.

BLACKWOOD — Summer may not arrive officially until June 21, but the Central Drive-In has been celebrating its 70th consecutive summer since May.

Buddy and Paula Herron are the second family to have owned and operated the Central since it opened in 1952, and they say that makes the staple of Wise County outdoor entertainment the oldest continually operating drive-in theater in Virginia.

“This was the prize,” Paula said of the Central, which she and Buddy bought as part of a 2005 agreement to take over the theater business that Jeff Kiser’s family had operated with the Central and the former Marty Cinema in Coeburn. “We knew we had something at the Drive-In that you don’t find everywhere.”

While the Herrons also moved the Coeburn theater to a former supermarket in Norton to open Cinema City in 2008, Paula said the Central has carried a magic that has lasted seven decades.

That magic is an experience that has brought people from across Southwest Virginia, East Tennessee and eastern Kentucky to sit in their cars to watch a double feature and grab a late dinner from the concession stand/projection room.

Posts that once held the metal speakers to hang on car windows remain as parking markers.

Families or couples could listen first to the sounds of “let’s go out to the lobby” before getting hungry for popcorn, soda, candy, corn dogs or Central Drive-In cheeseburgers — still on the paper menus that guests get as they pay at the gate.

In earlier times, the Central hosted musical performers as well as movies.

“Kitty Wells played here and so did Flatt and Scruggs,” Buddy said. “We’ve hosted performers like Toby Mack here too.”

Guests at the Central have been able to listen to the movies by radio for several years now, and disconnected cables are tied off at each post,

The Central even hosted Mountain Empire Community College’s 2020 commencement, as robed faculty and administration lined the gravel lanes to welcome graduates and families

Every seven nights, moviegoers can decide whether they want to watch a movie at Cinema City or see it around the same time at the Central. Many make the trip to Blackwood.

“Saturday was probably the best post-COVID crowd we’ve had,” Paula said. Buddy pulled up the numbers on his cell phone — 508 people came to watch “Jurassic World: Dominion” and a piece of 80s nostalgia, the Bigfoot comedy “Harry and the Hendersons.”

“We had a family that came three or four hours from Kentucky with their 2-year-old daughter to see “Harry” because they had seen it as kids,” said Paula. “We had some “Harry and the Hendersons” trading cards for sale, and they bought a pack to put in her treasure box for when she’s 18 and can remember seeing it.”

The Central has been the scene of movie events over the years — “Coal Miner’s Daughter” when it was released in 1980, “Big Stone Gap” eight years ago, and hundreds of other major and not-so-major movies.

Before the 2004 version of “Dawn of the Dead” with Sarah Polly and Ving Rhames, the Central in 1979 had the original version with zombies chasing people around a shopping mall. Even with the movie gore, guests still lined up at the concession stand.

The Central has weathered another technologic shift. In 2013, movie studios stopped distributing film prints in favor of digital formats. While a Texas Instruments digital projector now points from the projection booth, the Herrons still keep the original Peerless 35 mm projector in an adjacent storage room.

Buddy said he tries to stock items related to older movies they show at times, and in another week, he will try to do something similar when the Central shows “Jurassic World: Dominion” with a Marvel Comics Universe movie from more than three decades ago — “Howard the Duck.”

Buddy said Star Wars fans will find a connection with “Howard,” because it was one of George Lucas’ few treks outside a galaxy far, far away.

While the pandemic slowed or stopped many businesses in 2019, the Herrons credited then-Wise County Commonwealth’s Attorney Chuck Slemp III with helping them find a way to keep showing movies.

“Since people could watch movies from their cars, that worked for social distancing,” Buddy said. “In 2020, the state mandates changed so you could pick up food curbside, and our accountant Freddie Dean helped get a Wi-Fi tower installed so guests could place food orders and get notified when they were ready.”

By 2021, COVID restrictions were loosening enough so the Central could reopen its concession stand, but the pandemic caused a problem that still plagues the Central.

“We still can’t find apple sticks,” Buddy said of the battered and fried jelled apple dessert that had been on the Central’s menu for years.

“I get asked about them, specifically the apple sticks, 10 times a week,” Paula added.

The Central, like many businesses, also faces rising costs for concessions. Cooking oil and popcorn prices have climbed, Paula said, and soon popcorn will be served in plain brown paper bags. But the Central still tries to take care of its customers and the community.

“We do a canned food drive each year and we’ve done a fundraiser for animal rescue,” Paula said.

“And that’s come back to us,” Buddy said of community support for the Central. “Sykes did a fundraiser for us when we thought we were going to shut down and that raised enough to pay a month’s power bill. That really helped us.”

Folks still line up at the Central’s box office 70 years later, and Buddy said that attraction comes in spite of cable, streaming services and pay-per-view.

“There’s something about being in a theater or at the drive-in and having this big screen in front of you,” said Buddy, “and you just don’t get that sitting in your living room.”