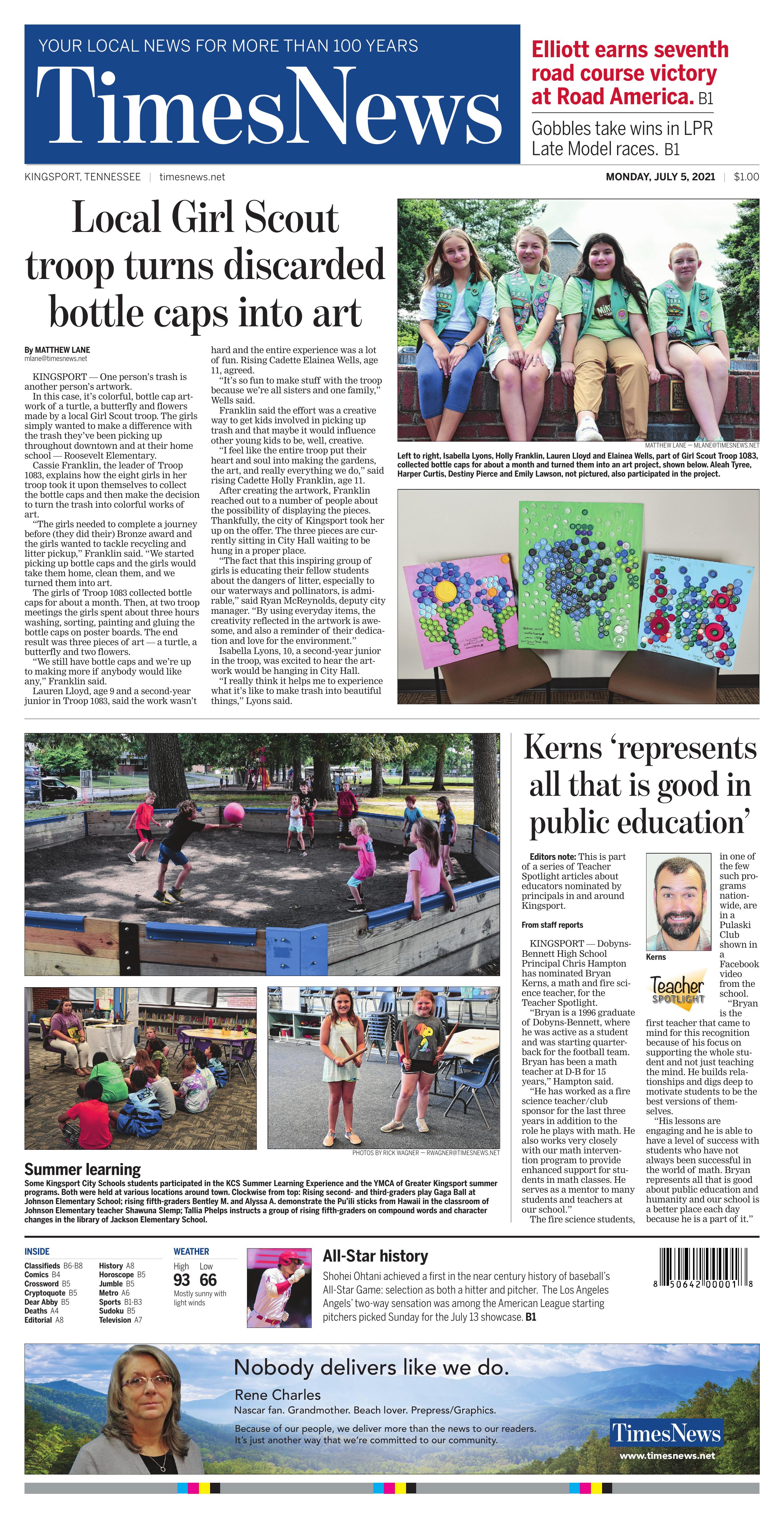 Left to right, Isabella Lyons, Holly Franklin, Lauren Lloyd and Elainea Wells, part of Girl Scout Troop 1083, collected bottle caps for about a month and turned them into an art project, shown below. Aleah Tyree, Harper Curtis, Destiny Pierce and Emily Lawson, not pictured, also participated in the project.

KINGSPORT — One person’s trash is another person’s artwork.

In this case, it’s colorful, bottle cap artwork of a turtle, a butterfly and flowers made by a local Girl Scout troop. The girls simply wanted to make a difference with the trash they’ve been picking up throughout downtown and at their home school — Roosevelt Elementary.

Cassie Franklin, the leader of Troop 1083, explains how the eight girls in her troop took it upon themselves to collect the bottle caps and then make the decision to turn the trash into colorful works of art.

“The girls needed to complete a journey before (they did their) Bronze award and the girls wanted to tackle recycling and litter pickup,” Franklin said. “We started picking up bottle caps and the girls would take them home, clean them, and we turned them into art.

The girls of Troop 1083 collected bottle caps for about a month. Then, at two troop meetings the girls spent about three hours washing, sorting, painting and gluing the bottle caps on poster boards. The end result was three pieces of art — a turtle, a butterfly and two flowers. 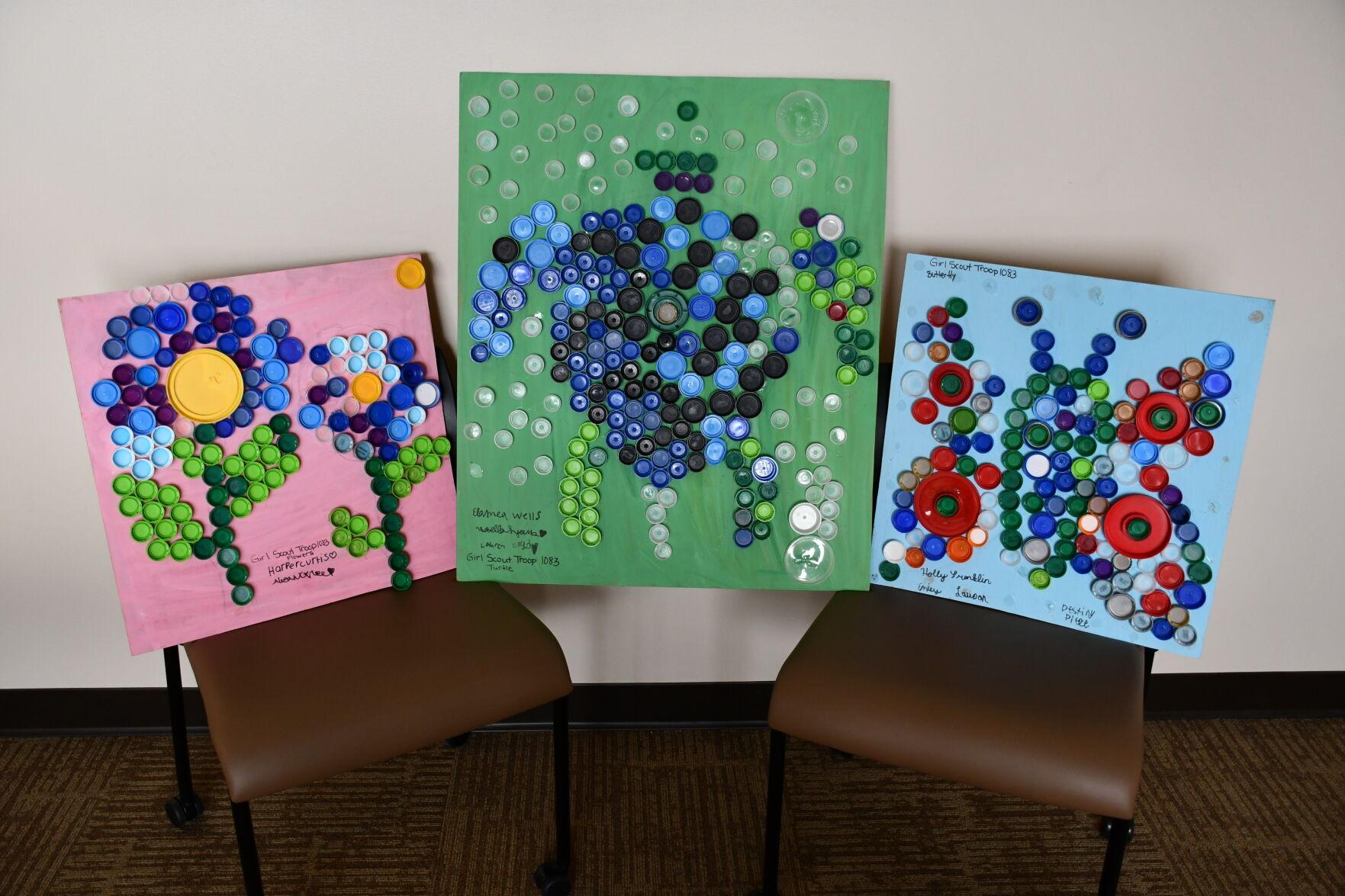 The three pieces of art will hang in the new city hall.

“We still have bottle caps and we’re up to making more if anybody would like any,” Franklin said.

Lauren Lloyd, age 9 and a second-year junior in Troop 1083, said the work wasn’t hard and the entire experience was a lot of fun. Rising Cadette Elainea Wells, age 11, agreed.

“It’s so fun to make stuff with the troop because we’re all sisters and one family,” Wells said.

Franklin said the effort was a creative way to get kids involved in picking up trash and that maybe it would influence other young kids to be, well, creative.

“I feel like the entire troop put their heart and soul into making the gardens, the art, and really everything we do,” said rising Cadette Holly Franklin, age 11. 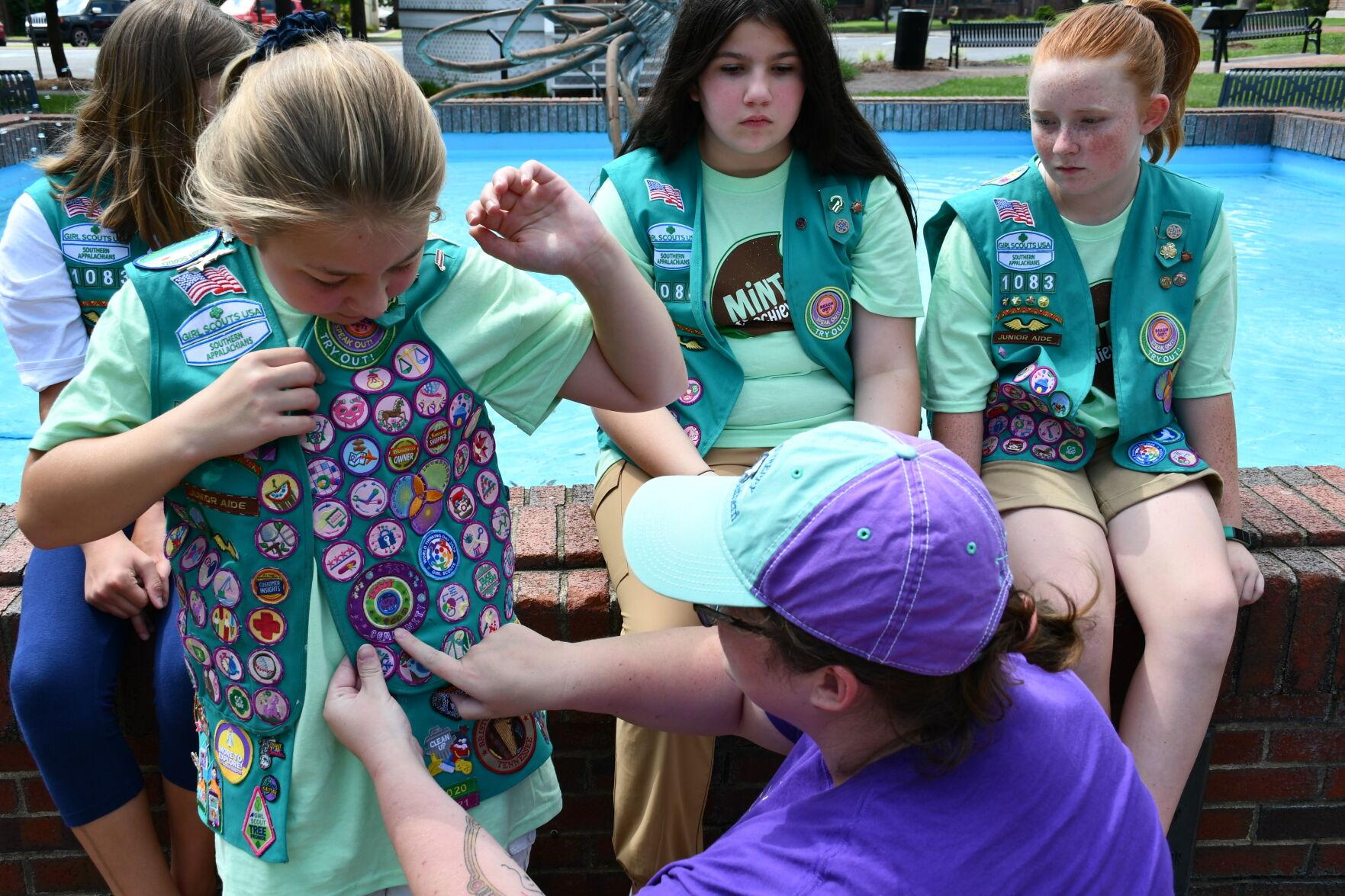 Cassie Franklin, the leader of Troop 1083, points to the merit badge the girls received for doing the artwork project.

After creating the artwork, Franklin reached out to a number of people about the possibility of displaying the pieces. Thankfully, the city of Kingsport took her up on the offer. The three pieces are currently sitting in City Hall waiting to be hung in a proper place.

“The fact that this inspiring group of girls is educating their fellow students about the dangers of litter, especially to our waterways and pollinators, is admirable,” said Ryan McReynolds, deputy city manager. “By using everyday items, the creativity reflected in the artwork is awesome, and also a reminder of their dedication and love for the environment.”

Isabella Lyons, 10, a second-year junior in the troop, was excited to hear the artwork would be hanging in City Hall.

“I really think it helps me to experience what it’s like to make trash into beautiful things,” Lyons said.

A student at Jackson Elementary Schools Summer Learning Experience works Tuesday afternoon cutting paper with words printed on it to learn about compound words. The class of rising fifth graders was in the library.

Teacher Tallia Phelps instructs a group of rising fifth graders on compound words and character changes Tuesday in the library of Jackson Elementary School. It is part of the Kingsport City School's Summer Learning Experience, also known as summer school, which ended Thurdsay.

A Kingsport elementary school student take a respite from the heat Tuesday as rising second and third grade classmates behind him play Gaga Ball in a pit at Johnson Elementary School. The students are in the summer YMCA program at the school.

Some Kingsport City Schools students participated in the KCS Summer Learning Experience and the YMCA of Greater Kingsport summer programs. Both were held at various locations around town. Clockwise from top: Rising second- and third-graders play Gaga Ball at Johnson Elementary School; rising fifth-graders Bentley M. and Alyssa A. demonstrate the Pu’ili sticks from Hawaii in the classroom of Johnson Elementary teacher Shawuna Slemp; Tallia Phelps instructs a group of rising fifth-graders on compound words and character changes in the library of Jackson Elementary School.

“Bryan is a 1996 graduate of Dobyns-Bennett, where he was active as a student and was starting quarterback for the football team. Bryan has been a math teacher at D-B for 15 years,” Hampton said.

“He has worked as a fire science teacher/club sponsor for the last three years in addition to the role he plays with math. He also works very closely with our math intervention program to provide enhanced support for students in math classes. He serves as a mentor to many students and teachers at our school.”

The fire science students, in one of the few such programs nationwide, are in a Pulaski Club shown in a Facebook video from the school.

“Bryan is the first teacher that came to mind for this recognition because of his focus on supporting the whole student and not just teaching the mind. He builds relationships and digs deep to motivate students to be the best versions of themselves.

“His lessons are engaging and he is able to have a level of success with students who have not always been successful in the world of math. Bryan represents all that is good about public education and humanity and our school is a better place each day because he is a part of it.” 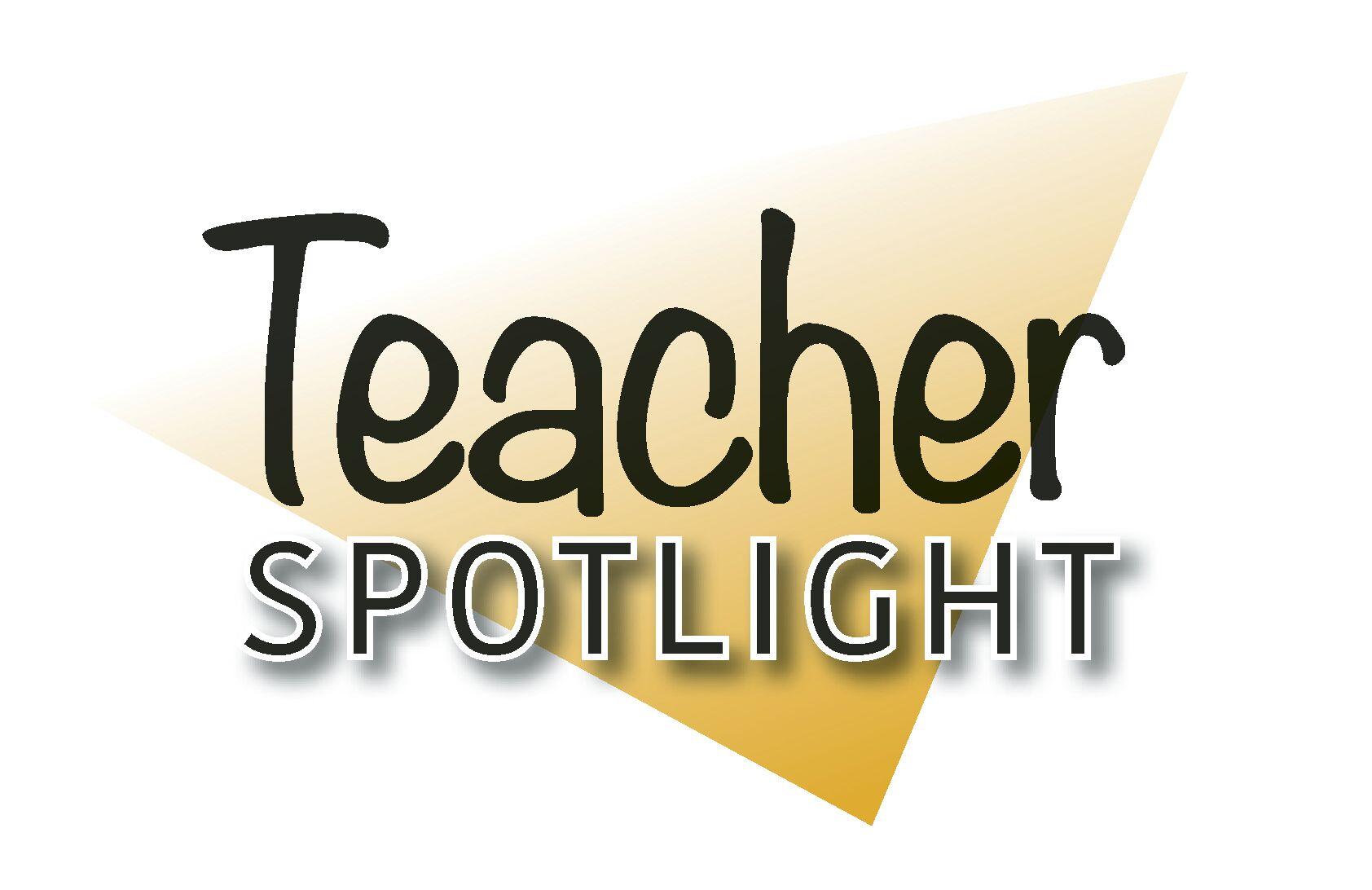 Los Angeles Angels designated hitter Shohei Ohtani rounds the bases after hitting a home run against the Baltimore Orioles on Sunday in Anaheim, Calif. The homer was Ohtani’s 31st of the season.