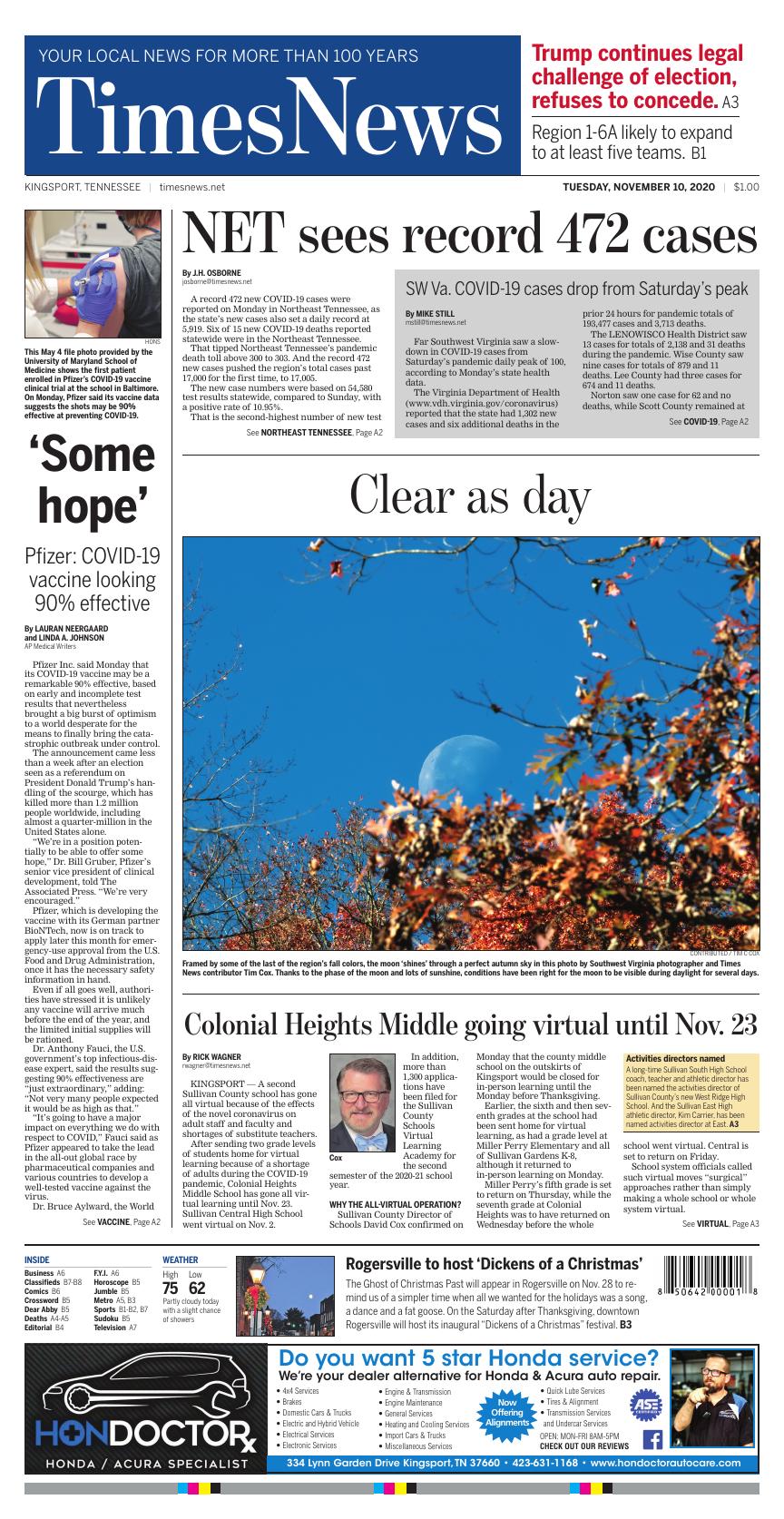 Another milestone: Carter County reached 2,000 total cases.The new case numbers were based on 54,580 test results statewide, compared to Sunday, with a positive rate of 10.95%.

On social media, the Tennessee Department of Health indicated the spike in new cases was due to “a combination of backlog and high percent positivity rate.”

The “backlog” was caused by an upgrade to the department’s reporting system last week, according to another post on a TDH social media account.

New deaths in the region, by county: one in Sullivan; one in Carter; two in Unicoi; one in Johnson; and one in Greene.

According to Ballad Health’s daily COVID-19 scorecard on Monday: Over the past week the positive rate in the system’s 21-county service area is 15.9% and 63 COVID-19 deaths have occurred. As of Monday, 213 COVID-19 patients were hospitalized in Ballad facilities, with 41 in ICU and 27 on ventilators. Ballad’s scorecard indicated that as of Monday, since March 1 there have been 27,576 cases of COVID-19 and 505 COVID-19 deaths in its coverage area.

KINGSPORT — A second Sullivan County school has gone all virtual because of the effects of the novel coronavirus on adult staff and faculty and shortages of substitute teachers.

After sending two grade levels of students home for virtual learning because of a shortage of adults during the COVID-19 pandemic, Colonial Heights Middle School has gone all virtual learning until Nov. 23. Sullivan Central High School went virtual on Nov. 2.

In addition, more than 1,300 applications have been filed for the Sullivan County Schools Virtual Learning Academy for the second semester of the 2020-21 school year.

WHY THE ALL-VIRTUAL OPERATION?

Sullivan County Director of Schools David Cox confirmed on Monday that the county middle school on the outskirts of Kingsport would be closed for in-person learning until the Monday before Thanksgiving.

Earlier, the sixth and then seventh grades at the school had been sent home for virtual learning, as had a grade level at Miller Perry Elementary and all of Sullivan Gardens K-8, although it returned to in-person learning on Monday.

In addition, all Sullivan County students are virtual on Wednesdays.

As school officials said at a recent school board work session and then a meeting, the virtual school and grade level decisions are because not enough adults, either teachers, administrators or substitutes, are available to teach students in-person and not enough other adults are available to proctor students in classes where quarantined teachers are at home.

“It’s primarily because we don’t have enough adults to handle the classes even if teachers are quarantined and teaching at home,” county school board Chairman Randall Jones said on Monday. “Right now, there’s a greater need for subs.”

Jones, a former teacher and one-time assistant superintendent in Bristol, Tennessee, said that all school systems are scrambling for substitutes and had a shortage before the coronavirus hit.

Cox said the sub shortage is “critical” and that the school system has experienced an unprecedented number of mid-school-year retirements.

Four teachers retired recently, bringing to 19 the total for the 2020-21 school year.

In addition, the system is short 14 contract bus driver positions.

HOW MANY STUDENTS WANT TO BE VIRTUAL NEXT SEMESTER?

Also, applications have been filed for 1,344 students, out of more than 8,800 students systemwide, to be virtual during the second semester of the 2020-21 school year starting in January.

Midnight on Sunday was the deadline for applications. Cox said that applications will be reviewed and that only students who had satisfactory academic performance and attendance will be allowed to be virtual instead of face to face.

Kingsport is in hybrid mode, with students in two staggered groups attending in-person two days a school week and virtual the other three.

Neighboring Hawkins County Schools have in-person learning except for virtual Fridays. All have options for students to remain all virtual.

The Virginia Department of Health (www.vdh.virginia.gov/coronavirus) reported that the state had 1,302 new cases and six additional deaths in the prior 24 hours for pandemic totals of 193,477 cases and 3,713 deaths.

Norton saw one case for 62 and no deaths, while Scott County remained at 523 cases and nine deaths.

Red Onion State Prison remained at 20 inmate cases and one active staff/contractor case, according to the Virginia Department of Corrections COVID-19 webpage (https://vadoc.virginia.gov/news-press-releases/2020/covid-19-updates/).

The seven-day average rate of positive PCR test results in the LENOWISCO district in Monday’s report dropped from 14.2% to 13.9%. The statewide positivity rate rose from 6% to 6.1%.

Pfizer Inc. said Monday that its COVID-19 vaccine may be a remarkable 90% effective, based on early and incomplete test results that nevertheless brought a big burst of optimism to a world desperate for the means to finally bring the catastrophic outbreak under control.

The announcement came less than a week after an election seen as a referendum on President Donald Trump’s handling of the scourge, which has killed more than 1.2 million people worldwide, including almost a quarter-million in the United States alone.

Pfizer, which is developing the vaccine with its German partner BioNTech, now is on track to apply later this month for emergency-use approval from the U.S. Food and Drug Administration, once it has the necessary safety information in hand.

Even if all goes well, authorities have stressed it is unlikely any vaccine will arrive much before the end of the year, and the limited initial supplies will be rationed.

Dr. Anthony Fauci, the U.S. government’s top infectious-disease expert, said the results suggesting 90% effectiveness are “just extraordinary,” adding: “Not very many people expected it would be as high as that.”

“It’s going to have a major impact on everything we do with respect to COVID,” Fauci said as Pfizer appeared to take the lead in the all-out global race by pharmaceutical companies and various countries to develop a well-tested vaccine against the virus.

Global markets, already buoyed by the victory of President-elect Joe Biden, rallied on the news from Pfizer. The S&P 500 finished the day with a gain of 1.2%, while the Dow Jones Industrial Average rose more than 800 points. Pfizer stock was up more than 8%.

Still, Monday’s announcement doesn’t mean for certain that a vaccine is imminent: This interim analysis, from an independent data monitoring board, looked at 94 infections recorded so far in a study that has enrolled nearly 44,000 people in the U.S. and five other countries.

Some participants got the vaccine, while others got dummy shots. Pfizer released no specific breakdowns, but for the vaccine to be 90% effective, nearly all the infections must have occurred in placebo recipients. The study is continuing, and Pfizer cautioned that the protection rate might change as more COVID-19 cases are added to the calculations.

Dr. Jesse Goodman of Georgetown University, former chief of the FDA’s vaccine division, called the partial results “extremely promising” but ticked off many questions still to be answered, including how long the vaccine’s effects last and whether it protects older people as well as younger ones.

Trump, who had suggested repeatedly during the presidential campaign that a vaccine could be ready by Election Day, tweeted: “STOCK MARKET UP BIG, VACCINE COMING SOON. REPORT 90% EFFECTIVE. SUCH GREAT NEWS!”

Biden, for his part, welcomed the news but cautioned that it could be many months before vaccinations become widespread in the U.S., and he warned Americans to rely on masks and social distancing in the meantime. He said the country still faces a “dark winter.”

Confirmed infections in the U.S. eclipsed 10 million on Monday, the highest in the world. New cases are running at all-time highs of more than 100,000 per day. And tens of thousands more deaths are feared in the coming months, with the onset of cold weather and the holidays.

Pfizer’s vaccine is among four candidates already in huge studies in the U.S., with still more being tested in other countries. Another U.S. company, Moderna Inc., also hopes to file an application with the FDA late this month.

Both companies’ shots are made with a brand-new technology. These “mRNA vaccines” aren’t made with the coronavirus itself, meaning there’s no chance anyone could catch it from the shots. Instead, the vaccine contains a piece of genetic code that trains the immune system to recognize the spiked protein on the surface of the virus.

The timing of Pfizer’s announcement is likely to feed unsubstantiated suspicions from Trump supporters that the pharmaceutical industry was withholding the news until after the election. Donald Trump Jr. tweeted: “The timing of this is pretty amazing. Nothing nefarious about the timing of this at all right?”

Pfizer has insisted that its work is not influenced by politics and that it was “moving at the speed of science.” Its independent data monitors met on Sunday, analyzing the COVID-19 test results so far and notifying Pfizer.

Pfizer initially opted not to join the Trump administration’s Operation Warp Speed, which helped fund a half-dozen vaccine makers’ research and manufacturing scale-up. Pfizer instead said it has invested $2 billion of its own money in testing and expanding manufacturing capacity. But in July, Pfizer signed a contract to supply the U.S. with 100 million doses for $1.95 billion, assuming the vaccine is cleared by the FDA.

Pfizer said its only involvement in Operation Warp Speed is that those doses are part of the administration’s goal to have 300 million doses of COVID-19 vaccines ready sometime next year.

The strong results were a surprise. Scientists have warned for months that any COVID-19 shot may be only as good as flu vaccines, which are about 50% effective and require yearly immunizations. Earlier this year, Fauci said he would be happy with a COVID-19 vaccine that was 60% effective.

Whatever the ultimate level of protection, no one knows if people will need regular vaccinations.

Also, volunteers in the study received a coronavirus test only if they developed symptoms, leaving unanswered whether vaccinated people could get infected but show no symptoms and unknowingly spread the virus.

Pfizer has estimated it could have 50 million doses available globally by the end of 2020, enough for 25 million people.

Public Citizen, the consumer advocacy group, called the release of the preliminary and incomplete data “bad science” and said that any enthusiasm over the results “must be tempered” until they are reviewed by the FDA and its independent experts.

“Crucial information absent from the companies’ announcement is any evidence that the vaccine prevents serious COVID-19 cases or reduces hospitalizations and deaths due to the disease,” the organization said. 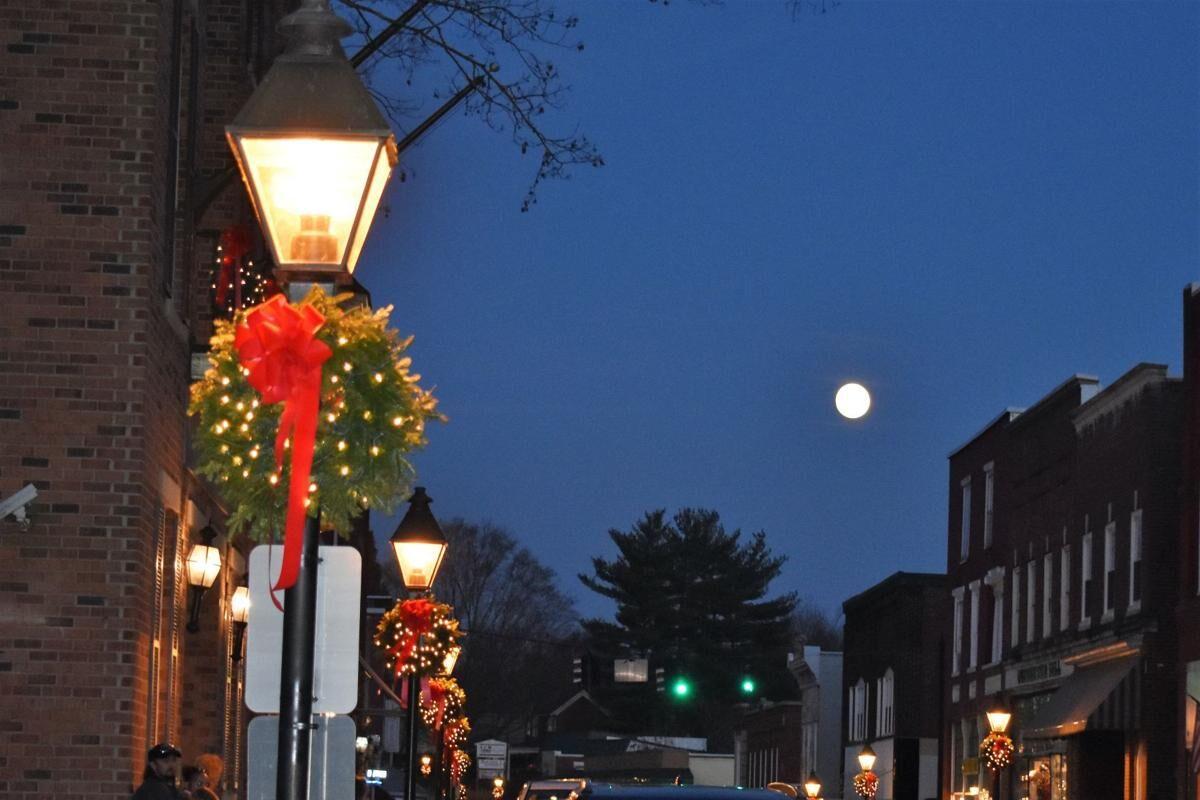 This file photo shows downtown Rogersville decorated for Christmas. On Nov. 28, Rogersville will host its first ever ‘Dickens of a Christmas’ festival. 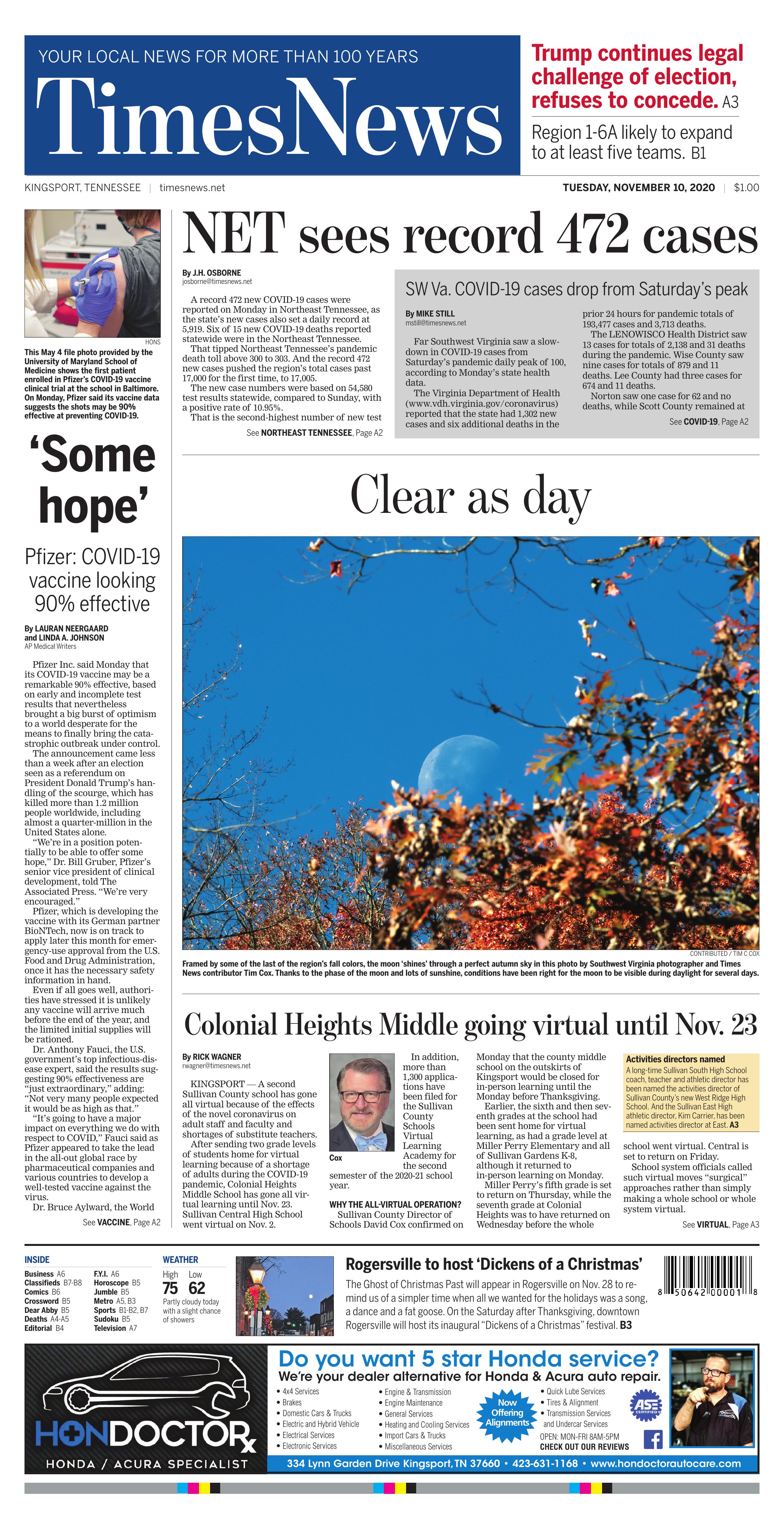