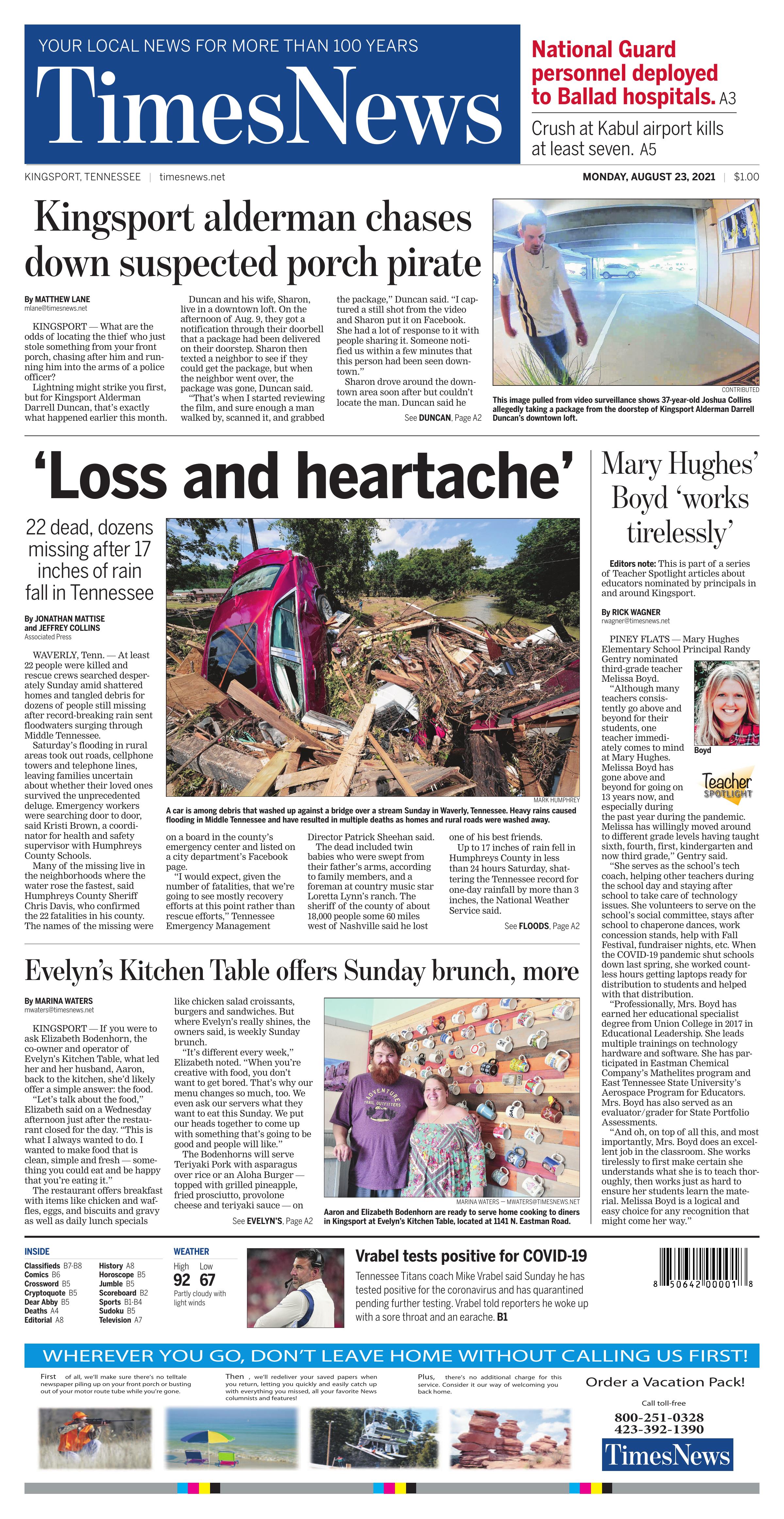 KINGSPORT — What are the odds of locating the thief who just stole something from your front porch, chasing after him and running him into the arms of a police officer?

Lightning might strike you first, but for Kingsport Alderman Darrell Duncan, that’s exactly what happened earlier this month.

Duncan and his wife, Sharon, live in a downtown loft. On the afternoon of Aug. 9, they got a notification through their doorbell that a package had been delivered on their doorstep. Sharon then texted a neighbor to see if they could get the package, but when the neighbor went over, the package was gone, Duncan said.

“That’s when I started reviewing the film, and sure enough a man walked by, scanned it, and grabbed the package,” Duncan said. “I captured a still shot from the video and Sharon put it on Facebook. She had a lot of response to it with people sharing it. Someone notified us within a few minutes that this person had been seen downtown.”

Sharon drove around the downtown area soon after but couldn’t locate the man. Duncan said he was driving down Center Street a couple of hours later and spotted the suspect walking down the sidewalk. After making a quick U-turn, Duncan parked near the Justice Center, got Central Dispatch on the phone, and walked toward the man.

“As I get close to him, he said, ‘I didn’t do anything,’ and then he ran. I chased after him a block or two, up Broad toward Market Street and then down an alley towards Commerce,” Duncan said. “There was an officer in the parking lot near Market and he ran right straight into (him), who took him down pretty quick.”

The suspect was 37-year-old Joshua Collins, according to the incident report from the Kingsport Police Department. At first, Collins denied taking the package, but after Duncan showed him the video his security system captured, Collins allegedly admitted to the theft.

Collins reportedly said he put the package in his red Toyota Camry that was parked on Broad Street. The package contained a blue dress shirt. Police charged Collins with theft of property less than $1,000.

“It was sheer luck, really. I didn’t have lot of faith we would see him,” Duncan said. “But just as I was thinking that, he kind of appeared and had not changed clothes.”

Tom Patton, KPD public information officer, said porch pirates typically strike during the holiday season, but noted the department has been seeing an increase in such crimes recently.

It could be that the incidents are happening more often or that the public is just being more diligent in reporting them, Patton said.

“The best way to prevent it from happening to you is to avoid leaving unattended packages outside of your residence, especially for extended periods of time,” Patton said. “Also, consider installing home video surveillance cameras that monitor the drop-off location, and prominently display signs announcing their presence as a deterring effect. While cameras are not guaranteed to prevent this crime from happening, they greatly increase the chances of identifying the culprit.”

The Duncans have lived in their downtown loft for nearly three years, and this was the first time one of their packages has been stolen. The couple’s security system definitely made a difference.

“I would refrain from doing what I did and running after somebody,” Duncan said, noting it was a “heat of the moment” type of decision. “I was just trying to detain him long enough until the officers showed up.”

Aaron and Elizabeth Bodenhorn are ready to serve home cooking to diners in Kingsport at Evelyn’s Kitchen Table, located at 1141 N. Eastman Road.

Owner Elizabeth Bodenhorn looks through the mugs on display at Evelyn's Kitchen Table in the Green Acres Shopping Center on Eastman Road in Kingsport. Her favorite, the Richard Simmons mug, is also among the selection of 50 coffee mugs at the restaurant.

Photos by Elizabeth Bodenhorn's father, Rick Currie, are on display at the restaurant.

Photos from Kingsport adorn the wall at Evelyn's.

KINGSPORT — If you were to ask Elizabeth Bodenhorn, the co-owner and operator of Evelyn’s Kitchen Table, what led her and her husband, Aaron, back to the kitchen, she’d likely offer a simple answer: the food.

“Let’s talk about the food,” Elizabeth said on a Wednesday afternoon just after the restaurant closed for the day. “This is what I always wanted to do. I wanted to make food that is clean, simple and fresh — something you could eat and be happy that you’re eating it.”

The restaurant offers breakfast with items like chicken and waffles, eggs, and biscuits and gravy as well as daily lunch specials like chicken salad croissants, burgers and sandwiches. But where Evelyn’s really shines, the owners said, is weekly Sunday brunch.

“It’s different every week,” Elizabeth noted. “When you’re creative with food, you don’t want to get bored. That’s why our menu changes so much, too. We even ask our servers what they want to eat this Sunday. We put our heads together to come up with something that’s going to be good and people will like.”

The Bodenhorns will serve Teriyaki Pork with asparagus over rice or an Aloha Burger — topped with grilled pineapple, fried prosciutto, provolone cheese and teriyaki sauce — on any given Sunday. The restaurant’s Banana Fosters French Toast has also been a hit after its Sunday brunch debut.

“We had Banana Fosters French Toast on Sunday. We had someone call today asking for it,” Elizabeth laughed. “I was like, ‘We’ve got bananas. You’re in luck!’ ”

Though the Bodenhorns believe it’s the food that makes Evelyn’s the restaurant it is, it could also have a bit to do with experience.

The couple have spent years in the kitchen, working at various restaurants including The Chop House in Sevierville.

“I cooked in a lot of different places,” Aaron, who is originally from Tampa, Florida, said. “I paid attention well, I guess.”

Elizabeth also attended culinary school before she and her husband decided to open their own restaurant, named after their 16 year-old daughter, Evelyn.

But according to Elizabeth, classroom instruction isn’t everything.

“That’s not where you learn how to cook,” she said, referring to culinary school. “You learn how to cook on the grind. The Chophouse in Sevierville was insane busy. So you learn that grind, that day to day. Then you cook at home a lot too. That’s where you perfect your seasoning craft, cooking at home and cooking for other people.”

That’s exactly what she’s hoping for. However, the pandemic has challenged the cooking duo. Evelyn’s Kitchen Table opened last August. While they see their regulars coming through the doors for homemade grits and chicken and waffles, the owners are hoping to see more folks ready to try their made-from-scratch meals.

The Evelyn’s team aims to offer locally grown foods as much as possible. Elizabeth’s father, Rick, usually rounds up farmers market tomatoes for the restaurant while the bacon comes from Kentucky.

“I wish we could get more local,” Elizabeth said. “The hope is that eventually we can have 10 people three times a week lined up out back dropping stuff off.”

The goal is also to provide whole foods that took time to prepare rather than processed, fast food, she said.

“Non-processed food, that’s what we want,” she said. “We make everything that we possibly can. There’s no microwave in here. We’re working off of a six-burner stove with a flat top, two ovens and a small home stove. There is nothing instant in this place.”

It’s all worth it, though, the couple agree, when that magical moment happens when the food reaches the table.

“When we set down a plate in front of someone and they go, ‘Ohhh,’ ” then they eat it and their eyes just get huge like, ‘Ah man, this is good!’ ”

“We care about the food that we want people to eat,” Elizabeth said. “We truly do care about it. We want it to be good food.”

For more information, go to https://www.evelynskitchentable.com/.

“Although many teachers consistently go above and beyond for their students, one teacher immediately comes to mind at Mary Hughes. Melissa Boyd has gone above and beyond for going on 13 years now, and especially during the past year during the pandemic. Melissa has willingly moved around to different grade levels having taught sixth, fourth, first, kindergarten and now third grade,” Gentry said.

“She serves as the school’s tech coach, helping other teachers during the school day and staying after school to take care of technology issues. She volunteers to serve on the school’s social committee, stays after school to chaperone dances, work concession stands, help with Fall Festival, fundraiser nights, etc. When the COVID-19 pandemic shut schools down last spring, she worked countless hours getting laptops ready for distribution to students and helped with that distribution.

“Professionally, Mrs. Boyd has earned her educational specialist degree from Union College in 2017 in Educational Leadership. She leads multiple trainings on technology hardware and software. She has participated in Eastman Chemical Company’s Mathelites program and East Tennessee State University’s Aerospace Program for Educators. Mrs. Boyd has also served as an evaluator/grader for State Portfolio Assessments.

“And oh, on top of all this, and most importantly, Mrs. Boyd does an excellent job in the classroom. She works tirelessly to first make certain she understands what she is to teach thoroughly, then works just as hard to ensure her students learn the material. Melissa Boyd is a logical and easy choice for any recognition that might come her way.” 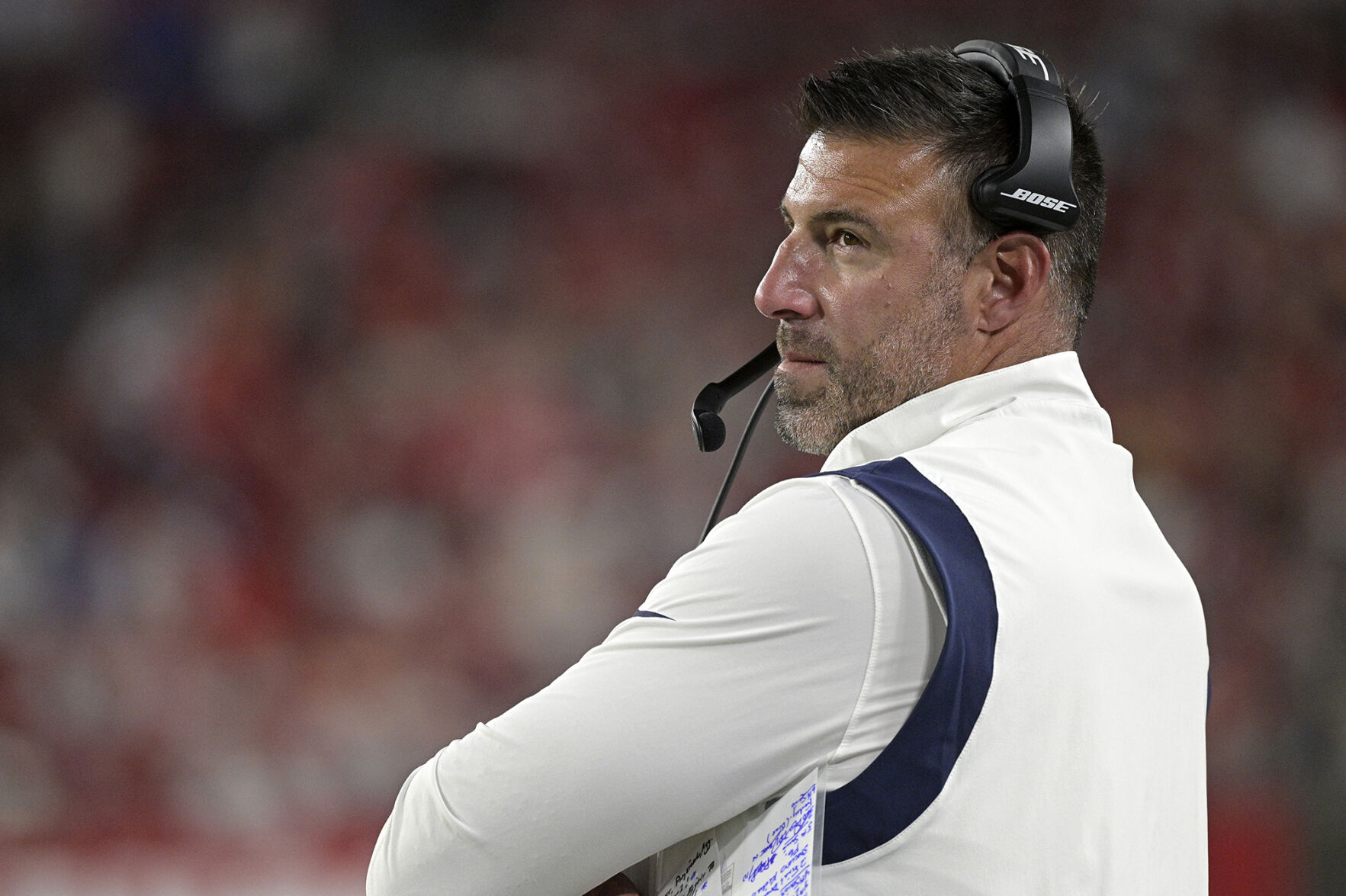 Titans coach Mike Vrabel said Sunday that he tested positive for the coronavirus. Under NFL protocols, Vrabel must have two negative test results within 48 hours to return to Titans headquarters or remain in quarantine for 10 days.

Evelyn's Kitchen Table has plenty of mugs to choose from