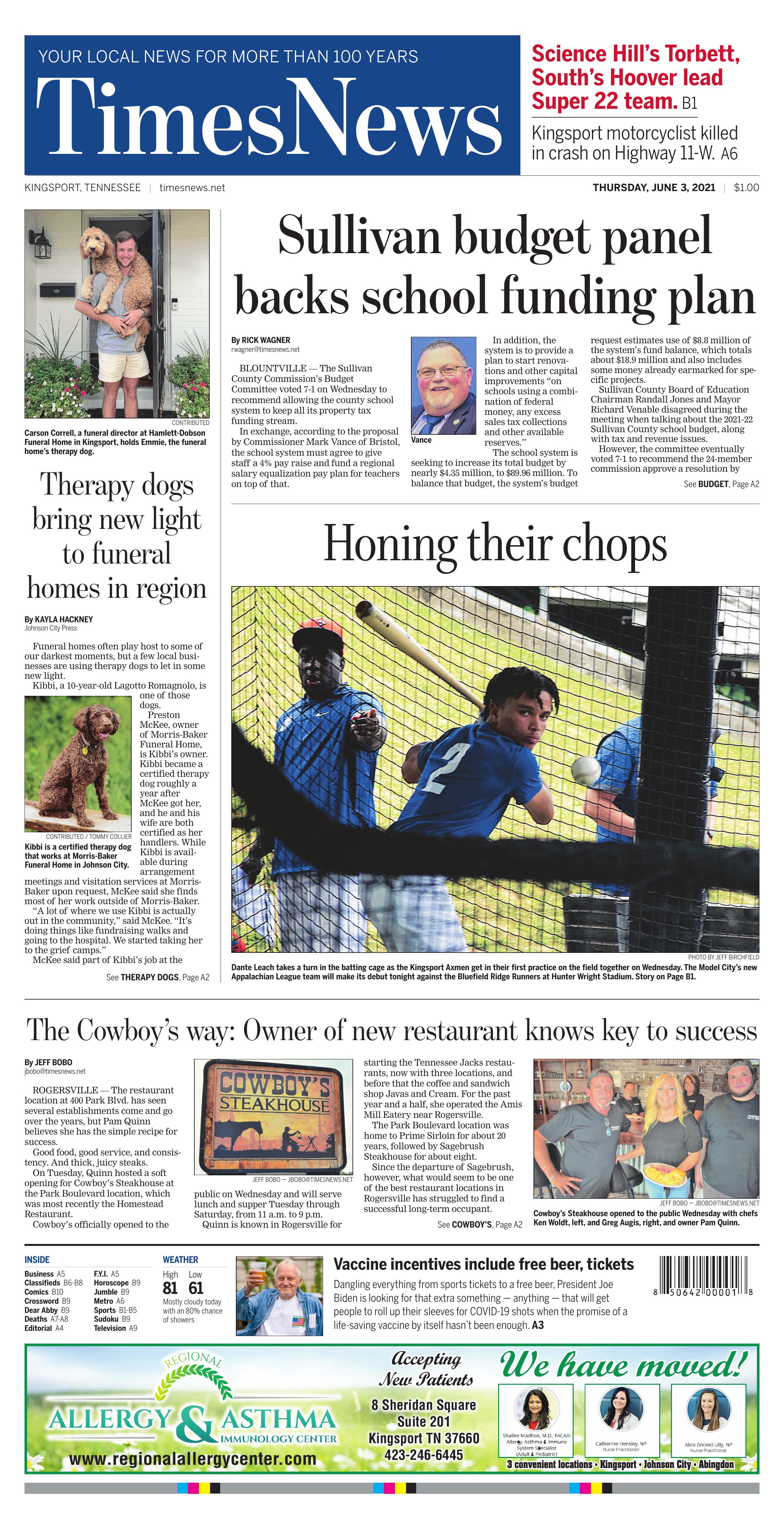 Left to right, Sullivan County Commissioner Mark Vance, in yellow, Leslie Bonner of the county finance office and Finance Director Larry Bailey during the June 2, 2021 commission's Budget Committee meeting. Mayor Richard Venable said he is checking on removing the plastic partition in the commission chambers as the COVID-19 pandemic wanes.

In exchange, according to the proposal by Commissioner Mark Vance of Bristol, the school system must agree to give staff a 4% pay raise and fund a regional salary equalization pay plan for teachers on top of that.

In addition, the system is to provide a plan to start renovations and other capital improvements “on schools using a combination of federal money, any excess sales tax collections and other available reserves.”

The school system is seeking to increase its total budget by nearly $4.35 million, to $89.96 million. To balance that budget, the system’s budget request estimates use of $8.8 million of the system’s fund balance, which totals about $18.9 million and also includes some money already earmarked for specific projects.

Sullivan County Board of Education Chairman Randall Jones and Mayor Richard Venable disagreed during the meeting when talking about the 2021-22 Sullivan County school budget, along with tax and revenue issues.

However, the committee eventually voted 7-1 to recommend the 24-member commission approve a resolution by Vance to keep just more than $2 million in property tax revenues in the general purpose school budget.

Dwight King of Piney Flats voted against the Vance motion, while Vance, Colette George of Kingsport, Sam Jones of Colonial Heights, Randy Morrell of the Offset, John Gardner of Kingsport, Darlene Calton of Sullivan Gardens and Larry Crawford of Kingsport voted for it.

County Finance Director Larry Bailey recently presented the idea to put just more than $2 million in sales tax revenue in the school budget to make up for taking the same amount in property taxes out.

After the meeting, Randall Jones said the vote appears to mean the school budget can move forward as the board proposed with extra sales tax revenue included.

Vance’s full motion and an information sheet answering questions Calton asked school officials at the last Budget Committee meeting are attached to the online version of this article.

In other action, the committee:

• Voted 8-0 to have a final budget vote at its next meeting, June 16. Bailey said that all needed data can be in place by then, and Venable said he foresees a vote on the 2021-22 county budget, including the school budget, in a called meeting before month’s end.

This marks the first year the school budget is operating under a private act that puts school finances, including revenue projections, directly under the county budget office headed by Bailey.

That gives the county control not only over the purse strings of the budget but of projections of property tax and sales tax revenues.

• Voted in a 7-1 vote, with Sam Jones the lone no vote, to recommend the full commission vote to allow the Comptroller of the Treasury, headed by Sullivan County native and former state Rep. Jason Mumpower, to keep federal COVID-19 relief funds and pre-approve their expenditure.

The advantage is the state guarantees the approved projects will meet federal requirements, going so far as to fund the projects if the federal officials later turn them down.

On the other side, however, Jones said the county would lose interest on the money, about $30 million. The school system is to receive another $30 million in a separate federal COVID-19 relief program for education.

Sullivan County school board Chairman Randall Jones, right, and county Mayor Richard Venable, center at front of the room, talk about the 2021…

Many of owner Pam Quinn's staff have been with her for the past six years. She prides herself on offering good food and good service.

On Tuesday Pam Quinn hosted a soft opening for her new Cowboy's Steakhouse at the Park Boulevard location which was most recently the Homestead Restaurant.

On Tuesday Pam Quinn hosted a soft opening for her new Cowboy's Steakhouse at the Park Boulevard location which was most recently the Homestead Restaurant.

ROGERSVILLE — The restaurant location at 400 Park Blvd. has seen several establishments come and go over the years, but Pam Quinn believes she has the simple recipe for success. 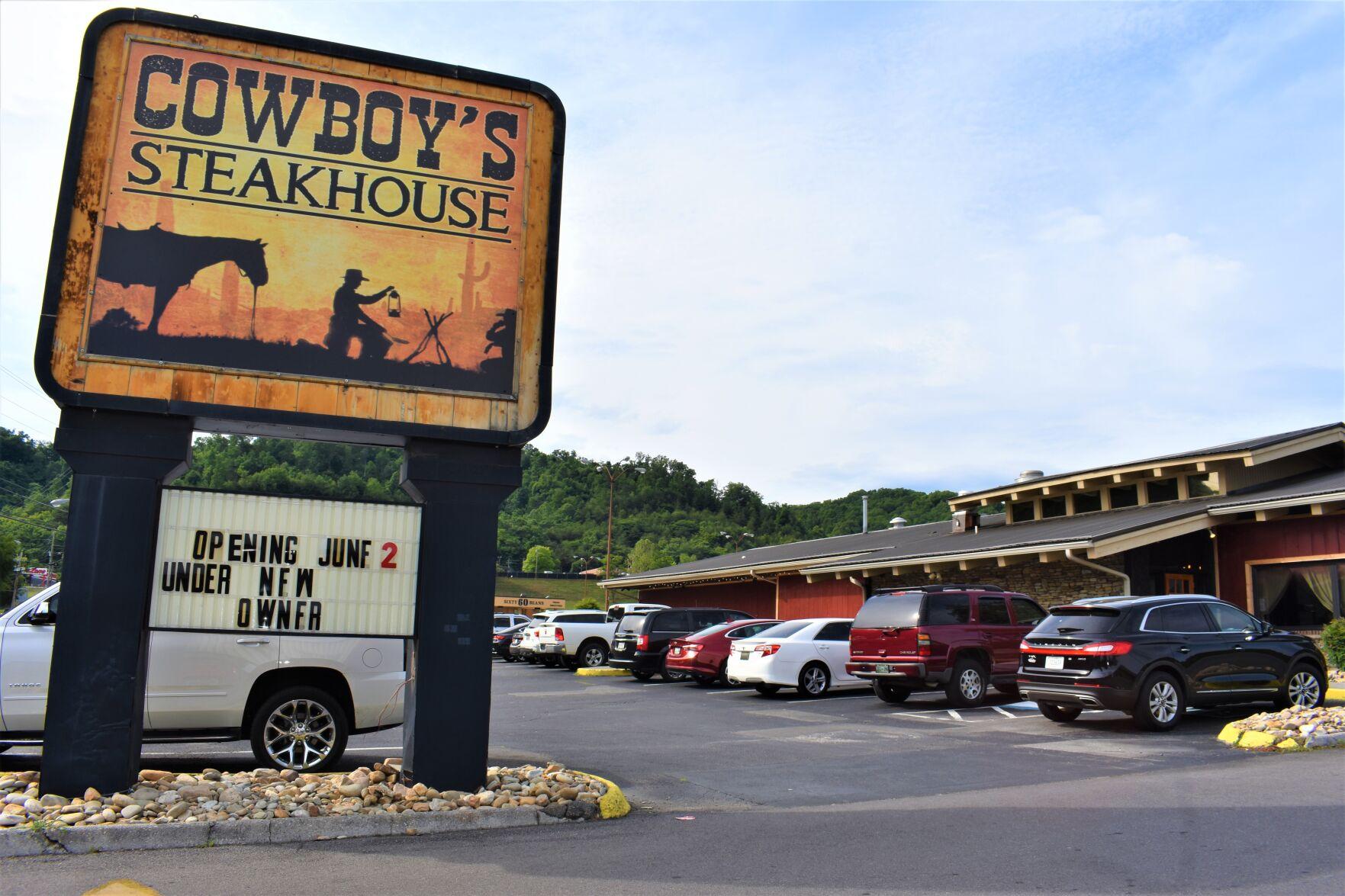 Cowboy's Steakhouse, 400 Park Boulevard, Rogersville, officially opened to the public Wednesday and will serve lunch and supper Tuesday through Saturday, from 11 a.m. to 9 p.m.

On Tuesday, Quinn hosted a soft opening for Cowboy’s Steakhouse at the Park Boulevard location, which was most recently the Homestead Restaurant.

Cowboy’s officially opened to the public on Wednesday and will serve lunch and supper Tuesday through Saturday, from 11 a.m. to 9 p.m.

Quinn is known in Rogersville for starting the Tennessee Jacks restaurants, now with three locations, and before that the coffee and sandwich shop Javas and Cream. For the past year and a half, she operated the Amis Mill Eatery near Rogersville.

The Park Boulevard location was home to Prime Sirloin for about 20 years, followed by Sagebrush Steakhouse for about eight.

Since the departure of Sagebrush, however, what would seem to be one of the best restaurant locations in Rogersville has struggled to find a successful long-term occupant. 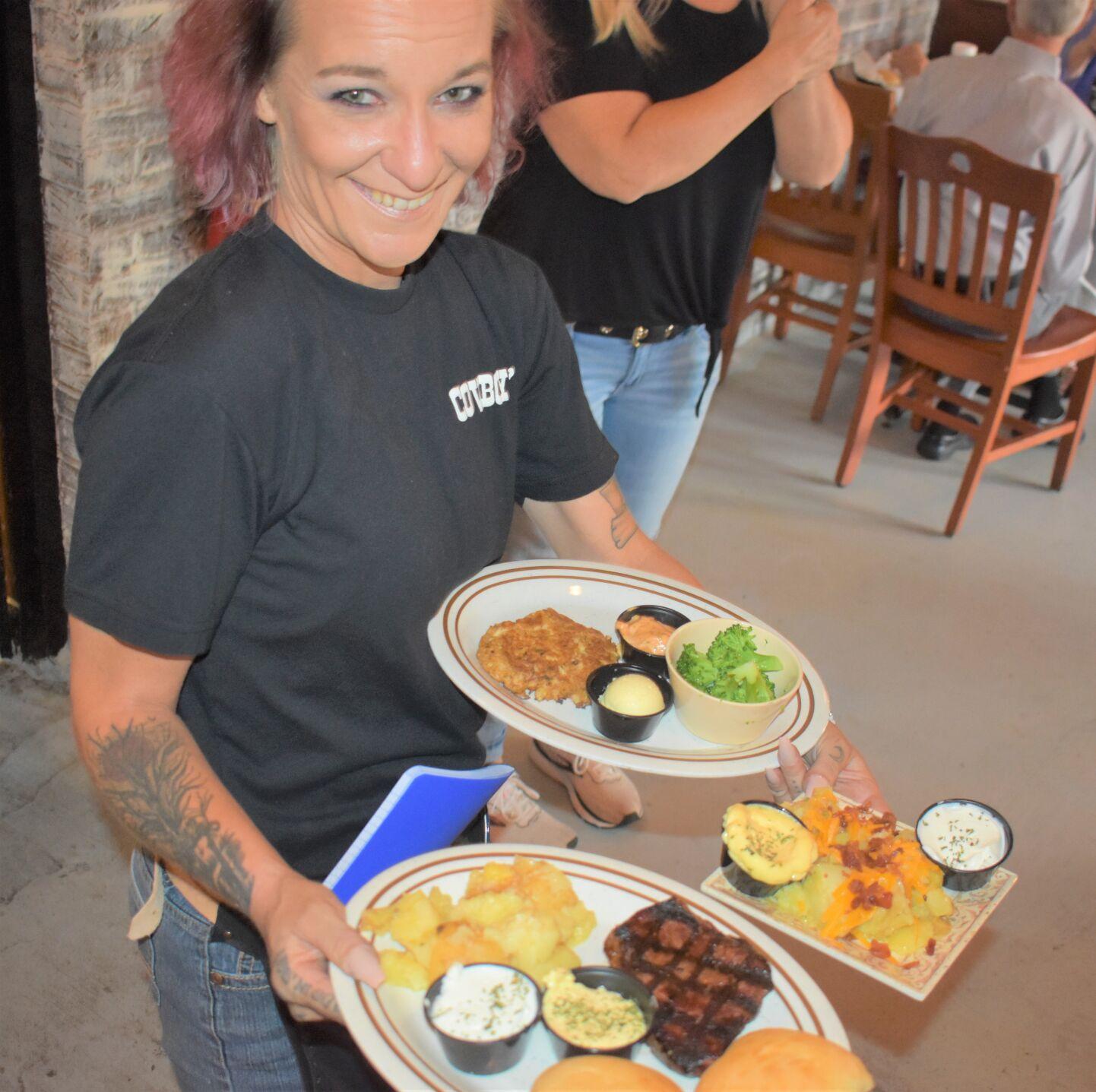 Cowboy's Steakhouse officially opened to the public Wednesday and will serve lunch and supper Tuesday through Saturday, from 11 a.m. to 9 p.m.

Homestead lasted less than a year, but Quinn said that’s not going to happen to Cowboy’s. She knows the secret to success in Rogersville.

They’re also focusing on serving homemade side items like coleslaw, mac and cheese and soups. They do as much as they can from scratch.

“I’ve got a lot of people who have been with me for six years, who started with me from day one,” Quinn said. “I’ve got a good crew of people, in the kitchen and my servers. We just all pitch in and work together, and I’ve got a great team.”

But Cowboy’s begins and ends with the meat. 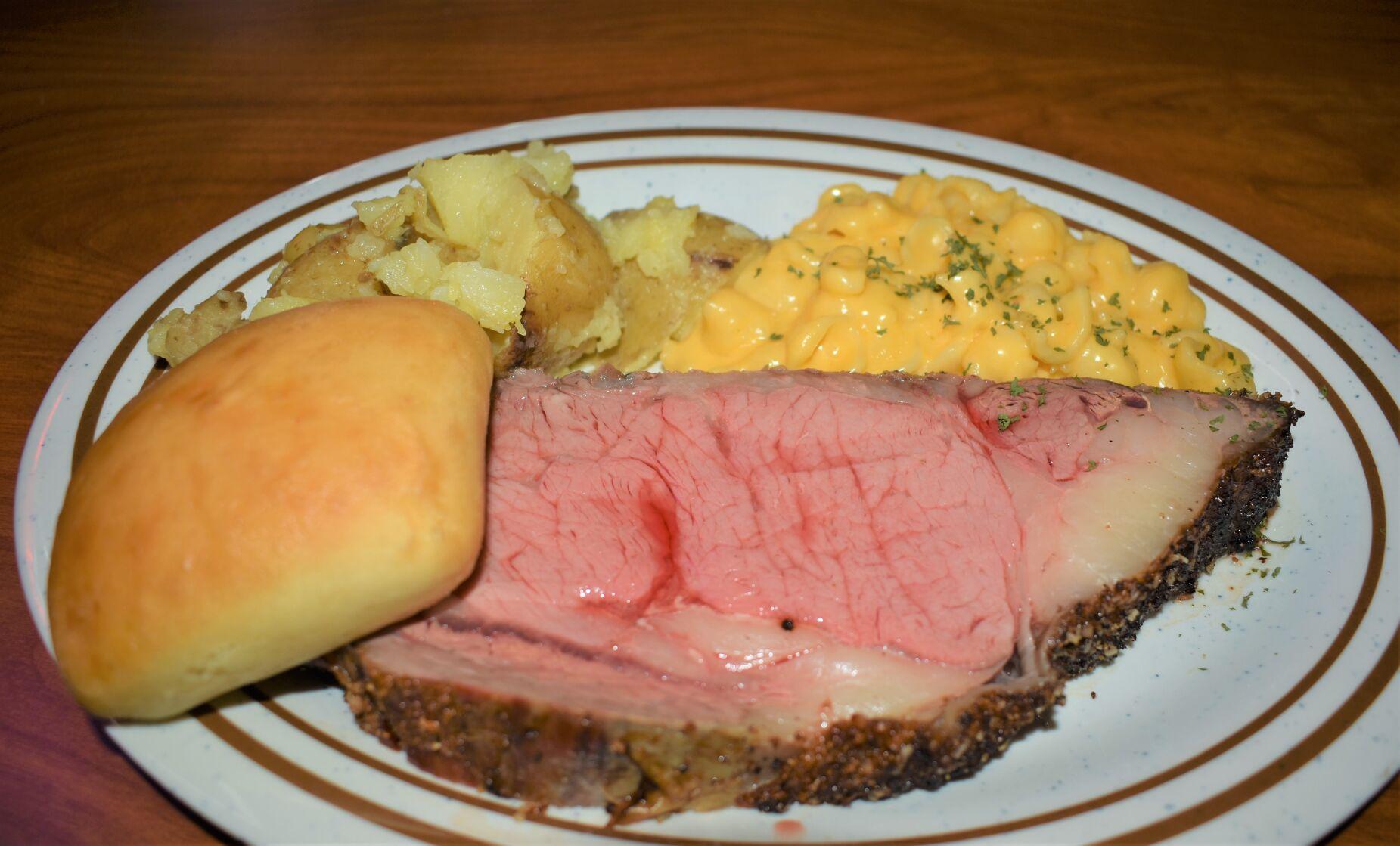 They're focusing on serving homemade side items like coleslaw, mac and cheese, and soups. They do as much as they can from scratch. But, Cowboy's begins and ends with the meat.

“We’re going to specialize in only doing USDA choice steaks,” Quinn said. “We hand cut. They’re never frozen. We also have appetizers. We have some seafood options: crab cakes, shrimp, salmon. We have a lot of other options, and we also have a salad bar at lunch and dinner.”

She added, “My passion is to make sure that the food is really good. That’s what I care about. I just want somebody to tell me that was really delicious.”

In this May 6, 2021 photo, George Ripley, 72, of Washington, holds up his free beer after receiving the J & J COVID-19 vaccine shot, at The REACH at the Kennedy Center in Washington. Free beer is the latest White House-backed incentive for Americans to get vaccinated for COVID-19. President Joe Biden is expected to announce a “month of action” on Wednesday to get more shots into arms before the July 4 holiday.