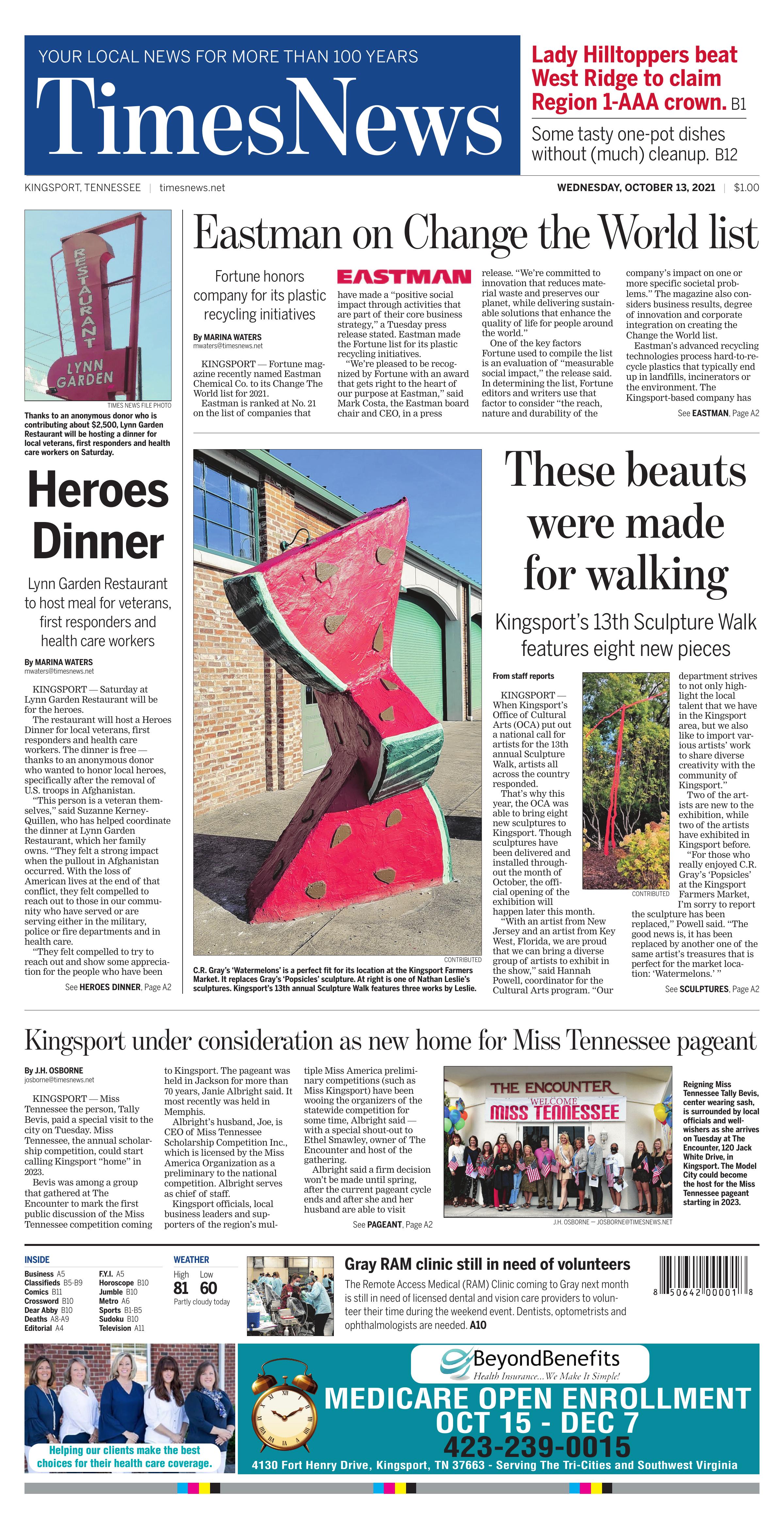 Eastman is ranked at No. 21 on the list of companies that have made a “positive social impact through activities that are part of their core business strategy,” a Tuesday press release stated. Eastman made the Fortune list for its plastic recycling initiatives.

“We’re pleased to be recognized by Fortune with an award that gets right to the heart of our purpose at Eastman,” said Mark Costa, the Eastman board chair and CEO, in a press release. “We’re committed to innovation that reduces material waste and preserves our planet, while delivering sustainable solutions that enhance the quality of life for people around the world.”

One of the key factors Fortune used to compile the list is an evaluation of “measurable social impact,” the release said. In determining the list, Fortune editors and writers use that factor to consider “the reach, nature and durability of the company’s impact on one or more specific societal problems.” The magazine also considers business results, degree of innovation and corporate integration on creating the Change the World list.

Eastman is building the world’s largest polyester molecular recycling facility in Kingsport. The facility is expected to be mechanically complete in late 2022. According to the release, the company’s molecular recycling technologies are an essential element of its sustainability strategy to build “a better circle,” Eastman’s theme for building a better planet and the title of its sustainability report, published in December 2020.

Reigning Miss Tennessee Tally Bevis, center wearing sash, is surrounded by local officials and well-wishers as she arrives Tuesday, Oct. 12, at The Encounter, 120 Jack White Drive, in Kingsport, Tennessee. Kingsport Mayor Pat Shull is to Bevis' right, and Miss Tennessee Scholarship Competition, Inc., Chief of Staff Janie Albright is to Shull's right. Kingsport Board of Education member Melissa Woods, who Albright described as an obvious frontrunner for the position of master of ceremonies if the Miss Tennessee pageant makes Kingsport its new home in 2023, is to Bevis' left, and Alderman Darrell Duncan is to Woods' left.

Bevis was among a group that gathered at The Encounter to mark the first public discussion of the Miss Tennessee competition coming to Kingsport. The pageant was held in Jackson for more than 70 years, Janie Albright said. It most recently was held in Memphis.

Albright’s husband, Joe, is CEO of Miss Tennessee Scholarship Competition Inc., which is licensed by the Miss America Organization as a preliminary to the national competition. Albright serves as chief of staff.

Kingsport officials, local business leaders and supporters of the region’s multiple Miss America preliminary competitions (such as Miss Kingsport) have been wooing the organizers of the statewide competition for some time, Albright said — with a special shout-out to Ethel Smawley, owner of The Encounter and host of the gathering.

Albright said a firm decision won’t be made until spring, after the current pageant cycle ends and after she and her husband are able to visit Kingsport again for a few days.

Moving the annual Miss Tennessee competition to the Northeast tip of the state would be in keeping with what Albright said she and her husband told Miss America officials when they were granted the license for Miss Tennessee by the national organization.

“We told them our state is fabulous from Memphis to Kingsport,” Albright said. “We told them we want to take the show on the road. We need to know Tennessee from one end to the other, and I think Kingsport is a great place to be ‘the other end.’ We are strongly considering it.”

Mayor Pat Shull said having the Miss Tennessee competition come to Kingsport would be “huge” and bring with it an influx of visitors. Shull assured Albright and the others the city, its organizations and businesses have the venues, lodging and other amenities needed to host the event.

Albright said she appreciated and was “blown away” by the effort local leaders and supporters have gone to to show her and others around this week, all of which “makes it so obvious we can’t say ‘no.’ So ... here we come!”

Again, however, Albright said an official decision is months away and noted she is only one vote.

“But I know the CEO pretty well,” Albright joked.

The Miss Tennessee Scholarship Competition is part of the Miss America Organization, which is one of the nation’s leading achievement programs for young women.

One of Nathan Leslie's sculptures is shown here.

KINGSPORT — When Kingsport’s Office of Cultural Arts (OCA) put out a national call for artists for the 13th annual Sculpture Walk, artists all across the country responded.

That’s why this year, the OCA was able to bring eight new sculptures to downtown Kingsport. Though sculptures have been delivered and installed through- out the month of October, the official opening of the exhibition will happen later this month.

“With an artist from New Jersey and an artist from Key West, Florida, we are proud that we can bring a diverse group of artists to exhibit in the show,” said Hannah Powell, coordinator for the Cultural Arts program. “Our department strives to not only highlight the local talent that we have in the Kingsport area, but we also like to import various artists’ work to share diverse creativity with the community of Kingsport.”

“For those who really enjoyed C.R. Gray’s ‘Popsicles’ at the Kingsport Farmers Market, I’m sorry to report the sculpture has been replaced,” Powell said. “The good news is, it has been replaced by another one of the same artist’s treasures that is perfect for the market location: ‘Watermelons.’ ”

Jim Gallucci is also returning, this time bringing two arches: one at City Hall, “Monarch Migration,” and one on the corner of East Market and Commerce Street, “A Flock of Blackbirds.”

Powell hopes that those visiting art galleries like Cindy Saadeh, Suzanne Justis and Up Against the Wall will find his blackbirds arch to be a nice touch to the artistry found on Market Street.

Three of his sculptures can be found along the downtown strip of Broad Street.

Two of the sculptures, “Family” and “Growth,” will be at the intersection with Main Street, and his third one, “Joy,” is a pop of color in the City Hall garden along Church Circle.

The other new artist is Mary Angers of New Jersey. Angers brings a sculpture called “Twisted” at Broad and Center streets that resembles the line structure found in the Noland Plan for the city.

Her second sculpture, “Timeless,” can be found on Broad Street at its intersection with New Street.

The official opening of the exhibition is Oct. 23, with a reception at City Hall, 415 Broad St. Shuttle rides to view the sculptures will begin at 10 a.m. Maps will also be provided for those who prefer to walk. Charlie Brouwer, guest juror, will be visiting to share his insight into the artwork he chose for show.

For more information on the Sculpture Walk, visit www.EngageKingsport.com or call (423) 392-8414.

Veterans, first responders and healthcare workers can make a reservation for a free dinner for Saturday, Oct. 16, at Lynn Garden Restaurant.

Lynn Garden restaurant has been a staple of Kingsport and the Lynn Garden community for over 70 years.

KINGSPORT — Saturday at Lynn Garden Restaurant will be for the heroes.

The restaurant will host a Heroes Dinner for local veterans, first responders and health care workers. The dinner is free — thanks to an anonymous donor who wanted to honor local heroes, specifically after the removal of U.S. troops in Afghanistan.

“This person is a veteran themselves,” said Suzanne Kerney-Quillen, who has helped coordinate the dinner at Lynn Garden Restaurant, which her family owns. “They felt a strong impact when the pullout in Afghanistan occurred. With the loss of American lives at the end of that conflict, they felt compelled to reach out to those in our community who have served or are serving either in the military, police or fire departments and in health care.

“They felt compelled to try to reach out and show some appreciation for the people who have been serving our communities so selflessly.”

The dinner will be limited to 200 veterans, first responders or health care workers who set a reservation through the restaurant for either 2 or 5 p.m. The meal will include a main course with sides from a set menu with a drink and a dessert.

The donor, who is estimated to spend about $2,500 on meals for the Heroes Dinner, asked the owners of Lynn Garden Restaurant that they keep his or her name from the public in order to keep the focus on those he or she aims to honor.

“They didn’t want any recognition for it,” Quillen said. “They wanted the focus to be on the veterans and the local heroes and not on themselves. They thought attaching their names to it was just irrelevant to what they were trying to do.”

The mysterious donor also inspired others to join in.

One woman called the restaurant asking that some meals be delivered to local police. The woman chipped in $100 to ensure police officers who might not have the time to stop in for a meal still receive a dinner.

“(The donor) recognizes too many of these first responders, particularly the firemen and police officers, may not be able to leave their work area for a sit-down dinner, which was the donor’s first wish,” the restaurant’s co-owner Keltie Kerney said. “So they’re receptive to these folks coming through the drive-thru and making a reservation to pick up a meal to go.”

On Saturday and throughout the week, the restaurant will also accept items to donate to local veteran organizations and area hospitals. Quillen said items such as Kleenex, hand sanitizer, puzzles and sudoku books, wipes, sprays, hygiene products, stationery, cards and magazines are suggested.

The owners of Lynn Garden Restaurant might have thought they were just organizing a dinner at the request of a local veteran wanting to say “thanks” to local heroes. But Quillen said the interest in helping and donating for the event has proved even more about the community.

“It just shows what a caring community we have,” Quillen said. “People recognize the hard work that has been going on with our health care workers and firefighters and police, rescue personnel and our veterans. “It’s just been a very trying time for the whole country and the whole world. It’s neat we live in a place with such compassionate folks who want to give back.”

For local veterans, first responders or health care workers who wish to attend, call or fill out the reservation form at https://forms.gle/5SAz47V4HG4o7pf1A.

Lynn Garden Restaurant is located at 1105 Lynn Garden Drive. More information on the restaurant, as well as the Heroes Dinner, is available at https://www.facebook.com/LynnGardenRestaurant/. 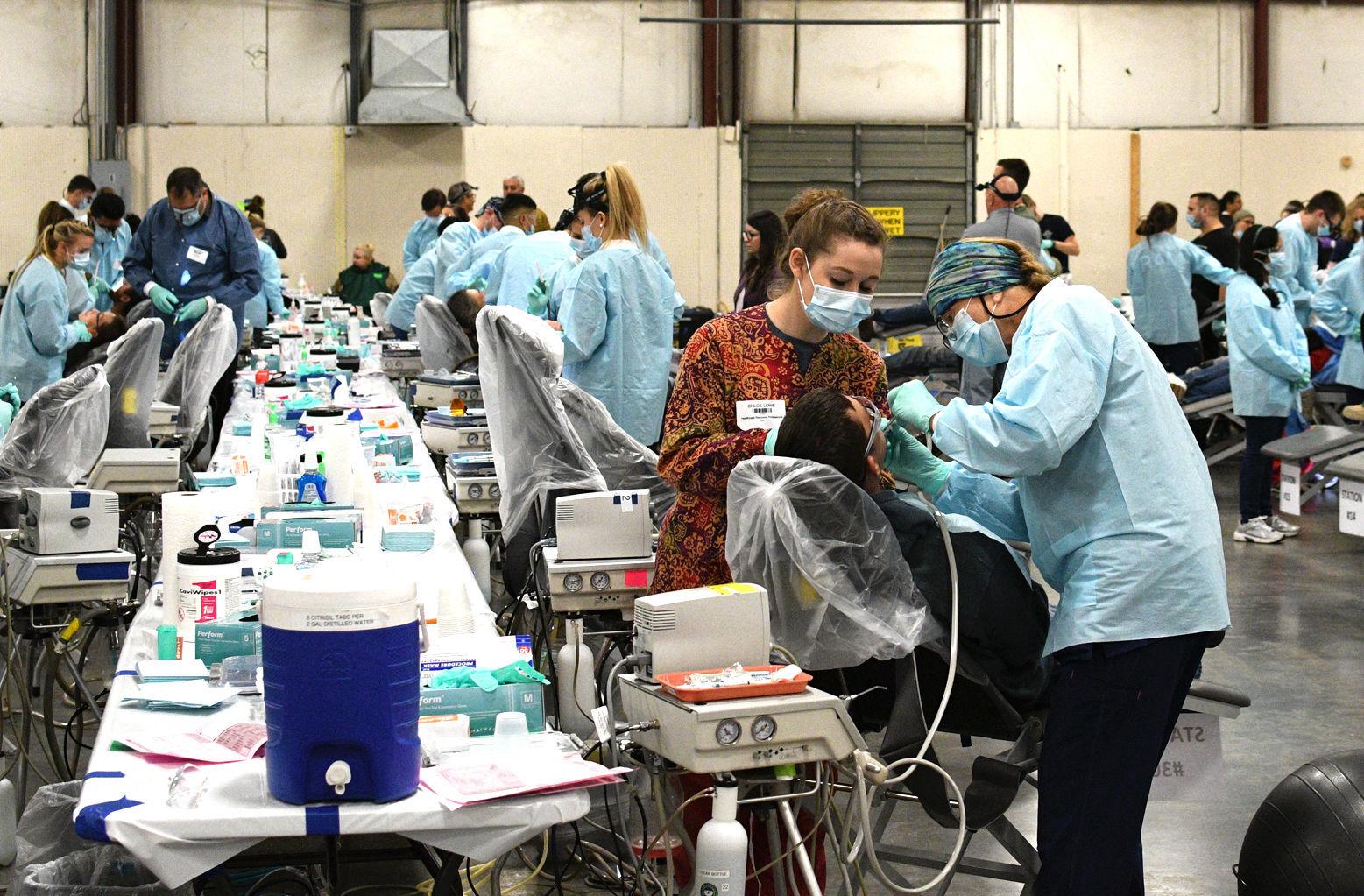 Shown in this photo from the 2019 RAM, volunteer dental providers treat patients at the 2019 RAM clinic in Gray, Tennessee.