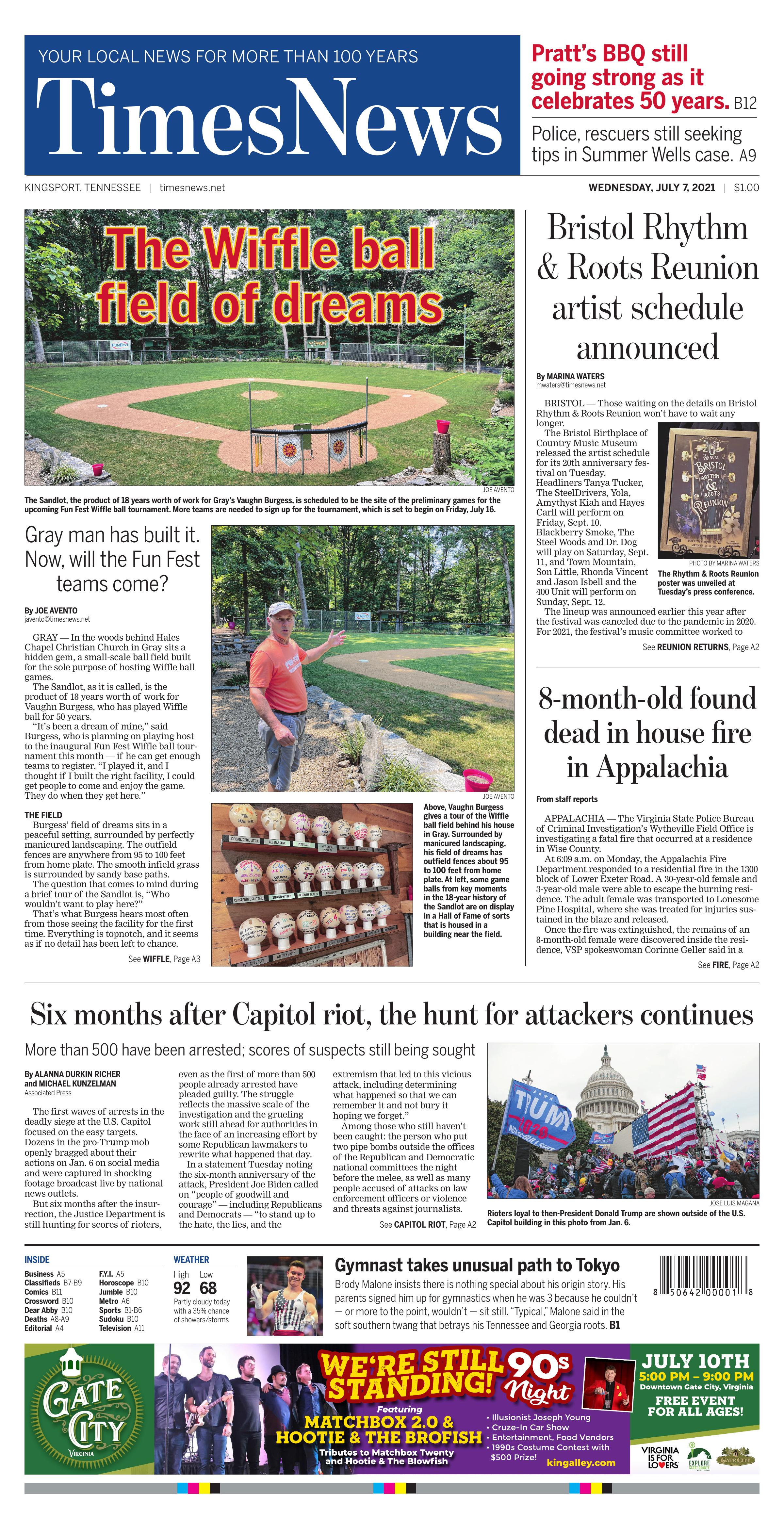 Above, Vaughn Burgess gives a tour of the Wiffle ball field behind his house in Gray. Surrounded by manicured landscaping, his field of dreams has outfield fences about 95 to 100 feet from home plate. At left, some game balls from key moments in the 18-year history of the Sandlot are on display in a Hall of Fame of sorts that is housed in a building near the field.

A view of the Sandlot from the outfield.

Some game balls from key moments in the 18-year history of the Sandlot are on display in a building near the field.

The spot for a game ball from the Fun Fest tournament is being reserved at the top.

One of the balls on display is from when Vaughn Burgess hit a home run from each side of the plate in the same game.

Vaughn Burgess with some game balls from key moments in the 18-year history of his Wiffle ball field.

The brackets are ready to be filled.

Meticulous stats are kept from the adult league that plays each Sunday afternoon.

GRAY — In the woods behind Hales Chapel Christian Church in Gray sits a hidden gem, a small-scale ball field built for the sole purpose of hosting Wiffle ball games.

The Sandlot, as it is called, is the product of 18 years worth of work for Vaughn Burgess, who has played Wiffle ball for 50 years.

“It’s been a dream of mine,” said Burgess, who is planning on playing host to the inaugural Fun Fest Wiffle ball tournament this month — if he can get enough teams to register. “I played it, and I thought if I built the right facility, I could get people to come and enjoy the game. They do when they get here.”

Burgess’ field of dreams sits in a peaceful setting, surrounded by perfectly manicured landscaping. The outfield fences are anywhere from 95 to 100 feet from home plate. The smooth infield grass is surrounded by sandy base paths. 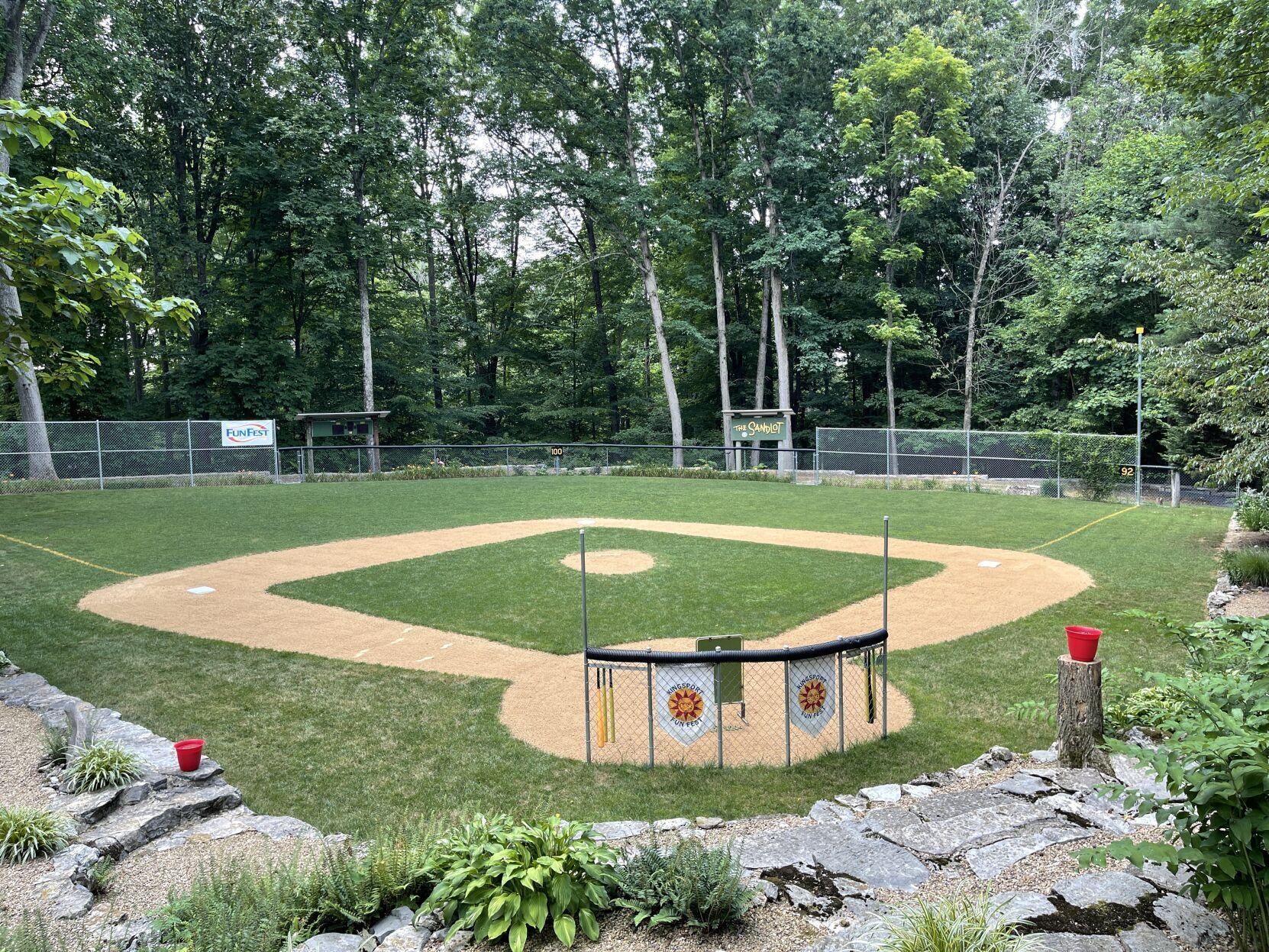 The Sandlot, the product of 18 years worth of work for Gray’s Vaughn Burgess, is scheduled to be the site of the preliminary games for the upcoming Fun Fest Wiffle ball tournament. More teams are needed to sign up for the tournament, which is set to begin on Friday, July 16.

The question that comes to mind during a brief tour of the Sandlot is, “Who wouldn’t want to play here?”

That’s what Burgess hears most often from those seeing the facility for the first time. Everything is topnotch, and it seems as if no detail has been left to chance.

Just getting the people here is the trick, especially for the Fun Fest tournament.

“Most people don’t know anything about this,” he said. “We’ve never marketed this place, ever. For Fun Fest, I need to get the word out to the kids that we’re here. If you ever wanted to play Wiffle ball, here’s your chance. Here’s a field to play on.”

The Fun Fest tournament is for teams of six players, all of whom have to be 17 years old or younger.

The hopeful field of 12 teams in the double-elimination tournament will begin on Friday, July 16. All of the games will be played at the Sandlot, with the championship game being held at the Miracle Field in Kingsport.

“We need to get some teams in here,” Burgess said, pointing to the bracket. “There’s a few signed up, but we need to get 12 and they’ve got less than two weeks.”

PASSION FOR THE GAME

Burgess’ love affair with Wiffle ball began years ago, and his passion hasn’t waned. There’s pure excitement in his voice as he talks about his favorite game.

The field is the site of numerous events, from a Sunday league for all comers to hosting youth groups.

“Everybody who plays Wiffle ball has their own rules,” Burgess said. “We have our own rules, too. Those have been developed over 50 years. We’ve developed rules that let girls play, children under 10 play, men and women over 65, and it’s fair for everybody. It’s really nice. You can come out here at any age and play Wiffle ball with us.”

One of the little-known rules is that you can throw the ball at a base runner to get them out.

Pitching is a different matter. There are no fastballs at this field. “Half speed” is how the style of pitching is described under the local rules, and every pitch has to have some arc on it. The games are self-umpired by the players.

“We’ve never had a fight here in 18 years,” Burgess said. “We’ve had some bumped heads, but never a fight.”

There is a Hall of Fame of sorts in the building next to the field. It houses game balls from special moments, like the time a player hit his 73rd home run in a season to set the Sandlot record or when Burgess became the first player to hit home runs from both sides of the plate in the same game.

There’s also a pyramid of special balls, with the top spot being saved for the game ball from the first Fun Fest game.

“Fun Fest has been my goal for a long time,” Burgess said. “I’ve wanted to try to get an organized event going. It’s really a fun game. I know the players are out there. I just have to find them.”

Registration for teams in the Wiffle ball tournament — and all Fun Fest events — can be done on the website, www.funfest.net.

Jason Isbell and the 400 Unit will no longer headline the Bristol Rhythm and Roots Reunion on Sunday, Sept. 12.

The Steel Woods will take to the Bristol Rhythm and Roots stage on Saturday, Sept. 11.

Yola announced via twitter she would not be performing at the Bristol festival.

The Birthplace of Country Music Museum in Bristol unveiled the artist schedule on Tuesday.

Jason Isbell and the 400 Unit will no longer headline the Bristol Rhythm and Roots Reunion on Sunday, Sept. 12.

BRISTOL — Those waiting on the details on Bristol Rhythm & Roots Reunion won’t have to wait any longer.

The Bristol Birthplace of Country Music Museum released the artist schedule for its 20th anniversary festival on Tuesday. Headliners Tanya Tucker, The SteelDrivers, Yola, Amythyst Kiah and Hayes Carll will perform on Friday, Sept. 10. Blackberry Smoke, The Steel Woods and Dr. Dog will play on Saturday, Sept. 11, and Town Mountain, Son Little, Rhonda Vincent and Jason Isbell and the 400 Unit will perform on Sunday, Sept. 12.

The lineup was announced earlier this year after the festival was canceled due to the pandemic in 2020. For 2021, the festival’s music committee worked to return the names on the 2020 lineup for the 20th anniversary event.

“The music committee nailed it,” said Brent Treash, incoming president of the Bristol Country Music Board of Directors. “We were able to bring back most of the lineup from 2020. The response to our lineup has been amazing. Everywhere I go to see live music, people are talking about it. It’s humbling.”

This year’s festival will also include an additional music event.

Cruz Contreras, the lead singer of The Black Lillies, will perform at the festival’s kickoff event on Thursday along with special musical guests who are yet to be announced. Tickets for that event are on sale now at https://www.tixr.com/groups/bcm/events/bristol-rhythm-roots-reunion- 20167.

The 2021 festival poster by English designer Matt Bridges was also unveiled on Tuesday. The poster, along with this year’s T-shirt, is now available online and in the museum shop.

BCM also announced the festival will not include the typical booklets. Instead, a pocket schedule and map will be printed in Bristol’s local papers and at festival gates. A festival app will also help provide info to concertgoers.

“We felt our resources were best put to use by producing a quality mobile app ...” said Leah Ross, the executive director of the Birthplace of Country Music. “Changes can be made at a moment’s notice and without waste.”

APPALACHIA — The Virginia State Police Bureau of Criminal Investigation’s Wytheville Field Office is investigating a fatal fire that occurred at a residence in Wise County.

At 6:09 a.m. on Monday, the Appalachia Fire Department responded to a residential fire in the 1300 block of Lower Exeter Road. A 30-year-old female and 3-year-old male were able to escape the burning residence. The adult female was transported to Lonesome Pine Hospital, where she was treated for injuries sustained in the blaze and released.

Once the fire was extinguished, the remains of an 8-month-old female were discovered inside the residence, VSP spokeswoman Corinne Geller said in a news release. The child’s remains have been transported to the office of the chief medical examiner in Roanoke for examination and autopsy.

The Wise County Sheriff’s Office reported that internet and phone service were interrupted in the Exeter area.

At this stage of the investigation, the fire does not appear to be suspicious in nature, Geller said.

The origin and cause of the fire remain under investigation, Geller noted.