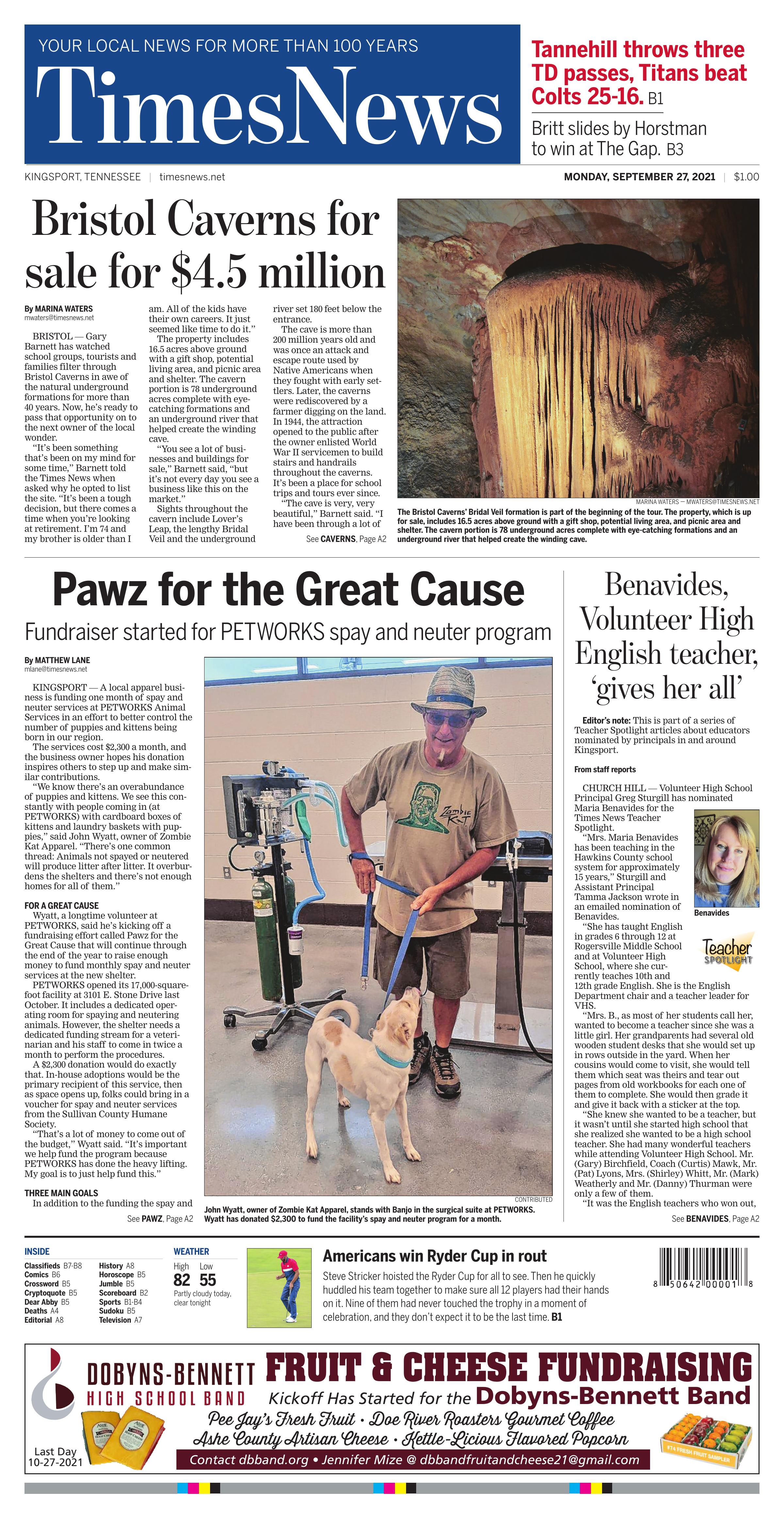 Local-news
centerpiece
Watch now: ‘No man could build anything like this:’ Bristol Caverns for sale for $4.5 million
Marina / MARINA WATERS — mwaters@timesnews.net

Bristol Caverns opened to the public in 1944 after the owner enlisted World War II servicemen to build stairs and handrails throughout the attraction. It’s been a place for school trips and tours ever since.

The Bristol Caverns’ Bridal Veil formation is part of the beginning of the tour. The property, which is up for sale, includes 16.5 acres above ground with a gift shop, potential living area, and picnic area and shelter. The cavern portion is 78 underground acres complete with eye-catching formations and an underground river that helped create the winding cave.

BRISTOL — Gary Barnett has watched school groups, tourists and families filter through Bristol Caverns in awe of the natural underground formations for more than 40 years. Now, he’s ready to pass that opportunity on to the next owner of the local wonder.

“It’s been something that’s been on my mind for some time,” Barnett told the Times-News when asked why he opted to list the site. “It’s been a tough decision, but there comes a time when you’re looking at retirement. I’m 74 and my brother is older than I am. All of the kids have their own careers. It just seemed like time to do it.” 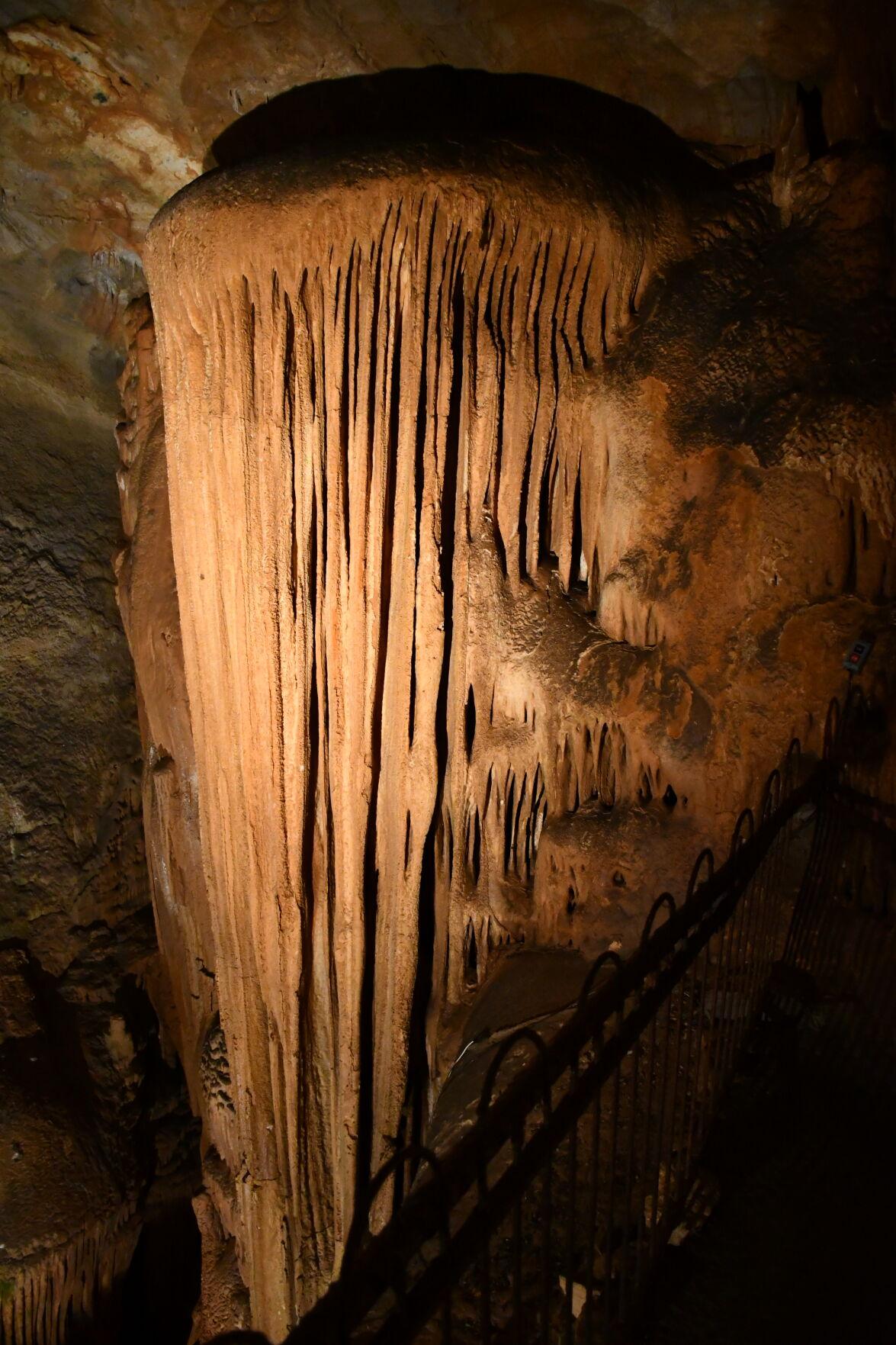 The property includes 16.5 acres above ground with a gift shop, potential living area, and picnic area and shelter. The cavern portion is 78 underground acres complete with eye-catching formations and an underground river that helped create the winding cave.

“You see a lot of businesses and buildings for sale,” Barnett said, “but it’s not every day you see a business like this on the market.”

Sights throughout the cavern include Lover’s Leap, the lengthy Bridal Veil and the underground river 180 feet below the entrance.

The cave is more than 200 million years old and was once an attack and escape route used by Native Americans when they fought with early settlers. Later, the caverns were rediscovered by a farmer digging on the land. In 1944, the attraction opened to the public after the owner enlisted World War II servicemen to build stairs and handrails throughout the caverns. It’s been a place for school trips and tours ever since.

“The cave is very, very beautiful,” Barnett said. “I have been through a lot of caves throughout the country and this cave is very pretty. It has a river and formations through it. It’s a very well decorated cave.”

One of the highlights Barnett has enjoyed over the years has been hearing reviews from those coming back to the gift shop at the end of a tour.

“It’s always a joy to share the beauty of it with other people from other places,” Barnett said. “We get a lot of foreign visitors. Just listening to their comments when they come out of the cave is always great. I really enjoy the people and their comments.”

The attraction remains open for tours for the foreseeable future, Barnett said. He said he isn’t in a rush to sell. He’s concerned about seeing the caverns remain a preserved natural wonder for years to come, though.

“We want someone who will show it as what it is,” Barnett said. “No man could build anything like this. It’s all part of God’s creation. He made it. No one could make anything like this. It just needs to be preserved and protected and presented in that way. I just want to make sure it falls into the right hands.”

Tickets are $16 for adults (13 and up), $14 for seniors and military members, $8 for ages 5-12 and kids 4 and under are free. Group rates are also available. Ticket prices are subject to change. For more information, go to https://bristolcaverns.com/.

The listing can be viewed here.

Related
0:14 Bristol Caverns offers a peak inside the lengthy cave that is up for sale
MARINA WATERS mwaters@timesnews.net
Sep 27, 2021

Bristol Caverns is available for $4.5 million. Formations, including the popular Bridal Veil formation seen in the beginning of the video, hav…

0:30 Take a look inside the Bristol Caverns currently for sale for $4.5 million
MARINA WATERS mwaters@timesnews.net
Sep 27, 2021

Bristol Caverns gave the Kingsport Times-News a tour of the underground attraction, which is now listed for $4.5 million dollars. The Caverns …

KINGSPORT — A local apparel business is funding one month of spay and neuter services at PETWORKS Animal Services in an effort to better control the number of puppies and kittens being born in our region.

The services cost $2,300 a month, and the business owner hopes his donation inspires others to step up and make similar contributions.

“We know there’s an overabundance of puppies and kittens. We see this constantly with people coming in (at PETWORKS) with cardboard boxes of kittens and laundry baskets with puppies,” said John Wyatt, owner of Zombie Kat Apparel. “There’s one common thread: Animals not spayed or neutered will produce litter after litter. It overburdens the shelters and there’s not enough homes for all of them.”

FOR A GREAT CAUSE

Wyatt, a longtime volunteer at PETWORKS, said he’s kicking off a fundraising effort called Pawz for the Great Cause that will continue through the end of the year to raise enough money to fund monthly spay and neuter services at the new shelter.

PETWORKS opened its 17,000-square-foot facility at 3101 E. Stone Drive last October. It includes a dedicated operating room for spaying and neutering animals. However, the shelter needs a dedicated funding stream for a veterinarian and his staff to come in twice a month to perform the procedures.

A $2,300 donation would do exactly that. In-house adoptions would be the primary recipient of this service, then as space opens up, folks could bring in a voucher for spay and neuter services from the Sullivan County Humane Society.

“That’s a lot of money to come out of the budget,” Wyatt said. “It’s important we help fund the program because PETWORKS has done the heavy lifting. My goal is to just help fund this.”

In addition to the funding the spay and neuter program, Wyatt said he has two other goals for his fundraiser: to promote an awareness in the community that folks need to spay and neuter their pets and to increase community involvement with local businesses holding special events to raise funds for the program.

And if you can’t afford the $2,300 donation, you could do smaller amounts Wyatt said, such as $1,150 for one day of service or even $288 to fund an hour of the veterinarian’s time and effort. At this point, PETWORKS is able to perform five to six spays and neuters a day, but would like to see that number grow to 25 or 30 as the medical staff becomes more fine-tuned.

“We’ve tried to approach this issue from the rear for so long — getting the pets adopted and into a home. Now, we’d like to try a different approach,” Wyatt said. “Having dogs and cats spayed and neutered shortens the adoption time, it expedites the process and prevents the continuous cycle of pregnancy and dropping off a litter, not only at PETWORKS but other shelters and vets.”

If you’d like to make a donation toward the spay and neuter program, you can do so at the PETWORKS facility. For more information, call (423) 247-1671.

Editor’s note: This is part of a series of Teacher Spotlight articles about educators nominated by principals in and around Kingsport.

“Mrs. Maria Benavides has been teaching in the Hawkins County school system for approximately 15 years,” Sturgill and Assistant Principal Tamma Jackson wrote in an emailed nomination of Benavides.

“She has taught English in grades 6 through 12 at Rogersville Middle School and at Volunteer High School, where she currently teaches 10th and 12th grade English. She is the English Department chair and a teacher leader for VHS.

“Mrs. B., as most of her students call her, wanted to become a teacher since she was a little girl. Her grandparents had several old wooden student desks that she would set up in rows outside in the yard. When her cousins would come to visit, she would tell them which seat was theirs and tear out pages from old workbooks for each one of them to complete. She would then grade it and give it back with a sticker at the top.

“She knew she wanted to be a teacher, but it wasn’t until she started high school that she realized she wanted to be a high school teacher. She had many wonderful teachers while attending Volunteer High School. Mr. (Gary) Birchfield, Coach (Curtis) Mawk, Mr. (Pat) Lyons, Mrs. (Shirley) Whitt, Mr. (Mark) Weatherly and Mr. (Danny) Thurman were only a few of them.

“Mrs. Benavides teaches for one reason: the students. She is always there for her ‘kiddos’ as she calls them. If they need help with anything, she is at school at 6:45 every morning and stays many times in the afternoons to help in whatever way she can. Mrs. Benavides also tries to help the staff and administration with anything from mentoring new teachers to collecting tickets at the gate of sporting events. She always tries to pitch in when she can.”

The administrators said that is one of the greatest things about Benavides: her willingness to give.

“She gives her all in trying to help her students, her school, and her community. She is an asset, not only for those of us here at Volunteer High School, but also for the entire Hawkins County region,” the administrators wrote. “We are so fortunate to have her here.”

Benavides said she loves to teach at Volunteer.

“I thank God for every blessing he has given me, which includes the blessing of being able to teach at my alma mater, Volunteer High School,” she said.

English teacher Maria Benavides teaches in her classroom at Volunteer High School. The administration of the Hawkins County school has nominat…

Team USA's Dustin Johnson reacts to his putt on the 17th hole during a Ryder Cup singles match at the Whistling Straits Golf Course Sunday, Sept. 26, 2021, in Sheboygan, Wis.

Take a look inside the Bristol Caverns currently for sale for $4.5 million