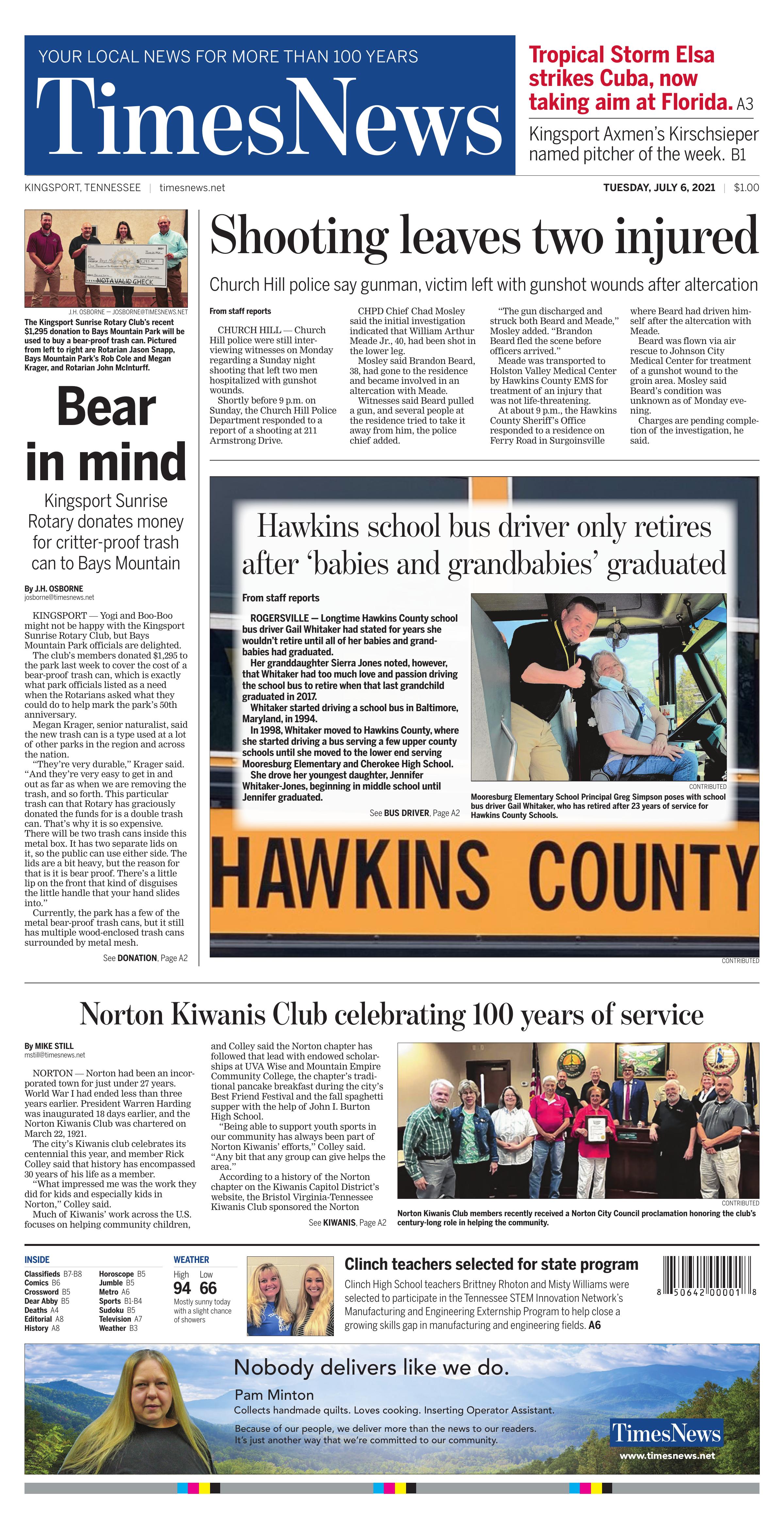 Shortly before 9 p.m. on Sunday, the Church Hill Police Department responded to a report of a shooting at 211 Armstrong Drive.

Mosley said Brandon Beard, 38, had gone to the residence and became involved in an altercation with Meade.

Witnesses said Beard pulled a gun, and several people at the residence tried to take it away from him, the police chief added.

“The gun discharged and struck both Beard and Meade,” Mosley added. “Brandon Beard fled the scene before officers arrived.”

Meade was transported to Holston Valley Medical Center by Hawkins County EMS for treatment of an injury that was not life-threatening.

At about 9 p.m., the Hawkins County Sheriff’s Office responded to a residence on Ferry Road in Surgoinsville where Beard had driven himself after the altercation with Meade.

Beard was flown via air rescue to Johnson City Medical Center for treatment of a gunshot wound to the groin area. Mosley said Beard’s condition was unknown as of Monday evening.

Charges are pending completion of the investigation, he said. 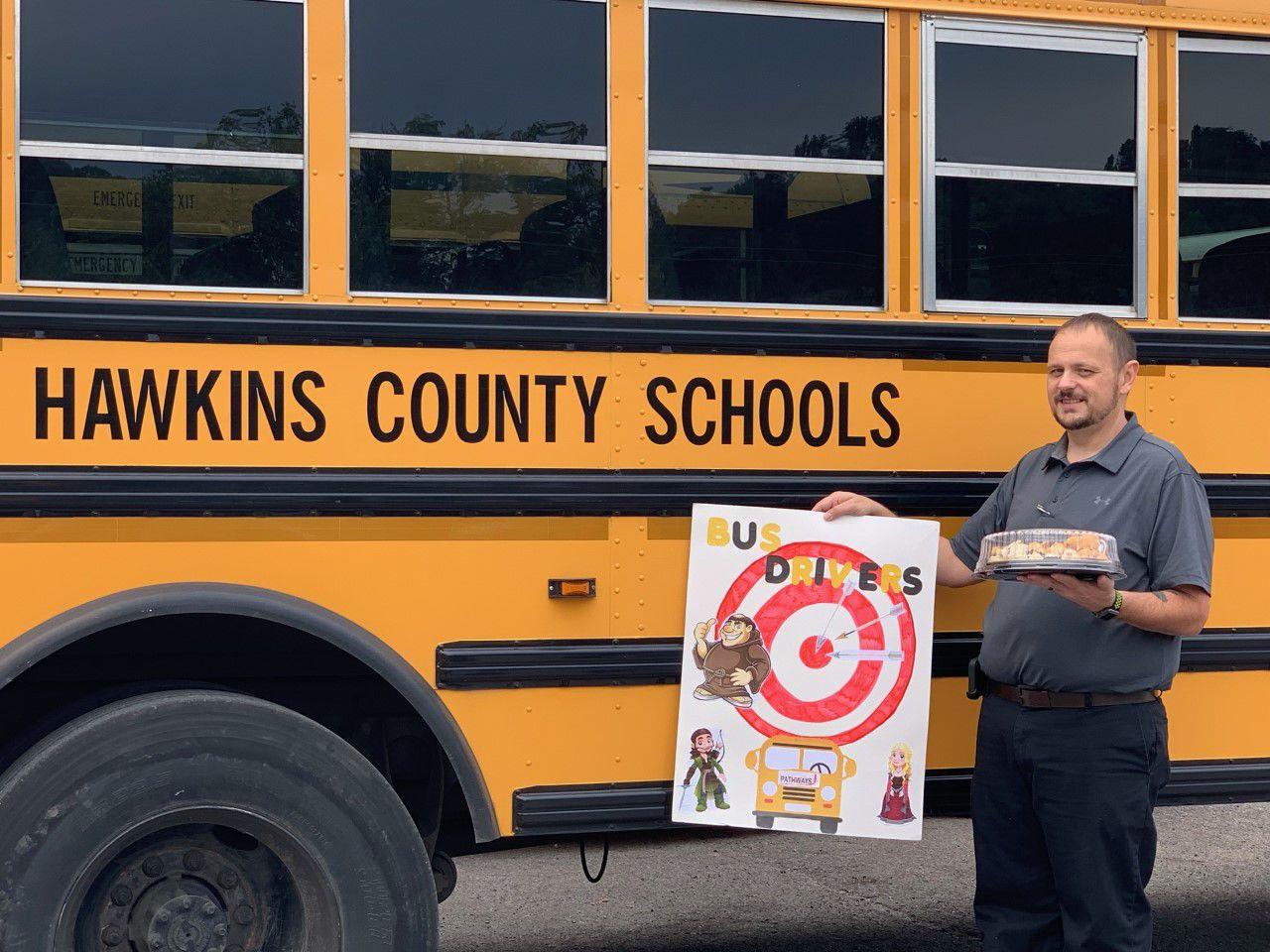 ROGERSVILLE — Longtime Hawkins County school bus driver Gail Whitaker had stated for years she wouldn’t retire until all of her babies and grand- babies had graduated.

Her granddaughter Sierra Jones noted, however, that Whitaker had too much love and passion driving the school bus to retire when that last grandchild graduated in 2017.

Whitaker started driving a school bus in Baltimore, Maryland, in 1994.

In 1998, Whitaker moved to Hawkins County, where she started driving a bus serving a few upper county schools until she moved to the lower end serving Mooresburg Elementary and Cherokee High School.

Whitaker also drove her granddaughter Sierra Jones from her very first day of pre-K until she graduated in 2017 from Cherokee High School.

Jones said her grandmother, who retired at the end of the 2020-21 school year, is sad and will miss driving the bus, but it’s time that she retires and takes care of her babies, grandbabies and great-grandbabies.

Upon her retirement, Whitaker’s graduating senior passengers thanked her for being a great school bus driver and that it meant a lot to her. She drove a total of 27 years, most of them in Hawkins County.

“As we close out this very memorable year, we would love to thank you for everything you have done for our community and keeping the students safe that have ridden your bus over these years,” Benevides said. “Your dedication to the future of our students in transporting them to and from school each day is valued more than we can say. Please know you will be missed by the school, the community, and the students you have impacted on that daily drive to and from school. Thank you for everything that you have done for us.”

NORTON — Norton had been an incorporated town for just under 27 years. World War I had ended less than three years earlier. President Warren Harding was inaugurated 18 days earlier, and the Norton Kiwanis Club was chartered on March 22, 1921.

The city’s Kiwanis club celebrates its centennial this year, and member Rick Colley said that history has encompassed 30 years of his life as a member.

“What impressed me was the work they did for kids and especially kids in Norton,” Colley said.

Much of Kiwanis’ work across the U.S. focuses on helping community children, and Colley said the Norton chapter has followed that lead with endowed scholarships at UVA Wise and Mountain Empire Community College, the chapter’s traditional pancake breakfast during the city’s Best Friend Festival and the fall spaghetti supper with the help of John I. Burton High School.

“Being able to support youth sports in our community has always been part of Norton Kiwanis’ efforts,” Colley said. “Any bit that any group can give helps the area.”

According to a history of the Norton chapter on the Kiwanis Capitol District’s website, the Bristol Virginia-Tennessee Kiwanis Club sponsored the Norton chapter’s formation in January 1921. By the time its charter arrived, the chapter had more than 80 members out of the then-town’s 130 population.

By 1922, the Norton chapter had already opposed publicly the formation of a Ku Klux Klan chapter in the area and began advocating for free mail delivery in the town along with a school library.

“We are no pecterists, looking to the past,” according to an excerpt from the chapter’s 1922 review, “but are imbued with the idea that our history is yet to be made, and that our past efforts are but stepping stones to greater service.”

Norton Kiwanians also worked toward an overpass across the rail line dividing the north and south sides of the town to improve safe access to the town’s elementary and high schools. That became the 11th Street Viaduct, still one of the three major entrances to Norton’s downtown area.

Expanding Norton’s town limits also got the chapter’s attention, according to the history, and chapter members were looking at Norton increasing its population to 5,000 and becoming an independent city.

“The presidents’ list is generational,” Colley said. “You see lots of fathers, sons and family members over the years.”

In 1993, Colley himself began an eight-year run as the chapter secretary after participating in Kiwanis’ high school Key Club and graduating from college. He still works on organizing the annual pancake breakfast. Two members have been in the chapter for 40 or more years each, while Bob Isaac holds the longest term as a member — 60 years.

Norton Kiwanians began work with Kentucky residents to push for a two-state road link at the northern end of Wise County. The road opened in 1927 and is now part of U.S. Route 23. The chapter also advocated for tourism, including development of what would become the High Knob Recreation Area in the abutting Jefferson National Forest.

Norton Kiwanis projects also included free medical care projects for low-income town residents in the 1930s and helping establish a recreation park along Park Avenue that grew to include ball fields and a swimming pool before it closed in the 1970s.

The stone walls and gate to the park still line a two-block stretch of Park Avenue.

Colley said that the Norton chapter also outlasted the Bristol Kiwanis Club, which just re-established itself in 2019.

“It’s becoming harder and harder to get people to join, but we’re probably one of the last Kiwanis Clubs in the area that still holds a weekly lunch meeting. It’s as much about supporting kids as an opportunity to learn about the people in the community.”

KINGSPORT — Yogi and Boo-Boo might not be happy with the Kingsport Sunrise Rotary Club, but Bays Mountain Park officials are delighted.

The club’s members donated $1,295 to the park last week to cover the cost of a bear-proof trash can, which is exactly what park officials listed as a need when the Rotarians asked what they could do to help mark the park’s 50th anniversary.

Megan Krager, senior naturalist, said the new trash can is a type used at a lot of other parks in the region and across the nation.

“They’re very durable,” Krager said. “And they’re very easy to get in and out as far as when we are removing the trash, and so forth. This particular trash can that Rotary has graciously donated the funds for is a double trash can. That’s why it is so expensive. There will be two trash cans inside this metal box. It has two separate lids on it, so the public can use either side. The lids are a bit heavy, but the reason for that is it is bear proof. There’s a little lip on the front that kind of disguises the little handle that your hand slides into.”

Currently, the park has a few of the metal bear-proof trash cans, but it still has multiple wood-enclosed trash cans surrounded by metal mesh.

They haven’t proved to be entirely critter-proof.

“It’s not unusual for raccoons to go looking in those for a tasty treat in the middle of the night and then we come in the next morning with a big mess to clean up,” Krager said. “So not only will it prevent bears from getting into the trash, it will prevent other wildlife as well.”

The new double can will be placed near the main parking area near the park’s Nature Center, Krager said.

The Kingsport Sunrise Rotary Club meets at 7:30 a.m. Wednesday at Food City’s Press Room (the entrance is on Roller Street, at the rear of the store).

Krager said club members will be volunteering in the park on July 10 to work on trail enhancement efforts. 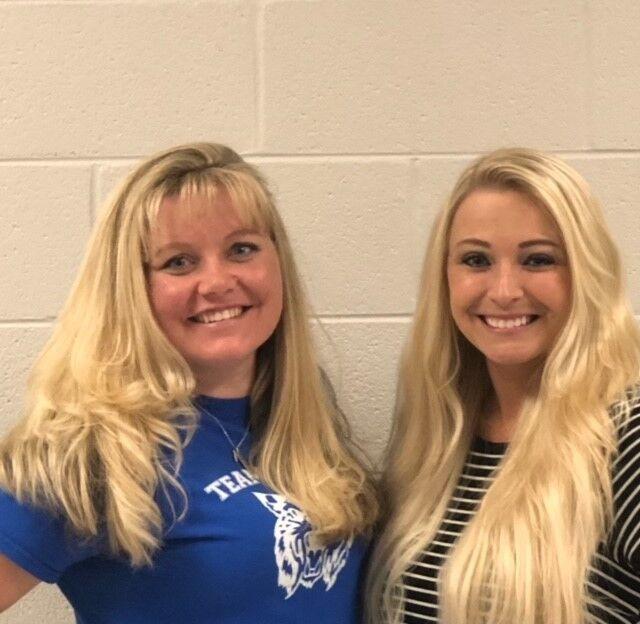