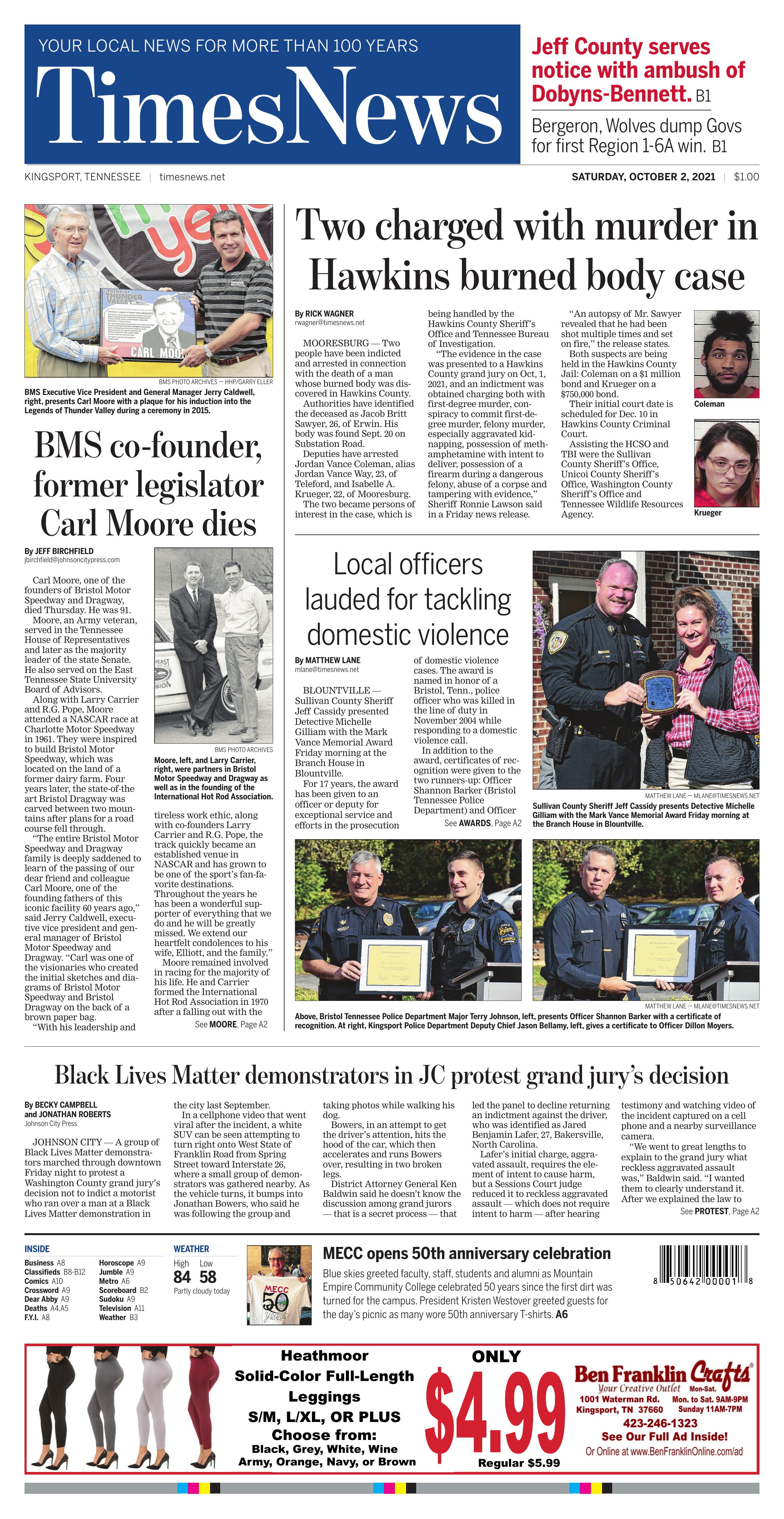 MOORESBURG — Two people have been indicted and arrested in connection with the death of a man whose burned body was discovered in Hawkins County.

Authorities have identified the deceased as Jacob Britt Sawyer, 26, of Erwin. His body was found Sept. 20 on Substation Road.

The two became persons of interest in the case, which is being handled by the Hawkins County Sheriff’s Office and Tennessee Bureau of Investigation.

“The evidence in the case was presented to a Hawkins County grand jury on Oct, 1, 2021, and an indictment was obtained charging both with first-degree murder, conspiracy to commit first-degree murder, felony murder, especially aggravated kidnapping, possession of methamphetamine with intent to deliver, possession of a firearm during a dangerous felony, abuse of a corpse and tampering with evidence,” Sheriff Ronnie Lawson said in a Friday news release.

“An autopsy of Mr. Sawyer revealed that he had been shot multiple times and set on fire,” the release states.

At about 10:30 a.m. Sept. 20, the HCSO received a call about what appeared to be a “burnt human” on Substation Road in Mooresburg.

Both suspects are being held in the Hawkins County Jail: Coleman on a $1 million bond and Krueger on a $750,000 bond.

Their initial court date is scheduled for Dec. 10 in Hawkins County Criminal Court.

This is still an ongoing investigation, no other details or information are available.

For 17 years, the award has been given to an officer or deputy for exceptional service and efforts in the prosecution of domestic violence cases. The award is named in honor of a Bristol, Tenn., police officer who was killed in the line of duty in November 2004 while responding to a domestic violence call.

“These officers every day when they suit up, they don’t know what the day brings,” said District Attorney General Barry Staubus. “Yet they suit up and they go out in this violent world that we live in to try and make the world better.”

The awards are bestowed annually during Domestic Violence Awareness Month.

Branch House is a multi-agency organization that provides a variety of services to victims of interpersonal violence, sexual assault, elder abuse, stalking, human trafficking and to secondary victims of homicide. The organization works with 45 partner agencies throughout the Tri-Cities region.

Demonstrators pose for a photo outside of Johnson City's City Hall building during a march on Friday, Oct. 1, 2021.

The group marches under the I-26 overpass.

By Becky Campbell and JONATHAN ROBERTS

In a cellphone video that went viral after the incident, a white SUV can be seen attempting to turn right onto West State of Franklin Road from Spring Street toward Interstate 26, where a small group of demonstrators was gathered nearby. As the vehicle turns, it bumps into Jonathan Bowers, who said he was following the group and taking photos while walking his dog.

Bowers, in an attempt to get the driver’s attention, hits the hood of the car, which then accelerates and runs Bowers over, resulting in two broken legs.

District Attorney General Ken Baldwin said he doesn’t know the discussion among grand jurors — that is a secret process — that led the panel to decline returning an indictment against the driver, who was identified as Jared Benjamin Lafer, 27, Bakersville, North Carolina.

Lafer’s initial charge, aggravated assault, requires the element of intent to cause harm, but a Sessions Court judge reduced it to reckless aggravated assault — which does not require intent to harm — after hearing testimony and watching video of the incident captured on a cell phone and a nearby surveillance camera.

“We went to great lengths to explain to the grand jury what reckless aggravated assault was,” Baldwin said. “I wanted them to clearly understand it. After we explained the law to them, the evidence was presented and the video was played (and) we took questions.”

The secret discussion among grand jurors led the panel to return a “no true bill” on Monday, which means the case is dead. Baldwin said if additional evidence surfaced, there could be another review, but that’s unlikely at this point. Lafer’s attorney, Mac Meade, continued to maintain that his client was “in the wrong place at the wrong time.”

According to Meade, when Lafer was turning onto State of Franklin from Spring Street, he had to go around a car parked in the right lane and that pedestrians parted, but the victim, Jonathan Bowers, “aggressively” hit the hood of Lafer’s vehicle. Bowers had testified he was simply trying to get Lafer’s attention because he felt himself being pulled under the car.

{p class=”tncms-inline-link”}Meade said that Lafer feared for his family’s safety and that his client believed he ran over a bicycle, not a person, and as soon as he learned what happened, he turned himself in at the Washington County Detention Center. Lafer was taken into custody on Sept. 14, two days after the incident took place.

“He was trying to protect his family,” and didn’t know what might happen as the protesters seemed to surround his vehicle, Meade said.

Demonstrators marched from Founders Park to City Hall chanting “No justice, no peace” and “Black Lives Matter,” among other calls for social justice.

BMS Executive Vice President and General Manager Jerry Caldwell, right, presents Carl Moore with a plaque for his induction into the Legends of Thunder Valley during a ceremony in 2015.

Moore, left, and Larry Carrier, right, were partners in Bristol Motor Speedway and Dragway as well as in the founding of the International Hot Rod Association.

Carl Moore, one of the founders of Bristol Motor Speedway and Dragway, died Thursday. He was 91.

Moore, an Army veteran, served in the Tennessee House of Representatives and later as the majority leader of the state Senate. He also served on the East Tennessee State University Board of Advisors.

Along with Larry Carrier and R.G. Pope, Moore attended a NASCAR race at Charlotte Motor Speedway in 1961. They were inspired to build Bristol Motor Speedway, which was located on the land of a former dairy farm. Four years later, the state-of-the art Bristol Dragway was carved between two mountains after plans for a road course fell through.

“With his leadership and tireless work ethic, along with co-founders Larry Carrier and R.G. Pope, the track quickly became an established venue in NASCAR and has grown to be one of the sport’s fan-favorite destinations. Throughout the years he has been a wonderful supporter of everything that we do and he will be greatly missed. We extend our heartfelt condolences to his wife, Elliott, and the family.”

In a 2005 story on the drag racing website CompetitionPlus.com, Moore recounted their conversation.

“Well, we no longer have the NHRA and now you just threw the AHRA out. What are we going to do?” Moore asked Carrier. “There are no other sanctioning bodies.”

They did just that and the IHRA is in the midst of celebrating its 50th anniversary. It remains a top grassroots Sportsman drag racing organization in North America and, as noted by its “international” name, is a top professional and Sportsman sanctioning body in Australia.

Noted for his decades of service as a local lawmaker, Carl Moore was a strong advocate for Bristol, helping to get its designation as the “Birthplace of Country Music” and instrumental in the revitalization of downtown with the restoration of the Paramount Theatre.

He was married to Elliott G. Moore and was the father of four children. He was preceded in death by his oldest daughter, Janet, and is survived by daughters Cynthia Moore Lotz, Dana Moore, and son Randy as well as grandchildren and several friends.

A private service is scheduled for Emmanuel Episcopal Church in Bristol with post-pandemic Celebrations of Life to be held in Bristol and Nashville. 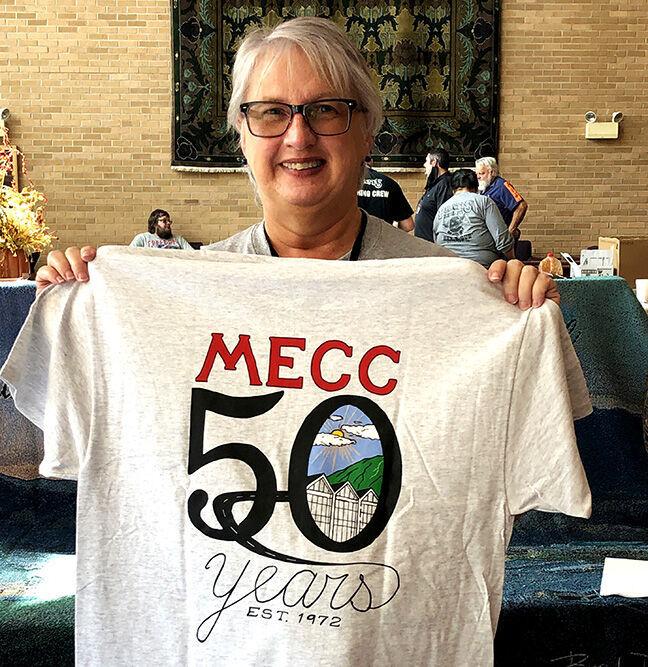