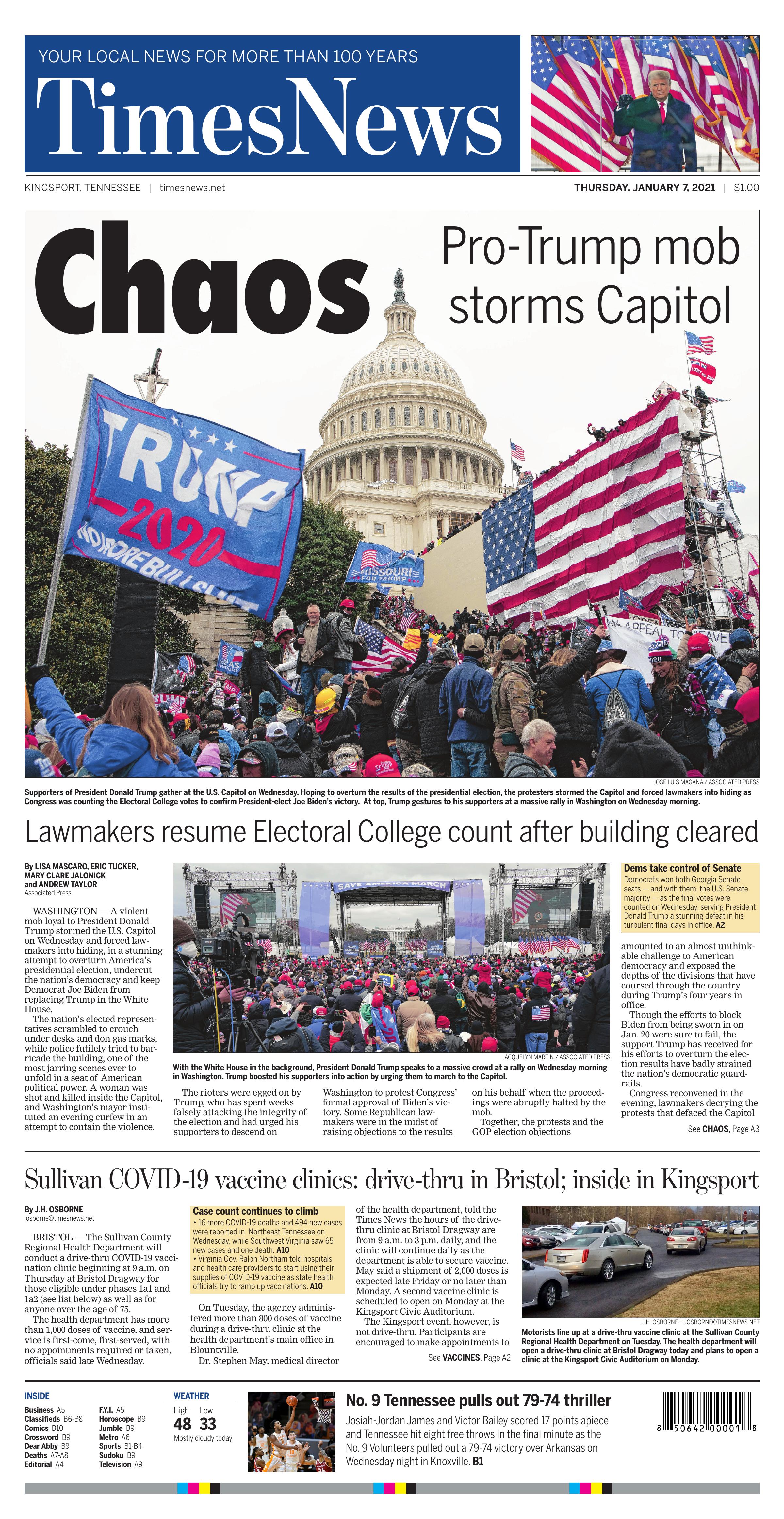 WASHINGTON — A violent mob loyal to President Donald Trump stormed the U.S. Capitol on Wednesday and forced lawmakers into hiding, in a stunning attempt to overturn America’s presidential election, undercut the nation’s democracy and keep Democrat Joe Biden from replacing Trump in the White House.

The nation’s elected representatives scrambled to crouch under desks and don gas masks, while police futilely tried to barricade the building, one of the most jarring scenes ever to unfold in a seat of American political power. A woman was shot and killed inside the Capitol, and Washington’s mayor instituted an evening curfew in an attempt to contain the violence.

The rioters were egged on by Trump, who has spent weeks falsely attacking the integrity of the election and had urged his supporters to descend on Washington to protest Congress’ formal approval of Biden’s victory. Some Republican lawmakers were in the midst of raising objections to the results on his behalf when the proceedings were abruptly halted by the mob.

Together, the protests and the GOP election objections amounted to an almost unthinkable challenge to American democracy and exposed the depths of the divisions that have coursed through the country during Trump’s four years in office.

Though the efforts to block Biden from being sworn in on Jan. 20 were sure to fail, the support Trump has received for his efforts to overturn the election results have badly strained the nation’s democratic guardrails.

Congress reconvened in the evening, lawmakers decrying the protests that defaced the Capitol and vowing to finish confirming the Electoral College vote for Biden’s election, even if it took all night. Lawmakers were still at it after midnight.

Shortly before 11 p.m., senators soundly defeated, by a 93-6 vote, the first objection, to election results from Arizona that had been raised by Sen. Ted Cruz, R-Texas, and Rep. Paul Gosar, R-Ariz.

Vice President Mike Pence, reopening the Senate, directly addressed the demonstrators: “You did not win.”

The president gave his supporters a boost into action Wednesday morning at a rally outside the White House, where he urged them to march to the Capitol. He spent much of the afternoon in his private dining room off the Oval Office watching scenes of the violence on television. At the urging of his staff, he reluctantly issued a pair of tweets and a taped video telling his supporters it was time to “go home in peace” — yet he still said he backed their cause.

A somber President-elect Biden, two weeks away from being inaugurated, said American democracy was “under unprecedented assault, ” a sentiment echoed by many in Congress, including some Republicans. Former President George W. Bush said he watched the events in “disbelief and dismay.”

The domed Capitol building has for centuries been the scene of protests and occasional violence. But Wednesday’s events were particularly astounding both because they unfolded at least initially with the implicit blessing of the president and because of the underlying goal of overturning the results of a free and fair presidential election.

Tensions were already running high when lawmakers gathered early Wednesday afternoon for the constitutionally mandated counting of the Electoral College results, in which Biden defeated Trump, 306-232. Despite pleas from Republican Senate Majority Leader Mitch McConnell, more than 150 GOP lawmakers planned to support objections to some of the results, though lacking evidence of fraud or wrongdoing in the election.

Before the electoral vote count began, Virginia Congressman Morgan Griffith, R-9th, with his face mask hanging from his left ear, questioned the limitation to 11 members of the House and Senate on the House floor for any objection to the state’s votes.

Griffith — ignoring Pelosi’s instructions for senators and representatives to socially distance and wear face masks — asked Vice President Pence how congressmen and senators in the House gallery would be able to object to any electoral vote slates.

Pence told Griffith that he was attempting to debate the counting process, which was not allowed.

Trump spent the lead-up to the proceedings publicly hectoring Pence, who had a largely ceremonial role, to aid the effort to throw out the results. He tweeted: “Do it Mike, this is a time for extreme courage!”

But Pence, in a statement shortly before presiding, defied Trump, saying he could not claim “unilateral authority” to reject the electoral votes that make Biden president.

In the aftermath, several Republicans announced they would drop their objections to the election, including Sen. Kelly Loeffler, R-Ga., who lost her bid for reelection Tuesday.

Earlier, protesters had fought past police and breached the building, shouting and waving Trump and American flags as they marched through the halls. Lawmakers were told to duck under their seats for cover and put on gas masks after tear gas was used in the Capitol Rotunda. Some House lawmakers tweeted they were sheltering in place in their offices.

Rep. Scott Peters, D-Calif., told reporters he was in the House chamber when rioters began storming it. Security officers “made us all get down, you could see that they were fending off some sort of assault.” He said they had a piece of furniture up against the door. “And they had guns pulled,” Peters said.

“And they just told us to take our pins off,” he added, referring to lapel pins members wear so Capitol Police can quickly identify them. Then the lawmakers were evacuated.

Staff members grabbed the boxes of Electoral College votes as the evacuation took place. Other- wise, said Sen. Jeff Merkley, D-Ore., the ballots likely would have been destroyed by protesters.

The woman who was killed was part of a crowd that was breaking down the doors to a barricaded room where armed officers stood on the other side, police said. She was struck in the chest and sent to a hospital, where she was pronounced dead. Officials believe she was struck by law enforcement but were investigating.

Trump supporters posting on internet forums popular with far-right fringe elements celebrated the chaos. Messages posted on one turned from profane frustration over the content of Trump’s speech to glee when supporters stormed the building. At least one leading figure was livestreaming video from inside the Capitol during the siege.

The mob’s storming of Congress prompted outrage, mostly from Democrats but from Republicans as well, as lawmakers accused Trump of fomenting the violence with his relentless falsehoods about election fraud.

Several suggested that Trump be prosecuted for a crime, which seemed unlikely two weeks from when his term expires.

“I think Donald Trump probably should be brought up on treason for something like this,” Rep. Jimmy Gomez, D-Calif., told reporters. “This is how a coup is started. And this is how democracy dies.”

Sen. Ben Sasse, R-Neb., who’s at times clashed with Trump, issued a statement saying, “Lies have consequences. This violence was the inevitable and ugly outcome of the President’s addiction to constantly stoking division.”

Despite Trump’s repeated claims of voter fraud, election officials and his own former attorney general have said there were no problems on a scale that would change the outcome. All the states have certified their results as fair and accurate, by Republican and Democratic officials alike.

The Pentagon said about 1,100 District of Columbia National Guard members were being mobilized to help support law enforcement at the Capitol. More than a dozen people were arrested.

As darkness fell, law enforcement officers worked their way toward the protesters, using percussion grenades to clear the area around the Capitol. Big clouds of tear gas were visible. Police in full riot gear moved down the steps, clashing with demonstrators.

BRISTOL — The Sullivan County Regional Health Department will conduct a drive-thru COVID-19 vaccination clinic beginning at 9 a.m. on Thursday at Bristol Dragway for those eligible under phases 1a1 and 1a2 (see list below) as well as for anyone over the age of 75.

The health department has more than 1,000 doses of vaccine, and service is first-come, first-served, with no appointments required or taken, officials said late Wednesday.

On Tuesday, the agency administered more than 800 doses of vaccine during a drive-thru clinic at the health department’s main office in Blountville.

Dr. Stephen May, medical director of the health department, told the Times News the hours of the drive-thru clinic at Bristol Dragway are from 9 a.m. to 3 p.m. daily, and the clinic will continue daily as the department is able to secure vaccine. May said a shipment of 2,000 doses is expected late Friday or no later than Monday. A second vaccine clinic is scheduled to open on Monday at the Kingsport Civic Auditorium.

The Kingsport event, however, is not drive-thru. Participants are encouraged to make appointments to make it easier to maintain social distancing and other precautions as they come inside for vaccinations.

Sullivan County residents are the primary target for these clinics, as distribution of the vaccine across the state is based on population. But May said no one will be turned away as long as they are eligible either under 1a1 or 1a2, or are age 75 or older.

• Because the daily schedule is subject to change depending on vaccine availability, check the Sullivan County Regional Health Department website, www.sullivanhealth.org, for the latest information.

• All individuals will receive the vaccinations in their vehicles.

• Once individuals are vaccinated, their vehicles will be directed to a waiting area before being released.

• Bring identification of some kind and verification, if you have something (like an employee badge), to show what makes you eligible under phases 1a1 or 1a2. Driver’s licenses are a typical identification used to verify age.

• Expect to wait in line (in your vehicle).

• There are no restrooms available once you enter the line. Plan accordingly.

• Everyone must remain inside their vehicle at all times while in line and during the wait time afterward.

• The health department’s on-hand doses are the Pfizer vaccine, which requires a second booster shot in three weeks (the Moderna vaccine’s second shot is four weeks after the initial shot).

Bristol Motor Speedway & Dragway has committed to making the site available to the health department for up to two months.

“We are proud to partner with the Sullivan County Health Department and open our facility to assist with the COVID-19 vaccination process,” said Jerry Caldwell, executive vice president and general manager, Bristol Motor Speedway & Dragway. “Anytime we are presented with an opportunity to utilize this great facility to support our community, especially an initiative of this magnitude, we are eager to help.”

Tennessee’s Josiah-Jordan James drives in for a layup against Arkansas during a Southeastern Conference game Wednesday in Knoxville.