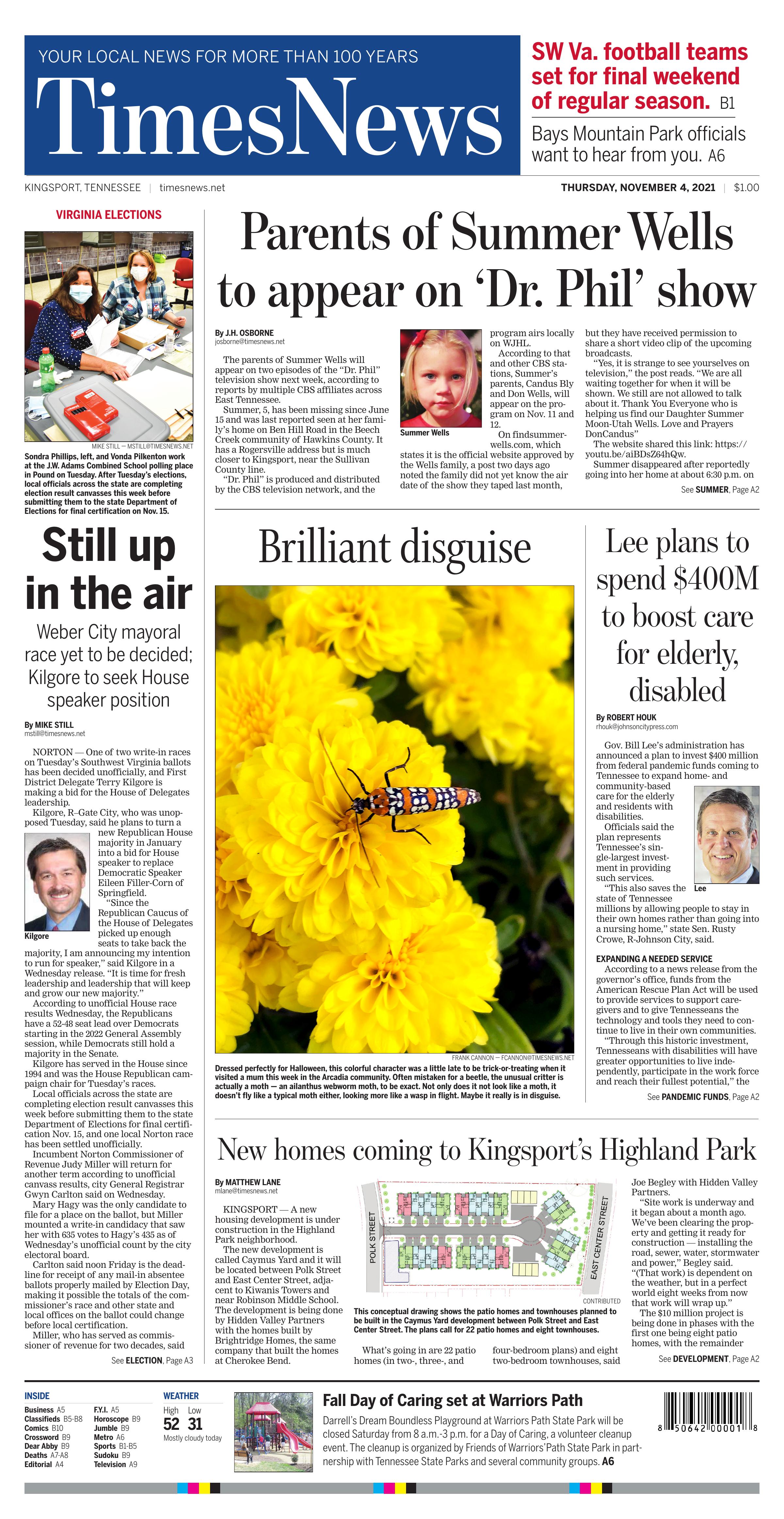 The parents of Summer Wells will appear on two episodes of the “Dr. Phil” television show next week, according to reports by multiple CBS affiliates across East Tennessee.

Summer, 5, has been missing since June 15 and was last reported seen at her family’s home on Ben Hill Road in the Beech Creek community of Hawkins County. It has a Rogersville address but is much closer to Kingsport, near the Sullivan County line.

“Dr. Phil” is produced and distributed by the CBS television network, and the program airs locally on WJHL.

According to that and other CBS stations, Summer’s parents, Candus Bly and Don Wells, will appear on the program on Nov. 11 and 12.

On findsummerwells.com, which states it is the official website approved by the Wells family, a post two days ago noted the family did not yet know the air date of the show they taped last month, but they have received permission to share a short video clip of the upcoming broadcasts.

“Yes, it is strange to see yourselves on television,” the post reads. “We are all waiting together for when it will be shown. We still are not allowed to talk about it. Thank You Everyone who is helping us find our Daughter Summer Moon-Utah Wells. Love and Prayers DonCandus”

Summer disappeared after reportedly going into her home at about 6:30 p.m. on June 15 after helping her grandmother in the garden. A massive search spanning weeks turned up nothing in the rugged area surrounding her home. Her parents have said they believe their daughter was abducted.

Summer is 3 feet tall, weighs 40 pounds, and has blond hair and blue eyes. She was last seen wearing gray pants and a pink shirt and may have been barefoot.

There’s a $58,000 reward for information leading to her whereabouts.

The case was featured on a segment of “In Pursuit with John Walsh” on Sept. 29, apparently with no results.

Investigators are looking for a vehicle reported in the area at the time of Summer’s disappearance, a late 1990s maroon or red Toyota Tacoma with a full bed ladder rack and white buckets in the truck bed.

Anyone who has seen Summer or has information about her whereabouts is asked to call the Hawkins County Sheriff’s Office at (423) 272-7121 or the TBI at 1 (800) TBI-FIND.

This conceptual drawing shows the patio homes and townhouses planned to be built in the Caymus Yard development between Polk Street and East Center Street. The plans call for 22 patio homes and eight townhouses.

KINGSPORT — A new housing development is under construction in the Highland Park neighborhood.

The new development is called Caymus Yard and it will be located between Polk Street and East Center Street, adjacent to Kiwanis Towers and near Robinson Middle School. The development is being done by Hidden Valley Partners with the homes built by Brightridge Homes, the same company that built the homes at Cherokee Bend.

“Site work is underway and it began about a month ago. We’ve been clearing the property and getting it ready for construction — installing the road, sewer, water, stormwater and power,” Begley said. “(That work) is dependent on the weather, but in a perfect world eight weeks from now that work will wrap up.”

The $10 million project is being done in phases with the first one being eight patio homes, with the remainder phased in over the next two years. The homes will start going up in the early spring of 2022 and the first people will move in by late summer, Begley said.

The street for the new neighborhood is called Caymus Court and it will come in off Polk and end in a cul-de-sac near Center. The entire property will also be surrounded by a six-foot aluminum fence, Begley said.

“We’re excited to finally get that piece of property. It’s been vacant forever and we’ve been looking at it for years,” he said. “I think it’s a great location, and hopefully it’ll fit a need in Kingsport for some more patio homes.” 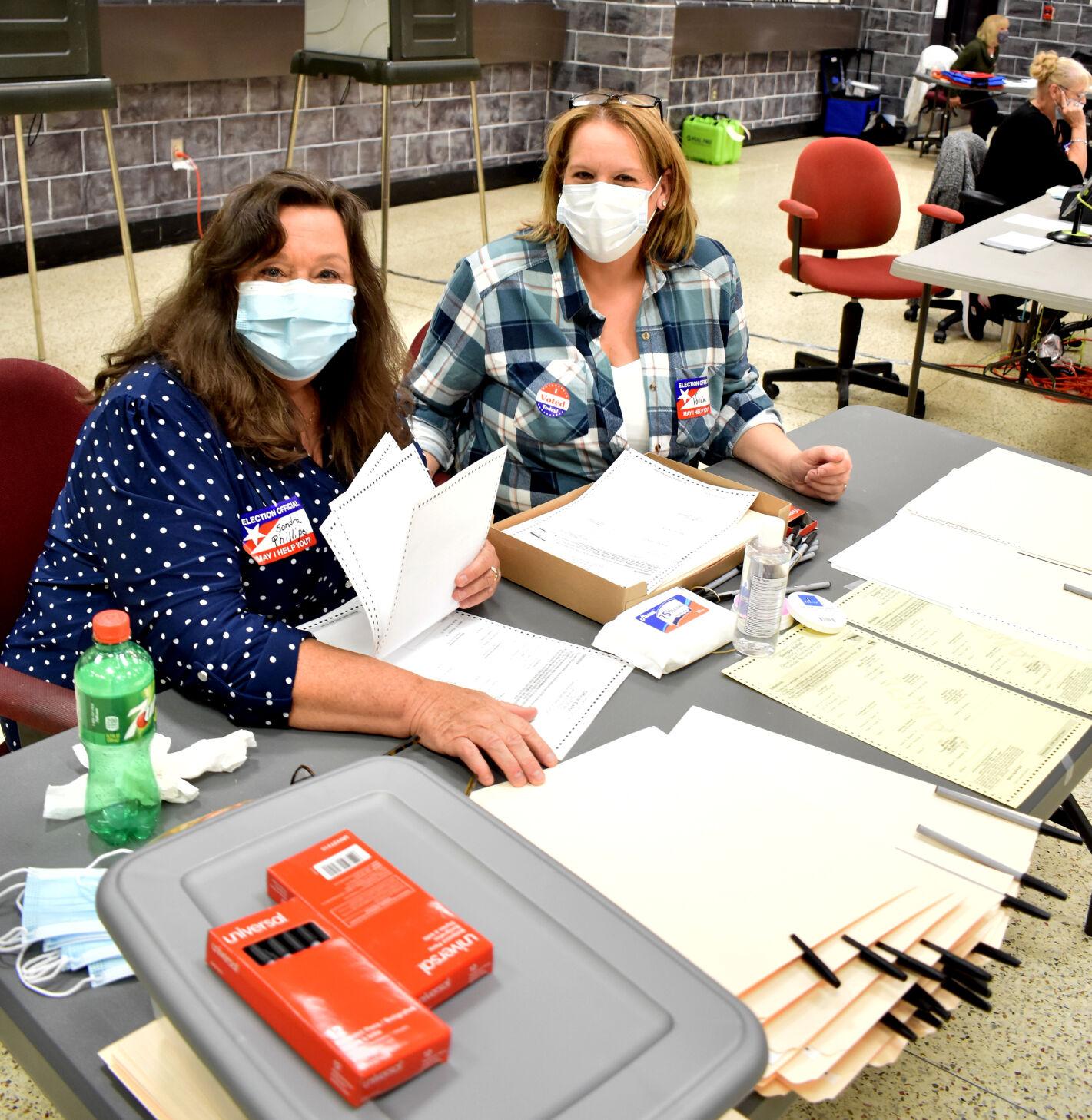 Sondra Phillips, left, and Vonda Pilkenton work at the J.W. Adams Combined School polling place in Pound on Tuesday. After Tuesday’s elections, local officials across the state are completing election result canvasses this week before submitting them to the state Department of Elections for final certification on Nov. 15.

Norton Electoral Board members conduct their post-Election Day vote canvass — a scene repeated across Virginia as local election officials prepare to send results to the state Department of Elections for final certification on Nov. 15.

NORTON — One of two write-in races on Tuesday’s Southwest Virginia ballots has been decided unofficially, and First District Delegate Terry Kilgore is making a bid for the House of Delegates leadership.

Kilgore, R–Gate City, who was unopposed Tuesday, said he plans to turn a new Republican House majority in January into a bid for House speaker to replace Democratic Speaker Eileen Filler-Corn of Springfield.

“Since the Republican Caucus of the House of Delegates picked up enough seats to take back the majority, I am announcing my intention to run for speaker,” said Kilgore in a Wednesday release. “It is time for fresh leadership and leadership that will keep and grow our new majority.”

According to unofficial House race results Wednesday, the Republicans have a 52-48 seat lead over Democrats starting in the 2022 General Assembly session, while Democrats still hold a majority in the Senate.

Kilgore has served in the House since 1994 and was the House Republican campaign chair for Tuesday’s races.

Local officials across the state are completing election result canvasses this week before submitting them to the state Department of Elections for final certification Nov. 15, and one local Norton race has been settled unofficially.

Mary Hagy was the only candidate to file for a place on the ballot, but Miller mounted a write-in candidacy that saw her with 635 votes to Hagy’s 435 as of Wednesday’s unofficial count by the city electoral board.

Carlton said noon Friday is the deadline for receipt of any mail-in absentee ballots properly mailed by Election Day, making it possible the totals of the commissioner’s race and other state and local offices on the ballot could change before local certification.

Miller, who has served as commissioner of revenue for two decades, said Wednesday she had decided to go with her write-in campaign instead of retiring.

“The people of Norton wanted me to run,” said Miller. “I was a little concerned about early voting, but yesterday and during the campaign the response was upbeat and I felt better about it.”

The Times News reached out to Hagy Wednesday for comment.

Scott County General Registrar Mike Edwards said results were not known Wednesday for the Weber City mayoral election, which had no candidates filing for the ballot. Voters cast 152 write-in votes Tuesday with another 33 write-in early votes and three mail-in absentee ballots as of Tuesday.

Voter turnout in Southwest Virginia neared 50%. Edwards said 8,131 of the county’s almost 16,000 eligible registered voters had cast ballots up to Tuesday, with 6,141 voters at the polls on Election Day and 1,990 early in-person and mail-in ballots.

Lee County Registrar Patsy Burchett said 7,266 of 15,225 registered voters had cast ballots through early voting up to Election Day. In Norton, 1,219 of 2,517 city voters headed to the polls early, by mail or on Election Day, Carlton said.

Wise County Registrar Allison Robbins said 10,721 of 24,135 county voters had cast early or Election Day ballots, or 44.1%. That figure was seven percentage points higher than during the 2017 gubernatorial election, she added.

Gov. Bill Lee poses for photos in October with East Tennessee State University student Garrison Buchanan and others after he presented the governor with the state’s latest Employment Task Force Report. Buchanan is a member of the Access ETSU Program.

Gov. Bill Lee’s administration has announced a plan to invest $400 million from federal pandemic funds coming to Tennessee to expand home- and community-based care for the elderly and residents with disabilities.

“This also saves the state of Tennessee millions by allowing people to stay in their own homes rather than going into a nursing home,” state Sen. Rusty Crowe, R-Johnson City, said.

According to a news release from the governor’s office, funds from the American Rescue Plan Act will be used to provide services to support caregivers and to give Tennesseans the technology and tools they need to continue to live in their own communities.

“Through this historic investment, Tennesseans with disabilities will have greater opportunities to live independently, participate in the work force and reach their fullest potential,” the governor said in statement released on Wednesday. “It’s my hope that this enhanced support will shine a light on the important services that caregivers provide and change the lives of Tennesseans across our state.”

The plan is to use the funds to match Medicaid dollars going to a federally approved program developed by TennCare and the state Department of Intellectual and Developmental Disabilities to address in-home and community care.

“Serving more people with intellectual and developmental disabilities to reach their employment, community engagement, and independence goals has been a top priority for both DIDD and TennCare since day one,” Depart- ment of Intellectual and Developmental Disabilities Commissioner Brad Turner said.

Crowe, who chairs the Senate Health and Welfare Committee, said the governor had an opportunity to see the state’s efforts to enhance community- based services for those with disabilities when he toured Core Services of Northeast Tennessee in October.

The Johnson City-based nonprofit organization provides assisted living, employment and nursing services to residents with developmental disabilities in the region.

The state is currently working with Core Services to employ technology to support those with disabilities in reaching their goals of independence.

“I was on site when Gov. Lee visited Core Services,” state Rep. Tim Hicks, R-Gray, told the Press. “To see the work that they are doing to make the lives of individuals who have intellectual disabilities better is amazing. This investment will truly help.”

Erasing A Backlog Of Cases

Crowe said the governor’s plan will provide services to 2,000 individuals with intellectual and developmental disabilities and reduce the waiting list for TennCare’s Employment and Community First CHOICES program.

State Rep. Rebecca Alexander, R-Jonesbor- ough, said she is “thrilled that Gov. Lee has heard the cry for help from families with members who have physical and intellectual disabilities.”

Alexander also noted she is pleased to see the funding could result in the Employment and Community First CHOICES program having “its long waiting list drastically reduced, giving these families the support they desperately need.”

A portion of the $400 million also will be used to invest in the recruitment, training and retention of frontline support staffers to better serve Tennesseans with disabilities.

“These caregivers have very tough jobs,” Crowe said. “Many have left in the past year to take better- paying jobs.” 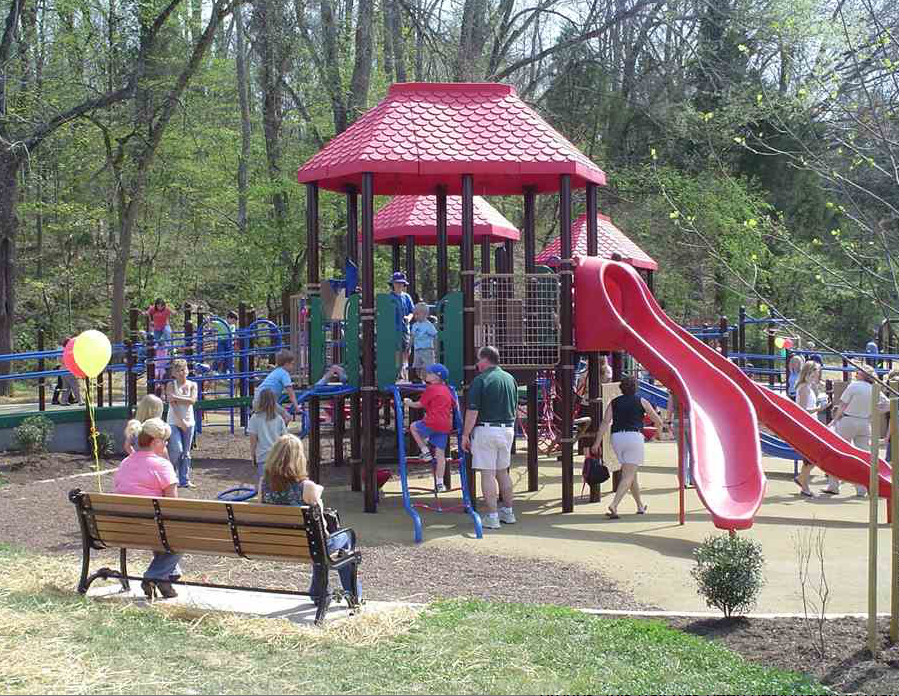