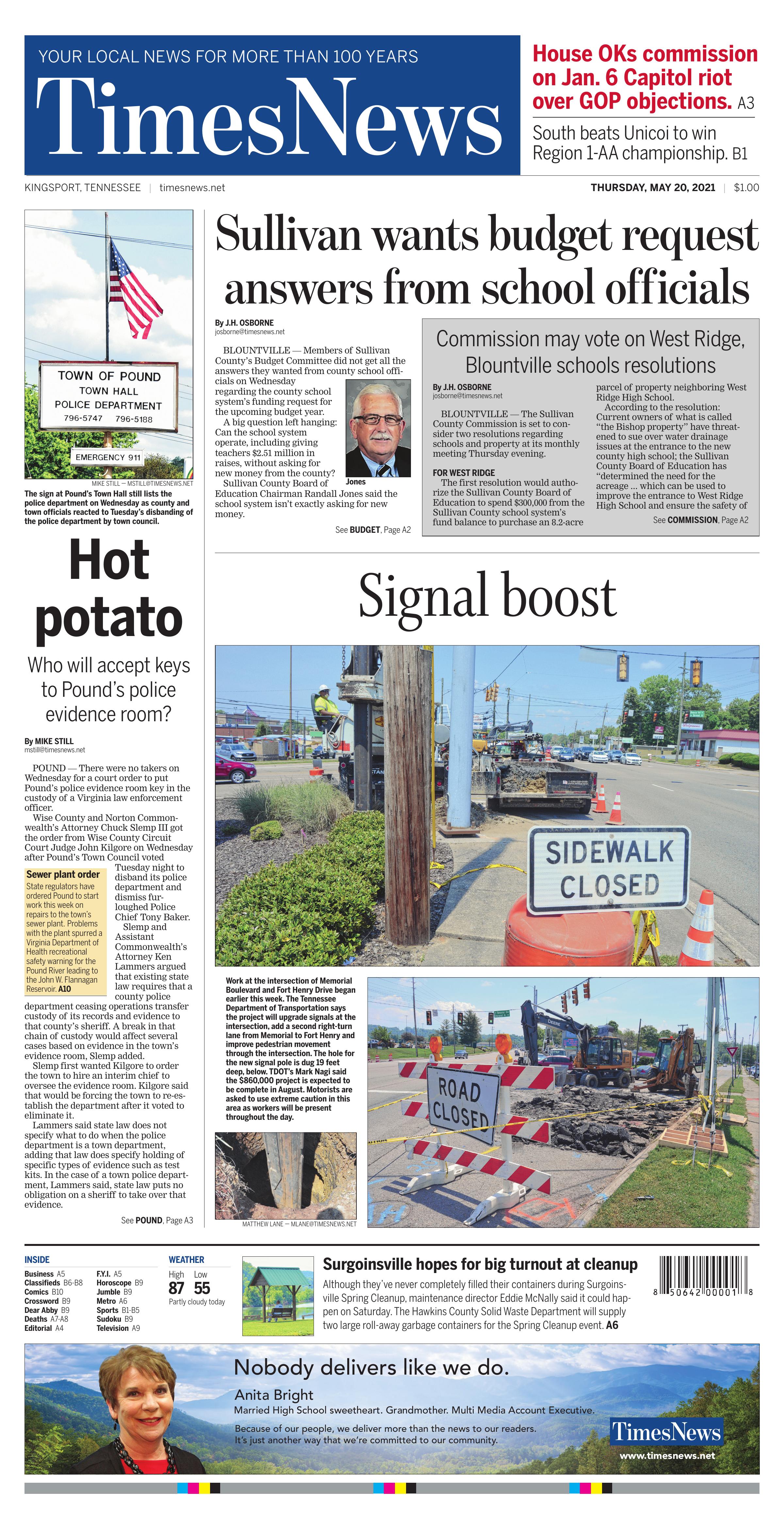 BLOUNTVILLE — Members of Sullivan County’s Budget Committee did not get all the answers they wanted from county school officials on Wednesday regarding the county school system’s funding request for the upcoming budget year.

A big question left hanging: Can the school system operate, including giving teachers $2.51 million in raises, without asking for new money from the county?

At, or at least near, the heart of that debate is the county’s earlier message to the school system that the county budget will be developed based on funding the county school system with the same total local revenue as this year.

A sticking point: The county plans to decrease the portion of the school system’s revenue that comes from the county property tax and replace it with growth in sales tax revenues, which are up considerably this year.

Jones touched on that move several times when asked about the system’s need for more money, calling it a “scary proposition” that he worries will leave the school system short on money if sales taxes don’t come in as projected.

The county’s budget office sent a letter to school officials last Friday with a specific list of what budget committee members wanted explained in more detail. School officials responded with a packet of information Wednesday that provided more details, but not everything the committee had asked to see.

Ultimately, Commissioner Darlene Calton made a motion to ask the school officials to come back at a future date with comprehensive information on how much the school system expects to save due to the closure of multiple schools. The motion was approved by the budget committee.

Afterward, Commissioner Dwight King said he can’t accept the current school budget request, and he made a motion for the committee to ask school officials to go back to the drawing board and come back with a budget with a total close to what the system had this year.

The school system is seeking to increase its total budget by nearly $4.35 million, to $89.96 million. To balance that budget, the system’s budget request estimates use of $8.8 million of the system’s fund balance, which totals about $18.9 million.

The school system’s budget request includes an estimate it would end the upcoming year by returning $1.1 million to fund balance.

Documents based on state audits from the past 10 years, and distributed to budget committee members on Wednesday by county budget office staff, show that would be a drastic reversal and the lowest end-of-year addition to the fund balance since 2013.

According to the documents, the school system’s annual budgets have typically ended with millions of dollars left unspent, due to a combination of revenues in excess of projections and spending less than budgeted.

A look at unspent appropriations shows significantly higher dollar amounts and a steady climb for the past six years.

Unspent appropriations (money budgeted, but not spent) totaled about $6.42 million for the fiscal year that ended June 30, 2020, according to the documents based on state audits. For that 12-month budget cycle, the school system’s approved 2019-2020 general purpose school fund was $84,301,098.

The $6.42 million is what was budgeted, but not used. State auditors call it a variance.

The single biggest chunk of that unspent $6.42 million came from funding budgeted for instruction.

According to the audit, the variance there last year totaled about $2.84 million.

School officials have said using $8.8 million of the system’s fund balance to balance the upcoming budget will drop the available fund balance below a state required minimum, and possibly leave the system without enough money to operate if sales taxes don’t come in as high as projected.

Some budget committee members, and other county officials involved in the budget development process, point to the documented trend of excess revenue and unspent appropriations — totaling millions in recent years — in questioning that fear.

A time for the next budget committee meeting will be announced by the office of Sullivan County Mayor Richard Venable.

POUND — There were no takers on Wednesday for a court order to put Pound’s police evidence room key in the custody of a Virginia law enforcement officer.

Slemp and Assistant Commonwealth’s Attorney Ken Lammers argued that existing state law requires that a county police department ceasing operations transfer custody of its records and evidence to that county’s sheriff. A break in that chain of custody would affect several cases based on evidence in the town’s evidence room, Slemp added.

Slemp first wanted Kilgore to order the town to hire an interim chief to oversee the evidence room. Kilgore said that would be forcing the town to re-establish the department after it voted to eliminate it.

“Why isn’t the sheriff holding the key?” Kilgore asked.

“The sheriff doesn’t want it,” Slemp said, adding that Sheriff Grant Kilgore told him that he does not have the resources to review and inventory the room’s contents and records. Having the key in a law enforcement department’s custody is critical to preserving chain of custody, he added.

Slemp said Virginia State Police First Sgt. Geoff Lewis with the VSP investigative office in Lebanon told him that he was not sure he could take custody of the records and evidence.

“You’ve already had a lapse in time,” Kilgore said. “The status quo is history. The window is broken.”

Town Attorney Charles Wright said the town still has a 60-day policing agreement in place with the county after it furloughed Baker and part-time officer Tim McAfee in April. County Attorney Karen Mullins said the agreement only covers policing in the town and not handling of the town evidence and records room.

That did not happen.

Baker, who was not present at Wednesday’s hearing, still held the department’s evidence room keys and waited at Pound Town Hall from 4:00 p.m. to 4:45 p.m. with Wright and Town Manager Drew Mullins. Wright searched by phone for a police department willing to collect the keys from Baker, but the Wise and St. Paul police departments refused.

Baker told Mullins that he wanted to see the evidence preserved so victims in those cases would see justice.

Before leaving the town hall parking lot, Baker said he would return with the key if told a department would accept it.

Slemp said at about 6 p.m. that officials were still looking for an officer or agency willing to take the key.

Local-news
featured
Use of Blountville schools site for "community services" up for potential vote by Sullivan Commission
J.H. OSBORNE — josborne@timesnews.net

The Sullivan County Commission may vote on a resolution tonight to secure Blountville Elementary and Blountville Middle schools for community use. The two schools, which share a campus, are closing for good at the end of the current school year.

BLOUNTVILLE — The Sullivan County Commission is set to consider two resolutions regarding schools and property at its monthly meeting Thursday evening.

According to the resolution: Current owners of what is called “the Bishop property” have threatened to sue over water drainage issues at the entrance to the new county high school; the Sullivan County Board of Education has “determined the need for the acreage ... which can be used to improve the entrance to West Ridge High School and ensure the safety of students and faculty;” and the BOE approved the purchase of the property on May 4.

Although this is the resolution’s first consideration during a commission meeting, a vote appears likely. Its sponsors have requested a waiver of the rules. That’s a step required for a vote on first consideration. To gain approval, resolutions voted on under a waiver of the rules require a two-thirds majority voting “yes.” That’s 16 out of 24 commissioners. Nine commissioners have indicated support for the resolution by signing on as sponsors. They include: Judy Blalock (primary sponsor), Todd Broughton, Terry Harkleroad, Sam Jones, Darlene Calton, Randy Morrell, Mark Vance, Hunter Locke and John Gardner.

The second resolution seeks “to secure Blountville Elementary and Blountville Middle schools for community use.”

The two schools, which share a campus, will close for good at the end of the current school year.

The resolution, sponsored by the three commissioners who represent the district, which includes Blountville — Joyce Crosswhite, Tony Leonard, and Michael Cole, states that the county “has an opportunity to secure use of the property and provide community services.”

The resolution further states the county “has a further interest in maintaining the integrity of the neighborhoods surrounding the schools.”

It calls on the commission to secure the use of the grounds and buildings “for the enjoyment and interests of the citizenry of Sullivan County while continuing to support the heritage of the Blountville community as the county seat.”

If approved as drafted, the resolution would require County Attorney Dan Street to “research and establish borders and boundaries to said property.”

The Sullivan County Commission is scheduled to meet at 6 p.m. on the second floor of the historic Sullivan County Courthouse. Public comment is heard shortly after the meeting begins, prior to discussion or votes on any of resolutions.

KINGSPORT — Work at the intersection of Memorial Boulevard and Fort Henry Drive began earlier this week. 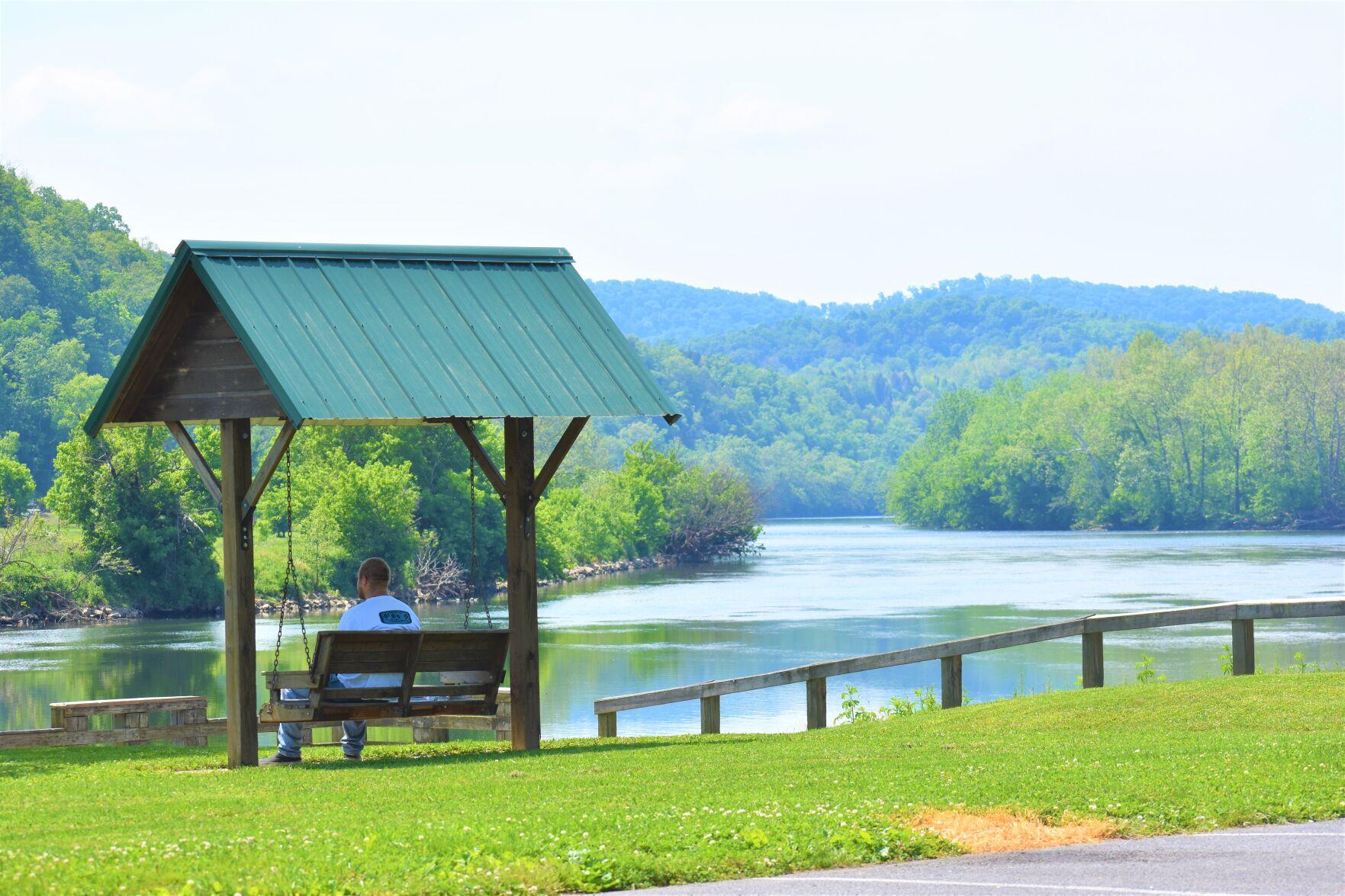 Surgoinsville scenery. This gentleman enjoys a scenic view of the Holston River from a swinging bench at the Surgoinsville Riverfront Park Wednesday morning.