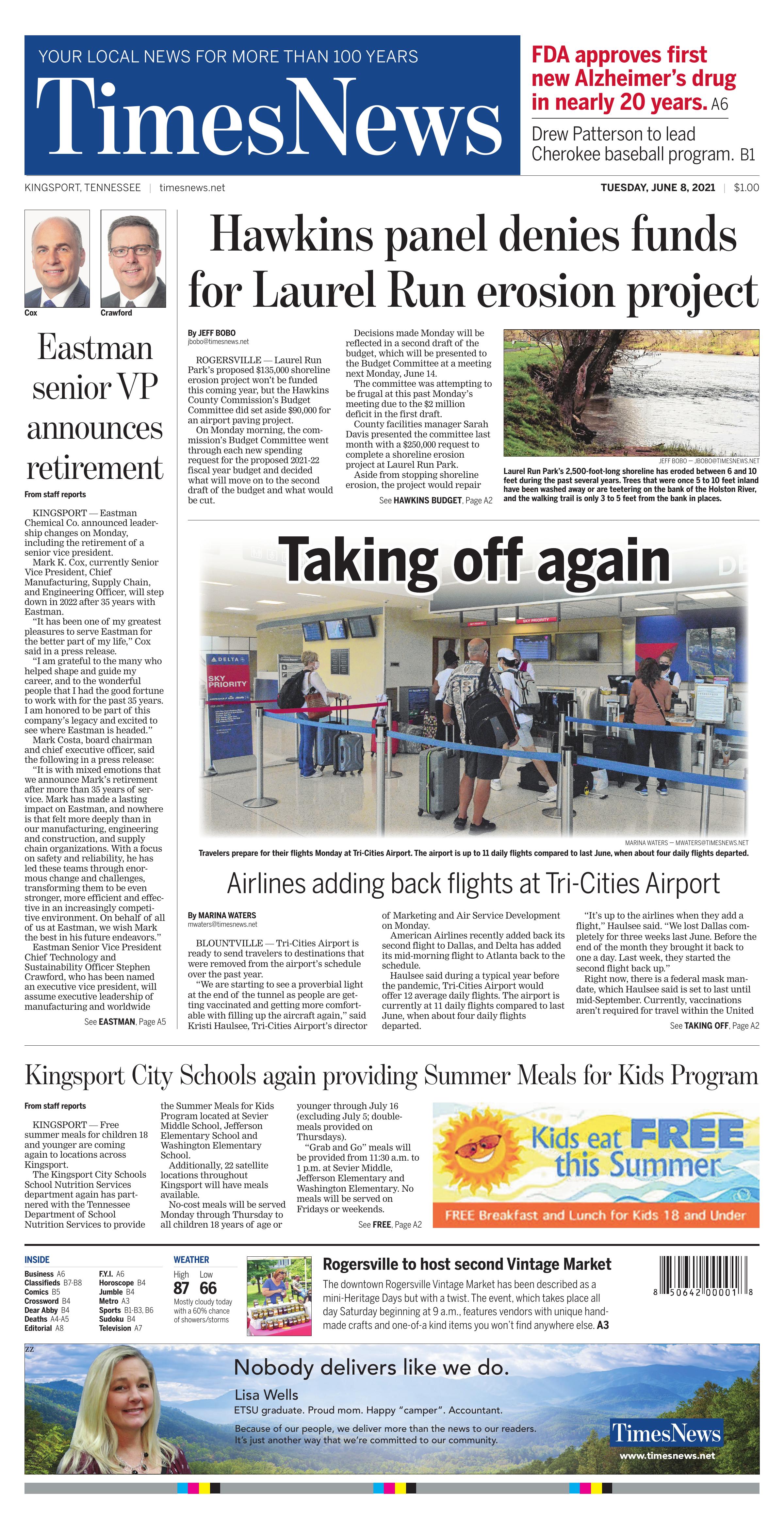 Laurel Run Park’s 2,500-foot-long shoreline has eroded between 6 and 10 feet during the past several years. Trees that were once 5 to 10 feet inland have been washed away or are teetering on the bank of the Holston River, and the walking trail is only 3 to 5 feet from the bank in places.

Erosion on the Laurel Run hiking trail has been an ongoing issue, but the flood in March washed out a deep trench. County parks employee Robert Carpenter stands in the newly created trail erosion.

Photos of flooding this past March at Laurel Run Park. In March the Hawkins County Commission's Parks Committee voted to forward a recommendation to the Budget Committee that it fund approximately $225,000 work of repairs in the park, which includes erosion protection for a bridge, hiking trail, and creek shoreline repairs. That plan, now a $250,000 request, was presented to the Budget Committee on May 26.

On Monday morning, the commission’s Budget Committee went through each new spending request for the proposed 2021-22 fiscal year budget and decided what will move on to the second draft of the budget and what would be cut.

Decisions made Monday will be reflected in a second draft of the budget, which will be presented to the Budget Committee at a meeting next Monday, June 14.

The committee was attempting to be frugal at this past Monday’s meeting due to the $2 million deficit in the first draft. 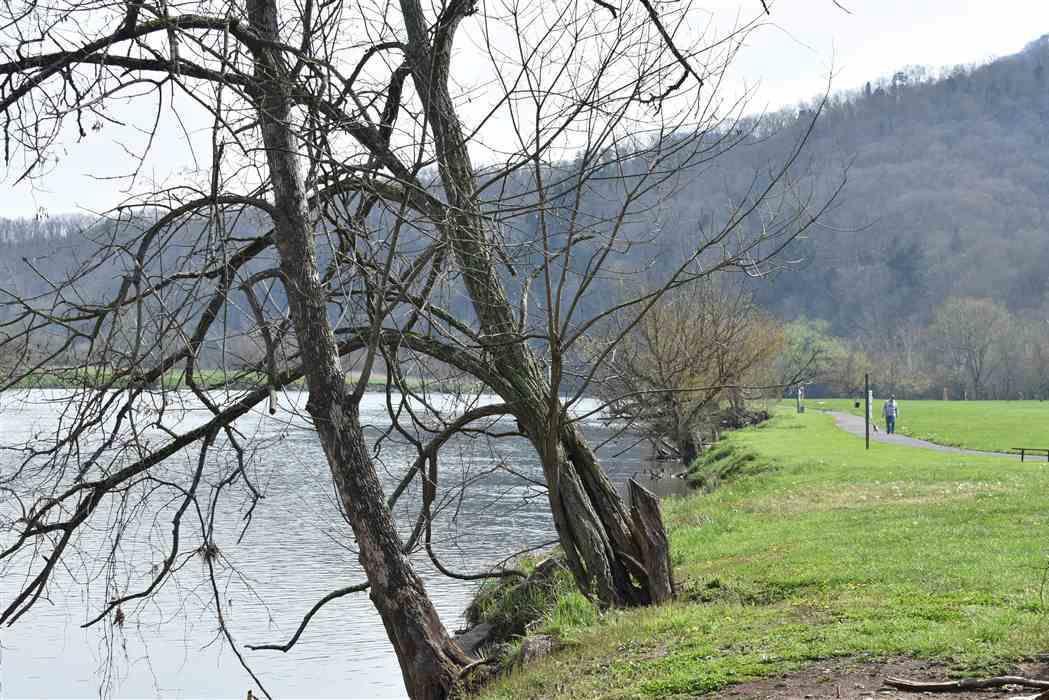 Aside from stopping shoreline erosion, the project would repair and improve drainage on the park’s hiking trail to the water fall, and build three new bridges over the creek.

Budget Committee Chairman Mike Herrell expressed opposition to the expenditure last month because there’s no guarantee the park will be protected from erosion in the event of a major flood.

About half the park’s Holston River Shoreline was repaired over the past two years. US Department of Agriculture engineer Daniel Horne, who completed the engineering plans for the project at no cost to the county, estimated the cost of completing the river shoreline project at $133,000 to $135,000.

Davis told the committee there’s not a 100% guarantee the erosion project will stop the Holston River from taking the park. Without the project, however, there’s a 100% guarantee that the river will continue to take the park, Davis noted.

The county’s permit to repair the shoreline expires in December 2022.

“We can’t dig into fund balance for every project that exists, just simply because that fund balance is healthy,” Jason Roach said. “I remember a time … we were trying to dig out of a hole we didn’t have reserves to spend. We have somewhat of a healthy fund balance right now. I’m not going to be in favor of pulling funding every time we just want to do a project unless we find new sources of revenue.

On Monday, Budget Committee member Jeff Barrett, who chairs the commission’s Parks Committee, made a motion to add $135,000 in the budget to complete the shoreline erosion project. Barrett’s motion failed, however, by a vote of 4-1 with Herrell, Roach, Hannah Speaks, and Raymond Jessee opposed.

The airport runway was repaired in recent years to eliminate a line of site issue from one end to the other. Davis noted that the apron that planes use to travel to and from the runway is now being reported out of compliance by inspectors.

Davis said there’s a possibility that the county will receive a 100% grant for the project, but a 5% match must already be in the budget in order to apply for the grant.

The committee agreed to transfer $25,000 that was already in the airport budget under the “Other Capital Outlay” line item toward matching funds.

As a result, the committee agreed to allocate the remaining needed $90,000 in new spending toward the grant matching funds.

Several county fire departments made funding increase requests in the 2021-22 budget, including the VFDs from Carters Valley, Goshen Valley, Persia and Stanley Valley, which each asked for an additional $30,890, from $19,110 to $50,000.

The Budget Committee approved Speaks’ motion to increase all eight county departments to $30,000.

The Mount Carmel, Church Hill and Rogersville fire departments had requested a $2,850 increase, while Surgoinsville had no additional request. The committee agreed to grant all four municipal departments an additional $2,850.

Barrett told the committee that after CHRS Capt. Tim Coup made his request to the committee last month a primary rescue truck blew a motor. Barrett made a motion to give the CHRS an additional $45,000 for a new truck, but that motion failed for lack of a second.

Speaks made a motion to give each rescue squad $50,000, which was approved.

Mayor Jim Lee requested $33,600 to replace a computer server and software dating back to 2007 for the county mayor’s office. Jessee made a motion to include the request in the second draft of the budget, but it failed for a lack of a second.

The committee took no action on a request for $60,000 for additional security equipment and three deputies for courtroom security, pending completion of a HCSO study on the Church Hill city/county building and a Personnel Committee recommendation on the new deputy positions.

The committee referred a County Clerk request for a new deputy clerk position to man the driver’s license renewal station to the Personnel Committee.

No action was taken on the sheriff’s request for a $10,000 vehicle for inmate work crew transport. The committee recommended that the sheriff make the purchase with funds already in his budget.

The committee stated that nonprofit organizations that haven’t turned in their requests must have them submitted by the time the second draft comes up for consideration next Monday or they risk being automatically rejected. Among the agencies named Monday were Helping Hands and the VFDs from Clinch, Bulls Gap and Striggersville.

A new $27,814 request from the Greater Kingsport Family YMCA for an afterschool program at several county schools was put on hold pending a representative coming before the committee to explain the request.

A $5,400 increase for the Church Hill Senior Center was denied.

BLOUNTVILLE — Tri-Cities Airport is ready to send travelers to destinations that were removed from the airport’s schedule over the past year.

“We are starting to see a proverbial light at the end of the tunnel as people are getting vaccinated and getting more comfortable with filling up the aircraft again,” said Kristi Haulsee, Tri-Cities Airport’s director of Marketing and Air Service Development on Monday.

American Airlines recently added back its second flight to Dallas, and Delta has added its mid-morning flight to Atlanta back to the schedule.

Haulsee said during a typical year before the pandemic, Tri-Cities Airport would offer 12 average daily flights. The airport is currently at 11 daily flights compared to last June, when about four daily flights departed.

“It’s up to the airlines when they add a flight,” Haulsee said. “We lost Dallas completely for three weeks last June. Before the end of the month they brought it back to one a day. Last week, they started the second flight back up.”

Right now, there is a federal mask mandate, which Haulsee said is set to last until mid-September. Currently, vaccinations aren’t required for travel within the United States, but Haulsee said those looking to travel need to do their research and see what is required on the other end of their flight.

“There may be some quarantining areas,” Haulsee said. “You may have to have a negative COVID-19 test 24 hours before departure. It just depends on where you’re going.”

Sarah Dixon readied to board an Atlanta-bound plane on Monday along with her grandfather, Sam Moser. The vaccine has eased her fears about traveling during the pandemic.

“It seemed kind of reckless to just fly before,” Dixon said. “This is my first time flying (since the pandemic). But I’m not worried. I’m vaccinated.”

Haulsee said the airport started seeing an increase in travel around March. Business and some international travel have increased, she said, but mostly, leisure travel has been at the top of the list in the Tri-Cities.

“Even here in our area, we have seen more people coming in because they are going to places they can disperse a little bit more,” Haulsee said. “Folks are headed to beaches, the mountains. Those are the two big spots where they can be outdoors and away from people. We thought that would slow down but it hasn’t yet.”

For those looking to travel, Haulsee suggested bringing a face covering and adding your airline’s app to your smartphone to stay more hands-off.

“They generally now will have you scan your own ticket so you don’t have to touch anything, and going through security, it’s the same thing,” Haulsee said. “The less they have to touch things, the safer it is for everybody.”

Haulsee says vaccines seem to have made travelers more comfortable at the airport.

KINGSPORT — Free summer meals for children 18 and younger are coming again to locations across Kingsport.

Additionally, 22 satellite locations throughout Kingsport will have meals available.

No-cost meals will be served Monday through Thursday to all children 18 years of age or younger through July 16 (excluding July 5; double- meals provided on Thursdays).

The summer meal program has no income requirements. For more information on the Summer Meals for Kids program, contact Andria Ball, school nutrition services office assistant at (423) 378-2113 or visit www.k12k.com.

The 2020 Seamless Summer Food Service program is administered by the Tennessee Department of School Nutrition Services under an agreement with the U.S. Department of Agriculture.

“It has been one of my greatest pleasures to serve Eastman for the better part of my life,” Cox said in a press release.

“I am grateful to the many who helped shape and guide my career, and to the wonderful people that I had the good fortune to work with for the past 35 years. I am honored to be part of this company’s legacy and excited to see where Eastman is headed.”

Mark Costa, board chairman and chief executive officer, said the following in a press release:

“It is with mixed emotions that we announce Mark’s retirement after more than 35 years of service. Mark has made a lasting impact on Eastman, and nowhere is that felt more deeply than in our manufacturing, engineering and construction, and supply chain organizations. With a focus on safety and reliability, he has led these teams through enormous change and challenges, transforming them to be even stronger, more efficient and effective in an increasingly competitive environment. On behalf of all of us at Eastman, we wish Mark the best in his future endeavors.”

Eastman Senior Vice President Chief Technology and Sustainability Officer Stephen Crawford, who has been named an executive vice president, will assume executive leadership of manufacturing and worldwide engineering and construction.

That wasn’t the only change Eastman announced on Monday.

“I am very excited to welcome both Julie and Chris to the executive team,” Costa said in a release.

“Together they bring decades of experience and diverse perspectives to our executive leadership,” Costa said. ‘“Both are well respected for their pragmatic leadership and for their dedication to transforming Eastman into a leading material innovation company.” 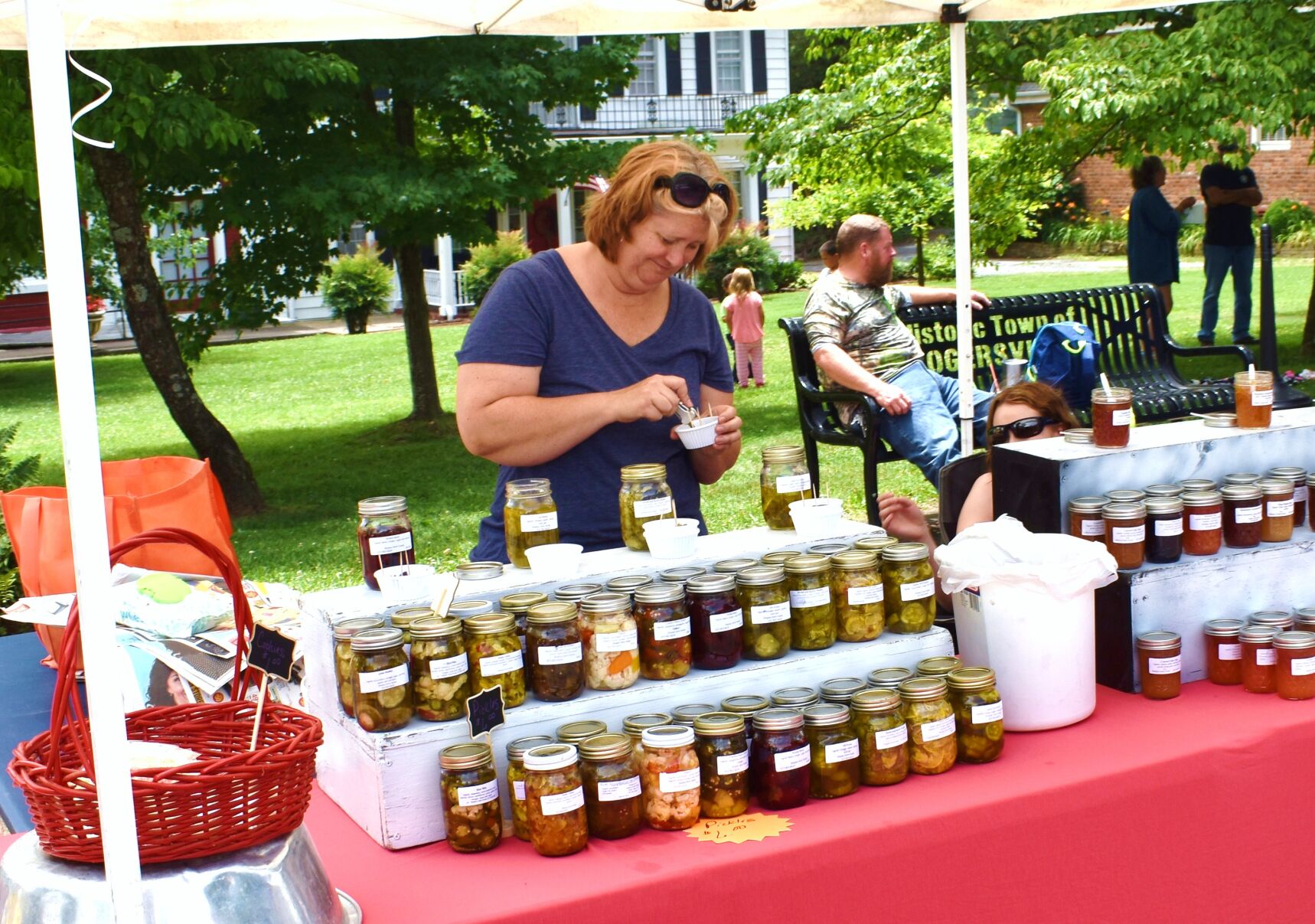 Originally scheduled for April, and then postponed again in May, the inaugural Rogersville Vintage Market finally arrived downtown Saturday with dozens of craft and “vintage” vendors lining historic Main Street.