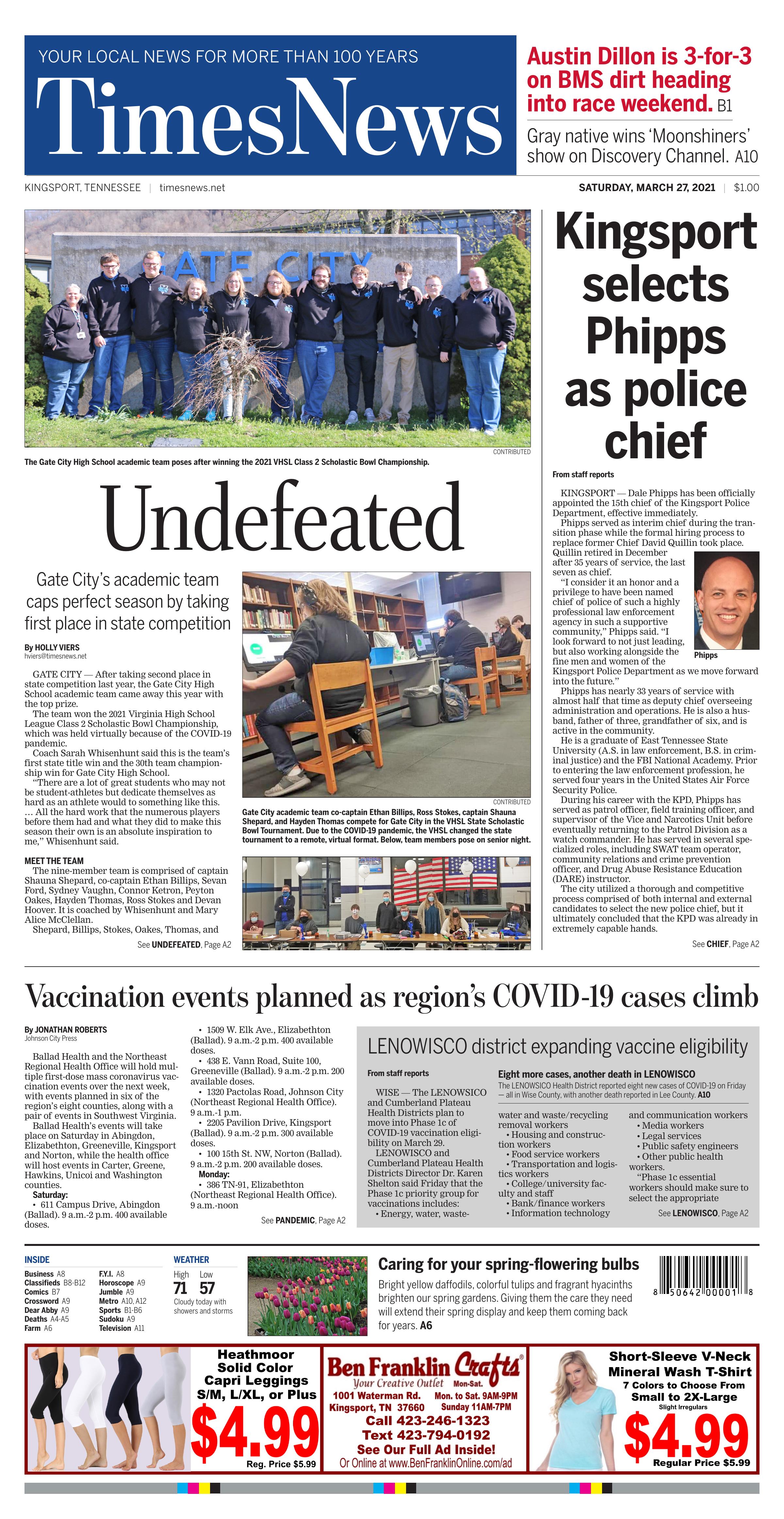 Ballad Health and the Northeast Regional Health Office will hold multiple first-dose mass coronavirus vaccination events over the next week, with events planned in six of the region’s eight counties, along with a pair of events in Southwest Virginia.

Ballad Health’s events will take place on Saturday in Abingdon, Elizabethton, Greeneville, Kingsport and Norton, while the health office will host events in Carter, Greene, Hawkins, Unicoi and Washington counties.

Ballad’s vaccination sites will be open from 9 a.m. to 2 p.m., and appointments are not required. The Northeast Regional Health Office events in Carter and Hawkins counties do not require appointments. For the events in Greene, Unicoi and Washington counties, you can book an appointment at vaccinate.tn.gov.

Both the Ballad and Northeast Regional Health Office events will use the two-dose Pfizer-BioNTech vaccine.

“As vaccine supply becomes more abundant, we’re taking steps to make the vaccine more available and accessible,” Ballad Chief Infection Prevention Officer Jamie Swift said in a press release. “We have typically done vaccine appointments from Monday through Friday at our CVCs, but our Super Saturday event will allow us to better meet the needs of even more community members.”

There were 170 new reported COVID-19 infections in the region’s eight counties on Friday, the most since 219 were reported on Feb. 11. The gain brought Northeast Tennessee’s seven-day new case average to 113, the highest since Feb. 17.

As of Friday, the region had 1,150 active infections, with seven of the region’s eight counties reporting an increase in active cases. Sullivan (37) and Washington (25) counties combined for more than half of the increase, while Carter (15), Greene (10) and Hawkins (11) counties also saw double-digit increases in active infections.

Where Can I Get Vaccinated?

Not sure if you're eligible? Tennesseans can determine their vaccine eligibility and request an appointment by visiting bit.ly/2YcVMcT and highlighting their county of residence. Additionally, you can call (866) 442-5301 for more information.

The Sullivan County Regional Health Department is vaccinating people at Whitetop Creek Park and the Kingsport Civic Auditorium by appointment only. Call (423) 279-2777 to schedule an appointment and check bit.ly/3a6ZVoc for the latest information and to pre-download and fill out the vaccine paperwork.

Where Can I Get Tested?

Note: COVID-19 self-tests will be offered to adults on Mondays, Wednesdays and Fridays. Individuals will remain in their vehicles while completing paperwork and collecting their samples. Health departments will submit the samples for testing.

Children and adults unable to register online can still receive the standard nasal swab COVID-19 tests on Tuesdays and Thursdays.

WISE — The LENOWSICO and Cumberland Plateau Health Districts plan to move into Phase 1c of COVID-19 vaccination eligibility on March 29.

“Phase 1c essential workers should make sure to select the appropriate essential worker category when signing up online so they are contacted for an appointment,” said Shelton. “We will continue to offer appointments to eligible individuals in Phase 1a and Phase 1b who have not yet been vaccinated.”

Anyone who is 65 years and older, who pre-registered prior to March 1 and still needs an appointment, is encouraged to email prepmodsupport@vdh.virginia.gov, or contact a community vaccine partner provider directly for an appointment. A list of community partner providers can be found on the districts’ website pages and social media sites (below).

Those with specific medical concerns or conditions should discuss the COVID-19 vaccine with their provider.

Team members pose on senior night. Before the district, region and state tournaments, the team was able to compete in person, with social distancing and cleaning measures in place.

The team won the 2021 Virginia High School League Class 2 Scholastic Bowl Championship, which was held virtually because of the COVID-19 pandemic.

“There are a lot of great students who may not be student-athletes but dedicate themselves as hard as an athlete would to something like this. … All the hard work that the numerous players before them had and what they did to make this season their own is an absolute inspiration to me,” Whisenhunt said.

Shepard, Billips, Stokes, Oakes, Thomas, and Hoover are seniors; Vaughn is a junior; and Ketron and Ford are freshmen.

Eight of the nine were returning members from last year.

Like most other aspects of life, the COVID-19 pandemic also forced changes to the academic team’s competitions, Whisenhunt said.

“Even in our regular- season, we were able to play our district regular season in person, but we had to move it from the library to the cafeteria for social distancing,” Whisenhunt said. “We had to follow cleaning measures and sanitization, and players had to wear masks at all times. We did our district tournament, our region tournament and the state tournament virtually.”

McClellan added that the team usually plays each of its regular season district opponents twice, but because of the pandemic, they only played each team once this year.

“Our VHSL season traditionally runs from October through the end of February,” Whisenhunt said. “So we usually start practicing right around Labor Day, but this year we didn’t start practicing until Oct. 1 officially, and our first match was Dec. 15.”

Whisenhunt said the team repeated as regular- season district champions this year, with an undefeated record in the regular season. The team won the district tournament for the second time and advanced to the Region 2D tournament, which they also won.

“Only the champion of the region advanced to state, which is unfortunate because our region is very competitive,” Whisenhunt said. “We are back-to-back-to-back Region 2D champions, so our state competition was the top team from each of the four regions — A, B, C and D — and we played in a round-robin format as opposed to double elimination. We played every team once, and we had the best record. We were undefeated, and we had the highest total points in our classification, so we were champions.”

A few hours after the win, school leadership organized a community parade for the team.

The team also received medals and a trophy during a Friday morning ceremony at the school.The ceremony can be viewed at https://www.nfhsnetwork.com/events/gate-city-high-school-gate-city-va/evtc2dd123745.

Despite the changes and difficulties the players were faced with this year, both coaches agree that the team’s victory was a well-deserved accomplishment.

“It has been a challenging year to say the least, but they played like Gate City,” McClellan said. “They’re a family, and they’re bound together by the desire to succeed, and they did.”

Shepard: “I’ve actually been lucky enough to go to state all three years that I’ve been on the team, and it’s been nice because we’ve progressed over time. We got third my first year and runner-up last year, and it was exciting this year, because I’ve worked hard to grow as a player over the last three years on the team, and I’ve watched all of my teammates grow and continue to work hard, as well. It just felt like such a long time coming and such a well-deserved victory.”

Stokes: “This has been basically four years of work for me. My first year, I think we got to region, and we lost in overtime at region, and that was with one of the best captains we’ve ever had and best players on the team, and we got stopped short of state by one question. That got followed up by three years of attending state and progressively getting further and further until this year. We were the things that knocked us out last year; we were the team that just played the best all throughout the day and came home with the championship.”

Billips: “I’ve been here for all three states, and seeing that stair step of us getting one higher place each time, just trudging for that, was really something. It’s just something we’ve worked for for a long time, and I’m glad that we got what we deserved.”

Oakes: “Once I joined, I realized I really enjoyed the game, and I was playing with the people that are now considered my family. It’s been a really amazing experience to play with this team, and our coaches are just phenomenal. It’s been a really good experience, and I’m happy that I’ve been a part of it.”

Phipps served as interim chief during the transition phase while the formal hiring process to replace former Chief David Quillin took place. Quillin retired in December after 35 years of service, the last seven as chief.

“I consider it an honor and a privilege to have been named chief of police of such a highly professional law enforcement agency in such a supportive community,” Phipps said. “I look forward to not just leading, but also working alongside the fine men and women of the Kingsport Police Department as we move forward into the future.”

Phipps has nearly 33 years of service with almost half that time as deputy chief overseeing administration and operations. He is also a husband, father of three, grandfather of six, and is active in the community.

He is a graduate of East Tennessee State University (A.S. in law enforcement, B.S. in criminal justice) and the FBI National Academy. Prior to entering the law enforcement profession, he served four years in the United States Air Force Security Police.

During his career with the KPD, Phipps has served as patrol officer, field training officer, and supervisor of the Vice and Narcotics Unit before eventually returning to the Patrol Division as a watch commander. He has served in several specialized roles, including SWAT team operator, community relations and crime prevention officer, and Drug Abuse Resistance Education (DARE) instructor.

The city utilized a thorough and competitive process comprised of both internal and external candidates to select the new police chief, but it ultimately concluded that the KPD was already in extremely capable hands.

“I have had the privilege of working with Chief Phipps for well over a decade, and he has continually demonstrated to me, and others, that he has all the qualities to lead our police department,” City Manager Chris McCartt said. “The interview process confirmed everything I knew about Chief Phipps both personally and professionally. This process also further strengthened the fact that we are blessed to have a very well-trained police department that can serve and lead our city for decades to come.” 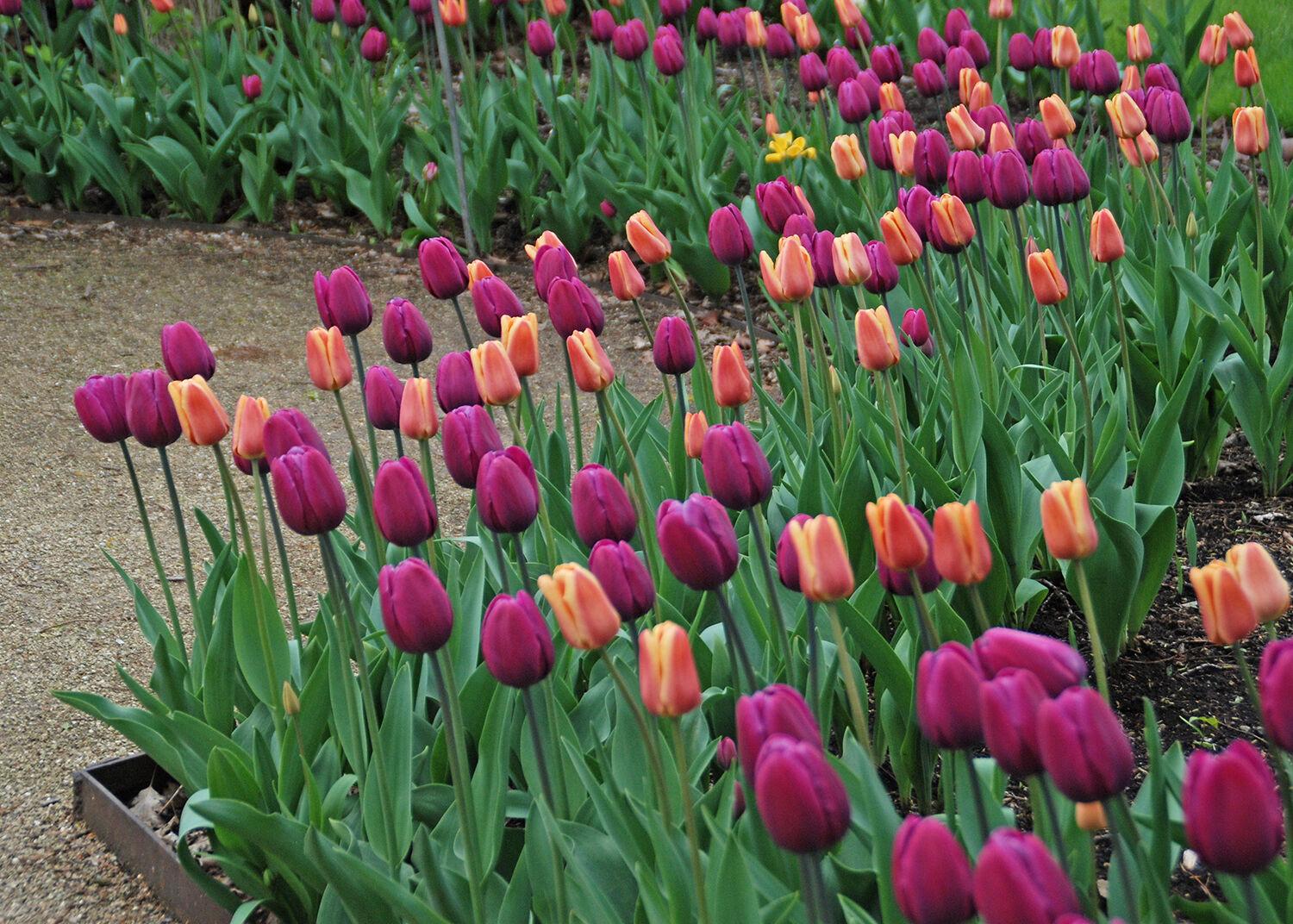 Providing proper care to tulips and other spring-flowering bulbs will extend your enjoyment and keep them coming back for years.