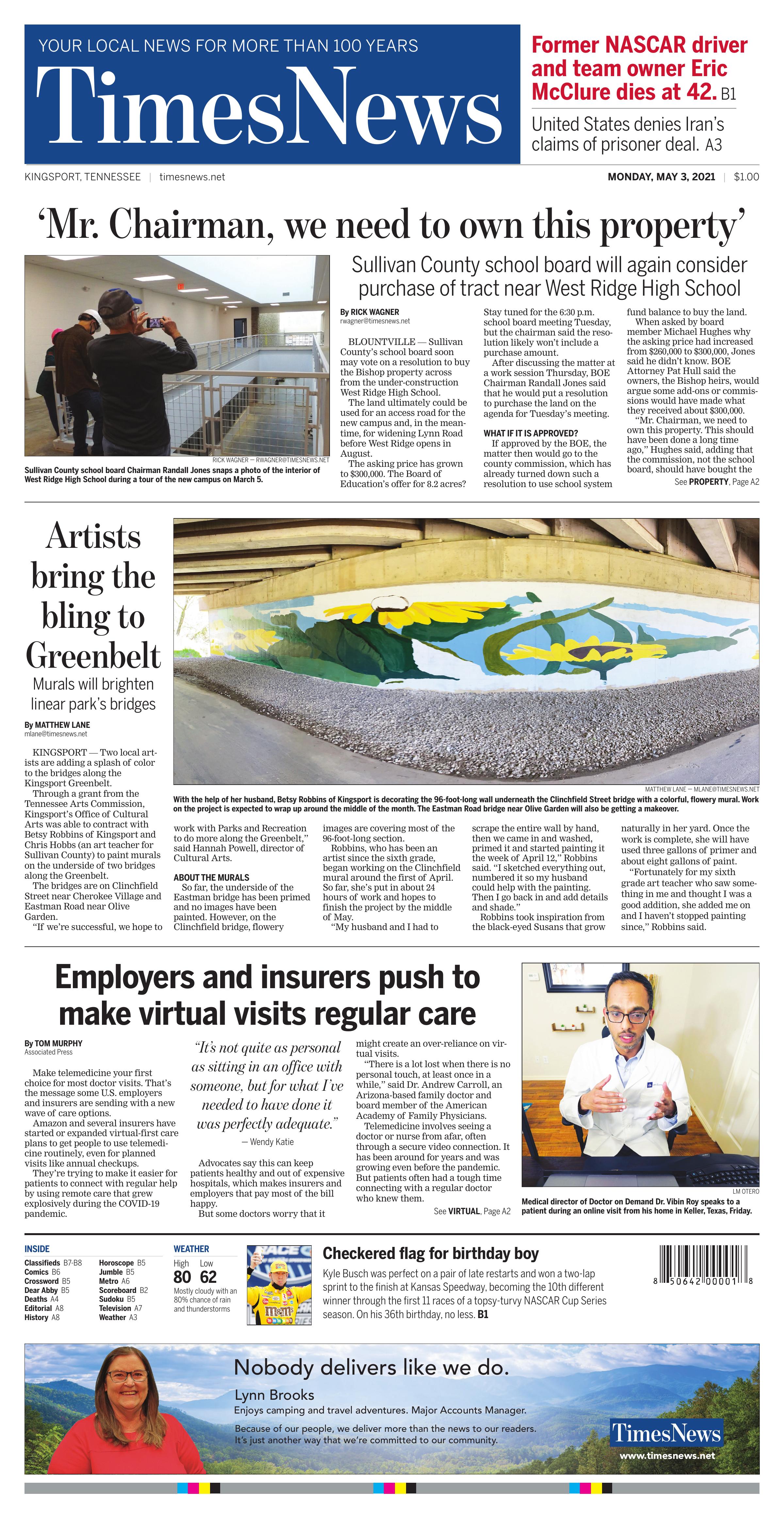 Sullivan County Board of Education Chairman Randall Jones during Thursday’s school board work session said the Tuesday voting meeting agenda will include a resolution on using school system fund balance to buy 8.2 acres of the Bishop heirs land across from the under-construction West Ridge High School. The County Commission would have to give permission for that and has already declined to do so once as part of another proposal.l

Sullivan County Board of Education member Michael Hughes said the Bishop heirs property across from the under-construction West Ridge High School needs to be purchased. The school board is to vote Tuesday on whether to ask the County Commission to allow that.

BLOUNTVILLE — Sullivan County’s school board soon may vote on a resolution to buy the Bishop property across from the under-construction West Ridge High School.

The land ultimately could be used for an access road for the new campus and, in the meantime, for widening Lynn Road before West Ridge opens in August.

The asking price has grown to $300,000. The Board of Education’s offer for 8.2 acres? Stay tuned for the 6:30 p.m. school board meeting Tuesday, but the chairman said the resolution likely won’t include a purchase amount.

After discussing the matter at a work session Thursday, BOE Chairman Randall Jones said that he would put a resolution to purchase the land on the agenda for Tuesday’s meeting.

WHAT IF IT IS APPROVED?

If approved by the BOE, the matter then would go to the county commission, which has already turned down such a resolution to use school system fund balance to buy the land.

When asked by board member Michael Hughes why the asking price had increased from $260,000 to $300,000, Jones said he didn’t know. BOE Attorney Pat Hull said the owners, the Bishop heirs, would argue some add-ons or commissions would have made what they received about $300,000.

“Mr. Chairman, we need to own this property. This should have been done a long time ago,” Hughes said, adding that the commission, not the school board, should have bought the land and built the road.

Jones said some commissioners are interested in the school system purchasing the land, beyond the two who sponsored the resolution last time, although Hughes and Vice Chairman Matthew Spivey said they believe it was and is the commission’s responsibility to purchase the land and build the road.

Jones said the city of Kingsport has paved Jericho Drive as far as Waste Management and that it hopefully could hook up to a road across the more than eight acres, a plan originally envisioned by then-Highway Commissioner Jim Belgeri, who later was part of a group that had a purchase option on the land.

Belgeri proposed the basic idea recently, again, but the commission turned down the proposal, which included paying Jericho Partners LLC for the land and to build a road on it. The proposal was amended, and Belgeri said he was open for the school system to have an outright school system purchase. However, the commission turned that down with the only two yes votes coming from the sponsors.

Jones during the work session said he wants to try to find out if an old farm access road is part of the 8.2 acres before Tuesday’s meeting. He said if it is not, the property might not be suitable for an access road after all. Another two-acre tract with a house is under contract to another buyer, Jones said.

The school board has gone back and forth with the commission over the access road for years. Most recently, the Highway Department has worked on widening Lynn Road but has indicated it can’t do so along the Bishop property because of a lack of right-of-way.

In addition, the Bishop heirs sent a cease and desist letter from an attorney in April complaining of water runoff from the school site damaging their property and seeking remediation. Jones said that claim and the right-of-way issue have “muddied” the issue of the school board or commission buying the Bishop property.

After the work session, the board went into executive session, closed to the public, to discuss the letter on behalf of the land owners and other legal matters, as allowed by Tennessee law.

Another plan is to have a driveway for the school hooking up to Henry Harr Road, but officials recently learned there was no way to get that done in time for the Aug. 9 opening of West Ridge.

The more than $65 million school, the consolidation of the Sullivan South, North and Central high schools, is being built for 1,700 students but is expected to have about 1,900 to 2,000 students in its first year of operation.

The school board is back to meeting in the first floor meeting room of the health and education building on the Blountville Bypass instead of at schools. It met there in the work session for the first time since February 2020. The address is 154 Blountville Bypass.

Arts-entertainment
centerpiece
Murals in the works along the Kingsport Greenbelt

KINGSPORT — Two local artists are adding a splash of color to the bridges along the Kingsport Greenbelt.

Through a grant from the Tennessee Arts Commission, Kingsport’s Office of Cultural Arts was able to contract with Betsy Robbins of Kingsport and Chris Hobbs (an art teacher for Sullivan County) to paint murals on the underside of two bridges along the Greenbelt.

The bridges are on Clinchfield Street near Cherokee Village and Eastman Road near Olive Garden.

“If we’re successful, we hope to work with Parks and Recreation to do more along the Greenbelt,” said Hannah Powell, director of Cultural Arts. 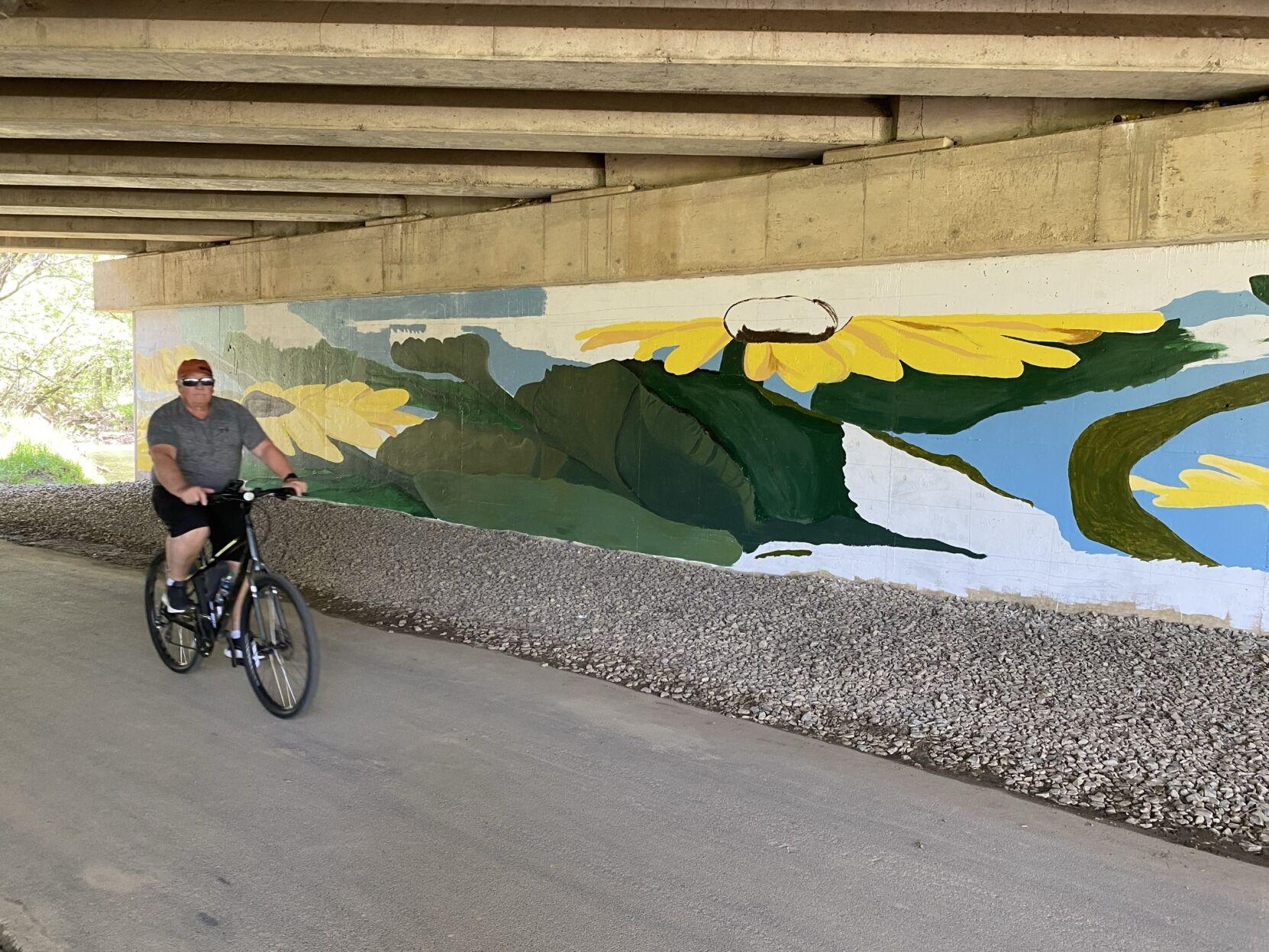 With the help of her husband, Betsy Robbins of Kingsport is decorating the 96-foot-long wall underneath the Clinchfield Street bridge with a colorful, flowery mural. Work on the project is expected to wrap up around the middle of the month. The Eastman Road bridge near Olive Garden will also be getting a makeover.

So far, the underside of the Eastman bridge has been primed and no images have been painted. However, on the Clinchfield bridge, flowery images are covering most of the 96-foot-long section.

Robbins, who has been an artist since the sixth grade, began working on the Clinchfield mural around the first of April. So far, she’s put in about 24 hours of work and hopes to finish the project by the middle of May.

“My husband and I had to scrape the entire wall by hand, then we came in and washed, primed it and started painting it the week of April 12,” Robbins said. “I sketched everything out, numbered it so my husband could help with the painting. Then I go back in and add details and shade.”

Robbins took inspiration from the black-eyed Susans that grow naturally in her yard. Once the work is complete, she will have used three gallons of primer and about eight gallons of paint.

“Fortunately for my sixth grade art teacher who saw something in me and thought I was a good addition, she added me on and I haven’t stopped painting since,” Robbins said. 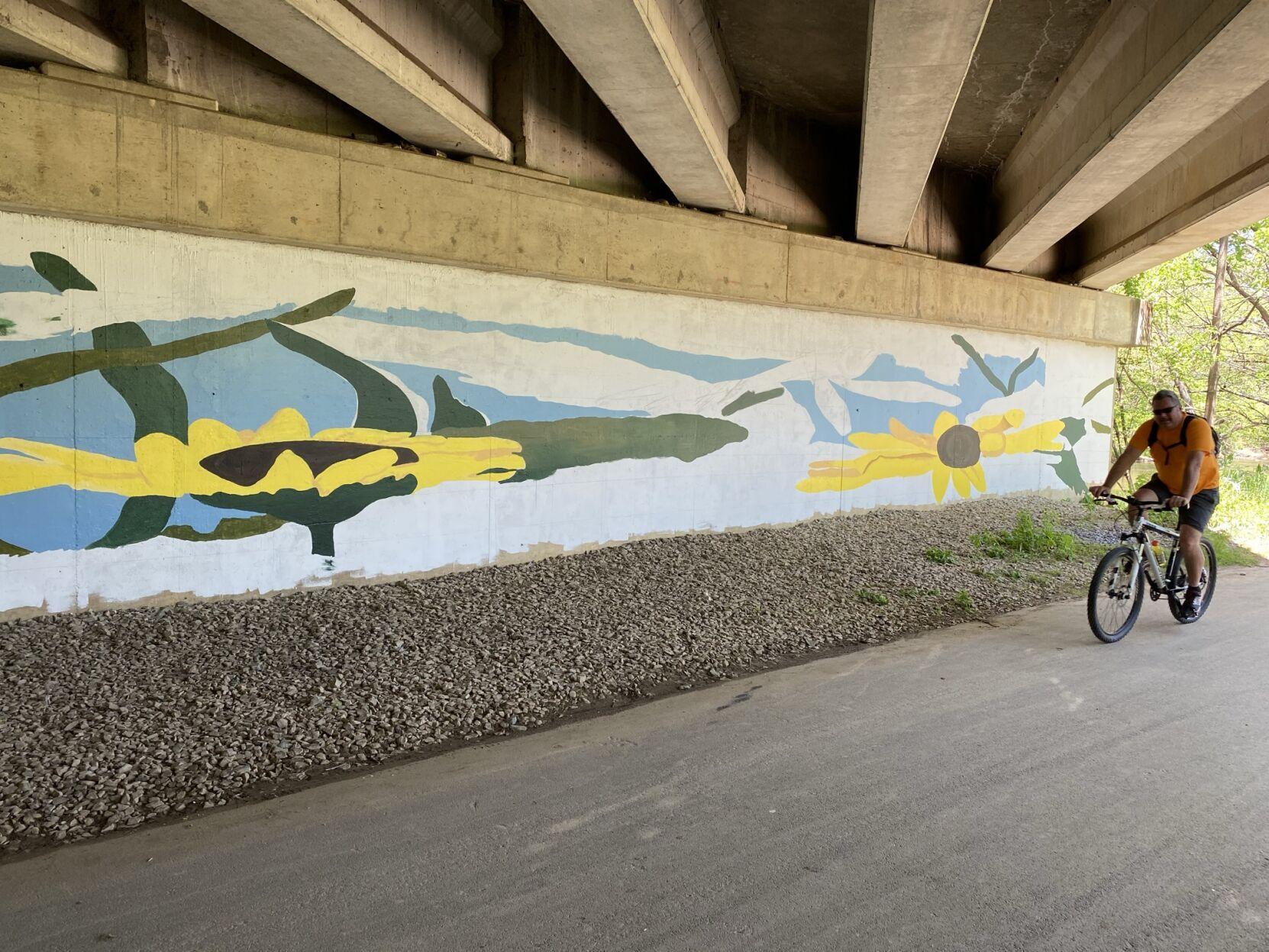 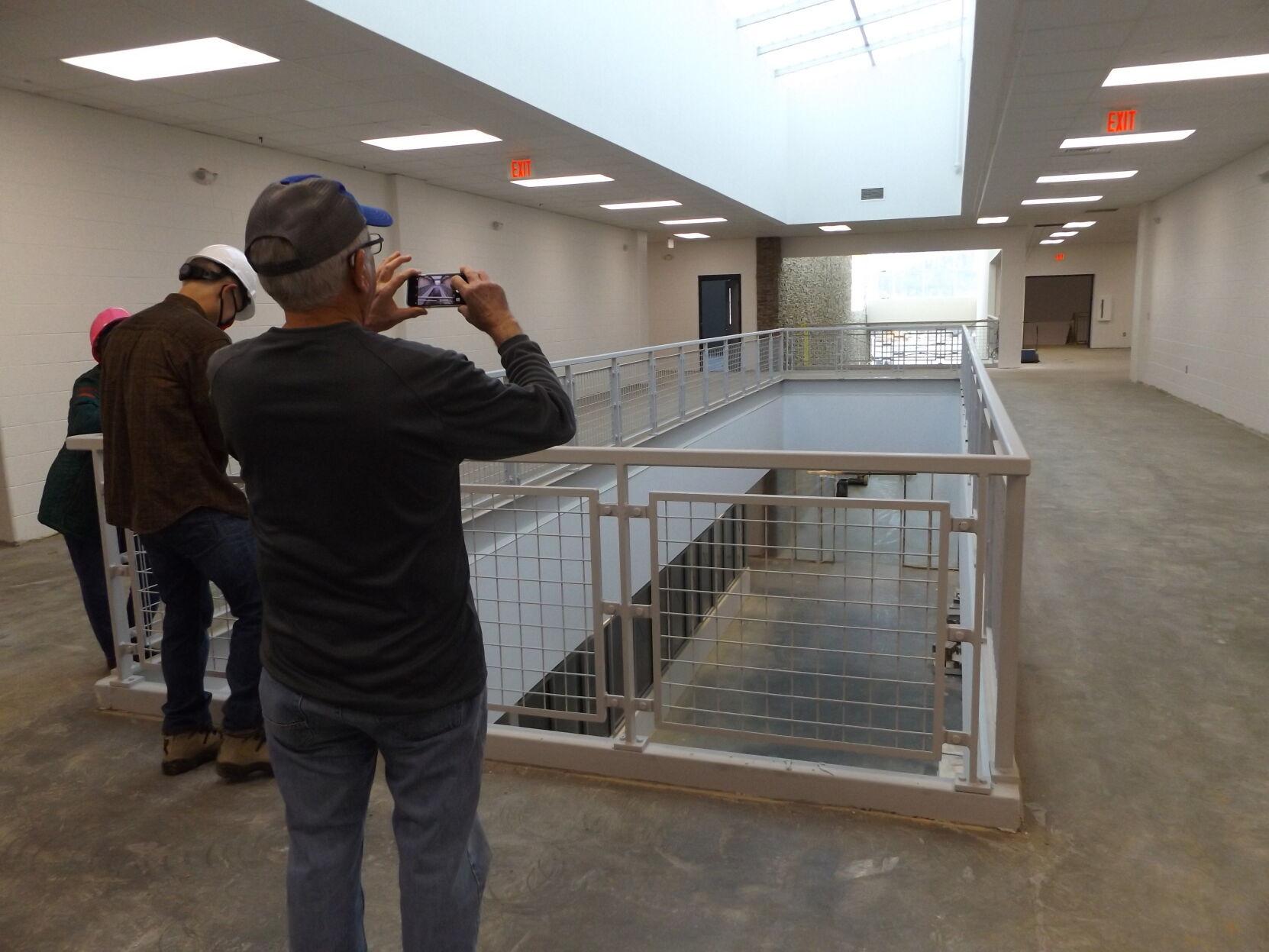 Sullivan County school board Chairman Randall Jones snaps a photo of the interior of West Ridge High School during a tour of the new campus on March 5. 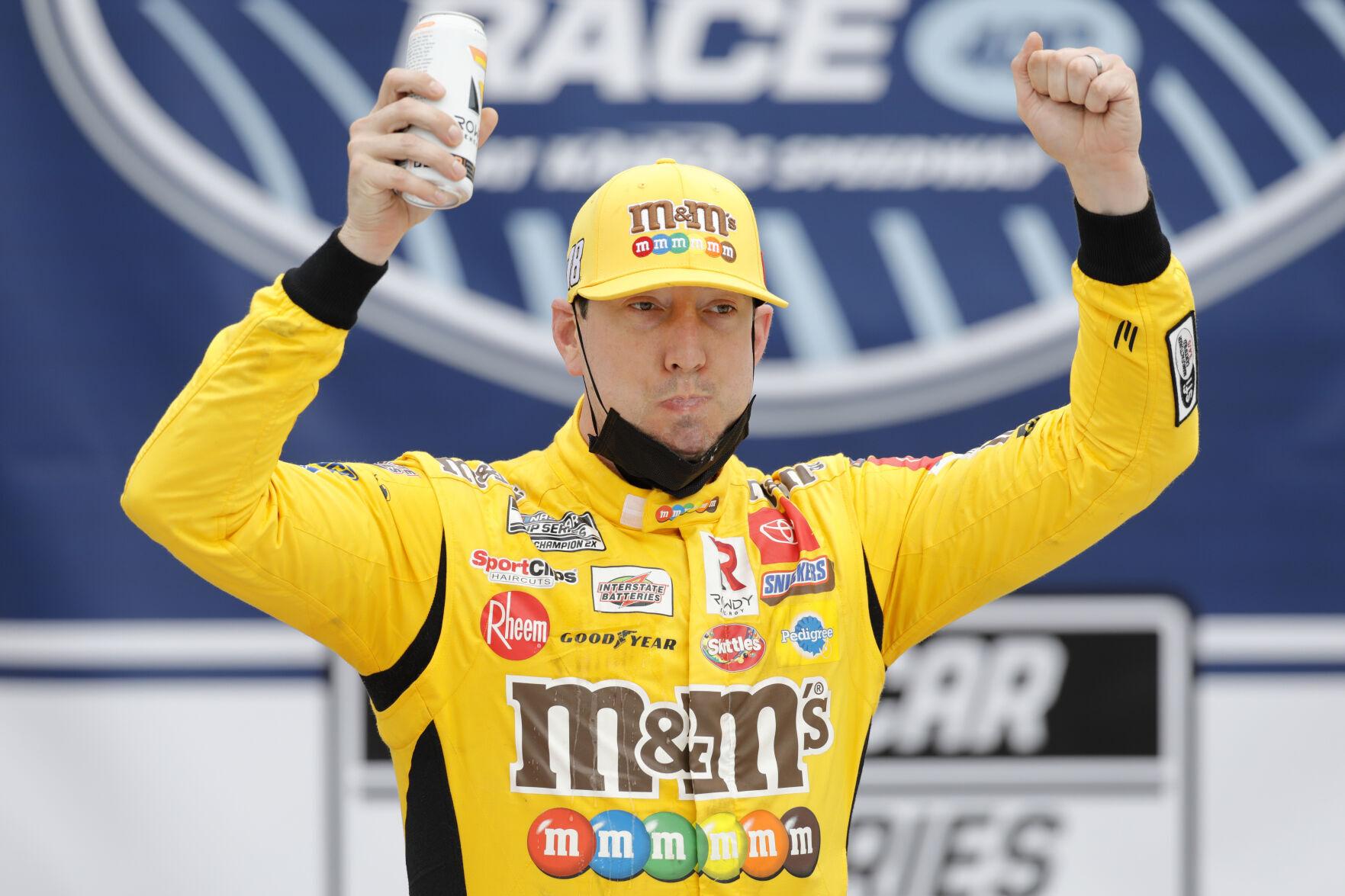