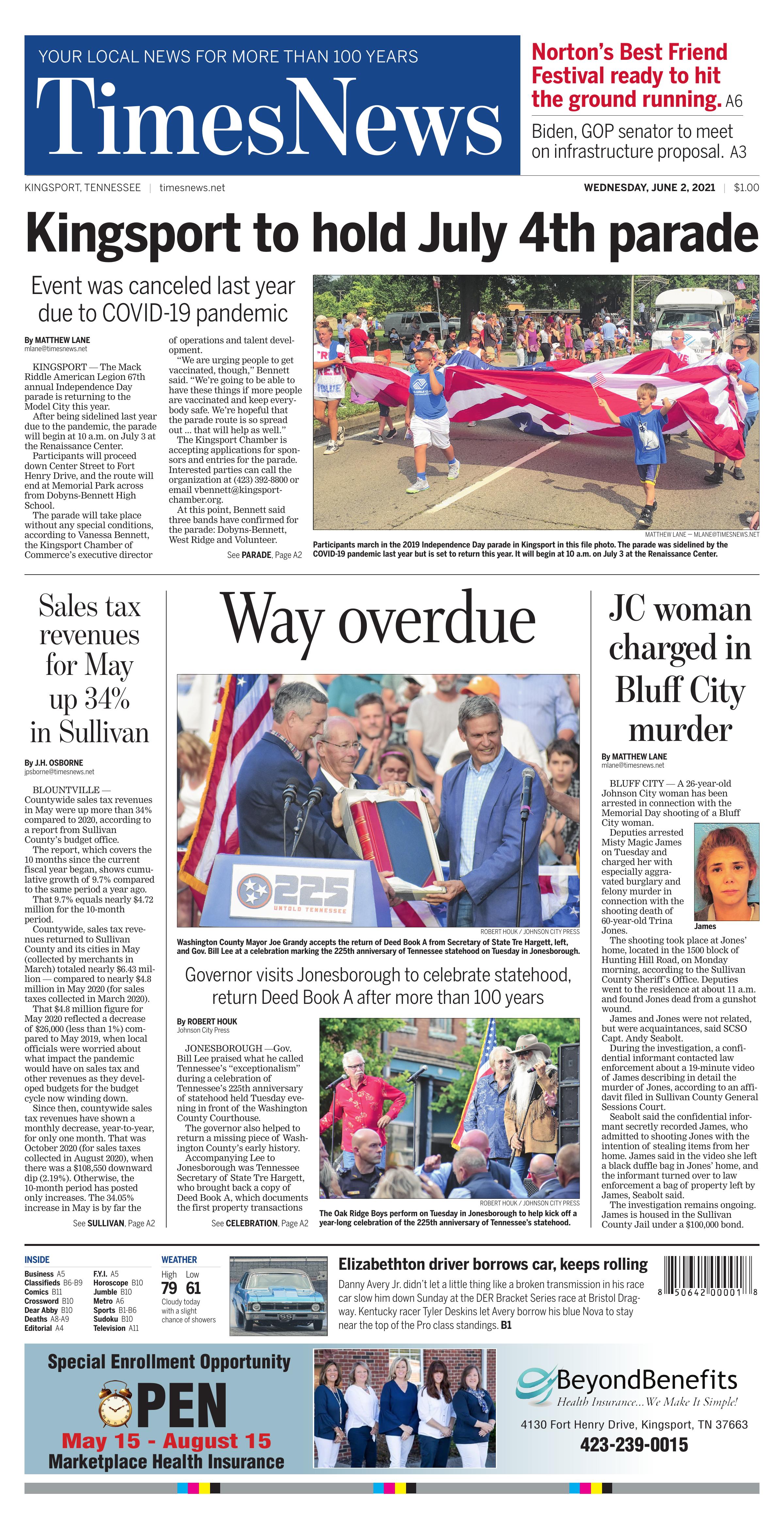 Participants march in the 2019 Independence Day parade in Kingsport in this file photo. The parade was sidelined by the COVID-19 pandemic last year but is set to return this year. It will begin at 10 a.m. on July 3 at the Renaissance Center.

After being sidelined last year due to the pandemic, the parade will begin at 10 a.m. on July 3 at the Renaissance Center.

Participants will proceed down Center Street to Fort Henry Drive, and the route will end at Memorial Park across from Dobyns-Bennett High School.

The parade will take place without any special conditions, according to Vanessa Bennett, the Kingsport Chamber of Commerce’s executive director of operations and talent development.

“We are urging people to get vaccinated, though,” Bennett said. “We’re going to be able to have these things if more people are vaccinated and keep everybody safe. We’re hopeful that the parade route is so spread out ... that will help as well.”

The Kingsport Chamber is accepting applications for sponsors and entries for the parade. Interested parties can call the organization at (423) 392-8800 or email vbennett@kingsportchamber.org.

At this point, Bennett said three bands have confirmed for the parade: Dobyns-Bennett, West Ridge and Volunteer.

Additionally, West Ridge will include its dance team, ROTC and cheerleaders, Bennett said.

“We’ll be announcing our grand marshal soon,” Bennett said. “I think it’s going to be some people that everybody will be proud of.”

The Twilight Alive Concert series will kick off that evening and include a fireworks display. More information about those two events will be released soon by the chamber, Bennett said.

“It has been a tough year for all of us through the pandemic,” Bennett said. “(The parade) will be a great way our community can join together as we celebrate our freedom and honor those who serve and sacrifice for our country.”

Washington County Mayor Joe Grandy accepts the return of Deed Book A from Secretary of State Tre Hargett, left, and Gov. Bill Lee at a celebration marking the 225th anniversary of Tennessee statehood on Tuesday in Jonesborough.

Gov. Bill Lee acknowledges the crowd as he is introduced at a 225th Tennessee statehood celebration in front of the Washington County Courthouse on Tuesday.

Thousands brought their lawn chairs and crowded Main Street near the steps of Washington County Courthouse to see Gov. Bill Lee and the OakRidge Boys on Tuesday.

The Oak Ridge Boys perform on Tuesday in Jonesborough to help kick off a year-long celebration of the 225th anniversary of Tennessee’s statehood.

Rosie Cioe, right, traveled from her home in Del Rio to attend the statehood celebration with her friends and Jonesborough residents Woody and Pat Tipton and Margaret McKay.

JONESBOROUGH —Gov. Bill Lee praised what he called Tennessee’s “exceptionalism” during a celebration of Tennessee’s 225th anniversary of statehood held Tuesday evening in front of the Washington County Courthouse.

Accompanying Lee to Jonesborough was Tennessee Secretary of State Tre Hargett, who brought back a copy of Deed Book A, which documents the first property transactions of frontier Washington County in what would eventually become the state of Tennessee.

Hargett apologized for taking such “a long time to return” the historic document to Tennessee’s oldest town, and said that he “hopes there are no late fees.”

The hand-written transcription of Deed Book A was sent to Nashville in 1897 as part of Washington County’s contribution to the celebration of the Tennessee Centennial and International Exposition.

It had remained in Nashville until county officials and state lawmakers successfully argued for its return to Jonesborough earlier this year.

The first transaction in the deed book is dated March 19, 1775, and was an agreement between Watauga and Nolichucky settlement leaders and Cherokee chiefs.

Washington County Mayor Joe Grandy said it was “colossal” to have the deed book back in Jonesborough, and he thanked the governor for launching a year-long celebration of Tennessee’s 225th statehood celebration in the county seat.

He and Lee both acknowledged the large crowd that included thousands of people seated in lawn chairs who gathered on Main Street to see the governor and listen to a performance by the Oak Ridge Boys. Grandy also said leaders of the town of Jonesborough “know how to throw a party.”

In introducing the governor, U.S. Sen Marsha Blackburn, R-Tenn., said that while Tennessee’s first 225 years looked “mighty good,” she believes “the best is yet to come.”

Lee told the audience his administration has created a website, www.tennessee225.com, to allow Tennesseans to tell the state’s story.

“People often comment that Tennessee is God’s country,” the governor said. “It was founded by faithful people with working hands. I believe Tennessee is still America at its best.”

You can watch a video of the governor’s visit at https://www.youtube.com/watch?v=ceSEvFvrZOI.

Spectators began assembling near the Jonesborough courthouse as early as 10 a.m. One was Rosie Cioe, who moved to Del Rio from another state three years ago.

Cioe said she wanted to get a good seat to see Lee, Blackburn and the Oak Ridge Boys.

“They are triple winners in my book,” she said.

A group of protesters also assembled near the steps of the historic Jonesborough courthouse on Tuesday to greet the governor with signs supporting transgender rights and challenging Lee’s decision to sign the so-called transgender “bathroom bill” into state law.

BLUFF CITY — A 26-year-old Johnson City woman has been arrested in connection with the Memorial Day shooting of a Bluff City woman.

Deputies arrested Misty Magic James on Tuesday and charged her with especially aggravated burglary and felony murder in connection with the shooting death of 60-year-old Trina Jones.

The shooting took place at Jones’ home, located in the 1500 block of Hunting Hill Road, on Monday morning, according to the Sullivan County Sheriff’s Office. Deputies went to the residence at about 11 a.m. and found Jones dead from a gunshot wound.

James and Jones were not related, but were acquaintances, said SCSO Capt. Andy Seabolt.

During the investigation, a confidential informant contacted law enforcement about a 19-minute video of James describing in detail the murder of Jones, according to an affidavit filed in Sullivan County General Sessions Court.

Seabolt said the confidential informant secretly recorded James, who admitted to shooting Jones with the intention of stealing items from her home. James said in the video she left a black duffle bag in Jones’ home, and the informant turned over to law enforcement a bag of property left by James, Seabolt said.

The investigation remains ongoing. James is housed in the Sullivan County Jail under a $100,000 bond.

BLOUNTVILLE — Countywide sales tax revenues in May were up more than 34% compared to 2020, according to a report from Sullivan County’s budget office.

The report, which covers the 10 months since the current fiscal year began, shows cumulative growth of 9.7% compared to the same period a year ago.

Countywide, sales tax revenues returned to Sullivan County and its cities in May (collected by merchants in March) totaled nearly $6.43 million — compared to nearly $4.8 million in May 2020 (for sales taxes collected in March 2020).

That $4.8 million figure for May 2020 reflected a decrease of $26,000 (less than 1%) compared to May 2019, when local officials were worried about what impact the pandemic would have on sales tax and other revenues as they developed budgets for the budget cycle now winding down.

Since then, countywide sales tax revenues have shown a monthly decrease, year-to-year, for only one month. That was October 2020 (for sales taxes collected in August 2020), when there was a $108,550 downward dip (2.19%). Otherwise, the 10-month period has posted only increases. The 34.05% increase in May is by far the most dramatic, but it continues a double-digit increase for the third month in a row.

Kingsport continues to produce the largest chunk of sales taxes generated within the county, but Bristol and areas outside any city experienced larger growth as a percentage, year over year.

For the 10-month period, sales tax revenues countywide totaled nearly $53.3 million (compared to $48.6 million for the same period a year ago).

Where does it go?

Half of the money goes to local school systems:

Sullivan County’s non-school year-to-date share is nearly $4.2 million, up $691,000 (19.7%) compared to this point last year. That has the potential for the greatest impact on the county’s budget for the upcoming fiscal year. The county dedicates the first $2.5 million of its annual sales tax revenue to the Sullivan County Highway Department.

Anything over that amount goes to support the county’s general fund.

June sales tax collections, for example, will return as revenue to Sullivan County, Kingsport, Bristol, Bluff City and Johnson City — as well as to the three school systems in the county — in August. 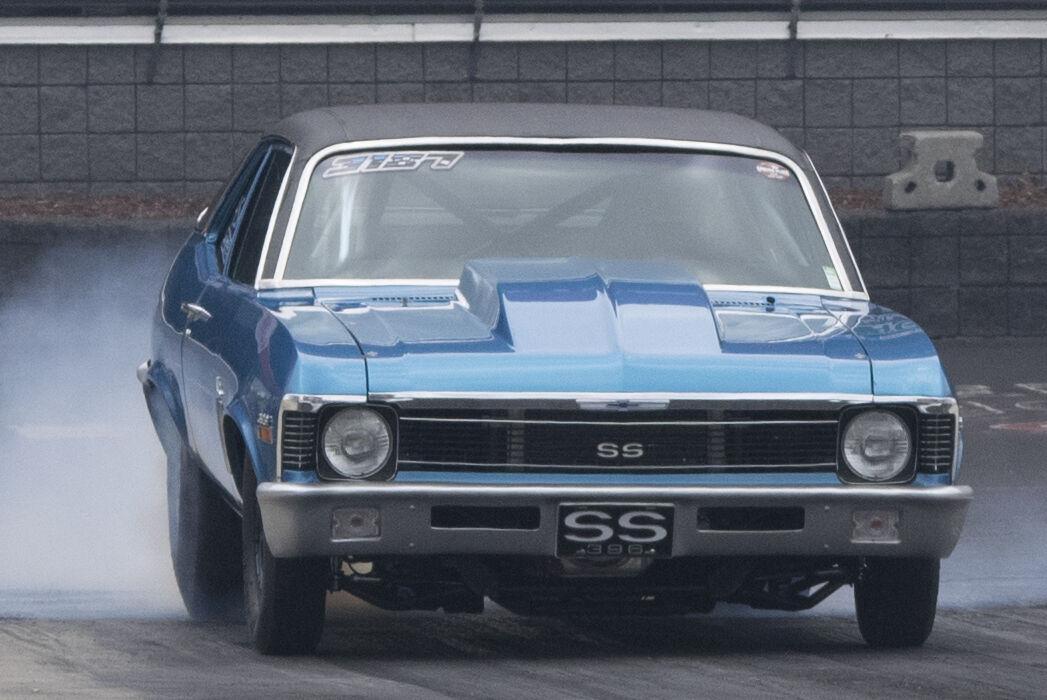