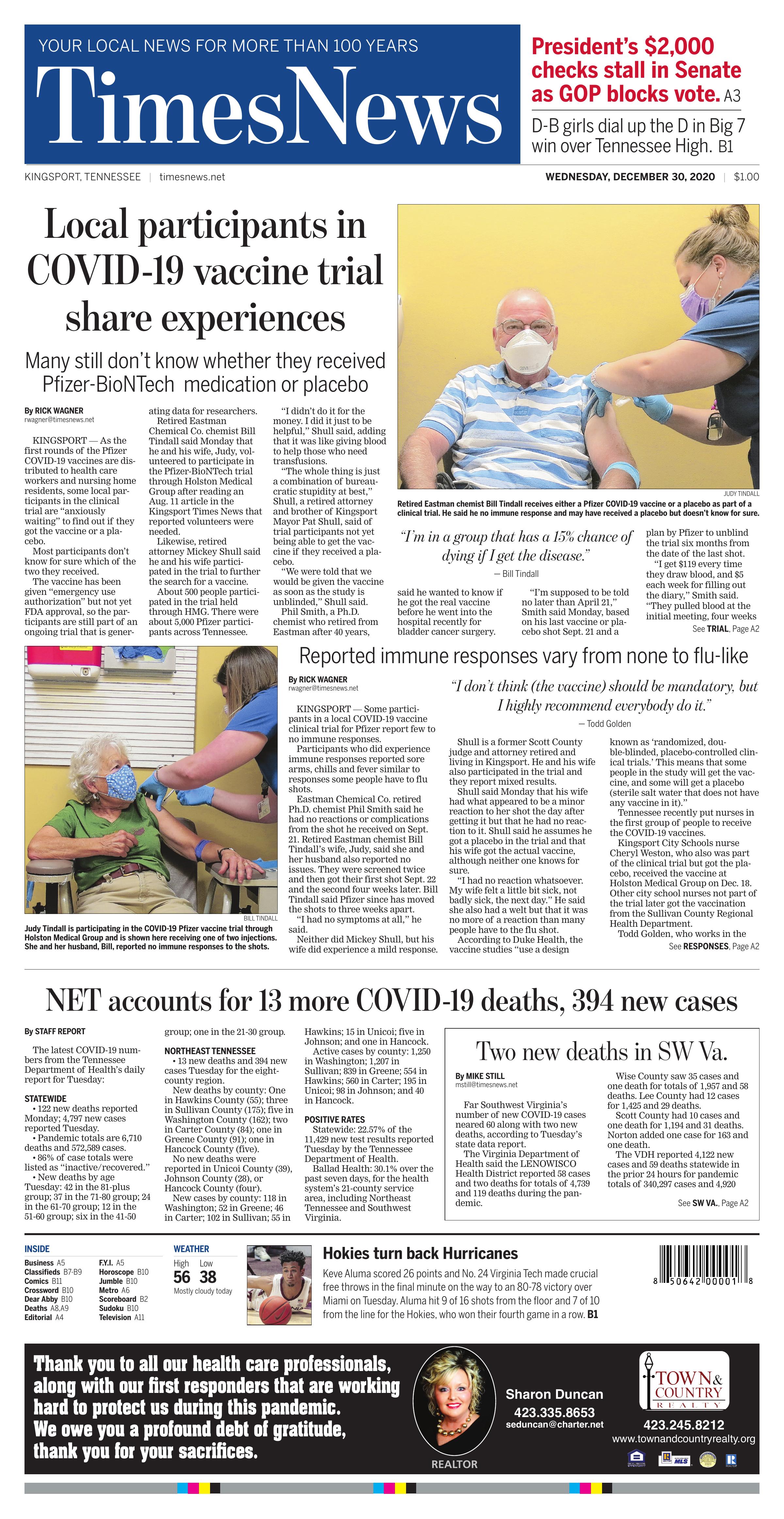 Retired Eastman chemist Bill Tindall receives a shot during a COVID-19 vaccine trial. Local participants in the trial are learning whether they got the real vaccine and will have the opportunity to get the vaccine if they didn’t already receive it.

Eastman Chemical Company retired chemist Bill Tindall demonstrates florescence at the Celebration of Chemistry for Fourth Graders in September of 2019 at the Eastman Employee Center.

KINGSPORT — As the first rounds of the Pfizer COVID-19 vaccines are distributed to health care workers and nursing home residents, some local participants in the clinical trial are “anxiously waiting” to find out if they got the vaccine or a placebo.

Most participants don’t know for sure which of the two they received.

The vaccine has been given “emergency use authorization” but not yet FDA approval, so the participants are still part of an ongoing trial that is generating data for researchers.

Retired Eastman Chemical Co. chemist Bill Tindall said Monday that he and his wife, Judy, volunteered to participate in the Pfizer-BioNTech trial through Holston Medical Group after reading an Aug. 11 article in the Kingsport Times News that reported volunteers were needed.

Likewise, retired attorney Mickey Shull said he and his wife participated in the trial to further the search for a vaccine.

About 500 people participated in the trial held through HMG. There were about 5,000 Pfizer participants across Tennessee.

“I didn’t do it for the money. I did it just to be helpful,” Shull said, adding that it was like giving blood to help those who need transfusions.

“The whole thing is just a combination of bureaucratic stupidity at best,” Shull, a retired attorney and brother of Kingsport Mayor Pat Shull, said of trial participants not yet being able to get the vaccine if they received a placebo.

“We were told that we would be given the vaccine as soon as the study is unblinded,” Shull said.

Phil Smith, a Ph.D. chemist who retired from Eastman after 40 years, said he wanted to know if he got the real vaccine before he went into the hospital recently for bladder cancer surgery.

"Being a researcher, I don't have a problem with risk," said Phil Smith, 69 and a cancer survivor. "But I'd appreciate priority for vaccination if I don't already have it."

“I’m supposed to be told no later than April 21,” Smith said Monday, based on his last vaccine or placebo shot Sept. 21 and a plan by Pfizer to unblind the trial six months from the date of the last shot.

“Neither physicians nor us know what we got,” Tindall said. “We don’t know if we were inoculated or we received a placebo.”

The Tindalls, Shulls, Smith and other participants were told they would receive the vaccine, set aside for them at HMG, if they had received the placebo when the Pfizer vaccine was approved and the trial ended.

The FDA Office of Media Affairs said in an email to the Times News this week that it is weighing the benefit of continuing the trials versus vaccinating as many people as possible in the coming weeks and months.

The FDA wants to continue getting trial data on any effects the vaccine might have in the long term.

“They (FDA) officials asked Pfizer not to unblind us. At this point, we kind of got screwed,” Tindall said.

A Monday statement from Pfizer called trial participants “courageous volunteers” in the fight against COVID-19.

“We have developed a Vaccine Transition Option so that all interested, eligible participants 16 years and older in the placebo group have the option to move into the vaccine group in the study,” the Monday statement from Pfizer Media Relations said.

“Participants should not have to choose between remaining in the study or receiving the investigational vaccine if it is available to them in their community,” the statement said. “The Vaccine Transition Option will be implemented in a phased approach, starting with those who would qualify for vaccination if they were not part of the clinical trial.

Tindall said HMG is not to blame for any of the issues clinical trial participants face and provided a Nov. 10 letter to participants, saying early opt outs would require regulatory authority approval.

Smith said the issue is with the FDA.

“Is the incremental data you’re going to get worth that risk?” Smith said. “Being a researcher, I don’t have a problem with risk. But I’d appreciate priority for vaccination if I don’t already have it.”

"We're just anxiously waiting to know," Judy Tindall said of finding out if she and her husband got a placebo or the actual vaccine.

Judy Tindall is participating in the COVID-19 Pfizer vaccine trial through Holston Medical Group and is shown here receiving one of two injections. She and her husband, Bill, reported no immune responses to the shots.

KINGSPORT — Some participants in a local COVID-19 vaccine clinical trial for Pfizer report few to no immune responses.

Participants who did experience immune responses reported sore arms, chills and fever similar to responses some people have to flu shots.

Eastman Chemical Co. retired Ph.D. chemist Phil Smith said he had no reactions or complications from the shot he received on Sept. 21. Retired Eastman chemist Bill Tindall’s wife, Judy, said she and her husband also reported no issues. They were screened twice and then got their first shot Sept. 22 and the second four weeks later. Bill Tindall said Pfizer since has moved the shots to three weeks apart.

Neither did Mickey Shull, but his wife did experience a mild response.

Shull is a former Scott County judge and attorney retired and living in Kingsport. He and his wife also participated in the trial and they report mixed results.

Shull said Monday that his wife had what appeared to be a minor reaction to her shot the day after getting it but that he had no reaction to it. Shull said he assumes he got a placebo in the trial and that his wife got the actual vaccine, although neither one knows for sure.

“I had no reaction whatsoever. My wife felt a little bit sick, not badly sick, the next day.” He said she also had a welt but that it was no more of a reaction than many people have to the flu shot.

According to Duke Health, the vaccine studies “use a design known as ‘randomized, double-blinded, placebo-controlled clinical trials.’ This means that some people in the study will get the vaccine, and some will get a placebo (sterile salt water that does not have any vaccine in it).”

Tennessee recently put nurses in the first group of people to receive the COVID-19 vaccines.

Kingsport City Schools nurse Cheryl Weston, who also was part of the clinical trial but got the placebo, received the vaccine at Holston Medical Group on Dec. 18. Other city school nurses not part of the trial later got the vaccination from the Sullivan County Regional Health Department.

Todd Golden, who works in the medical field and is a Kingsport school board member, was also in the vaccine trial. He said that following his first shot he had little immune response, but he had a more pronounced response following the second shot.

“I did have an immune response in both shots,” Golden said. “The second one was more pronounced.”

“I don’t think (the vaccine) should be mandatory, but I highly recommend everybody do it,” Golden said.

All trial participants interviewed said they supported taking the vaccine.

“This is revolutionary and a little bit worrisome,” Tindall said of how the new vaccine works. “The hero (title) gets tossed around kind of carelessly, but we (in the clinical trials) put our asses on the line.”

The latest COVID-19 numbers from the Tennessee Department of Health’s daily report for Tuesday:

• 86% of case totals were listed as “inactive/recovered.”

• 13 new deaths and 394 new cases Tuesday for the eight-county region.

Statewide: 22.57% of the 11,429 new test results reported Tuesday by the Tennessee Department of Health.

Ballad Health: 30.1% over the past seven days, for the health system’s 21-county service area, including Northeast Tennessee and Southwest Virginia.

The Virginia Department of Health said the LENOWISCO Health District reported 58 cases and two deaths for totals of 4,739 and 119 deaths during the pandemic.

The seven-day average rate of positive PCR test results in the LENOWISCO district in Tuesday’s report rose from 21.4% to 22.5%. The statewide positivity rate dropped from 12.3% to 12.2%.

Red Onion State Prison added one inmate case and five staff cases for totals of 25 inmate cases and 23 active staff/contractor cases Tuesday, according to the Virginia Department of Corrections.

According to Tuesday’s VDH pandemic measures dashboard, daily case incidence in the far southwest region of Virginia — including the LENOWISCO Health District — were ranked as decreasing after a 14-day drop in daily case rates. The far southwest region ranking for percent positivity of COVID-19 testing results was classed as fluctuating based on a nine-day decrease in that measure. 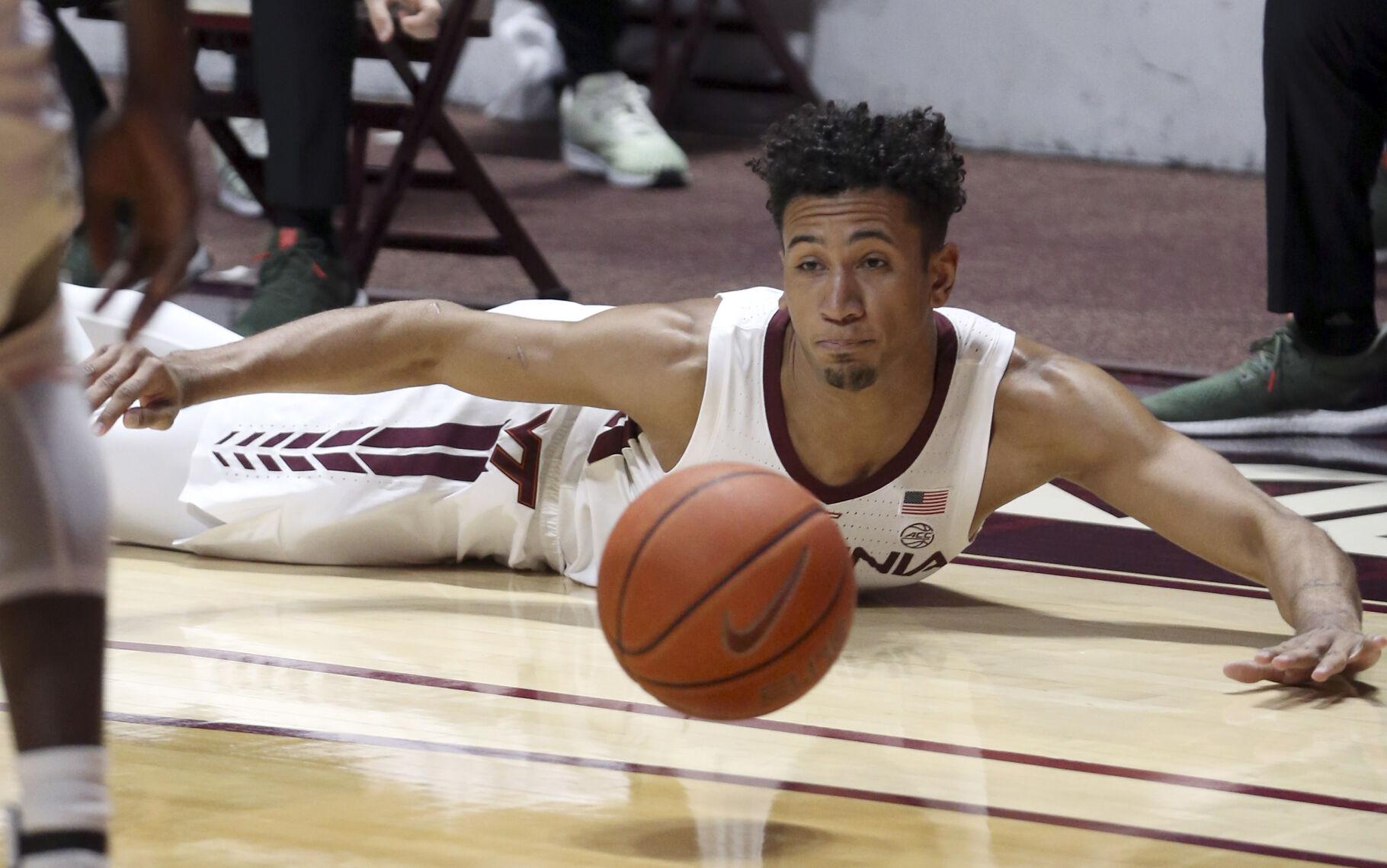