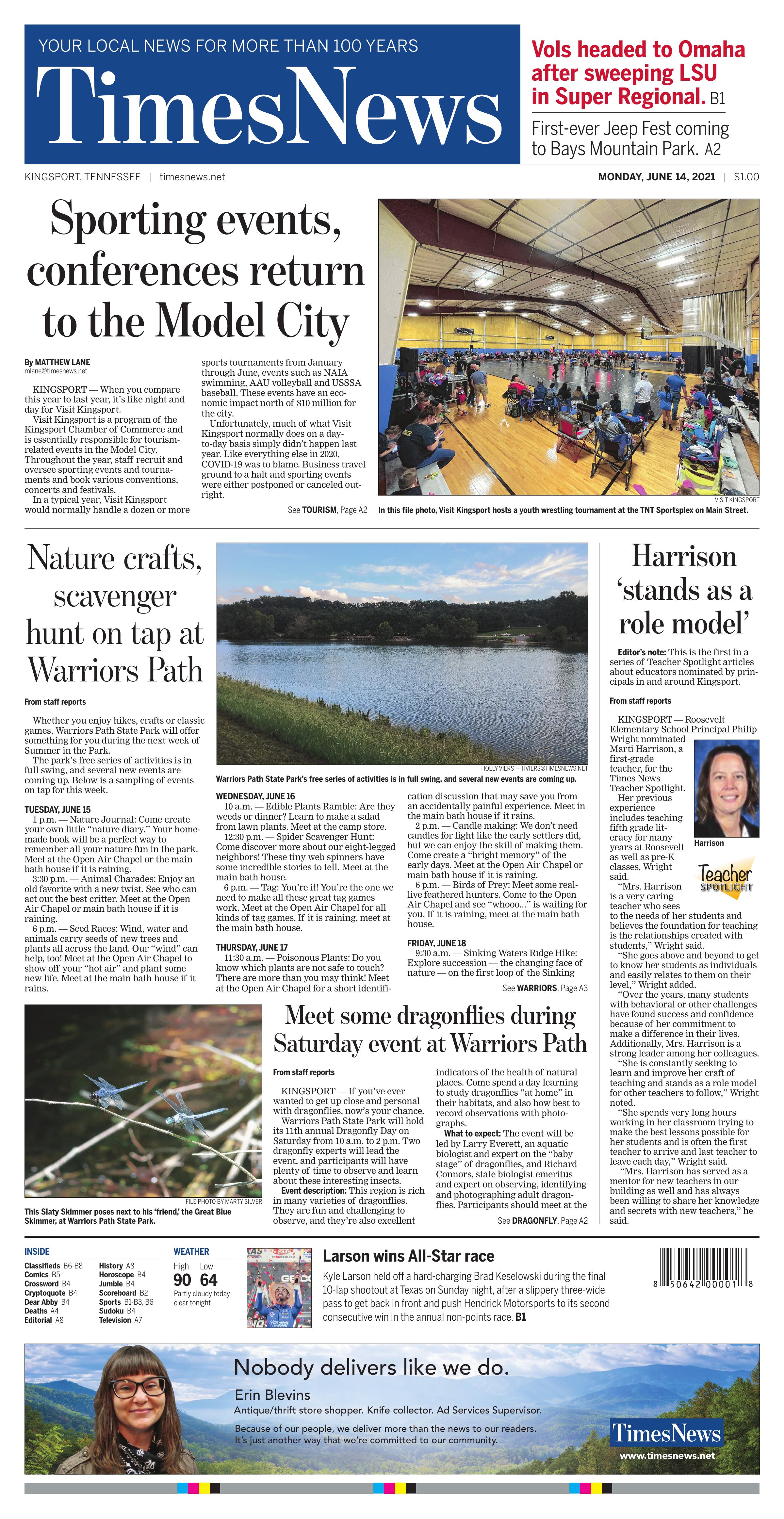 Whether you’re into nature programs, scavenger hunts, hikes or fun around the campfire, Warriors’ Path has something for you.

Warriors Path State Park’s free series of activities is in full swing, and several new events are coming up.

Whether you enjoy hikes, crafts or classic games, Warriors Path State Park will offer something for you during the next week of Summer in the Park.

The park’s free series of activities is in full swing, and several new events are coming up. Below is a sampling of events on tap for this week.

1 p.m. — Nature Journal: Come create your own little “nature diary.” Your homemade book will be a perfect way to remember all your nature fun in the park. Meet at the Open Air Chapel or the main bath house if it is raining.

3:30 p.m. — Animal Charades: Enjoy an old favorite with a new twist. See who can act out the best critter. Meet at the Open Air Chapel or main bath house if it is raining.

6 p.m. — Seed Races: Wind, water and animals carry seeds of new trees and plants all across the land. Our “wind” can help, too! Meet at the Open Air Chapel to show off your “hot air” and plant some new life. Meet at the main bath house if it rains.

10 a.m. — Edible Plants Ramble: Are they weeds or dinner? Learn to make a salad from lawn plants. Meet at the camp store.

6 p.m. — Tag: You’re it! You’re the one we need to make all these great tag games work. Meet at the Open Air Chapel for all kinds of tag games. If it is raining, meet at the main bath house.

11:30 a.m. — Poisonous Plants: Do you know which plants are not safe to touch? There are more than you may think! Meet at the Open Air Chapel for a short identification discussion that may save you from an accidentally painful experience. Meet in the main bath house if it rains.

2 p.m. — Candle making: We don’t need candles for light like the early settlers did, but we can enjoy the skill of making them. Come create a “bright memory” of the early days. Meet at the Open Air Chapel or main bath house if it is raining.

6 p.m. — Birds of Prey: Meet some real-live feathered hunters. Come to the Open Air Chapel and see “whooo...” is waiting for you. If it is raining, meet at the main bath house.

9:30 a.m. — Sinking Waters Ridge Hike: Explore succession — the changing face of nature — on the first loop of the Sinking Waters Trail. We’ll discover the woodlands changing all around us. Drive to the camp store, and we’ll carpool to the start of the trail.

4 p.m. — Honeysuckle Baskets: Come try your hand at weaving baskets out of old honeysuckle vines. Those old-timey baskets are not as hard to make as they look! Meet at the main bath house.

6:30 p.m. — Nature Jeopardy: Let’s try out this natural version of the famous game show. Test your skills and see how much you really know about nature. Meet at the Open Air Chapel or main bath house if it is raining.

10:30 a.m. — Leaf Prints: “Ordinary” leaves come in such extraordinary shapes and textures. We can capture these patterns with ink and paper. Come make a leaf souvenir at the main bath house.

1 p.m. — Nature Wreaths: We can use nature’s incredible patterns and textures to create a beautiful decoration. Meet at the Open Air Chapel and bring your creativity! In case of rain, meet at the main bath house.

9 a.m. — Worship Service: Enjoy a peaceful morning worship service at the Open Air Chapel or at the pool entrance if it is raining. The service is sponsored by Colonial Heights Baptist Church.

To view the complete schedule for each day, visit tnstateparks.com/parks/warriors-path and click on “Upcoming Events.”

This Slaty Skimmer poses next to his ‘friend,’ the Great Blue Skimmer, at Warriors Path State Park.

This 12-spotted Skimmer was spotted at Warriors' Path.

This Swamp Darner lays her eggs one at a time in this bit of rotten wood at Warriors' Path.

KINGSPORT — If you’ve ever wanted to get up close and personal with dragonflies, now’s your chance.

Warriors Path State Park will hold its 11th annual Dragonfly Day on Saturday from 10 a.m. to 2 p.m. Two dragonfly experts will lead the event, and participants will have plenty of time to observe and learn about these interesting insects.

Event description: This region is rich in many varieties of dragonflies. They are fun and challenging to observe, and they’re also excellent indicators of the health of natural places. Come spend a day learning to study dragonflies “at home” in their habitats, and also how best to record observations with photographs.

What to expect: The event will be led by Larry Everett, an aquatic biologist and expert on the “baby stage” of dragonflies, and Richard Connors, state biologist emeritus and expert on observing, identifying and photographing adult dragonflies. Participants should meet at the park’s pool entrance for a short talk on dragonfly observation and identification. Most of the day will be spent “out in the field” in the park’s rich wetland habitats.

Come prepared: Plan to spend a warm summer day outdoors in a variety of natural places, getting up close and personal with native dragonflies. Bring a sack lunch and dress for wet field conditions. Participants should also bring close-focusing binoculars and a camera, if they have them. Guests can also bring a few dragonfly photos to share and have identified, time permitting.

How to attend: The cost per person is $5, and all participants must pre-register. To register online, visit tnstateparks.com/parks/event_details/warriors-path/#/?event=dragonfly-day--11th-annual.

In this file photo, Visit Kingsport hosts a youth wrestling tournament at the TNT Sportsplex on Main Street.

So far this year, Visit Kingsport has had 16 sporting events with an estimated $8 million economic impact to the city. Among the events was the Appalachian Athletic Conference softball championship.

KINGSPORT — When you compare this year to last year, it’s like night and day for Visit Kingsport.

Visit Kingsport is a program of the Kingsport Chamber of Commerce and is essentially responsible for tourism- related events in the Model City. Throughout the year, staff recruit and oversee sporting events and tournaments and book various conventions, concerts and festivals.

In a typical year, Visit Kingsport would normally handle a dozen or more sports tournaments from January through June, events such as NAIA swimming, AAU volleyball and USSSA baseball. These events have an economic impact north of $10 million for the city.

Unfortunately, much of what Visit Kingsport normally does on a day-to-day basis simply didn’t happen last year. Like everything else in 2020, COVID-19 was to blame. Business travel ground to a halt and sporting events were either postponed or canceled outright.

Jud Teague, the executive director of Visit Kingsport, recently told the Board of Mayor and Aldermen that 2020 was one of the toughest years for the organization.

“The main stuff we have is in March, April and May and that’s when everything got really stupid last year,” Teague said. “We basically canceled all AAU (events), colleges were mostly in, and we probably had two or three events during the same the time frame.”

So far this year, Visit Kingsport has had 16 sporting events with an estimated $8 million economic impact to the city.

“We’ve pretty much had the same events, but they were in a different time of the year. A lot of stuff got pushed back and those should go back to their slot as normal this year,” Teague said.

On tap for this summer are the Kingsport Axmen baseball season, the Marucci Wood Bat Classic, the USSSA World Series, Fun Fest, and the Twilight Alive concert series. In the fall, expect to see the Wing Fling and Racks by the Tracks in September, NAIA volleyball and basketball in November and the Christmas parade in early December.

“My prediction was that by July 1 we would open our market back up to full participation. Once the vaccine rolled out and people started taking it, we just picked a date and drew line in the sand,” Teague said. “It just so happened the federal government wanted it to be that day, so that helped us out.”

GETTING BACK TO NORMAL

With people living under quarantine for the better part of the year and parts of the country dealing with more onerous restrictions than others, it’s safe to say most folks were eager to get back to normal once the vaccines became readily available.

Concerts, stadiums and restaurants have opened back up, people are flying more, and most everyone wants life to go back to normal.

When it comes to meetings and conventions, Visit Kingsport already has a number of high-profile events booked for 2021. All of these are 500-plus room nights:

Lara Potter, associate executive director of Visit Kingsport, said she was not feeling confident about the outlook for the year just two and a half months ago.

“I was a little concerned about the meetings and convention side (of our business),” Potter said. “We went to Nashville about a month ago to sit down and talk to meeting planners about what they’re getting a feeling for. The feeling was positive, they’re ready to get going, and that’s good news for us.”

Teague added that people are starting to call Visit Kingsport and reschedule events that were either canceled or postponed due to the pandemic. Fall is going to be a very busy time, he said.

“Our travel schedule in the fall is going to be packed from September to November, out recruiting people. I plan for us to be on the road two to three weeks out of the month,” Teague said.

Editor’s note: This is the first in a series of Teacher Spotlight articles about educators nominated by principals in and around Kingsport.

Her previous experience includes teaching fifth grade literacy for many years at Roosevelt as well as pre-K classes, Wright said.

“Mrs. Harrison is a very caring teacher who sees to the needs of her students and believes the foundation for teaching is the relationships created with students,” Wright said.

“She goes above and beyond to get to know her students as individuals and easily relates to them on their level,” Wright added.

“Over the years, many students with behavioral or other challenges have found success and confidence because of her commitment to make a difference in their lives. Additionally, Mrs. Harrison is a strong leader among her colleagues.

“She is constantly seeking to learn and improve her craft of teaching and stands as a role model for other teachers to follow,” Wright noted.

“She spends very long hours working in her classroom trying to make the best lessons possible for her students and is often the first teacher to arrive and last teacher to leave each day,” Wright said.

“Mrs. Harrison has served as a mentor for new teachers in our building as well and has always been willing to share her knowledge and secrets with new teachers,” he said.

This is a vide of Roosevelt Elementary Schools teacher Marti Harrison teaching in the classroom.

Teacher Marti Harrison in the classroom