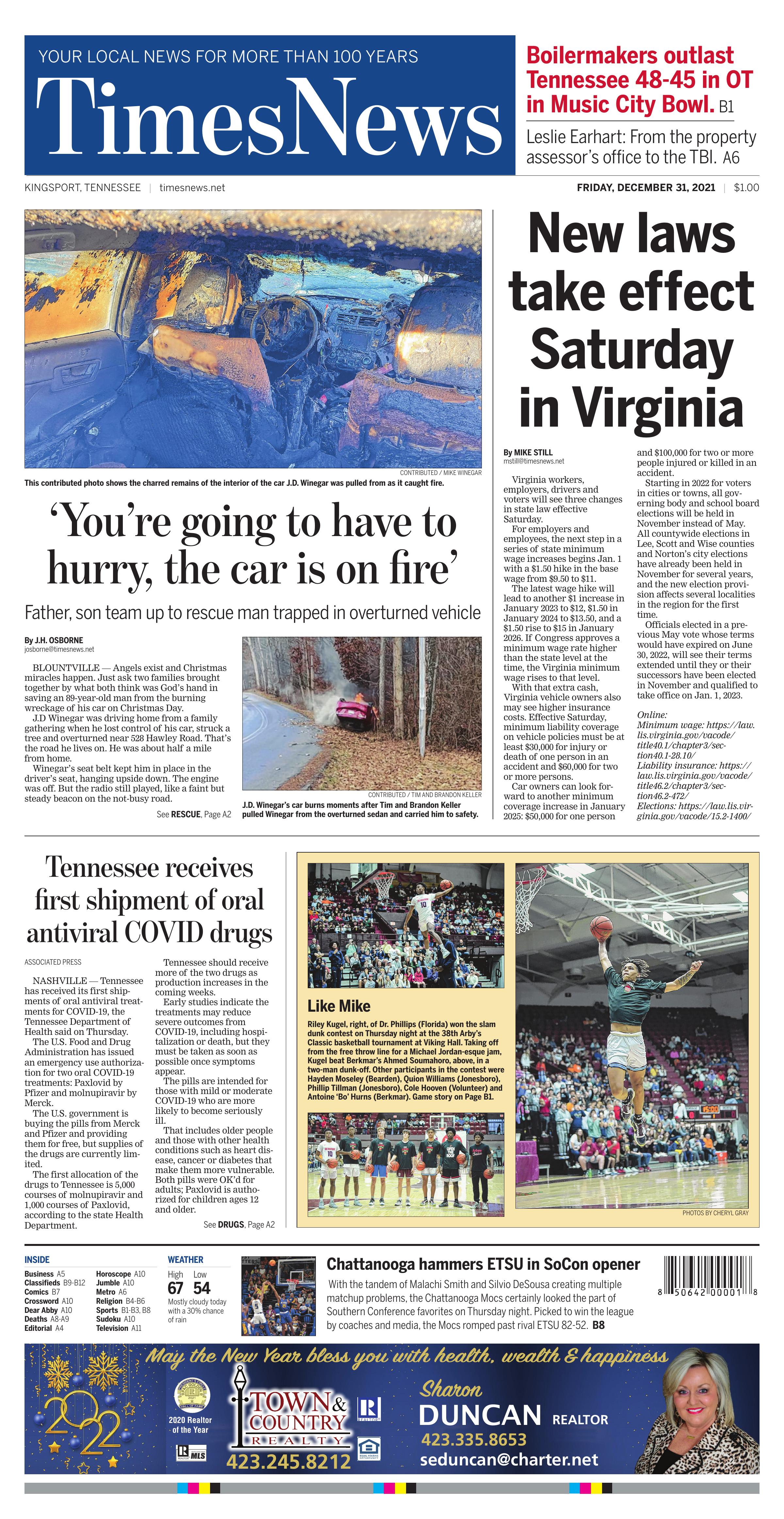 This contributed photo shows the charred remains of the interior of the car J.D. Winegar was pulled from as it caught fire.

J.D. Winegar’s car burns moments after Tim and Brandon Keller pulled Winegar from the overturned sedan and carried him to safety.

BLOUNTVILLE — Angels exist and Christmas miracles happen. Just ask two families brought together by what both think was God’s hand in saving an 89-year-old man from the burning wreckage of his car on Christmas Day.

J.D Winegar was driving home from a family gathering when he lost control of his car, struck a tree and overturned near 528 Hawley Road. That’s the road he lives on. He was about half a mile from home.

Winegar’s seat belt kept him in place in the driver’s seat, hanging upside down. The engine was off. But the radio still played, like a faint but steady beacon on the not-busy road.

Tim, 62, told the Times News he first thought the car, off the road slightly in the woods, might have wrecked the night before and been abandoned there. But he stopped to make sure no one was in the car.

Tim and Brandon, 31, were on their way to pick up a friend to go deer hunting.

They weren’t on a set timeline and had left home before they otherwise would have after another of Tim’s sons they had been waiting on said he wouldn’t be able to make it.

“We come around the curve and I said ‘Oh my, look there,’ ” Tim said of the overturned sedan. “I pulled up beside it and got out and walked over to it.”

He touched a door and felt the vibrations made by the music on the radio.

“I knew then it had probably just happened,” Tim said. “I told my son to call 911 and said I was going to get the hatchet. I had a hatchet in the truck. I knelt down to the passenger side rear window and knocked it out, I got down on my knees and stuck my head in and said, ‘Is anybody in here?’ and J.D. said, ‘Yes.’ ”

Tim asked if anyone else was in the car and heard Winegar answer “no.”

“I went around to the driver’s side, sitting over against the woods and could see I’d never be able to get in that way,” Tim said. “I went to the back window and knocked it out and crawled in. I’m a big fellow and wasn’t able to get my hands on (Winegar).”

Tim told Brandon he’d have to be the one to crawl in the car and get Winegar loose and out.

“By that time we could see smoke coming from the car,” Brandon said. “I handed the phone (with 911 on the other end) to Dad.”

As he started into the car he realized that even with his average-size build it would be difficult to move quickly and navigate his way out if something did happen, “like if the vehicle caught fire.”

“As I slid in there I just kept saying ‘God help me. God help us. Give us time God. Help us God,’ ” Brandon said.

Winegar said he was stuck in his seat belt.

“I reached around best I could and my hand went almost immediately to the button to release his seatbelt, and he dropped down to the roof,” Brandon said.

That’s about the time Tim noticed the car was actually on fire.

“Dad said, very low so Mr. Winegar wouldn’t hear him, ‘Brandon, you’re going to have to hurry, the car is on fire.’ ” Brandon said. “I told him (Winegar), ‘Brother, I’m going to slide my hand under your face and pull. I pulled, but he didn’t come all the way. His arm was tangled in the seat belt and with one swipe of my hand that seat belt came off him, thank the Lord.”

Tim and Brandon carried Winegar down the road away from the car and looked back to see it “was engulfed.”

“Another 60 seconds and it would have been too late,” Tim said.

They called 911 back to report the fire. It had been six minutes between calls.

Tim said he’s not had any formal emergency response training, other than military service and a few previous experiences.

“I’m so glad my dad was there even though I was in the car,” Brandon said. “A lot of my dad’s wisdom was what saved that man, that and the good Lord. That was the biggest intervention of God I’ve ever seen in my life. After me and Dad got in the truck we just broke down in tears and we hugged each other because it was just beginning to dawn on us what had really happened.”

The Kellers haven’t seen Winegar in person again. Yet. But they’ve spoken with his son Mike Winegar and his daughter Pam Winegar Elliott, who have thanked them repeatedly.

On social media, Pam has posted that her dad continues to recover and did not have any broken bones.

And she describes Tim and Brandon as “the angels who were sent to rescue my Dad. We could never thank them enough for being brave enough to do what they did. Most people would have called 911 and watched but these men jumped into action and for that we will be forever grateful. Thank you for being our Christmas miracle Timothy Keller and Brandon Keller!”

In another post, Pam wrote, “What we’ve learned is that God is so good! He sent an Angel to my Dad.”

Brandon’s wife, Rachel Fritts Keller, also has posted about the rescue on social media, including “… there is a God!! This is the proof! Miracles happen and we were able to witness a miracle … a true CHRISTMAS MIRACLE!! If they were seconds later things would had been so different for that family.

“I’m so thankful that God saved that man’s life but also that he took care of my selfless husband and father-in-law as they were laying in the vehicle trying to get the man out. So many scenarios played in our minds but God took care of all 3 of them!”

According to the accident report on file with the Sullivan County Sheriff’s Office:

• Officers responded at 3:55 p.m. Christmas Day and found the Toyota “engulfed in flames with smoke bellowing out of the front of the car.”

• Emergency medical responders and firefighters were on the scene.

• The completed investigation indicated that based on his medical history the officer believed Winegar lost consciousness before losing control of the car, hitting the tree and overturning.

NASHVILLE — Tennessee has received its first shipments of oral antiviral treatments for COVID-19, the Tennessee Department of Health said on Thursday.

The U.S. Food and Drug Administration has issued an emergency use authorization for two oral COVID-19 treatments: Paxlovid by Pfizer and molnupiravir by Merck.

The U.S. government is buying the pills from Merck and Pfizer and providing them for free, but supplies of the drugs are currently limited.

The first allocation of the drugs to Tennessee is 5,000 courses of molnupiravir and 1,000 courses of Paxlovid, according to the state Health Department.

Tennessee should receive more of the two drugs as production increases in the coming weeks.

Early studies indicate the treatments may reduce severe outcomes from COVID-19, including hospitalization or death, but they must be taken as soon as possible once symptoms appear.

The pills are intended for those with mild or moderate COVID-19 who are more likely to become seriously ill.

That includes older people and those with other health conditions such as heart disease, cancer or diabetes that make them more vulnerable. Both pills were OK’d for adults; Paxlovid is authorized for children ages 12 and older.

The Tennessee Department of Health is coordinating with Walmart pharmacies to distribute the treatments.

Both drugs require a prescription.

The new antiviral drugs come as Tennessee experiences a surge in new COVID-19 cases driven by the omicron variant.

The state reported more than 10,000 new cases on Wednesday and 38 new deaths, bringing the total death toll across Tennessee to 20,776.

While antivirals may help treat COVID-19, vaccination is the best way to prevent infection, according to the Health Department.

For answers to some common questions about COVID-19, read the AP’s Viral Questions series at https://apnews.com/hub/viral-questions.

For employers and employees, the next step in a series of state minimum wage increases begins Jan. 1 with a $1.50 hike in the base wage from $9.50 to $11.

With that extra cash, Virginia vehicle owners also may see higher insurance costs. Effective Saturday, minimum liability coverage on vehicle policies must be at least $30,000 for injury or death of one person in an accident and $60,000 for two or more persons.

Car owners can look forward to another minimum coverage increase in January 2025: $50,000 for one person and $100,000 for two or more people injured or killed in an accident.

Starting in 2022 for voters in cities or towns, all governing body and school board elections will be held in November instead of May. All countywide elections in Lee, Scott and Wise counties and Norton’s city elections have already been held in November for several years, and the new election provision affects several localities in the region for the first time.

Officials elected in a previous May vote whose terms would have expired on June 30, 2022, will see their terms extended until they or their successors have been elected in November and qualified to take office on Jan. 1, 2023. 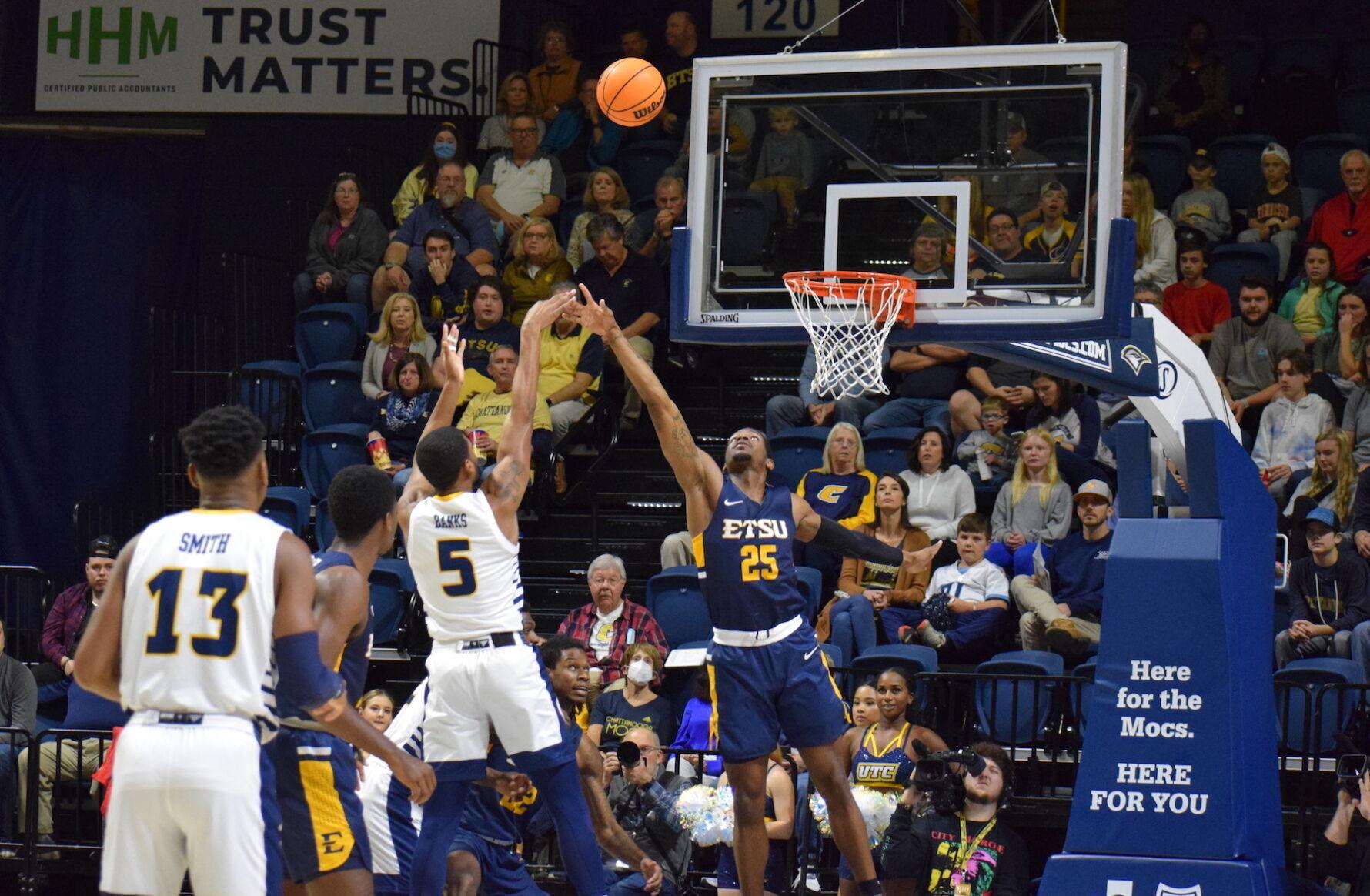