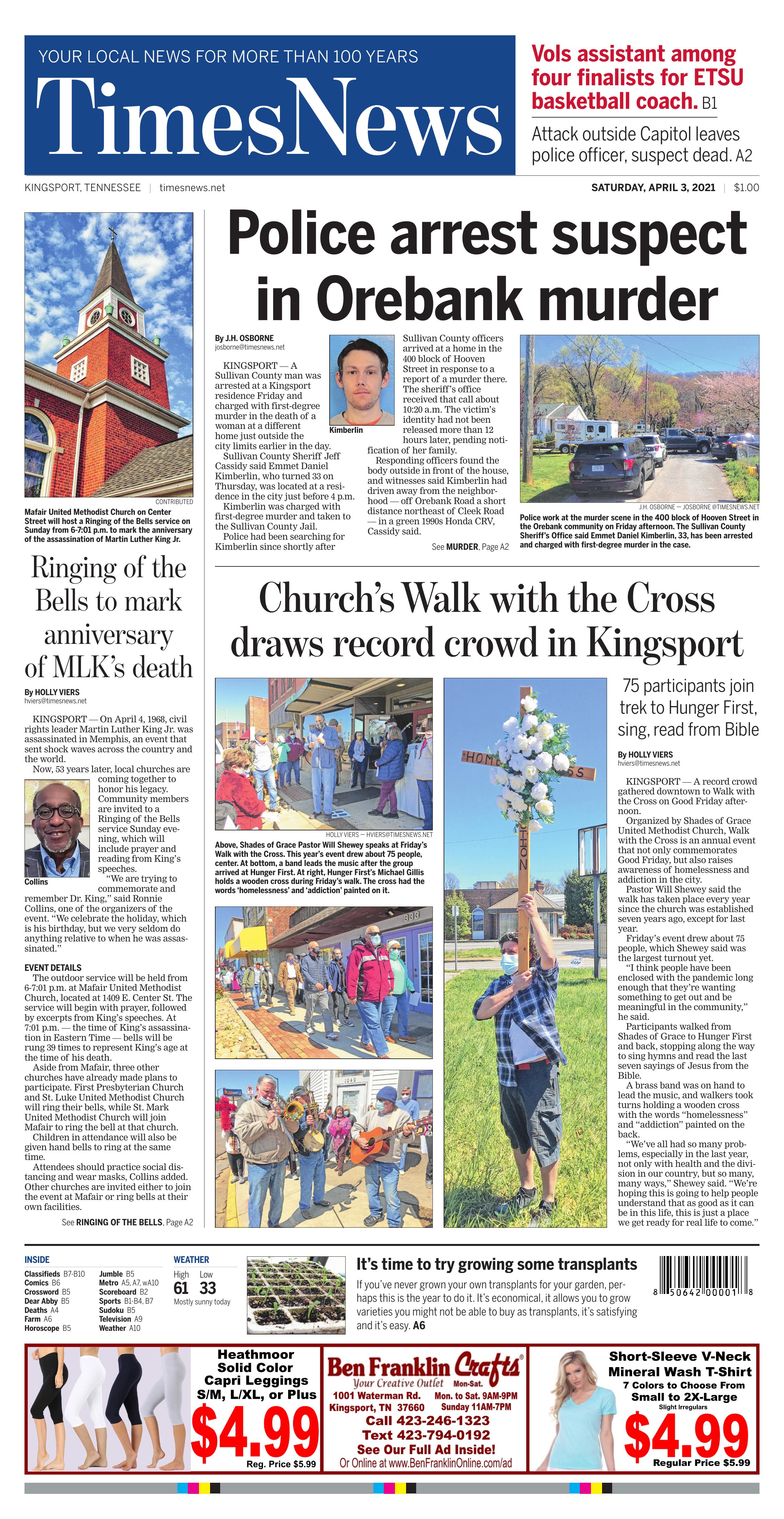 Police work at a murder scene in the 400 block of Hooven Street in the Orebank community on Friday afternoon. Emmet Kimberlin, 33, was arrested Friday afternoon and charged with the first-degree murder of his mother.

KINGSPORT — A Sullivan County man was arrested at a Kingsport residence Friday and charged with first-degree murder in the death of a woman at a different home just outside the city limits earlier in the day.

Sullivan County Sheriff Jeff Cassidy said Emmet Daniel Kimberlin, who turned 33 on Thursday, was located at a residence in the city just before 4 p.m.

Kimberlin was charged with first-degree murder and taken to the Sullivan County Jail.

Police had been searching for Kimberlin since shortly after Sullivan County officers arrived at a home in the 400 block of Hooven Street in response to a report of a murder there. The sheriff’s office received that call about 10:20 a.m. The victim’s identity had not been released more than 12 hours later, pending notification of her family.

Responding officers found the body outside in front of the house, and witnesses said Kimberlin had driven away from the neighborhood — off Orebank Road a short distance northeast of Cleek Road — in a green 1990s Honda CRV, Cassidy said.

The sheriff’s office released a booking photo of Kimberlin from a prior arrest in an effort to seek public assistance in locating him.

The public was warned not to approach Kimberlin, but to call the sheriff’s office or 911.

Speaking to reporters at the scene at about 3 p.m., Cassidy said that a domestic situation between the victim and Kimberlin preceded the death and that the sheriff’s office had responded to calls at the residence in the past.

As of 11 p.m. Friday, no further information had been released regarding the homicide because the investigation is ongoing.

Will Shewey speaks at Friday's "Walk with the Cross."

KINGSPORT — A record crowd gathered downtown to Walk with the Cross on Good Friday afternoon.

Organized by Shades of Grace United Methodist Church, Walk with the Cross is an annual event that not only commemorates Good Friday, but also raises awareness of homelessness and addiction in the city.

Pastor Will Shewey said the walk has taken place every year since the church was established seven years ago, except for last year.

Friday’s event drew about 75 people, which Shewey said was the largest turnout yet.

“I think people have been enclosed with the pandemic long enough that they’re wanting something to get out and be meaningful in the community,” he said.

Participants walked from Shades of Grace to Hunger First and back, stopping along the way to sing hymns and read the last seven sayings of Jesus from the Bible.

A brass band was on hand to lead the music, and walkers took turns holding a wooden cross with the words “homelessness” and “addiction” painted on the back.

“We’ve all had so many problems, especially in the last year, not only with health and the division in our country, but so many, many ways,” Shewey said. “We’re hoping this is going to help people understand that as good as it can be in this life, this is just a place we get ready for real life to come.”

Mafair United Methodist Church on Center Street will host a Ringing of the Bells service on Sunday from 6-7:01 p.m. to mark the anniversary of the assassination of Martin Luther King Jr.

KINGSPORT — On April 4, 1968, civil rights leader Martin Luther King Jr. was assassinated in Memphis, an event that sent shock waves across the country and the world.

Now, 53 years later, local churches are coming together to honor his legacy. Community members are invited to a Ringing of the Bells service Sunday evening, which will include prayer and reading from King’s speeches.

“We are trying to commemorate and remember Dr. King,” said Ronnie Collins, one of the organizers of the event. “We celebrate the holiday, which is his birthday, but we very seldom do anything relative to when he was assassinated.”

The outdoor service will be held from 6-7:01 p.m. at Mafair United Methodist Church, located at 1409 E. Center St. The service will begin with prayer, followed by excerpts from King’s speeches. At 7:01 p.m. — the time of King’s assassination in Eastern Time — bells will be rung 39 times to represent King’s age at the time of his death.

Children in attendance will also be given hand bells to ring at the same time.

Attendees should practice social distancing and wear masks, Collins added. Other churches are invited either to join the event at Mafair or ring bells at their own facilities.

“We’re always happy to commemorate Dr. King,” said Adam Love, pastor of Mafair United Methodist Church. “We’re happy to be invited, happy we can offer space and do what we can to host this and to be part of it.”

How it came together

Johnnie Mae Swagerty, director of New Vision Youth and head organizer of the service, said she was first encouraged to organize the event by someone from Elizabethton, which has held similar services.

“This is what Martin Luther King wanted: everybody to come together and fill your hearts with love, peace and unity,” Swagerty said. “By having this bell ringing, this brings peace to everybody, and then with the churches participating and ringing bells, they’re saying that all churches in the community can come together.”

Since she first started to plan the service, Swagerty said people have been eager to join in and honor King’s legacy. She added that she hopes the event will continue in the future, but with a board of church leaders at the helm.

“In all that we do, especially for myself for the last 20-some years with the parades and the marches for Dr. King, our theme has always been love,” Collins said. “This is an opportunity where we can come together and commemorate a great man — not just a great Black man, but a great man, a great American who made such an impact.” 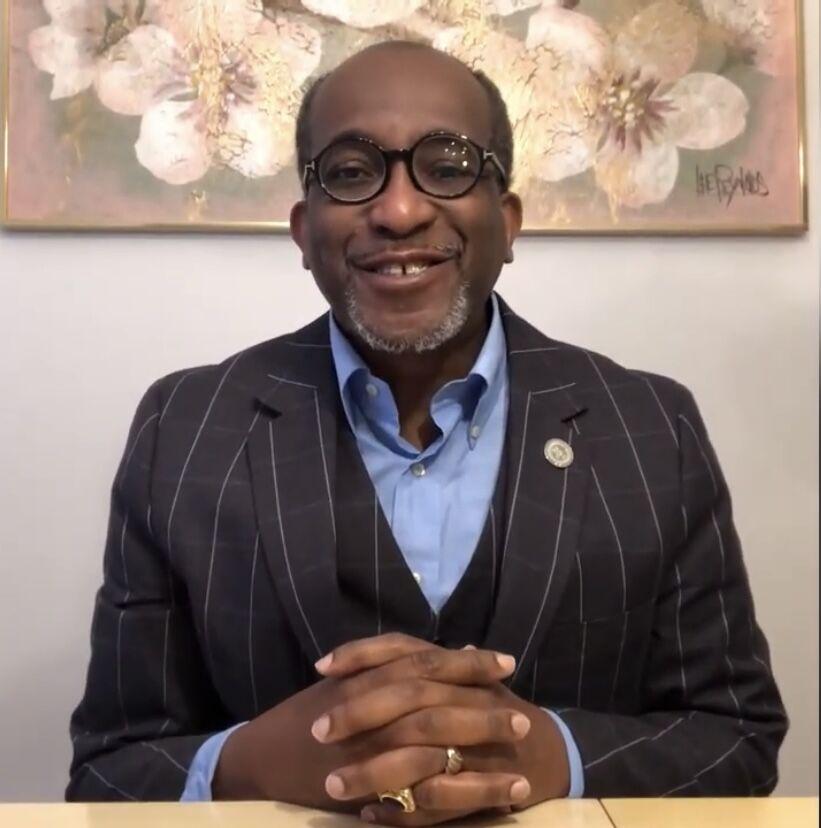 Bishop Ronnie Collins speaks at the beginning of the "virtual" parade video, which highlights the Rev. Dr. Martin Luther King, Jr. holiday parades of the past 20 years in Kingsport.

Video: Walk with the Cross 1

Video: Walk with the Cross 2