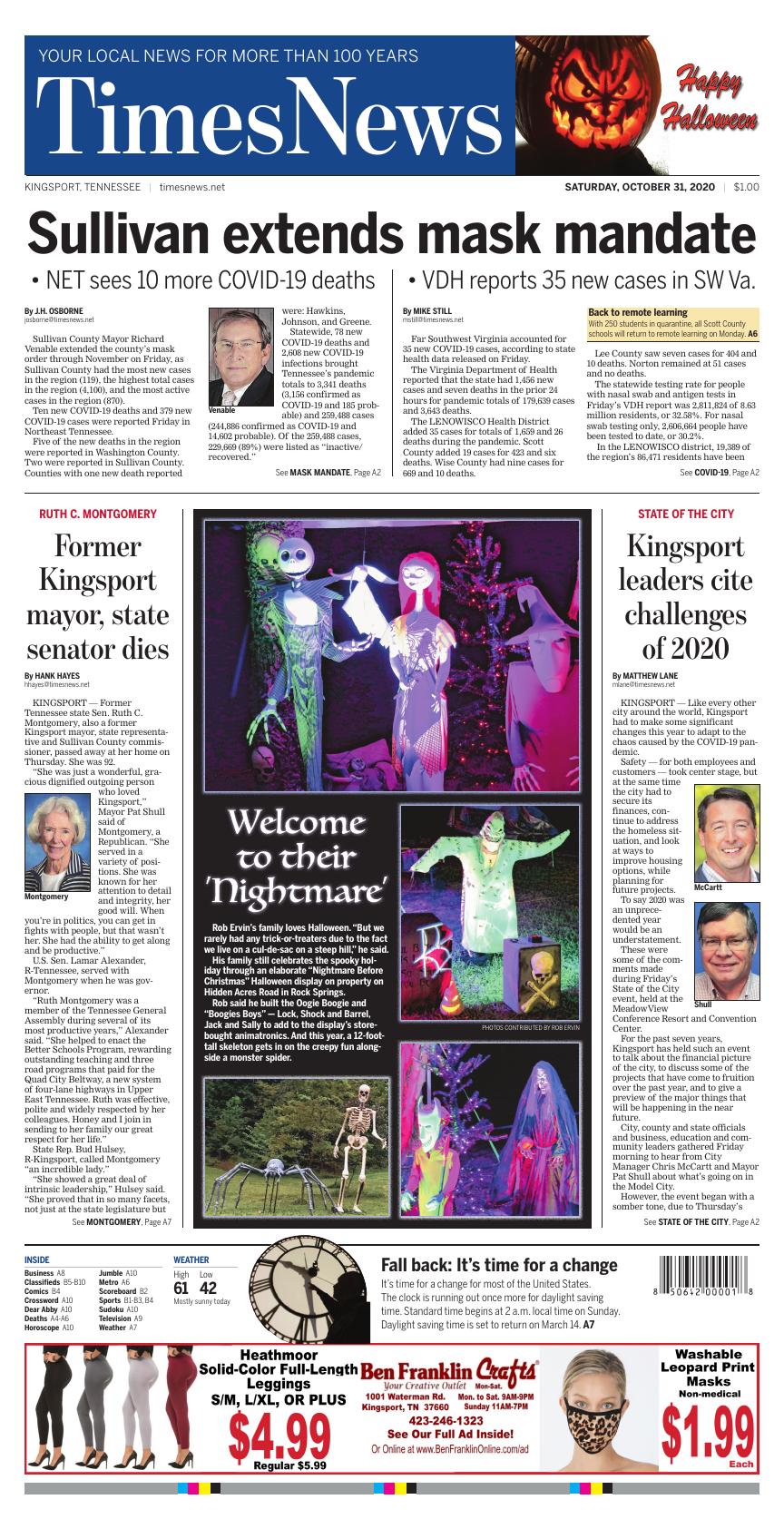 The 379 new cases brought the area’s total cases to 14,735 (including confirmed, probable, and inactive/recovered cases).

Washington County had 110 new cases (3,877 total), and the five new deaths brought its total deaths to 58, the highest in the region.

Numbers for the region’s other six counties:

New case numbers were based on 24,149 new test results statewide, compared to the day before, with a positive rate of 10.58%.

Over the past seven days, the average positive rate for tests in Sullivan was 17.1%.

Rob Ervin’s family loves Halloween. “But we rarely had any trick-or-treaters due to the fact we live on a cul-de-sac on a steep hill,” he said.

His family still celebrates the spooky holiday through an elaborate “Nightmare Before Christmas” Halloween display on property on Hidden Acres Road in Rock Springs.

Rob said he built the Oogie Boogie and “Boogies Boys” — Lock, Shock and Barrel, Jack and Sally to add to the display’s store-bought animatronics. And this year, a 12-foot-tall skeleton gets in on the creepy fun alongside a monster spider.

The Virginia Department of Health reported that the state had 1,456 new cases and seven deaths in the prior 24 hours for pandemic totals of 179,639 cases and 3,643 deaths.

The LENOWISCO Health District added 35 cases for totals of 1,659 and 26 deaths during the pandemic. Scott County added 19 cases for 423 and six deaths. Wise County had nine cases for 669 and 10 deaths.

Lee County saw seven cases for 404 and 10 deaths. Norton remained at 51 cases and no deaths.

VDH will shut down the COVID-19 dashboard from 8 a.m. to 6 p.m. Saturday for maintenance.

In Friday’s weekly school outbreak listing, Gate City Middle School was reported as having an in-progress outbreak starting Oct. 21 with an unspecified number of cases.

The seven-day average rate of positive PCR test results in the LENOWISCO district in Friday’s report rose from 14.6% to 16.2. The statewide positivity rate rose from 5.3% to 5.4%.

According to Friday’s VDH online pandemic measures dashboard, cases in the far southwest region of Virginia — including the LENOWISCO Health District — were ranked as rising after a 39-day increase in cases. The far southwest region ranking for percent positivity of COVID-19 testing results remained increasing based on a 19-day rise in that measure.

“She was just a wonderful, gracious dignified outgoing person who loved Kingsport,” Mayor Pat Shull said of Montgomery, a Republican. “She served in a variety of positions. She was known for her attention to detail and integrity, her good will. When you’re in politics, you can get in fights with people, but that wasn’t her. She had the ability to get along and be productive.”

U.S. Sen. Lamar Alexander, R-Tennessee, served with Montgomery when he was governor.

“Ruth Montgomery was a member of the Tennessee General Assembly during several of its most productive years,” Alexander said. “She helped to enact the Better Schools Program, rewarding outstanding teaching and three road programs that paid for the Quad City Beltway, a new system of four-lane highways in Upper East Tennessee. Ruth was effective, polite and widely respected by her colleagues. Honey and I join in sending to her family our great respect for her life.”

“She showed a great deal of intrinsic leadership,” Hulsey said. “She proved that in so many facets, not just at the state legislature but in city government and her personal life. I hate to lose her. My heart goes out to her family.”

Miles Burdine, president and CEO of the Kingsport Chamber of Commerce, held a moment of silence for the late Pal’s Sudden Service founder Pal Barger and Montgomery during the State of the City address Friday morning at the MeadowView Conference Resort and Convention Center.

“Both of those people were absolutely amazing individuals who dedicated their lives to serving others, who made many positive things happen for all of us,” Burdine said. “They loved this place and Kingsport loved them back.”

KINGSPORT — Like every other city around the world, Kingsport had to make some significant changes this year to adapt to the chaos caused by the COVID-19 pandemic.

Safety — for both employees and customers — took center stage, but at the same time the city had to secure its finances, continue to address the homeless situation, and look at ways to improve housing options, while planning for future projects.

To say 2020 was an unprecedented year would be an understatement.

These were some of the comments made during Friday’s State of the City event, held at the MeadowView Conference Resort and Convention Center.

For the past seven years, Kingsport has held such an event to talk about the financial picture of the city, to discuss some of the projects that have come to fruition over the past year, and to give a preview of the major things that will be happening in the near future.

City, county and state officials and business, education and community leaders gathered Friday morning to hear from City Manager Chris McCartt and Mayor Pat Shull about what’s going on in the Model City.

However, the event began with a somber tone, due to Thursday’s passing of Pal Barger and former Kingsport Mayor Ruth Montgomery.

“Both of those people were absolutely amazing individuals who dedicated their lives to serving others, who made many positive things happen for all of us,” said Miles Burdine, president and CEO of the Kingsport Chamber of Commerce. “They loved this place and Kingsport loved them back.”

A YEAR OF CHALLENGES

Shull kicked off the hour-long presentation by talking about some of the challenges Kingsport faced in 2020, including:

• Ballad Health protest: “When I came on board, we had a protest taking place. They have a right to protest, but they don’t have a right to block the right of way, so we had to work through that situation.”

• Homelessness: “I would have to say, don’t believe everything you read on social media. The city has done more for the homeless since Chris became city manager than any time in the past history. It’s not our core mission, but we have gone the extra step to address the issue.”

• COVID-19: “It’s causing us to rethink a lot of things, how to do basic things, but do them safely. We’re trying to be as safe as possible.”

• Domtar: “We negotiated a win-win agreement between the city and the company. We wanted to preserve jobs and keep a vital industry here.”

FROM THE CITY MANAGER

“It’s hard not to have a conversation about 2020 and not talk about the pandemic,” McCartt said as he began his discussion. “As we moved through the first quarter of the calendar year, the reality that the virus was coming our way was apparent. It was something we had never seen before.”

One of the first things Kingsport did was to take measures to protect both its employees and its customers, McCartt said. Facilities were temporarily closed, protective barriers were installed at face-to-face locations, and many services were provided by appointment, remotely or online.

“A lot of the measures we put in place in those early days ... to reopen many of our facilities became used as best practices across the state for how to go through the shutdown and reopening,” McCartt noted.

Kingsport knew it would be taking a financial hit earlier this year due to the shutdown and made adjustments accordingly, including freezing all positions, eliminating all travel, making expenditures mission-critical, and delaying all capital expenditures.

McCartt said the city was able to recapture $3.8 million in the fourth quarter of 2020.

McCartt gave a rundown of the major capital projects that were either completed or showed significant progress this year.

• Main Street: “I’m pleased to tell you the Main Street project is moving forward. It’s a $6 million project that we’ve been working on for quite some time.”

• New city hall: “Very soon we’ll call 415 Broad St. home. We had hoped to be in there in December, but that’s now been pushed to late January or early February. It will streamline our operations and improve customer interface.”

• New outdoor pool: “It was not the year to open a new public pool, but nonetheless we did. It was our No. 1 requested item. We continue to reinvest in projects that make Kingsport unique, and it furthers our effort in sports tourism.”

• Miracle Field: “I challenge you to find a project that’s touched the hearts of more people than this.”

• Greenbelt extension: “For 30 years we’ve been working on (the Greenbelt). We’ll cut the ribbon on the new section next week.”

• Infrastructure: “This past year we’ve put $500,000 into our sidewalks, replaced over 162 handicapped ramps and continue to push the needle when it comes to paving.”

He closed by looking at some of the projects on tap for 2021, such as the pedestrian bridge and new skate park at Brickyard Park, the push to add new housing options downtown and elsewhere in the city, the master plan for the Parks and Recreation Department, and the continued focus on infrastructure.

“I truly believe that 2021, despite all of the things going on, will be a positive year for Kingsport,” McCartt said. 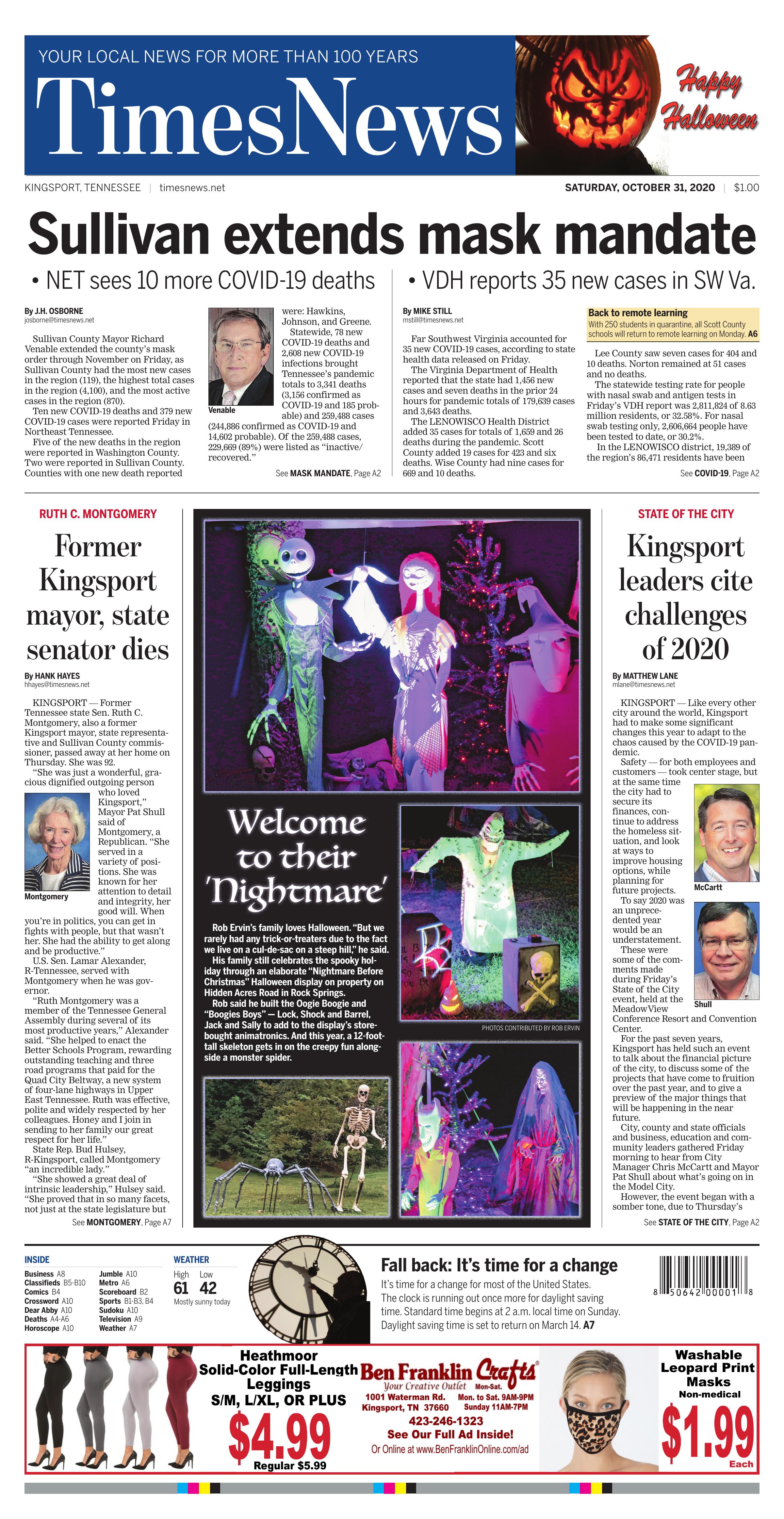