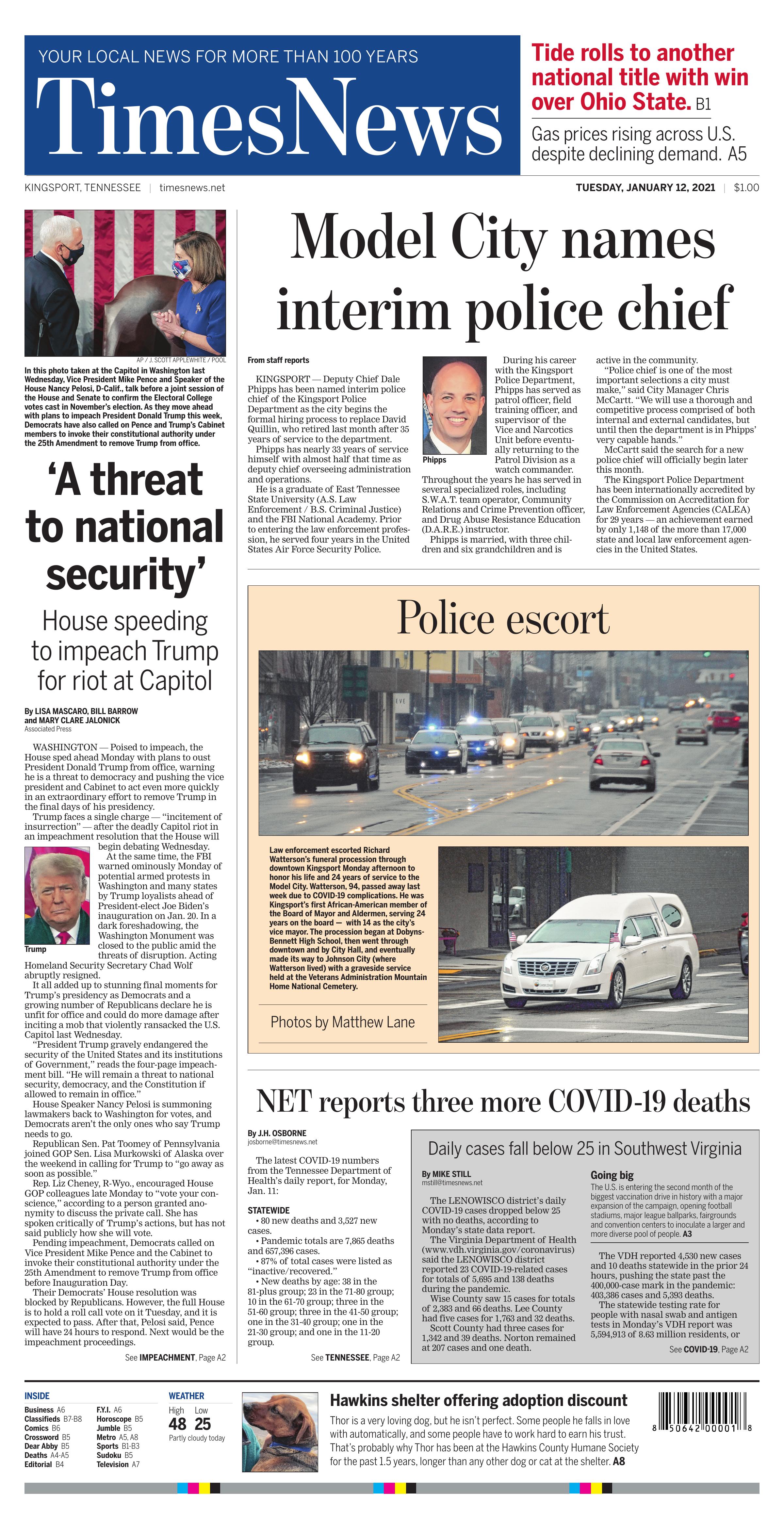 KINGSPORT — Deputy Chief Dale Phipps has been named interim police chief of the Kingsport Police Department as the city begins the formal hiring process to replace David Quillin, who retired last month after 35 years of service to the department.

Phipps has nearly 33 years of service himself with almost half that time as deputy chief overseeing administration and operations.

He is a graduate of East Tennessee State University (A.S. Law Enforcement / B.S. Criminal Justice) and the FBI National Academy. Prior to entering the law enforcement profession, he served four years in the United States Air Force Security Police.

During his career with the Kingsport Police Department, Phipps has served as patrol officer, field training officer, and supervisor of the Vice and Narcotics Unit before eventually returning to the Patrol Division as a watch commander. Throughout the years he has served in several specialized roles, including S.W.A.T. team operator, Community Relations and Crime Prevention officer, and Drug Abuse Resistance Education (D.A.R.E.) instructor.

Phipps is married, with three children and six grandchildren and is active in the community.

“Police chief is one of the most important selections a city must make,” said City Manager Chris McCartt. “We will use a thorough and competitive process comprised of both internal and external candidates, but until then the department is in Phipps’ very capable hands.”

McCartt said the search for a new police chief will officially begin later this month.

The Kingsport Police Department has been internationally accredited by the Commission on Accreditation for Law Enforcement Agencies (CALEA) for 29 years — an achievement earned by only 1,148 of the more than 17,000 state and local law enforcement agencies in the United States.

The latest COVID-19 numbers from the Tennessee Department of Health’s daily report, for Monday, Jan. 11:

• 87% of total cases were listed as “inactive/recovered.”

• Three new deaths and 205 new cases for the eight-county region.

• New deaths by county: two in Sullivan; and one in Washington.

Statewide: 16.93% of the 20,996 new test results reported on Monday by the Tennessee Department of Health.

Ballad Health: 32.2% over the past seven days, for the health system’s 21-county service area, including Northeast Tennessee and Southwest Virginia.

Members of the National Guard stand inside anti-scaling fencing that surrounds the Capitol complex, Sunday, Jan. 10, 2021, in Washington.

WASHINGTON — Poised to impeach, the House sped ahead Monday with plans to oust President Donald Trump from office, warning he is a threat to democracy and pushing the vice president and Cabinet to act even more quickly in an extraordinary effort to remove Trump in the final days of his presidency.

Trump faces a single charge — “incitement of insurrection” — after the deadly Capitol riot in an impeachment resolution that the House will begin debating Wednesday.

At the same time, the FBI warned ominously Monday of potential armed protests in Washington and many states by Trump loyalists ahead of President-elect Joe Biden’s inauguration on Jan. 20. In a dark foreshadowing, the Washington Monument was closed to the public amid the threats of disruption. Acting Homeland Security Secretary Chad Wolf abruptly resigned.

It all added up to stunning final moments for Trump’s presidency as Democrats and a growing number of Republicans declare he is unfit for office and could do more damage after inciting a mob that violently ransacked the U.S. Capitol last Wednesday.

“President Trump gravely endangered the security of the United States and its institutions of Government,” reads the four-page impeachment bill. “He will remain a threat to national security, democracy, and the Constitution if allowed to remain in office.”

House Speaker Nancy Pelosi is summoning lawmakers back to Washington for votes, and Democrats aren’t the only ones who say Trump needs to go.

Republican Sen. Pat Toomey of Pennsylvania joined GOP Sen. Lisa Murkowski of Alaska over the weekend in calling for Trump to “go away as soon as possible.”

Rep. Liz Cheney, R-Wyo., encouraged House GOP colleagues late Monday to “vote your conscience,” according to a person granted anonymity to discuss the private call. She has spoken critically of Trump’s actions, but has not said publicly how she will vote.

Pending impeachment, Democrats called on Vice President Mike Pence and the Cabinet to invoke their constitutional authority under the 25th Amendment to remove Trump from office before Inauguration Day.

Their Democrats’ House resolution was blocked by Republicans. However, the full House is to hold a roll call vote on it Tuesday, and it is expected to pass. After that, Pelosi said, Pence will have 24 hours to respond. Next would be the impeachment proceedings.

Pence has given no indication he is ready to proceed on a course involving the 25th Amendment.

He and Trump met late Monday for the first time since the Capitol attack, a senior administration official said.

Trump and Pence had a “good conversation” in the Oval Office discussing the week ahead, and they pledged to continue working for the remainder of their terms, said the official, who spoke on condition of anonymity to discuss the private meeting.

No member of the Cabinet has publicly called for Trump to be removed from office though the 25th Amendment.

As security tightened, Biden said Monday he was “not afraid” of taking the oath of office outside — as is traditionally done at the Capitol’s west steps, one of the areas where people stormed the building.

As for the rioters, Biden said, “It is critically important that there’ll be a real serious focus on holding those folks who engaged in sedition and threatening the lives, defacing public property, caused great damage — that they be held accountable.”

Biden said he’s had conversations with senators ahead of a possible impeachment trial, which some have worried would cloud the opening days of his administration.

Senate Democratic leader Chuck Schumer was exploring ways to immediately convene the Senate for the trial as soon as the House acts, though Republican leader Mitch McConnell would need to agree.

The president-elect suggested splitting the Senate’s time, perhaps “go a half day on dealing with impeachment, a half day on getting my people nominated and confirmed in the Senate, as well as moving on the package” for more COVID relief.

As Congress briefly resumed Monday, an uneasiness swept government. More lawmakers tested positive for COVID-19 after sheltering during the siege. And new security officials were quickly installed after the Capitol police chief and others were ousted in fallout from the attack on the iconic dome of democracy. Some GOP lawmakers, including Missouri Sen. Josh Hawley, faced public blowback for their efforts on the day of the riot trying to overturn Biden’s election.

House Majority Leader Steny Hoyer, D-Md., offered the 25th Amendment resolution during Monday’s brief session. It was blocked by Rep. Alex Mooney, R-W.Va., as other GOP lawmakers stood by him.

Pelosi said the Republicans were enabling Trump’s “unhinged, unstable and deranged acts of sedition to continue. Their complicity endangers America, erodes our Democracy, and it must end.”

However, House Republican leader Kevin McCarthy, a Trump ally, said in a letter to colleagues that “impeachment at this time would have the opposite effect of bringing our country together.”

He said he would review possible censure of the president. But House Republicans are split and a few may vote to impeach.

The impeachment bill from Reps. David Cicilline of Rhode Island, Ted Lieu of California, Jamie Raskin of Maryland and and Jerrold Nadler of New York draws from Trump’s own false statements about his election defeat to Biden.

Judges across the country, including some nominated by Trump, have repeatedly dismissed cases challenging the election results, and Attorney General William Barr, a Trump ally, has said there was no sign of widespread fraud.

The impeachment legislation also details Trump’s pressure on state officials in Georgia to “find” him more votes, as well as his White House rally ahead of the Capitol siege, in which he encouraged thousands of supporters last Wednesday to “fight like hell” and march to the building.

The mob overpowered police, broke through security lines and windows and rampaged through the Capitol, forcing lawmakers to scatter as they were finalizing Biden’s victory over Trump in the Electoral College.

While some have questioned impeaching the president so close to the end of his term, Democrats and others argue he must be held accountable and prevented from holding future public office. He would be the only president twice impeached.

House Democrats have been considering a strategy to delay for 100 days sending articles of impeachment to the Senate for trial, to allow Biden to focus on other priorities.

There is precedent for pursuing impeachment after an official leaves office. In 1876, during the Ulysses Grant administration, War Secretary William Belknap was impeached by the House the day he resigned, and the Senate convened a trial months later. He was acquitted.

Sen. Ben Sasse, R-Neb., said he would take a look at any articles that the House sent over. Rep. Adam Kinzinger, R-Ill., a frequent Trump critic, said he would “vote the right way” if the matter were put in front of him.

Cicilline, leader of the House effort, tweeted Monday that “we now have the votes to impeach,” including 213 cosponsors and private commitments.

The LENOWISCO district’s daily COVID-19 cases dropped below 25 with no deaths, according to Monday’s state data report.

The Virginia Department of Health (www.vdh.virginia.gov/coronavirus) said the LENOWISCO district reported 23 COVID-19-related cases for totals of 5,695 and 138 deaths during the pandemic.

Scott County had three cases for 1,342 and 39 deaths. Norton remained at 207 cases and one death.

The seven-day average rate of positive PCR test results in the LENOWISCO district in Monday’s report decreased from 23% to 22.9%. The statewide seven-day positivity rate dropped from 16.7% to 16.7%.

A 46th outbreak was reported in the LENOWISCO Health District Monday in an unidentified congregate living setting.

Red Onion State Prison had 27 inmate cases and dropped two cases to eight active staff/contractor cases on Monday, according to the Virginia Department of Corrections.

According to Monday’s VDH pandemic measures dashboard, daily case incidence in the far southwest region of Virginia — including the LENOWISCO Health District — was ranked as increasing after a 14-day rise in daily case rates. The far southwest region ranking for percent positivity of COVID-19 testing results was classified as fluctuating based on an overall 11-day decrease in that measure. 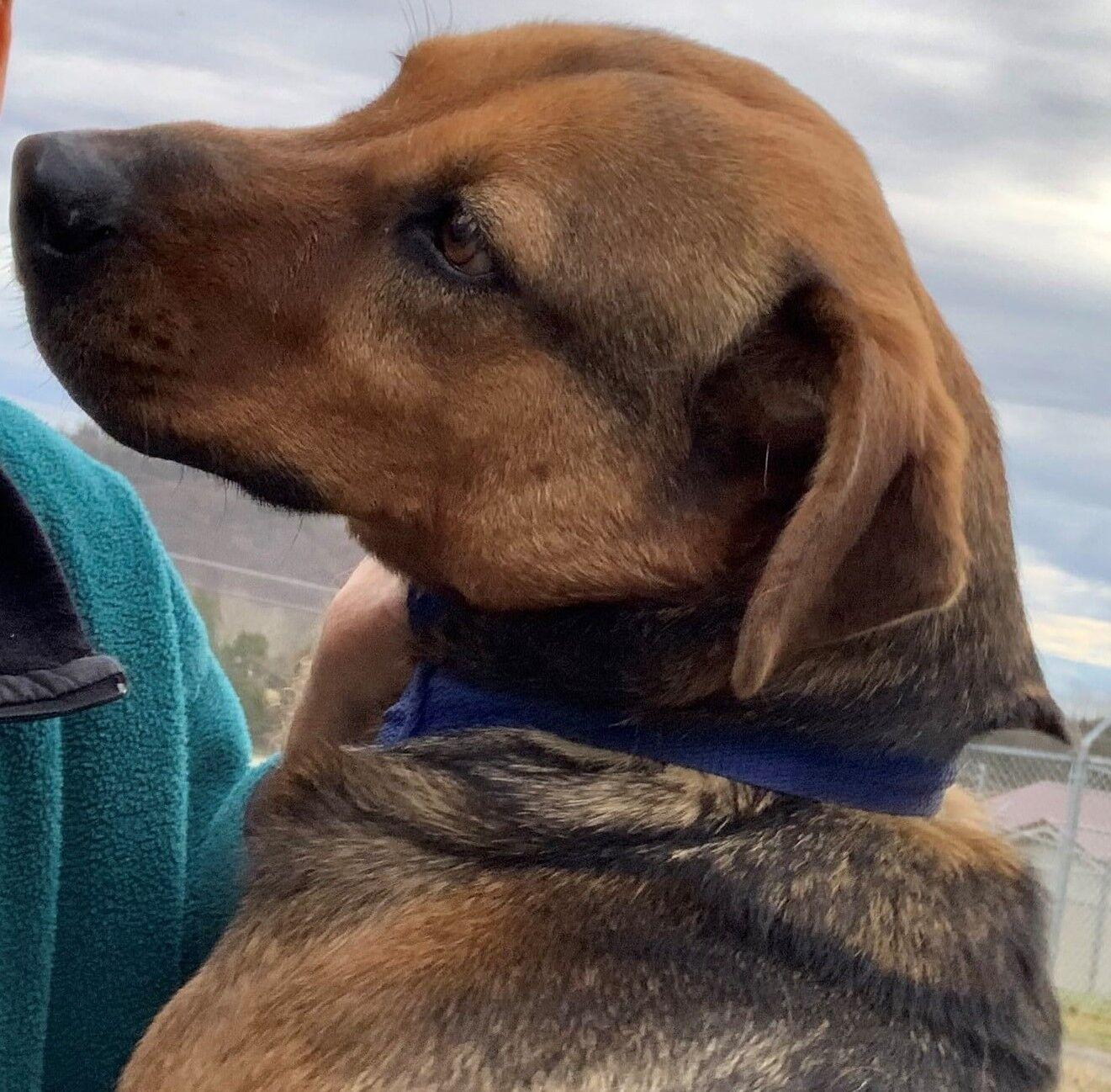 Thor, a fixed 2-3 year old Shepherd mix that will require some extra patience and attention. He’s been at the Hawkins County Humane Society for the past 1.5 years, longer than any other dog or cat at the shelter.