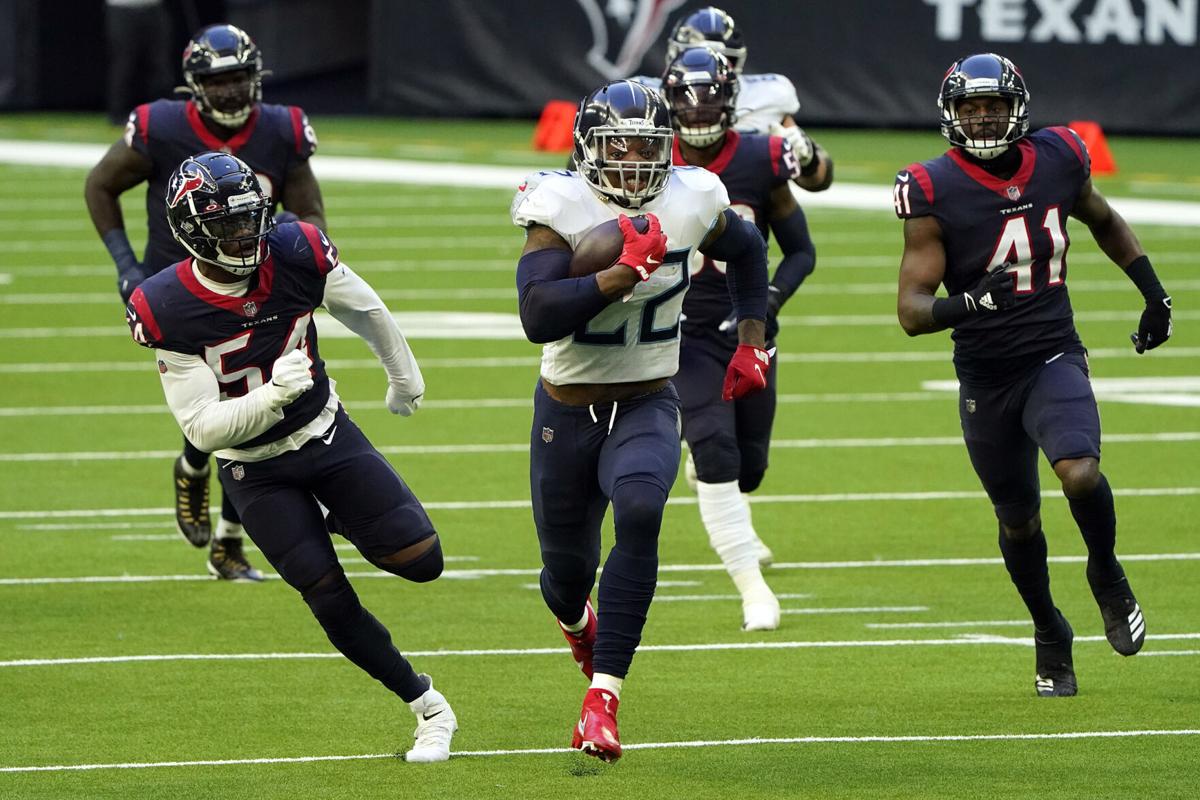 Tennessee Titans running back Derrick Henry (22) takes off on a touchdown run as the Houston Texans’ Jacob Martin (54) and Zach Cunningham (41) give chase during the first half Sunday in Houston. Henry rushed for a career-high 250 yards and finished as the NFL’s rushing champion for a second consecutive season. 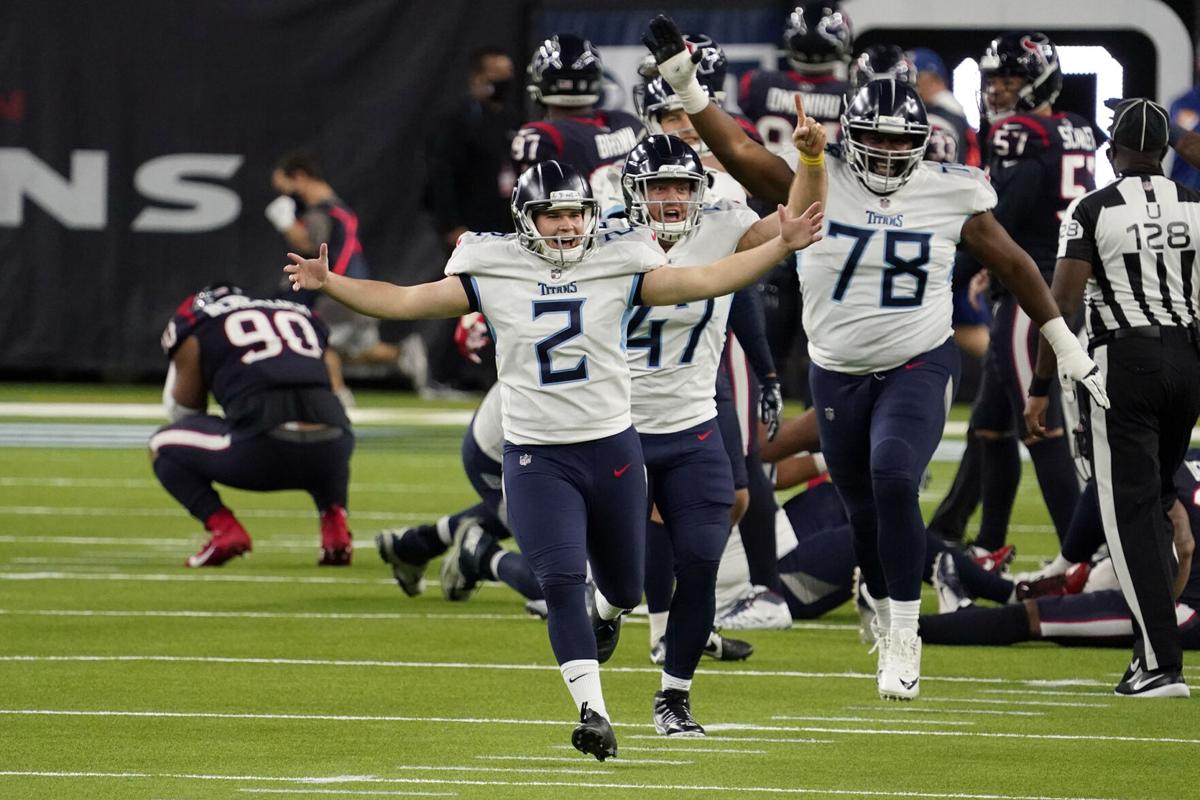 Tennessee Titans running back Derrick Henry (22) takes off on a touchdown run as the Houston Texans’ Jacob Martin (54) and Zach Cunningham (41) give chase during the first half Sunday in Houston. Henry rushed for a career-high 250 yards and finished as the NFL’s rushing champion for a second consecutive season.

HOUSTON — Tennessee’s Derrick Henry ran into the NFL record books Sunday with the best game of his career.

But it was a lucky bounce that gave the Titans a win over the Houston Texans and their first AFC South title since 2008.

Henry ran for a career-high 250 yards to surpass 2,000 yards rushing this season and rookie Sam Sloman’s 37-yard field goal bounced off the upright and through for the 41-38 victory.

“I told them I’m fortunate and proud to be their coach,” Tennessee coach Mike Vrabel said. “They don’t quit. They don’t give in and I know there’s times where you could. ... I think unfortunately that happens sometimes in this league. They didn’t. They battled back.”

The Titans (11-5) needed the air game to set up Sloman’s winner, though: a 52-yard reception by A.J. Brown moments after a 51-yard field goal by Houston tied it with 18 seconds left.

“In the end, we had some time and we executed and Ryan (Tannehill) and A.J. hooked up,” Vrabel said. “There’s a lot to fix and correct. We’re not going to apologize for winning 11 games in the National Football League.”

“It’s a legacy accomplishment,” safety Kevin Byard said. “Obviously very disappointed at how we finished the game defensively ... but at the end of the day, I’m not going to sit here and not celebrate winning the division.”

Henry finished the regular season with a franchise-record 2,027 rushing yards to become the eighth player in NFL history to run for 2,000 yards. He passed Chris Johnson, who had 2,006 yards in 2009.

Henry had touchdown runs of 52 and 6 yards in his third straight 200-yard rushing game against the Texans.

“I got it. I did it,” he said of joining the elite 2,000-yard rushing club. “But I ... wasn’t pressing for it, just wanted to be able to win the game as a team and make to the playoffs, win the division.”

Henry entered the game having already secured his second straight rushing title, making him the first player to lead the league in rushing in consecutive seasons since Hall of Famer LaDaianian Tomlinson in 2006-07. Second-place rusher Dalvin Cook of Minnesota entered the week with 1,557 yards rushing and missed Sunday’s game after the death of his father.

Tennessee had a three-point lead early in the fourth quarter when Tannehill was sacked on fourth-and-11 to give the Texans the ball at their 37. Houston took its first lead when Deshaun Watson found Pharaoh Brown on a 7-yard pass that made it 35-31 with about 10 minutes remaining.

The Titans then capped a long drive with a 5-yard TD run by Tannehill with less than two minutes remaining. Henry reached 2,000 yards with a 6-yard run early in that drive.

Tannehill threw for 216 yards and a touchdown and ran for two more scores. Watson threw for 365 yards and three touchdowns with an interception as the Texans (4-12) dropped their fifth in a row.

Watson’s big day gave him a career-best 4,823 yards passing this season to move him past Kansas City’s Patrick Mahomes (4,740), who didn’t play Sunday, for first in the NFL.

Henry’s 6-yard run extended the lead to 24-9 early in the third quarter. But Watson connected with Brandin Cooks on a 38-yard TD pass to cut the lead to 24-15 after a missed extra point.

Tannehill’s 5-yard scramble made it 31-15 later in the third. Henry had a 45-yard run two plays earlier to set up the score.

Cooks grabbed a 20-yard TD reception on Houston’s next drive, but the 2-point conversion failed, leaving Houston down 31-21. Henry fumbled on Tennessee’s next drive at its 28. Watson’s 1-yard TD pass to David Johnson cut the lead to 31-28 late in the third.

Houston defensive end J.J. Watt is under contract for one more season, but has said he doesn’t want to be part of a rebuilding team, leading to speculation that he could be traded this offseason.

The three-time NFL Defensive Player of the Year reflected on the possibility that Sunday could be his last time playing in front of the fans he’s loved for a decade.

“I’ve certainly considered it but... there’s too many unknowns to really know,” he said. “But if it is, it’s unfortunate that it wasn’t in front of a full stadium ... but I hope they know how I feel about them and how thankful I am and I’ve tried to do everything I possibly can and give everything I possibly have.”

The Titans host Baltimore on Sunday in the wild-card round.

The Texans begin an offseason when they must hire a coach and general manager.

A few facts and figures about Titans running back Derrick Henry eclipsing the 2,000-yard rushing mark for the season.

• He finished the regular season with a franchise-record 2,027 yards.

• He is the first player to lead the league in rushing in consecutive seasons since LaDaianian Tomlinson in 2006-07.