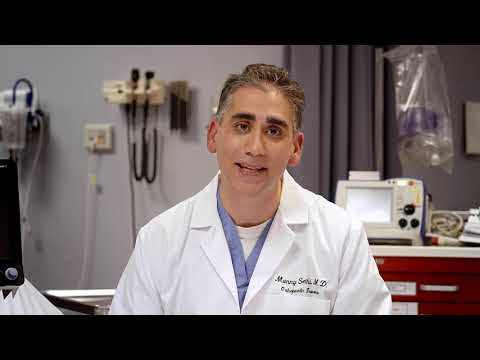 KINGSPORT — Nashville orthopedic trauma surgeon Manny Sethi admits he's never run for political office in his life, but believes he would make a good fit for Tennessee in the U.S. Senate.

Sethi, who's branding himself as a conservative Republican outsider, is running for the seat being vacated by retiring Republican Lamar Alexander. No other Republican, including former Gov. Bill Haslam, has announced their candidacy in the 2020 Senate race.

Among his accomplishments, Sethi created a nonprofit called Healthy Tennessee.

In an interview at the Times News, he addressed these questions:

Why are you running?

"I grew up in Middle Tennessee in rural Coffee County. My parents were legal immigrants from India. I came to Hillsboro, Tenn., when I was four years old. My parents were among the first doctors. My mom was the first OB-GYN (obstetrician/gynecologist). Ninety percent of the people lived below the federal poverty line. There weren't even ambulances in the town when I got there. My dad never took money from patients. He always said, ‘It doesn't matter what's in your bank account. What matters is the difference you make.' I lost my dad when I was a young man, and that got me to thinking about what I wanted to do and the difference that I make. I worked for (former Tennessee U.S. Sen. and physician) Bill Frist and saw the power and impact a surgeon could have in the United States Senate. As a trauma surgeon, I see life and death, and what I realize is life is like a candle. You have to make the most difference you can in the time you have. For me as a trauma surgeon, I feel like I'm doing that day by day. I’ve been all over Northeast Tennessee taking care of thousands of patients, but I think with this opportunity, an open U.S. Senate seat, there’s a generational chance to make change. I just want to make a difference.”

What are some of your key issues?

“Right now, I think health care is in a mess. I think you’re paying more for less. I think Obamacare has failed us. The problem is the conservative movement and Republicans have not offered a viable alternative. I think I’ve got that. I think it revolves around three things. One is the idea of an individual insurance market is very powerful. I think what we need to do with these large employer-based companies is say to them, ‘Look, instead of going to these big tent insurers, why don’t you give your employees the money and put it in their health savings account and let them buy their own insurance?’ I think we need to get rid of the essential health benefits. I think if you had the ability to buy across state lines, you would create a powerful insurance market where you would be paying lower premiums, lower deductibles. We could innovate more and let people focus on prevention. You’ll increase access and decrease cost.”

“What’s facing Tennessee and the country is this opioid crisis. It is the HIV crisis of our time. As we’re tamping down on the prescription drugs, there’s this awful comeback of fentanyl, meth and heroin pouring across our southern border. I’m a fan of the wall. I support the president. I think he’s doing a great job. This is an issue where everyone has kicked the can down the road. Health care, immigration and the opioid crisis are things Tennesseans want to hear about. They are sick and tired of career politicians telling them one thing and doing the other. We have to change the direction of where we’re headed.”

Concerning Ballad Health, what do you see as the federal government’s role regulating it?

“I believe in a free market system. I think when any entity thousands of miles away tries to regulate it or put in rules, it’s negative consequences. With Ballad, the genie is out of the bottle. They’ve made this decision. The merger is happening. Let’s see how it plays out. I have heard multiple people have concerns.”