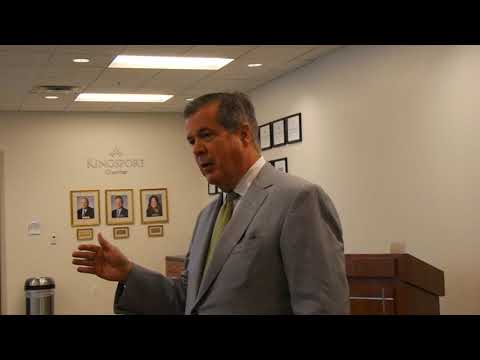 
Dean pushes back against GOP attack

"Karl Dean talks about the importance of transparency but willingly spreads misinformation in his ads," Tennessee Republican Party Chairman Scott Golden said of the ad in an email.

Dean has used the issue of rural hospital closings to make his case for Medicaid expansion, which Republican nominee Bill Lee opposes.

Dean, after a Kingsport Chamber meet-and-greet one day following his Kingsport debate with Lee, noted the ad has a film clip from a Nashville TV station reporting on the issue. The Tennessee Hospital Association claims there have been 10 rural hospital closures.

“I’m assuming that was accurate,” Dean, Nashville’s former mayor, said of the TV report. “You don’t want to be a bean counter about this. The issue is: Are there rural hospitals closing in Tennessee? The answer is yes. Is there a decline in medical services in Tennessee? The answer is yes. The next more important question is what are you going to do about it? I have offered a solution and idea and the other side has not.”

A Tennessean newspaper fact check of the ad suggested three of the affected communities went through a merger or ownership change, while two changed service offerings.

Dean also answered these questions at the chamber:

Do you favor gun control?

“I very much support the Second Amendment. … I think you have to be very much aware of what you can and cannot do. I am supported by Mothers For Gun Safety. … What they are asking for are some pretty fundamental things: Carry your guns the right way and make sure people are safe. I think there needs to be a discussion and this is what I’d start with … about how we keep guns out of the hands of dangerous people. … To me, that is people with criminal records, who have domestic violence situations, mental health situations. … Can we do that? I don’t know.”

Do you favor teachers having firearms at school?

“I haven’t talked to a teacher who wants to carry guns. I think it’s a safety issue. I am definitely not for students carrying guns at universities and colleges. … I don’t believe we need to be a state that passes what I call permitless carry that’s called constitutional carry.”

What did you think of the federal raid on a slaughterhouse in Grainger County?

“That was a federal decision, and immigration law is federal law. They will enforce the law and there’s going to be these negative ramifications or things that appear to people as being hard, but that’s the law. … This is where D.C. has really failed us. It is not supplying immigration reform, and it is not supplying leadership on the issue.”

Are you trying to emulate former Gov. Phil Bredesen, who was viewed as a successful governor?

“I certainly have an admiration for Gov. Bredesen. I thought he was a great mayor of Nashville and a great governor … but I’ve always been a moderate and someone willing to listen. … As mayor, you make decisions based on what’s best for the city, not what’s best for the (political) party.”

“It was fantastic and went very well. I think you can have civil discussions in politics, and clearly it’s appropriate and actually needed to talk about the differences in the positions you take on issues.”

The debate drew about 1,400 people at the Toy F. Reid Employee Center at Eastman.