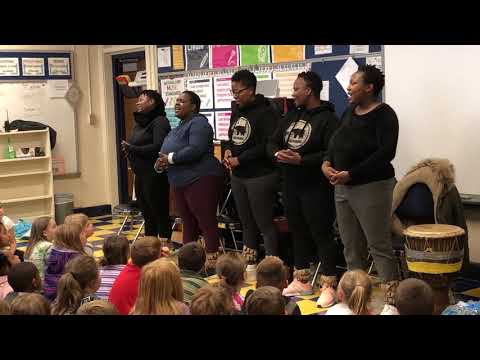 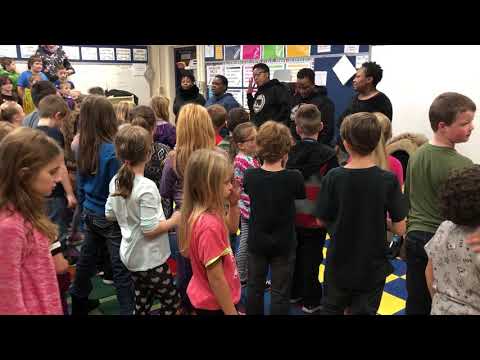 KINGSPORT — Roosevelt Elementary School students got a dose of music from Bulawayo, Zimbabwe, this week via Nobuntu, an acclaimed five-part a cappella ensemble from that African country. They also got to sing along with the all-female group.

Second and third grade students spent about an hour with Nobuntu, listening to the group sing as well as singing, snapping and clapping along with them and asking questions. Nobuntu’s performances, including one Tuesday night at Central Baptist Church in Johnson City, are a fusion of traditional Zimbabwe-rooted music, afro-jazz, gospel and crossover with minimal percussion and some dance movements. One of the songs Wednesday morning at Roosevelt was a lullaby.

The ensemble won Outstanding Imbube Group in the inaugural 2017 Bulawayo Arts Awards and was nominated for Best Musician of the Year at the Zimbabwe International Women Awards in 2015, held in London. The video from “Narinia,” their lead single from their second album, EKHAYA, become the No. 1 Zimbabwean music video on DSTV’s Zabezie Magic TV. That song was on the Top 10 there for more than four weeks.

The ensemble’s members are Duduzile Sibanda, Zanele Manhenga, Heather Dube, Thandeka Moyo and Joyline Sibanda. Nobuntu was brought to the Tri-Cities by the Mary B. Martin School of the Arts, established at East Tennessee State University in 2008 with an endowment from James C. Martin after his wife, Mary, died. Both were Eastman Chemical Co. employees.

As for the genesis of the visit to Roosevelt, Susan Lachmann, a counselor who works at Roosevelt, suggested the school for an outreach visit Wednesday before the group headed to Knoxville to catch a plane to Pittsburgh. In a few weeks, the group is scheduled to visit Poland, which will mark the 13th country in which the ensemble has performed. Lachmann is a former music and arts teacher but does one-on-one counseling with students through her employer, Camelot.