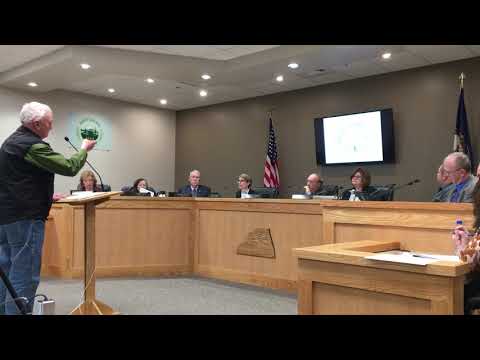 GATE CITY — After a two-hour public hearing, the Scott County Board of Supervisors on Wednesday denied a special use permit application to build a mini storage or flea market in Weber City.

The application, submitted by Peggy Harless, proposed locating the business on Mimosa Drive near the state line, in an area currently zoned for agricultural/residential use.

Harless hoped to rezone four parcels of land for commercial use but faced opposition from the Planning Commission, the owner of a nearby trailer park, and 50 nearby residents, who signed a petition against the application.

“They’re looking to put a commercial building right in the middle of a residential community,” said Stan Jennings, owner of the trailer park. “I don’t think it fits … and evidently, the Planning Commission didn’t either.”

In August, that application went before the Planning Commission, which makes zoning recommendations to the BOS. The commission recommended that the supervisors deny the application, noting that Harless did not have an engineer at that time to present concrete plans.

Harless then submitted a new application and went through the entire process again, this time with engineering plans and with only two business types in mind: a mini storage and flea market. In December, the Planning Commission again voted not to recommend the project, and the BOS was tasked with making a final decision at this month’s meeting.

At Wednesday’s meeting, Harless and her engineer, Steve Wilson, recapped her plans for the project and addressed two of the biggest concerns brought up by opponents of the project: water runoff and the impact of extra traffic on the road. Because it is a private road, Mimosa Drive is not maintained by VDOT and is in poor condition, but Harless argued that “the road is already a problem” and would not be affected by her business plans.

Jennings expressed concern that building a business in that location would create runoff that would flow into his trailer park. Harless said the engineer addressed that issue in his plans.

“The people here they don’t want change, but change is good. Growth is good, and we have needs in the community. I’ve had two or three people say that they would rent a unit just because it’s convenient and they’re in the trailer park,” Harless said of the mini storage. “They’re just wanting to declutter their house, and they asked me what my sizes were and prices. I’ve already got people interested in them, like right across the street.”

Jennings, along with nearby residents Trista Roberts, Arlene Fox, Donald Haskins and Ralph Wiggins, spoke Wednesday in opposition to the application. Most of the residents mentioned noise as a concern.

“I moved there 10 years ago because I wanted to be in a country setting. It’s quiet and peaceful … and that proposed thing is directly across from my trailer,” Fox said. “I will have no peace in my neighborhood, and that will upset me quite a bit.”

The BOS voted unanimously to deny the application, citing the condition of the road, the Planning Commission’s recommendation and the petition as determining factors.

Supervisor Darrel Jeter said, “With all the neighbors and all the signatures that’s against it, I can’t see how we could go against the people that live there and the Planning Commission.”