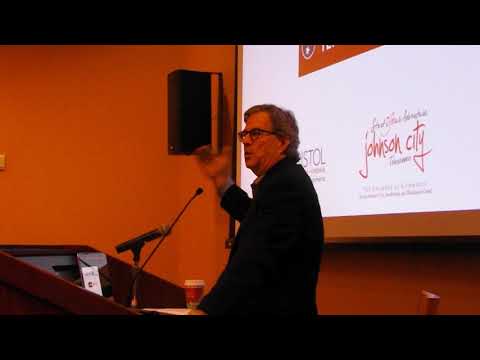 KINGSPORT – Journalist San Quinones has been helping people see through the lens of the opioid epidemic during his travels across America over the past three years.

Quinones, the author of “Dreamland: The True Tale of America’s Opiate Epidemic,” gave a “Book Club Discussion” about the crisis to a packed Cumberland Amphitheatre at the MeadowView Marriott on Monday.

About the “Dreamland” book

Quinones, a former Los Angeles Times reporter, weaves together two classic tales of capitalism run amok — the unfettered prescribing of pain medications during the 1990s plus a massive influx of cheap black tar heroin originating from one small county on Mexico's west coast.

Quinones, who lived for 10 years as a freelance writer in Mexico, said he initially set out to write a story about drug trafficking.

“I know Tennessee has had a really tough time with this stuff, … but it’s all over the country. … I’ve been to Utah, I’ve been to Vermont, New Hampshire … Oklahoma,” Quinones said of the opioid epidemic.

What’s the current status of the opioid epidemic?

“The impact of this is so real and to many people (it’s) invisible,” Ballad Health Executive Chairman, President and CEO Alan Levine said of the opioid epidemic. “And so here’s a passion in this region about alternatives for this problem. … it doesn’t distinguish between income or whether you are white, black or Hispanic.”

Contributors to the epidemic, Quinones said, have been “the revolution in pain management,” patients feeling like they are entitled to lives free of pain and viewing their physicians as “auto mechanics,” plus aggressive drug industry representatives who felt the best way to influence the physician was to buy the staff lunch.

“Get staff on your side and the doctor will be putty. … In the end, marketing worked,” Quinones noted. “There was a saying of ‘Always be closing.’”

Quinones also pointed out people have become isolated, listen to “toxic” 24-hour cable news and no longer take part in their communities.

How will this epidemic end?

“The good news is there is no solution (to the epidemic). … It’s time to stop believing there is an easy way out. … People ask me ‘What’s the solution, Sam?’ I got no idea,” Quinones stressed. “ … Remember, too, that your efforts will probably not be recognized the way they should because real change in life comes incrementally. … I think in the end, your towns will thank you … your country will thank you.”