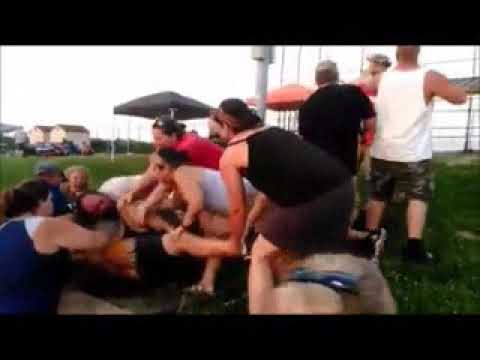 KINGSPORT — Tempers flared at Brickyard Park Saturday and a brawl broke out between the parents of two out-of-town girls softball teams. The short-lived scuffle took place during a tournament with a half-dozen men throwing punches and rolling around on the ground.

In the aftermath, no injuries were reported, no one was arrested and both teams were disqualified from the tournament.

“It’s a shame this had to happen,” said Todd McLemore, athletic program coordinator for Kingsport’s Parks and Recreation Department.

According to McLemore, the fight was between the parents and fans of two North Carolina girls softball teams — the East Wilkes Cardinal Heat and the Blue Ridge Explosion. The squads were participating in a 12 and under softball tournament sponsored by USA Softball, which had rented the fields from Kingsport.

“The Cardinals had won a game prior to this fight and they were supposed to play the winner of Blue Ridge and (another team),” McLemore said. “Apparently some spectators were very vocal towards the umpire calls in favor of Blue Ridge and it just got louder and louder.”

McLemore said some Blue Ridge parents then went over and had a verbal confrontation with some Cardinals parents. Then someone got pushed down a sloped area near field one. A parent from Blue Ridge then retaliated.

“And then all chaos broke out,” McLemore said.

Bryan Sayers, who hails from Southwest Virginia, captured most of the fight on video and posted it to Facebook Saturday night. It went viral, garnering hundreds of comments and more than 340,000 views in less than 48 hours.

“They should be ashamed of themselves. Putting your kids through trauma such as this ... shameful!!!” posted Anne Manis.

“This is absolutely disgusting! A group of adults acting like total idiots in front of these kids ... No wonder our younger generation has no respect for anyone or anything!,” commented Dale Halcomb.

“The kids are the ones that are suffering,” posted Marisha Bloomer Roberts.

The fight lasted only a couple of minutes before breaking up. Kingsport police responded and could not find anyone claiming to be a victim nor anyone needing medical assistance. No charges were placed.

Tina Gale, the regional director for USA Softball, said both teams were removed from the tournament and have been removed from future tournaments. The organization is investigating the incident, she said.

“I’ve done this for 10 years and never once had a physical altercation. This was the first and hopefully the last,” Gale said. “We run a very clean organization, we run good tournaments, but unfortunately it happened on our dime and we don’t take things like this lightly. We would never condone that kind of conduct.”

USA Softball has been running tournaments in Kingsport for at least five years. The tournament season runs from roughly March through July, and each October the city’s athletics advisory committee reviews all facility rental requests and votes to either approve or disapprove, McLemore said.

“Historically, my dealings with USA Softball have been nothing but positive,” McLemore said. “If it were my choice, they’re an excellent renter and I’d hate to see them go.”