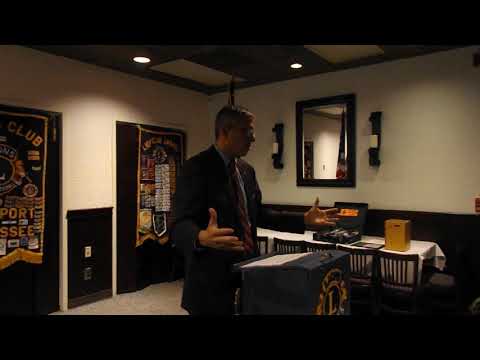 
Levine: 'If you have a mass casualty (incident), you can’t rely on one hospital'

KINGSPORT — If there were a mass casualty incident in Kingsport, the community would not want to rely on just one hospital, Ballad Health Executive Chairman, President and CEO Alan Levine told the Kingsport Lions Club Tuesday night.

“If you have a mass casualty (incident), you can’t rely on one hospital,” Levine told club members. “That’s the benefit of Ballad. We’re no longer three independently operating trauma programs. We’re a trauma system. … Holston Valley (Medical Center) is going to need Johnson City. It’s going to need Bristol. … What you’re going to have is the entire benefit of a $2 billion health system with 21 hospitals and all the resources that it provides to create a better system.”

Levine noted the issue has come up amid a 2017 explosion at Eastman and one at the Holston Army Ammunition Plant last week.

“You can count on one hand the number of people who actually came to the ER (emergency room),” Levine said of the incidents. “Thankfully, because of technology, there’s been a lot of improvement how Eastman and these other institutions manage themselves. So, thankfully, there weren’t any major injuries.”

He pointed out that Ballad Health is making new investments at Holston Valley, including a new CT scanner and two replacement cardiac cath labs.

“It is a critically important part of our system,” Levine said of Holston Valley. “We have no incentive but to do anything to help Holston Valley succeed and thrive.”

Physicians, said Levine, believe Ballad Health’s move to switch Holston Valley from Level One to Level Three trauma center status is the right thing to do.

“Of the five, we are talking about two, maybe three transferred to Johnson City that are major trauma,” Levine stressed. “Fifty percent of the trauma we see are 65 and older. Eighty-five percent of that trauma are geriatric falls.”

The healthcare system’s decision to close Holston Valley’s neonatal intensive care unit and move those services to Johnson City’s Niswonger Children’s Hospital was needed because of the volume of cases and declining births in Kingsport, Levine pointed out.

“This entire region is better off, all of us, whether you live in Kingsport; Norton, Virginia; Abingdon, Virginia; or Johnson City because of the merger of Wellmont and Mountain States,” Levine insisted. “All of these hospitals are incredibly important parts of our healthcare system. We have nothing short of the best of intentions for making these hospitals thrive.”