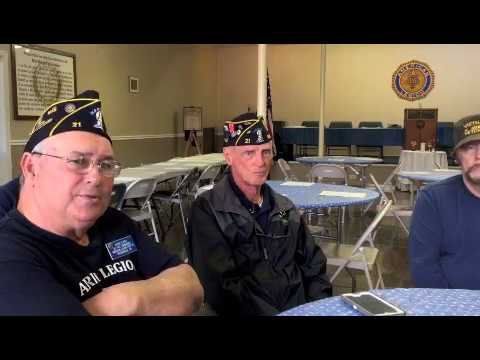 ROGERSVILLE — Members of Rogersville's American Legion Post 21 will be celebrating their centennial in a few years, and they hope to be doing that in their current facility perched on a hill above East Main Street on the eastern outskirts of Rogersville.

But with structural problems such as a roof in bad need of replacement and dangerously outdated electrical wiring, there's a distinct possibility that the American Legion will have to vacate its current facility of almost 70 years at some point before that centennial arrives in 1925.

Former Post 21 Commander Raymond Hice noted that from the outside the building looks fine.

"It's the guts of the building that's not (in good shape)," Hice said. "It's got 1949 wiring in it, so we've got wiring issues. We've got roof issues. Plumbing. Windows. Stuff that costs a lot of money. We closed down the upstairs because we have worse wiring issues upstairs than downstairs."

Hice added, "Rogersville Playhouse had leased it, and they were paying $450 per month rent, which helped offset some of the expenses we had down here. But they left, and that's vacant, and we feel it's unsafe because of the wiring issues and there aren't enough fire exits."

About six years ago, a building inspector estimated that the Post 21 building needed about $450,000 in repairs, a figure that is probably outdated and low now.

That's a tall order for an American Legion Post that only has about 300 members, whose $40 annual dues go mostly to the state and national organization. The local post receives only $9 per year from each member.

Post 21 1st Vice Commander Dennis Elkins told the Times News recently that they could probably get the building up to code with a new roof and wiring for closer to $150,000.

But considering their limitations, that still seems like an insurmountable figure.

Post 21 was founded in 1925 under the leadership of Pressman's Union president Col. George Berry at Pressmens Home, but it moved to its current location near the intersection of Main Street and Rt. 70N on the eastern edge of Rogersville after World War II.

The first Main Street Legion Hall was called "The Hut." It was located on the spot where the Post 21 deactivated tank "Old Hickory" now sits.

The Hut was a center of cultural activity for Rogersville, but with an influx of returning WWII veterans it was soon too small, and in 1949 Hawkins County paid to construct the existing structure on that same property.

The property had been donated by a family for the sole purpose of being used as an American Legion post.

The deed states that if the property ceases to be used as an American Legion, ownership of the land reverts back to the heirs of the family that donated it.

The deed is a detriment to raising renovation funds

They're having a hard time finding contributors to help pay to renovate a building on property that the American Legion doesn't own.

However, if the facility isn't renovated within the next few years, especially with a new roof and electrical wiring, they'll be forced to vacate the building, and they'll lose the property for good.

The core of the problem is a lack of new membership

Elkins sees Post 21's main problem as being unable to generate new membership, which affects the bottom line more than anything.

Since 2012, Post 21 has hovered around 300 members, the majority of whom are Vietnam-era veterans and are about 70 years old.

They don't always have the energy they had 20 years ago, and as they get older and numbers continue to dwindle, fundraising problems will only increase.

For Post 21 to survive, Elkins believes the younger generation — Gulf War-era vets up through Iraq and Afghanistan, are going to have to step up and take the baton.

Teaching younger veterans what the American Legion is all about

Elkins believes one problem may be that the younger generation doesn't understand the American Legion’s mission. It’s about giving, not receiving.

“We've been on the phone trying to get membership, and the first question some of them ask me is, ‘What do you guys have to offer?’ ” Elkins said. “My philosophy is, it shouldn't be 'What do you have to offer me?’ It should be, 'What can I offer you guys, to carry it on?' "

"Someone is going to have to carry on the Post at some point in time," he added.

American Legion Post 21 is all about veteran and community service. Just a couple of their projects include supporting the local Boy Scouts and NJROTC programs and sending four boys and one girl to Boys State every year.

The mission of Post 21 is to support the Four Pillars of the American Legion: Veterans Affairs and Rehabilitation, National Security, Americanism  and Children and Youth.

"We have programs that support each of those pillars, and that money comes from us," Hice said.

What can the general public do to help?

Short of donating money, the public can also help by renting out the Legion hall for events. Any revenue Post 21 generates is a step toward keeping the doors open.

The obvious short-term solution is to get the electrical issues repaired and put on a new roof. That will allow them to begin renting the upper floor again and generate additional revenue from there as well.

"I'd like to see somebody with a lot of money, and don't know what to do with it, and would like to help veterans," Hice said. "If somebody could bequest something, as a memorial to remember their loved one or something like that."