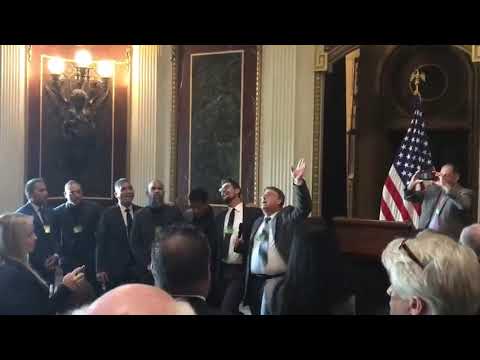 SURGOINSVILLE —  When the Rev. Brian Burchfield was invited to the White House as part of an initiative of the Tennessee Pastors Network, he was honored to be among about 50 in the group.

Vice President Mike Pence came into the room for the event, and President Donald Trump was in the building.

But when Burchfield, a Hawkins County native and resident, gospel singer, songwriter and evangelist, got to sing “Amazing Grace” and found out the Facebook video of part of the Oct. 23 event  had received more than three million hits, he was astounded.

Gospel performers Jason Crabb and The Katinas also sang at the event, which the pastors attended by riding a bus to Washington, D.C.

The event was held to herald the release of American pastor Andrew Brunson from a Turkish prison after two years and to give the visiting pastors information about faith-based initiatives of the Trump administration.

HOW DID THE TRIP COME ABOUT?

Burchfield, who lives near Surgoinsville and graduated from Volunteer High School, said the Rev. Dale Walker, Sparta-based president of the Tennessee Pastors Network, initiated the trip to the White House for preachers, evangelists and ministers across the state.

“It was a faith-based meeting,” Burchfield, of Brian Burchfield Ministries, said of the event in the Eisenhower Room.

“I had no idea” the video would go viral, he said.

The Rev. Ronnie Phillips of Abba’s House in Hixson, near Chattanooga, took the video.

Burchfield said he got to see Mike Beatty, director of the U.S. Department of Agriculture Center for Faith-Based and Neighborhood Partnerships, and remembered him from performing in Beatty’s church in Georgia.

After Burchfield sang “Amazing Grace” and “Praise God,” Crabb sang “I’d Rather Have Jesus” and then they and The Katinas performed together.

Burchfield said Pence came to the event and that he was told Trump was in the Oval Office and heard the music. The pair had just gotten back from a rally in Texas, Burchfield said.

“They’ve already asked us to come back,” Burchfield said, although no date has been set.

He said he hopes to work out a visit when he is in Washington for a scheduled cancer treatment and check. He said tentative plans are for a return visit in December and for a February prayer breakfast. He said he couldn’t publicly share detailed information about the first visit or subsequent one beforehand because of security concerns.

“It is a wonderful blessing that we have President Trump and an administration that truly cares about the Christian faith community and recognizes the critical role that churches and pastors serve in their communities. Churches and pastors truly have a tremendous opportunity that we must seize while the door is open to Christian faith in this troubled nation,” Walker said in an email.

“The pastors from Tennessee heard from directors of Centers for Faith-Based Initiatives from different departments within the federal government,” Walker said. “The meeting broke out into ‘real church’ after Brother Brian Burchfield ... went into ‘Praise God, Praise God’ lifting his hands up in holy worship of God at the White House.”

Walker said Brunson “reminded us of the persecuted Christians around the world. Thank God we have the freedom of worship in this great nation ‘under God.’ The secular culture has tried to silence the church and we will not be silenced.”

Walker said also a “major emphasis was placed on the opioid addiction crisis and the crisis has deeply affected Clay County and Celina,” where he pastors.