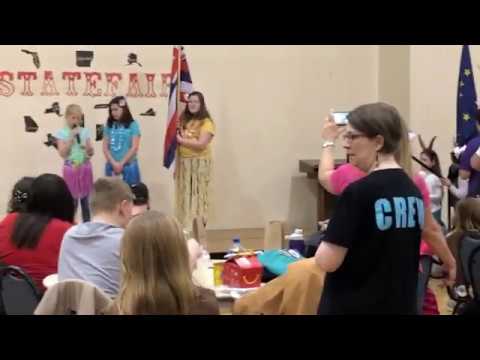 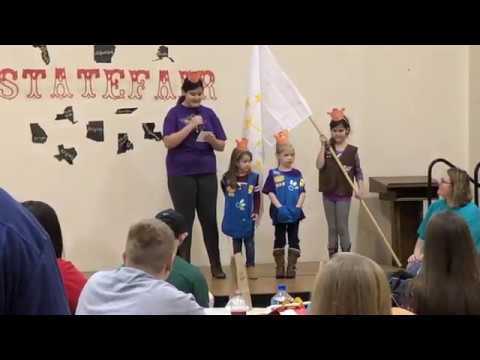 KINGSPORT — What do you get when you mix about 150 Girl Scouts, a rainy Saturday afternoon in a church gymnasium, food ranging from beignets of Louisiana to the Moon Pies of Tennessee to Texas chili, trivia facts about 12 states and fair-type games?

That would be the Girl Scout State Fair, put on by the Holston River Service Unit of the Girls Scouts of Southern Appalachia.

Girl Scout troops from the Kingsport, Gate City, Blountville, Mount Carmel and Church Hill areas set up displays on 12 states plus the fair games in the gym of St. Dominic Catholic Church. Event organizer Jessica McCain, administrator of Troop 425 in Gate City, said 14 troops were involved, with 12 putting on displays about the states and two others, including hers, helping out with the games and other logistics.

The 12 states, in order of presentation in the Parade of Flags, were Texas, Hawaii, Alaska, Rhode Island, New York, Virginia, Arkansas, Arizona, Tennessee, Louisiana, Florida and Georgia. Trivia tidbits included that Hawaii has its own time zone and no daylight saving time and that Rhode Island is home to toymaker Hasbro Inc.

“I think that the most interesting thing I learned about Texas was its nickname is Lone Star because there’s only one star” on the state flag, said Akiera Templeton, a member of Troop 475 of Blountville and a fifth-grader at Indian Springs Elementary School. She’s been a Scout for four years and said her favorite thing about the Scouts is “just hanging out with friends and getting to go to the summer camp.”

Local Girl Scouts each year hold either the State Fair or an International Tea, with troop displays about individual states this year being replaced by ones about countries of the world next year, McCain and other Girl Scout leaders said. However, McCain was speechless when the group sang an impromptu “Happy Birthday” to her because Sunday is her birthday.

Among the popular food items at the state displays were the beignets, or fried French Quarter pastries, given out by Emma Earles and other members of Troop 166 of Kingsport, as well as chili in the Texas booth operated by Troop 475 and samples of Moon Pie, made in Chattanooga, in the Tennessee booth of Troop 447 of Church Hill.

The event started at 1 p.m. with the opening ceremony and Parade of Flags, with 12 troops marching into the gym carrying state flags. Then, each group presented some facts about the state they chose to represent. Afterward, attendees could buy tickets and exchange those for food items in the booths, a plate and plastic utensils or to play games for prizes.