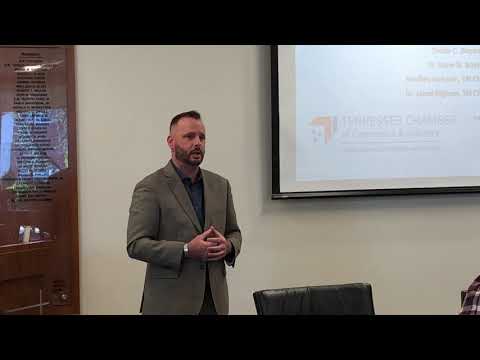 
Want to work for Eastman some day, K-12 students? Free school lesson plans on the way

KINGSPORT — Students, are you considering a career with Eastman Chemical Co. or the Domtar paper mill in Kingsport when you grow up? There’s about to be free lesson plans for those and other local employers available to be embedded in a local public school system.

A group of Kingsport City Schools teachers and administrators got a look Thursday at Tennessee Career Awareness and Preparation System (TN-CAPS), a new career portal that will provide lesson plans tailored to local business and industry. KCS is the only Northeast Tennessee participant in a six-school system pilot program Tennessee is launching in partnership with the Tennessee Chamber of Commerce and Industry. It will launch next year statewide in a program initiated with the help and support of Gov. Bill Lee.

During a roll out and training session on the web portal, online and open to the public at www.tncaps.com, held at the Kingsport Chamber of Commerce, Jared T. Bigham, senior adviser for workforce and rural initiatives for the Tennessee Chamber, explained the concept to a group of industry, business and Kingsport school teachers and other KCS officials. He has a doctorate in education.

WHY IS KINGSPORT AMONG SIX SYSTEMS IN PILOT?

Bigham said KCS input and that from six other systems will be crucial to the success of the program. The others are Rutherford County in Middle Tennessee, Hamilton County in the Chattanooga area, Cleveland City in the southeastern part of the state and Collierville  and Jackson-Madison in West Tennessee. He said the six were chosen because of their past willingness to do innovative things and active support of the local chamber of the local school system.

“It’s going to be statewide,” Bigham said. “All school districts have access to that portal. It’s a free portal.” The difference, for now, is that Kingsport and the five other pilot program systems will have lesson plans on the portal.

“There’s actually lesson plans for Eastman Chemical and Domtar,” Bigham said. He said those are based on current and projected future needs of skill sets for employees. In addition, the program covers grades K-12 and integrates Tennessee academic standards.” An English teacher could use one of these lessons in third grade and not be deviating from the curriculum.”

WHAT WILL MAKE THE PROGRAM A SUCCESS?

“This is the passion, purpose and possibilities,” Moorhouse told teachers shortly before they began the presentation of the online portal. He said he envisions the program as helping “that kid” understand the practical applications for the math he or she is trying but struggling to learn, something Moorhouse said he struggled with as a teacher.

Moorhouse said aside from state and chamber support, the involvement of local industries will make the program a success.

Lora Barnett, executive director of government relations and workforce development for the Kingsport chamber, said representatives from Eastman, Domtar, Brock and Silgan Closures, all with operations Kingsport; Myake Forging and Cooper Standard, both in the Phipps Bend Industrial Park near Surgoinsville; and Partha Industrial in Piney Flats attended the Thursday meeting. So did Lynn Tully, Northeast Tennessee regional director for the Tennessee Department of Economic and Community Development.