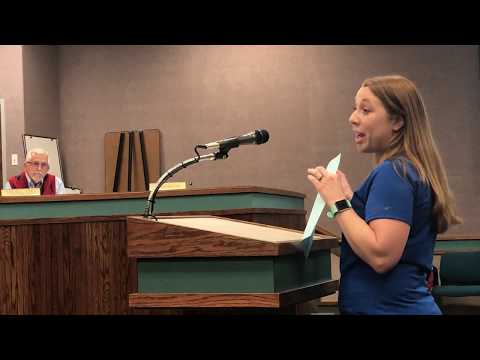 BLOUNTVILLE — Sullivan East Middle School, the first new Sullivan County school to open since 1980, got off to a great start Tuesday after an open house Monday, school system officials said.

However, a mother of three gave an impassioned plea about transportation snafus at the Board of Education meeting Thursday night.

Samantha Mooneyham of the Bluff City area has three children in county schools, one each at Sullivan East High, Sullivan East Middle and Bluff City Elementary. She and other parents who attended the BOE meeting but declined to be identified publicly said they’ve had transportation issues.

Those include Mooneyham having her fourth grade son late to school and getting a boss to delay her start time at her job in Kingsport so she’d have time for her children, especially the younger two, to get to school without getting up before 6 a.m. to catch a 6:20 bus. Last school year, she had two in elementary school and one in middle school, who all rode a later bus.

“Before this (school opening Tuesday), that was a building. When kids came and started learning, it was a school,” Director of Schools David Cox said during a a 5 p.m. work session.

WHAT WAS MOTHER’S COMPLAINT?

At the 6:30 regular meeting, Mooneyham spoke out about issues with transportation at the school. She said it is not reasonable to have her 12-year-old middle school daughter on a 10-hour day because of an early bus pickup. However, after leaving at 7 a.m. to take her son to East High and her daughter to East Middle, Mooneyham returned home to take the elementary son but was late and then couldn’t get to work in Kingsport on time. She said her husband works away from home during much of the week.

“Before I ever get to work, I’ve been driving two hours,” Mooneyham said.

She also said she feared for special education students having their schedules disrupted and students having good but different style math teachers in mid-year. She said the middle school will help her younger son eventually but that children are “paying the price” with the disrupted schedules. “I know you guys are doing the best that you can,” she said.

East Middle is a consolidation of Bluff City and Holston Valley middle schools and the middle school portion of the K-8 Mary Hughes. While all other county school students returned Monday, East Middle students did not return until Tuesday.

BOE Chairman Michael Hughes said school officials worked and will continue to work to remedy what they can and plan to do a better job communicating with parents before and after a new school opening in similar situations in the future.

Hughes said he is glad to get parent feedback about the startup issues with East Middle and wished more parents would care enough about their children to attend and speak at school board meetings.

WHAT WERE UNEXPECTED PROBLEMS?

“We expected problems. But there are some we didn’t anticipate,” Hughes said. “It looked like an army going to work that morning.”

Hughes said a larger-than-expected number of parents who drove their children to the school, about 380, caused gridlock Tuesday, and some bus drivers were confused about continuing on to Bluff City and Emmett elementary schools. However, he said employees responded by rerouting some parent cars to bus drop-off areas and that the number of car riders is expected to decrease over time. Although Hughes said 649 or so students were expected, the school is up to 656 and likely will reach 665 or 670, he said.

Other issues, school system officials said, included students who had never ridden the bus before awaiting the bus on the roadside, some in areas where buses had never run before. In addition, Bus 210 was overcrowded and will have its route split between two buses, and other routes will be tweaked, Hughes said.

He said these issues at East Middle will help school officials prepare for West Ridge High, which will open in August 2021 near Tri-Cities Airport. West Ridge will consolidate Sullivan North and South high schools and a portion of Central High, with the rest of Central rezoned to East High.