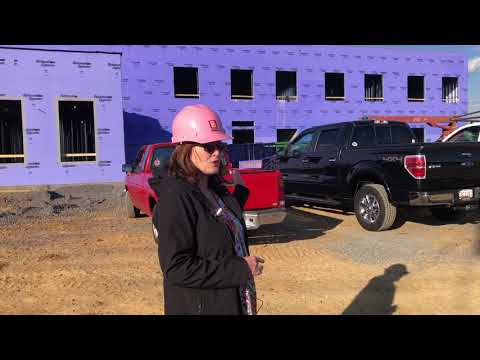 BLOUNTVILLE — After touring the new West Ridge High School construction site Monday afternoon, Sullivan County Mayor Richard Venable said he wants to come back and give the 24-member County Commission the same up-close look at the almost 300,000-square-foot school and its campus.

Director of Schools David Cox immediately said the commissioners have a standing invitation for such a tour, although architect Dineen West said in the near future it would need to be done in groups of no more than eight or 10 people at once because the project, set to open as a school in August 2021, is still an active construction site.

“It’s a bit overwhelming, the size of the site,” Venable, who requested the walk-through that occurred on a day with sunny blue skies but nippy temperatures, said near the end of the tour. “There would be a greater appreciation for the design of the building if the folks could walk through.”

HOW BIG IS IT?

The school off Exit 63 of Interstate 81 sits on a tract of about 115 acres, including its West Ridge namesake behind the school, and will actively use about 80 acres. J.A. Street General Contractor is the main builder while Goins Rash Cain Architects, where West is the principal architect, and LSP3 are the architects for the more than $65 million project. West led the tour through what will become the front entrance, which will have a secure area with administration to the right and health occupations classes to the left.

Robotics labs after that will have mostly glass walls and a skylight in a two-story hallway will provide natural light. A ramp to the rear of the building leads to a gym to the right, a cafeteria in the middle and an auditorium. Upstairs, a media center or library will have a staircase descending to the first floor and leading to the cafeteria.

“The concept of a media center is not a quiet learning area. You can talk and have little study groups,” West said on the tour.

“We’re still on track for the fall of 2021,” West told reporters during an impromptu news conference before the tour. She said brick soon will begin to go up on parts of the project. Aside from the media, Board of Education Chairman Michael Hughes and Vice Chairman Randall Jones, Cox and West walked through the building and then walked over to the football field.

“When the Interstate (81) traffic is driving along, you’ll be able to see Friday night lights,” West said of the football field.

Visitors will sit with their backs to the interstate, while the home stands will be on the other side. Hughes said although plans and the budget call for a live-grass field, that issues might be revisited. West said that decision would need to be made by the spring.

WHAT ELSE MAY NOT BE THERE?

The school has less-than-optimal access via the windy two-lane Lynn Road, but Venable predicted traffic-flow improvements would be in place when the school opens. West said the building portion of the site has had no sink holes but has developed some drop outs from rain runoff during construction.